Marco Rubio's trickle-down nonsense: Tax cuts for the rich make sense because his father was a bartender!

His tax plan will make the rich richer and worsen inequality, but his dad was working-class so it's okay 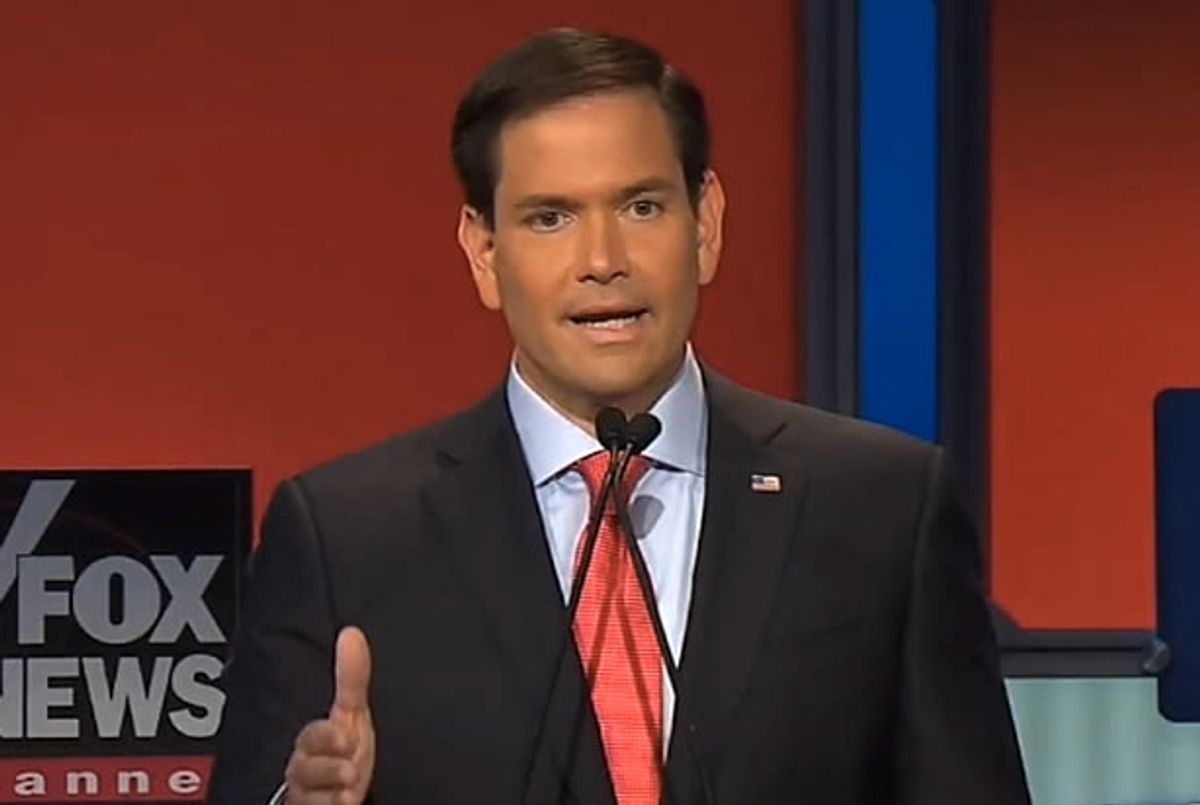 If you’ve paid any attention to Marco Rubio at any point over the past five years, then chances are pretty good that you know that his father worked as a bartender. It’s a biographical detail that Rubio slips in pretty much every time he utters a word in public. He mentioned it in his 2013 State of the Union response, his speech announcing his 2016 candidacy, and his closing remarks at the first GOP debate. Rubio’s frequent retellings of parents’ stories (the non-exaggerated parts, anyway) are an integral part of his everyman appeal -- as Rubio himself put it on the debate stage, “the journey from the back of that bar to this stage tonight, to me, that is the essence of the American dream.”

And, conveniently enough, it turns out that Rubio’s father’s humble employment story can also be used to justify his wildly regressive tax policies.

Rubio sat down with CNBC’s John Harwood, who asked the senator to explain how his identification with and professed concern for the middle class square with his tax plan, which showers the wealthy with tax cuts beyond their wildest dreams. It all makes sense, Rubio says, because his father was a bartender:

RUBIO: Well, first of all, capital gains and dividends is investment. That means someone is taking money they have access to and investing it in something. That's how jobs are created.

What a novel argument – give the wealthy investor class a huge tax windfall, and the benefits will… what’s the mot juste here… trickle down to the bartenders and other wage earners in the form of economic growth and jobs and so forth.

This is a slippery bit of politicking on Rubio’s part. His proposed tax reform – zero percent rates on capital gain, dividends, and estates – would benefit the rich almost exclusively. As the Washington Post’s Matt O’Brien noted, eliminating taxes on capital income would give middle-income Americans a $66 tax cut, while the top 1 percent would get upwards of $60,000, and the top 0.1 percent would pocket a cool $400,000. The Center for American Progress points out that “the top 0.0003 percent of all 140 million individual income tax returns filed in 2009… claimed a full 12 percent of all capital gains that benefit from reduced tax rates.” There is no great mystery here – when you slash taxes on capital gains, you make rich people much, much richer.

This, in turn, widens an already yawning gap between the rich and the poor. Income from capital gains and dividends is far and away the biggest driver of income inequality. The worse income inequality gets, the more of a drag it becomes on economic growth. Democrats who are looking for ways to turn income inequality into an effective campaign issue should be salivating over Rubio’s tax plan and its potential to drive yet more distance between the wealthy and the rest of the country.

As for Rubio’s promise that cutting taxes on investment income will spark additional investment and foster economic growth, there’s not much reason to believe that’s true. It’s entirely possible that the beneficiaries of that tax cut will just pocket the difference. “Capital gains tax rate reductions… are unlikely to have much effect on the long-term level of output or the path to the longrun level of output (i.e., economic growth),” a 2010 Congressional Research Service report stated. “A tax reduction on capital gains would mostly benefit very high income taxpayers who are likely to save most of any tax reduction.” The Center for American Progress put it bluntly: “Reasonable economists can disagree about the theoretical benefits of low capital gains taxes, but the historical record is clear. There is no correlation between low capital gains tax rates and higher economic growth.”

Ever since he debuted this tax scheme of his, Rubio has been trying to pitch it as a boon to the middle class, and his father’s personal story and in his own working-class upbringing fit into that message. It’s nonsense. Rubio’s tax plan redistributes income up the economic ladder while blowing a hole in the budget and throwing a few crumbs to middle-income Americans.