The GOP vs. libertarianism: How the party jettisoned Ayn Rand for corporate fascism

While GOP once looked poised to embrace libertarians, the summer of Trump shows it's charting a different course 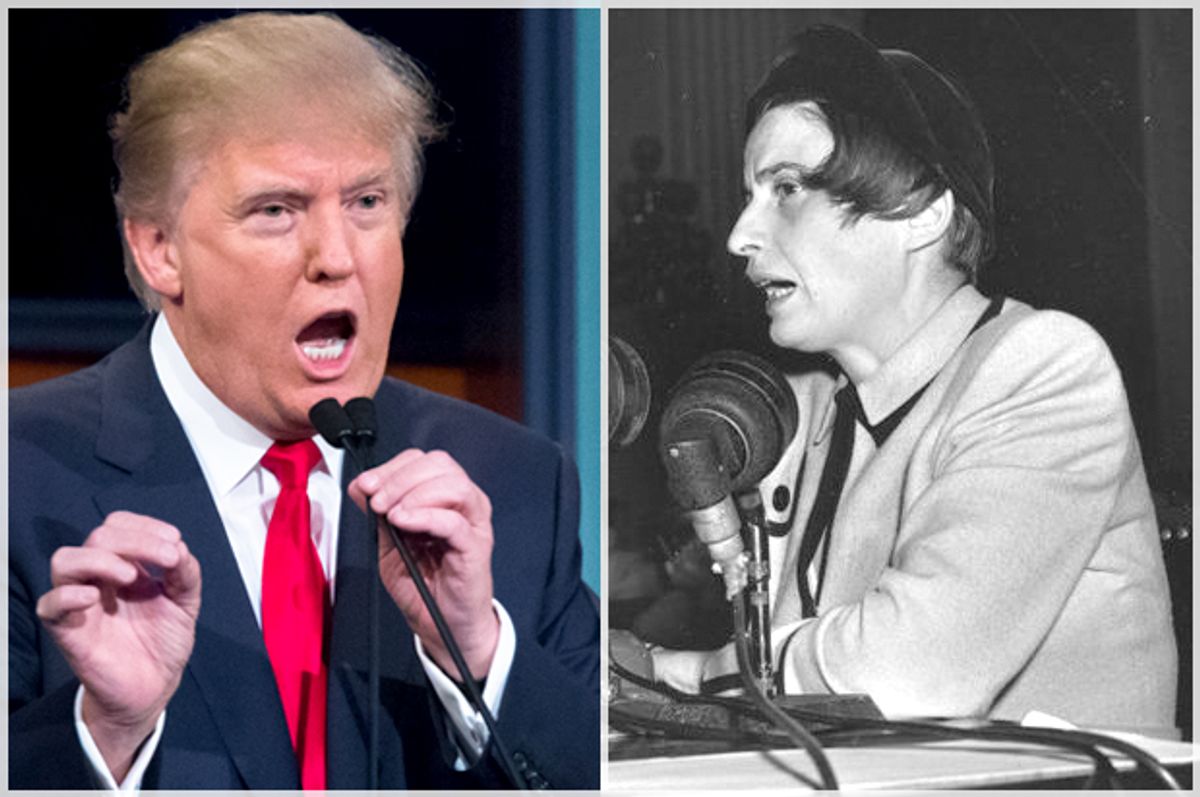 Not too long ago, it seemed like the Grand Old Party was set to become an increasingly welcome place for libertarianism. After years of enthusiastic Ron Paul presidential campaigns, his son Rand, a bit less hardline than his father, was for many people the most exciting candidate of 2016. For hopeful libertarians, the GOP was a pathway to the mainstream, and the success of the Kentucky Senator would determine how ready the party was to embrace the fringe ideology.

If I were a libertarian today, I would be seriously questioning that earlier optimism. Rand Paul’s sinking poll numbers have been well documented, and currently, he barely registers in the top ten. Meanwhile, Donald Trump, who is way ahead of everyone, is quite possibly the least libertarian of all the GOP candidates (except maybe Chris Christie, who called the bill of rights “hot air”). Just a few examples of how Trump is the polar opposite of a small government libertarian: Trump’s immigration plan would cost somewhere around $200 billion in taxpayer dollars and add about 10,000 new federal employees, he advocates aggressive protectionist policies, and he has been extremely hawkish in his foreign affairs rhetoric.

Social issues, though, seem to be the real deal breakers between GOP voters and libertarians. Unlike most of the Republican electorate, dedicated libertarians are usually liberal when it comes to social issues, and, like the left, are very critical of state violence. For example, they condemn foreign wars and the “war on drugs,” while supporting LGBT and minority rights (at least the rational libertarians, like the folks at reason.com). For the majority of GOP voters, this is unacceptable, and the dominance of “Trumpism” points to a strengthening white identity movement within the Republican Party. Whether you agree with libertarians or not (many of us on the left agree with them about half of the time, and find them grossly dogmatic the other half), you have to respect their commitment to what they believe in, especially when it comes to their criticism of state crimes, like the war in Iraq. When it comes to a demagogue like Trump, he doesn’t seem to have any kind of firm set of beliefs -- right, left or center -- and instead runs on a dangerous emotional appeal.

In many ways, the Republican Party as a whole has embraced everything dogmatic and dangerous about libertarianism, while shunning all of the values that actually make sense. The libertarian criticism of war and the military industrial complex, for example, is a sure way to earn heavy boos at a Republican primary debate. Criticism of drug criminalization will earn even louder boos. The GOP’s appetite for war seems to have only grown since the disastrous Bush presidency, and the presence of Trump has basically turned the GOP primaries into a competition to see who can spew the most outrageously xenophobic and nationalistic diatribe. As Matt Taibbi writes in his Rolling Stone article, “Inside the GOP Clown Car”:

“The combination of Trump constantly spewing crazy quotes and the strategy actually working turned his campaign into a veritable media supernova, earning the Donald more coverage than all of the other candidates combined. This led to a situation where the candidates have had to resort to increasingly bizarre tactics in order to win press attention.”

Meanwhile, the libertarian worship of the free market and its invisible hand is something that most Republicans seem to agree with (except for certain protectionist candidates -- you know who I’m talking about). When it comes to the economy, libertarians and Republicans agree that the government has no place in financial regulation, healthcare, environmental protection, and so on. This, of course, is largely because Republicans rely on funding from big corporations and billionaires, who benefit when the government gets out of their way. It’s no surprise that Scott Walker, the candidate whom the Koch brothers seem to like most, has been called the “most dangerous candidate on climate change.”

Still, the fact that the GOP electorate has embraced a kind of white identity politics based on a combination of nativism and nationalism does not bode well for libertarians. While libertarianism is a severely flawed and undemocratic ideology (with an ugly history of supporting autocratic regimes), and its religious-like faith in private industry is extremely dangerous, it is not an ideology of hate and intolerance, as is “Trumpism.” It is a misguided ideology, sure, and it should be aggressively opposed by anyone with progressive ideals, but there are certainly some good values and ideas promulgated by libertarians.

The modern GOP has accepted all of the bad and thrown out all of the good. While it supports the freedom of corporations to destroy the environment or pay workers as low as they can, it opposes individual freedoms, whether it be a woman's right to have an abortion or a gay man’s right to marry. The GOP is fine when big corporations and billionaires are free to bribe politicians, but when poor people and minorities want the right to vote, this is problematic. Basically, they support all of the Darwinian aspects of capitalism, but despise the individual freedoms that capitalism is expected to bring, especially when it comes to the freedoms of non-white, poor, female, or LGBT people.

Of course, the laissez faire economy that libertarians propose would also end up crippling individual rights, even though it is not based on any kid of ideological hatred or intolerance. If it had been up to libertarians, none of the safety measures for workers or consumers, environmental/financial regulations, social welfare programs, or any other government programs advanced for the community, would have ever come about. To libertarians, the sacred invisible hand would have eventually dealt with all of society's ills (because, you know, consumers are so rational and moral in their consumption).

In any other case, the inability of libertarianism to reach the mainstream would be cause to celebrate -- but the GOP has simply become a political Frankenstein; a mingling of the most dogmatic of libertarian values and the nationalism and nativism that we see in Trump and religious conservatives. Republicans have embraced all of the extremist beliefs from each faction on the right: the unfettered free market of libertarianism, the intolerance of the religious right, the war-mongering of the neoconservatives. It has become, more or less, the party of corporate fascism, and there are no longer any “moderate” Republicans. And so it seems that libertarianism will remain on the fringe, but the GOP has become much worse than a libertarian party, and it seems to be getting more and more dangerous by the hour.