Eric Cantor got booted out of office by the Tea Party, and now he's stumping for Jeb, which is great news for Trump 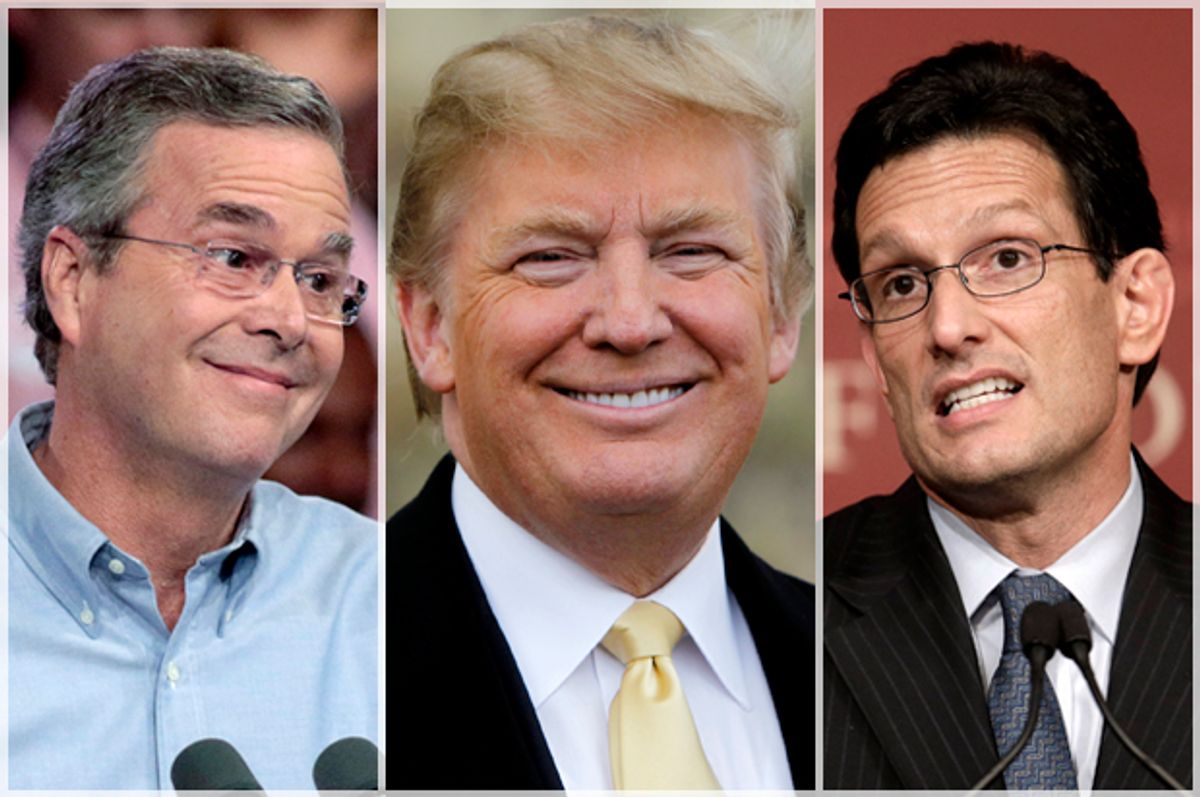 It’s tempting to feel a little sorry for Eric Cantor. He was elevated to House majority leader at a time when Tea Party extremism made effective governance all but impossible, and he did nearly everything he could to keep the cranks and nutjobs happy. There was no greater force for obstructionism in Congress than Cantor. He conceived and successfully implemented the GOP’s strategy of blanket, unrelenting opposition to every single major policy item backed by President Obama, starting from literally the first day of the Obama administration. He was the driving force behind the many fiscal showdowns of 2012 and 2013 and even worked to undermine Speaker John Boehner’s attempts to cut deals with the White House on taxes and spending.

And as a reward for his tireless efforts, the Tea Party and talk radio successfully conspired to boot him from office, arguing that he was too close to Wall Street, too mired in the Republican establishment, and (hilariously) too soft on immigration and Obamacare. He lost his primary to a hardline anti-immigrant Ayn Rand devotee and resigned his seat in Congress. Shortly after stepping down, he secured a highly lucrative sinecure in the financial industry. So while it may be tempting to feel bad for Cantor, don’t.

He’s been largely absent from national politics since then, but now comes news that Cantor is endorsing Jeb Bush for president in 2016 and will be the co-chair of Jeb’s campaign in Virginia. At first glance there wouldn’t seem to be much upside in securing the backing of a former politician who is a history-making loser, but Cantor does bring a few things to Jeb’s camp. He’s really good at raising money, and his tale of electoral woe has to resonate with other GOP establishment types who resent the Tea Party’s ability to dictate the Republican agenda. Having Cantor in his corner also sends a signal that Jeb is the establishment alpha male as he fends off challenges from candidates like Marco Rubio and John Kasich.

On the other hand, it’s tough to think of something that fits more perfectly into Donald Trump’s anti-establishment campaign against Jeb than an endorsement from Eric Cantor. Cantor’s primary defeat stands out as a powerful example of Tea Party clout and talk radio influence. And the reasons most often cited for Cantor’s downfall – coziness with the establishment, Wall Street cronyism, weakness on immigration – are all right in the Trump wheelhouse.

Just this week, Trump lashed out at Jeb for having the same sort of cushy financial gig (at Lehman brothers) that Cantor lined up post-defeat. Trump has been relentlessly pounding away on immigration, proposing draconian enforcement policies and criticizing Jeb’s relative moderation on the issue. For a Trump supporter, Cantor’s endorsement of Jeb is a validation of pretty much everything Trump has said about Bush, and a reminder that the establishment does not always win when pitted against conservative activists and right-wing media. Breitbart News – which is fully in the bag for Trump and may or may not be on Trump’s payroll – has already seized on Cantor’s endorsement as the “kiss of death” for Jeb. Radio host Laura Ingraham, who played a critical role in promoting Cantor’s challenger during last summer’s primary, says that “Cantor’s support will undoubtedly further alienate the grassroots as Jeb continues to slip in the polls.”

Jeb wasn’t really going to win over those “grassroots” conservatives anyway, at least not at this stage in the primary when voters have a wide variety of candidates to choose from. At the same time, accepting Cantor’s endorsement is a fairly provocative move on Jeb’s part. Cantor was expelled from Republican politics by restive conservatives who came to loathe pretty much everything he stood for. It was a critical moment in right-wing politics that activists hoped would shock the GOP leadership and bring them around to the Tea Party vision for Republican governance. By bringing Cantor into the fold, Jeb is telling those conservatives that he didn’t get the message and probably never will.