Salad isn't overrated. On the contrary, it's under-appreciated 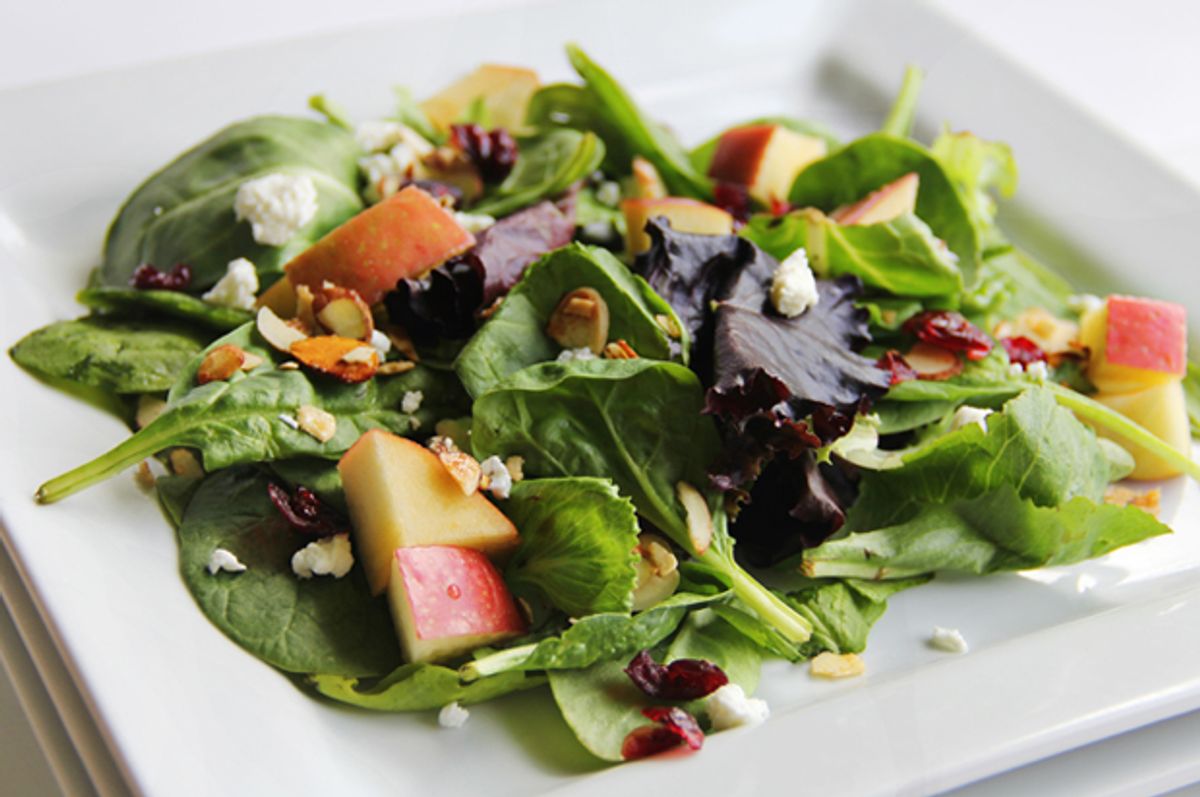 Ladies and gentlemen, we've been trolled. Or at least I was, temporarily, when I came across this incendiary headline in the Washington Post: "Why salad is so overrated." In one masterfully headlined column, food and science writer Tamar Haspel attempts to convince us that everything we've ever been told about mixing cut-up foodstuff into a bowl of greens is a lie. And she very nearly succeeds, until you realize that the entire argument was written by a person who has no idea what salad is -- or at least, what salad can be.

The problem comes down to this: Haspel is working from an incredibly limited definition of "salad," one which suffers, paradoxically, from both a failure of the imagination on the one end and an overactive imagination on the other. "Salad," in this bizarro-world, refers either to a limp, watery concoction made up of only the blandest and, yes, nutrient-poor ingredients -- iceberg lettuce, topped with cucumbers, radishes and celery (is that actually a common salad mix-in?) -- or else what passes for a salad at the Cheesecake Factory, the chain famous for its 2,410 calorie single serving pasta dish. Picture the contents of an extra-dense burrito dumped onto a bed of greens, bathed in dressing, topped with extra cheese and then marketed to would-be virtuous diners by way of the insidious "health halo."

Haspel's right: that's bullshit. But as she herself acknowledges, it's no reason to stop ordering salads. It just means you should err toward the menu items that skip the fried chicken and feature plenty of "actual vegetables," ask for the dressing on the side, and maybe reconsider your decision to try and dine healthfully at Applebee's, because come on.

She's also right that a salad can be bland and flavorless and wasteful, if mixed from ingredients that happen to be all three. Nutritionally, iceberg lettuce doesn't have much going for it -- although that doesn't stop it from being a good, benign substitute for bread. And lettuce is a resource-intensive crop, a fact that doesn't sit well with efforts to reduce our contributions to drought -- lettuce contains mostly water, and 90 percent of America's supply is grown in California -- and to climate change. Aside from requiring plenty of fossil fuels to grow and transport across the country, lettuce has emerged as a particular scourge in its bagged form, which involves even more water and energy usage on the part of processors, who also end up throwing out a lot of perfectly good greens. It's those pre-cut, plastic-wrapped greens are also the ones most responsible for foodborne illnesses.

But I find it hard to believe that anyone eating such a meal needs to be disillusioned. They already hate their salad. And again, none of this is inevitable. For the price of a head of lettuce and some cucumbers and radishes, Haspel points out, she could buy more than two pounds of broccoli or sweet potatoes. You know what goes great in a salad? Broccoli and sweet potatoes! You know what's better than a salad made with iceberg lettuce? A salad made with literally any other type of lettuce!

I ran this admittedly bold conceit by Jo Robinson, an investigative journalist whose book, "Eating on the Wild Side," explores ways to boost the nutrients we derive from fruits and vegetables. "It is true that more than 50 percent of the greens we consume are iceberg lettuce," Robinson told Salon, "It's just all-pervasive, and many people have never tasted anything but that." Getting more vitamins, minerals and antioxidants, she said, is as easy as mixing in spinach, red cabbage or kale. If you really want to go for it, and make a more interesting salad to boot, she suggesting adding arugula ("the perfect salad green," per Robinson), watercress or fresh sorrel, both of which can be found at farmer's markets, or even dandelion greens, which can be plucked right from your (unsprayed) lawn, and whose nutrient profile outshines even that of spinach.

As chain restaurants prove, there are next to zero constraints on what a salad can be. Of the many great things about salad, this is by far the greatest. And it's why suggesting that the best way to save the planet is to just skip the salad is so patently ridiculous. Haspel cites the salad chain Sweetgreen as offering more healthful options; the company also happens to be known for its commitment to sourcing local, seasonal ingredients. (Full disclosure: I file stories from its Brooklyn location on a regular basis.) Sweetgreen's latest innovation, borne out of a collaboration with chef Dan Barber, is made up entirely of food scraps that would otherwise go to waste -- romaine hearts, broccoli leaves, roasted bread butts -- and I can confirm that it is delicious.

The wastED salad didn't actually have anything to do with salad, per se, Barber pointed out to Salon. It was more part of his ongoing project to repurpose waste in our food system, and it'd be difficult to replicate his method at home. The sustainable salad, for Barber, is one that's designed with seasonality in mind: we should enjoy spring greens in the spring, and lettuce, which is difficult to grow in the summertime, in the dead of winter -- also a good time for less conventional greens, like kale. ("Are they salad greens? I don't know," he mused. "But it's a salad.")

"A lot of what we can deem 'sustainable' depends on how we use it in our kitchen," said Barber, who was careful to note that he hadn't read the article in question. But, as a general rule, he said, "a salad is very sustainable if you're making the right kind of salad with the right greens at the right time of year. That's true of anything."

Just to push this thought a bit further, let's go back to that broccoli, which Haspel argues would make a better side dish to her main course of chicken than would salad. My question to her is, why do the vegetables, regardless of what form they're presented in, have to be the side dish? If we're going to start choosing food based on its health value and environmental impact, there's a strong argument to be made that meat needs to be demoted from its starring role at the center of our plates. This applies mostly to beef, which has an enormous carbon footprint and is incredibly water-intensive, as well. Chicken goes easier on the planet, but the way in which most poultry is raised in this country threatens both our health and our consciences. For a healthful, sustainable diet, the Dietary Guidelines Advisory Committee recommends eating less meat and more "vegetables, fruits, whole grains, legumes, nuts and seeds" -- also known as the makings of a fantastic salad.

Not sure if what you've thrown together is going to taste good? Try it. The worst that happens is that you don't really like your salad. Someone wants to to tell you that what you've created isn't actually a "salad," in order to make a very limited point? Toss 'em.