The solace of street knowledge: Violence, black vulnerability and reading the lessons of Ta-Nehisi Coates in "Straight Outta Compton"

The drama of N.W.A.'s biopic rises from the same "sheer terror of disembodiment" in "Between the World and Me" 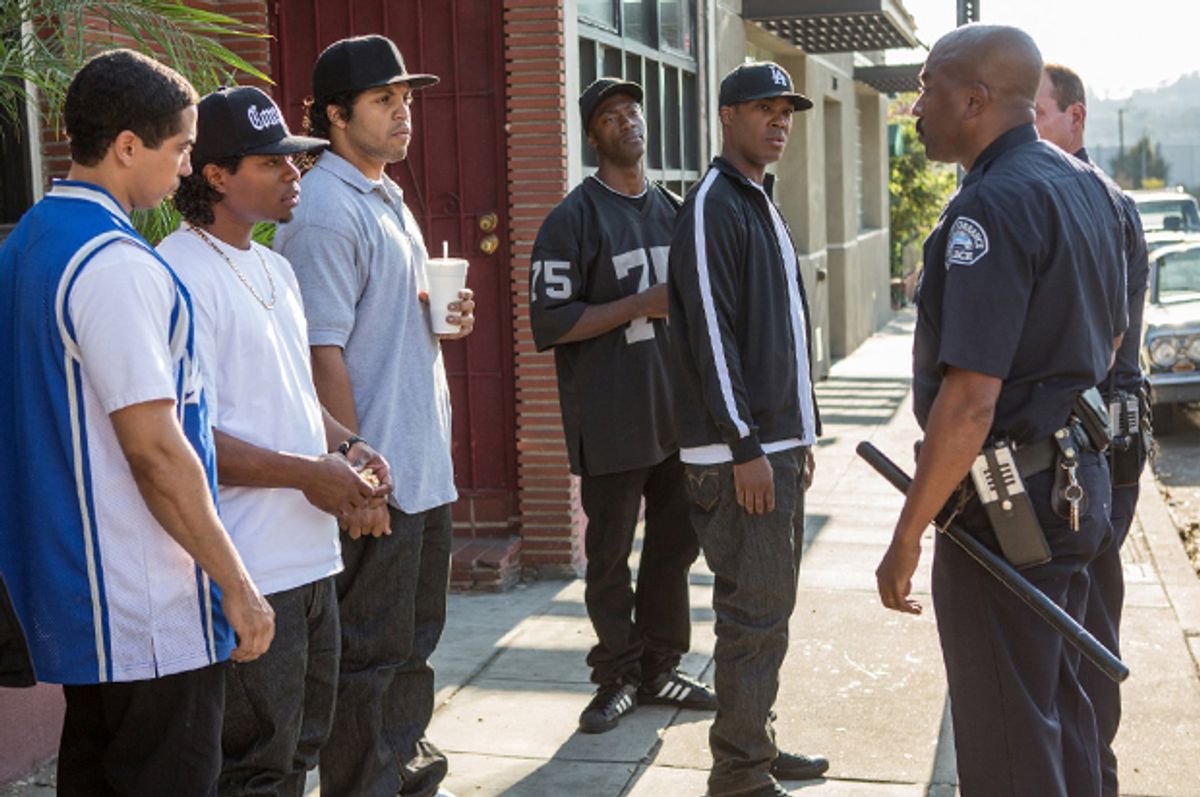 In its explosive first minutes, "Straight Outta Compton" drops the viewer abruptly, without condescension or pretense, into a world where violence is omnipresent. The film introduces us to Eric, aka, we're told, Eazy-E, soon to be member of the iconic hip hop group N.W.A. After delivering drugs to a dope house, blue bandanas donning its walls, he hurls invective toward an unnamed female who offers him a forty. “Why you gotta be so ruthless?” his business associates ask, drawing their weapons. Before their conflict is resolved, an armored tank branded with the logo of the Los Angeles Police Department plows through a wall of the home and directly into the body of a young woman. E escapes through a window, narrowly avoiding the sharp fangs of a mad dog before hopping from rooftop to rooftop as the film's title appears on the screen.

In the next scene we meet Andre, known to most viewers as Dr. Dre, whose mother slaps him across the face before giving him a fraught lecture on responsibility and ejecting him from her home. The next, a young Ice Cube is returning home from his largely white school district, when a group of Bloods storm onto the bus. “Y'all n*ggas ready to die today?” one asks the students, who moments ago were playfully throwing gang signs out the window and now stare down the barrels of guns. “Y'all m********** need to gang bang them books,” he warns. Cube arrives at his friend Dre's home and recounts the tale of an OG boarding his school bus to give a “motivational speech,” only to, minutes later, find himself slammed into the hood of a policeman's car, being frisked aggressively for no discernible reason. “This LAPD,” the officer tells him, “I'm the only gangster out here.”

The flammability of these moments, the ever-present specter of state-sanctioned violence and the violence this threat begets, is a running theme of Ta-Nehisi Coates's much-lauded "Between the World and Me." The “sheer terror of disembodiment,” Coates writes, was “always right in front of [him],” in “the extravagant boys of [his] neighborhood,” “in their customs of war,” their “bylaws and codes that, in their very need, attested to all the vulnerability of the black teenage bodies.” “My father...beat me as if someone might steal me away,” he writes, “because that is exactly what was happening all around us. Everyone had lost a child ... to the streets, to jail, to drugs, to guns ... And now they were gone, and their legacy was a great fear.”

Coates takes special pains to note that this violence is the natural result of systematic oppression, warfare whose aim was to serve the best interests of white communities at the considerable expense of black ones. One might think such claims are hyperbolic until seeing images of Nancy Reagan casually riding shotgun during “Operation Hammer,” as the LAPD trotted military vehicles down city streets, destroying homes so as not to give dealers time to destroy evidence.

Which explains why the film's characters seek solace in their bylaws and codes, what N.W.A. calls “street knowledge.” Dre punches a young man outside a club one night, but when the police arrive and ask his bloodied victim what happened, he dutifully replies, “I fell.” (Dre is arrested anyway.) In one of the film's most powerful images, members of rival gangs, holding up a red and a blue bandanna knotted together, march purposefully toward police officers cloaked in riot gear in the wake of the Rodney King trial. Their desire to handle conflicts internally is logical when the alternative is to subject themselves to the seemingly arbitrary justice doled out by the state. For violence designed to suppress rather than protect is, by design, unpredictable. It must be swift and unflinching. It must be cruel.

The members of N.W.A. use their music as respite from the ubiquitous dangers of their Compton lives. The film's scenes in the recording studio and on stage are so enjoyable because it is here that its protagonists also seem to derive real joy from the creative process, to feel self-assured in their talent and, above all, secure, in fact, empowered, in their own bodies. The group's very name, “Niggaz wit Attitude,” Ice Cube has said, was “black people taking that word and trying to use it instead of getting abused by it.” He later forms another group called “Da Lench Mob.” Eazy-E names his record label “Ruthless.” These are conscious choices intended to strike back at authority within the confines of a fundamentally oppressive system. Ice Cube, promoting the film, was asked by the New York Times whether people don't acknowledge his music as nonviolent protest because “the nonviolent part wasn't very clear.” His response evoked scenes from "SOC" wherein group members deftly shut down clueless reporters. “I think it's very clear,” he replies, “We didn't make a Molotov cocktail ... All we did was make music.”

That music, though vulgar, is not crass, and often displays a sophisticated understanding of the racial biases at play in the targets of their protest. In one of the film's scenes, three cops harass the group members outside of the recording studio where they're hard at work. When they are dismissed, the lone black cop insults Cube with racially charged language. Wearing a look of defiance, he obeys orders, walking wordlessly into the studio, where moments later he jots down the lyrics to the famous manifesto “F*** the Police.” “Don't let it be a black and a white one / 'cause they'll slam you down to the street top/ black police showing out for the white cop,” says Ice Cube's verse. N.W.A.'s music also recognizes the racial nature of economic mistreatment, a later track referring to the group's exploitative manager in the same breath as the “white superpower.”

Indeed, one of the most striking features of "SOC" is the way in which the characters' precarious situations, the volatility of lives experienced ever on the brink of lethal violence, fuels much of its dramatic tension. Remarkably, that tension does not dissipate when its protagonists skyrocket to fame, which rests far above safety and security on the hierarchy of needs. They are similarly vulnerable to economic exploitation. Though smart and savvy, they initially lack the very specific training needed to navigate complex business dealings. And so they resort to violence. When one executive attempts to swindle Cube out of money he was promised, acknowledging the legitimacy of his grievances but pretending his hands are tied, Cube returns with a baseball bat and destroys his office. Just as the audience thinks he might take a bat to the exec's skull, he instead holds back. “Take it out what you owe me,” he says.

The line is important, making clear that he perceives violence as a legitimate means of extracting justice and imposing fairness on a system stacked against him. Cube's relative restraint is contrasted with the violence employed by Dre's business partner in the film's second half, the aggressive and domineering Suge Knight. When Dre wants to get out of his contract with Ruthless, Suge summons E, who is watching the King trials at home, to the recording studio. When he arrives, Suge and his entourage beat him viciously until he signs the papers releasing Dre from his obligation, the cinematography of the assault mirroring that of King's. Unlike Cube, Suge is depicted as an unhinged figure, at one point charging at someone who dared park in his spot while Dre pleads with him to relax. The violence that surrounds Dre is depicted as a liability, his girlfriend hesitating to move in with him, citing concerns about the safety of her son and, amongst other things, “the assault charges.”

One assumes the assault she is referring to is that of Dee Barnes, a journalist who has publicly spoken about the night she was brutally beaten by Dr. Dre, and the decision of the filmmakers to downplay his violence against women. Charges of misogyny are amplified by the decision of the film's director, F. Gary Gray, who explores the vulnerability of the black body with the same sophistication as Coates, to crudely use the unique vulnerability of the female body for cheap laughs. When questioned about a scene in which Cube shoves a near-naked woman into the hallway of a hotel, Gray was grossly unsympathetic, claiming it was one of "SOC"'s most entertaining moments. (It was, in an often hilarious film, one of its least.) “If you’re looking to be politically correct in entertainment, especially as it relates to comedy, that’s the end of entertainment ... That’s just an awful question,” he said. “We should be focusing on how the police are treating innocent American citizens. What about that? Let’s talk about something as important, if not more important, if you really want to go there.”

Of course, critics of the #BlackLivesMatter movement have often dismissed it on similar grounds, claiming that political correctness prevents us from having honest conversations about the real problem: black-on-black crime. (The juxtaposition highlights the importance of engaging with substantive critiques rather than dismissing them offhand as a talking point of the P.C. police.) Lost on these critics is that the campaign is not just against the literal brutality inflicted upon minorities, but also the psychological toll enacted by a lack of accountability. A pivotal moment in Coates's book occurs when his son learns Michael Brown's killers will go free. The acquittal of King's assailants is a similarly disheartening moment in the film.

Violence is empowering when it is oppressive, but a side effect of powerlessness when it is exercised by the oppressed, a last grasp at authority and influence for those who'd rather have institutional recourse. For the oppressed, violence is instead an expression of vulnerability. One of the most triumphant moments of "SOC" occurs when Dre parts ways with Suge, happily forfeiting clients and money. “You can't put a price on peace of mind,” he shrugs, as he declares his intent to form his own label. The film's postscript shows just how successful he was, describing the artistic legacy of N.W.A. but ending on its financial one, noting triumphantly that Apple's acquisition of Beats by Dre was the largest in the company's history.

Dr. Dre and Ice Cube are business and cultural icons, N.W.A. an institution unto itself, but their bodies are still not immune. In the same Times interview with Ice Cube, he is asked whether he gives his children “the talk,” and encourages them to comply with authority. “Of course,” he replies, “and not only about law enforcement. I’ve had that talk about their teachers, the coach, the doctor, the lawyer and anybody else they come across ... The thing is: Don’t get shot. Don’t give ’em a reason to put their hands on you. Nothing wrong with complying; just make sure you come home.”

“Do not pin your struggle on their conversion,” Coates warns his son in the closing pages of "BTWAM," speaking of “the people who call themselves white.” The message is a hopeful one to those who are hardened by history, for whom the music of NWA remains as cathartic and relevant today as it was in 1988. The true tragedy of "Straight Outta Compton" is that, decades after its story begins, its viewing is still deeply vital.