With Amy Schumer and Jennifer Lawrence pairing up, have celebrity BFFs finally jumped the shark? 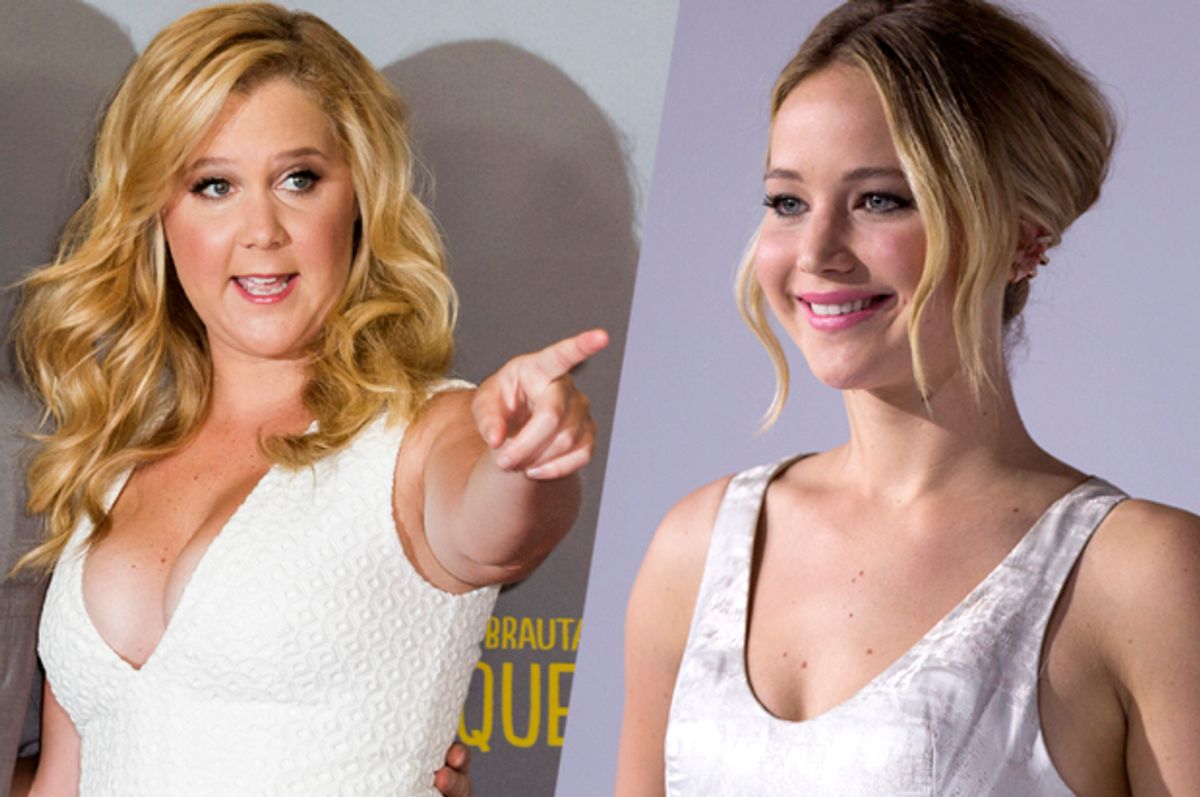 There are few things fans love more than celebrity friendships. Knowing that beloved cultural icons have authentic relationships that transcend the screen or recording studio — that they truly adore each other as we adore them — activates our most primal fangirl and fanboy urges, as the robust state of the Amy Poehler-Tina Fey Friendship Industrial Complex proves.

But in recent months, at least for me, the glimmer of seeing celebs karaoke-ing together and boating together and mugging together on Instagram has started to dull. I blame this largely on Taylor Swift, an all-consuming pop cultural vortex who, no longer content merely to consume the stars of her own generation, has now reached back into the ‘90s to engulf the idols of generations past. (Et tu, Alanis!?) But as annoying as Swift’s rapidly expanding #girlposse may be, it’s the overnight friendship of Jennifer Lawrence and Amy Schumer that has convinced me that celebrity BFF-dom as public spectacle has finally jumped the shark.

On July 30th, Schumer Instagrammed a photo of her and Jennifer Lawrence jetskiing together. The internet, true to fashion, broke (pretty flimsy, this internet thing, huh?). A short while later, Schumer described the interaction on "The Daily Show," thereby codifying their nascent platonic love affair. According to Schumer, the cosmic watersports event took place after the pair happened to run into each other in the Hamptons. "I was like, 'Oh, we’re going on a boat tomorrow. You should come.' It was kind of a hypothetical,” Schumer told Stewart. "And she was like, ‘I think I’m coming.' And I was like, 'Oh my God!'"

Before fans had even had time to process the ramifications of these two great stars aligning, Lawrence dropped another bomb on us: She and Schumer are writing a comedic screenplay together where they — much like the great BFF duo of Fey and Poehler before them — play sisters. (For the record, I'm also not so stoked about that project either, but isn't it odd how female celebrities keep casting themselves as siblings, feeling the need to commodify their offscreen "sisterhood" by creating a fictional sisterhood onscreen?)

“Amy and I were creatively made for each other,” Lawrence told the New York Times. “We have different flavors. It’s been the most fun experience of my life. We start the day off on the phone, laughing. And then we send each other pages. And we crack up. I’m flying out tomorrow to see her in Chicago. We’ll write a little bit with her sister, Kim, who worked with Amy when she was writing 'Trainwreck.'"

Lawrence also gave a little bit of insight into their origin story from a few months ago, saying: “I emailed her after I saw ‘Trainwreck’ and said, ‘I don’t know where to get started. I guess I should just say it: I’m in love with you,’” she explained. “We started emailing, and then emailing turned to texting.”

Then last night, celebrating the impressive milestone of their four-week anniversary as BFFs, the pair clambered aboard Billy Joel's piano and danced like no-one was watching (and then posted it to Instagram so everybody could watch it).

There are a few things that make this friendship particularly irksome. For one thing, the media’s response to has been the blogging equivalent of leaping up and screaming incoherently. "New squad goals!" proclaims ET, while Huffington Post declares that "All Is Right in the World." (BuzzFeed, meanwhile, helpfully suggests that we "GRAB SOME SEDATIVES!") But what is even worse than the headlines themselves is the predictability of our response: How easy it is to manipulate public sentiment by a few well-placed Instagrams or surreptitiously-snapped jetskiing pics.

Because while this friendship has every appearance of being engineered in some lab to drive SEO and cause GIFs to magically self-generate, we're still gullible enough to buy it as authentic, or at the very least to play along, because it’s much easier to buy what stars are selling than to write a narrative of our own. Isn’t it convenient that the announcement of their sister-screenplay came on the heels of our collective public freakout about their nautical adventures? Or that the pair made a viral spectacle of themselves dancing to Billy Joel, just like Schumer does at the end of "Trainwreck," now playing at your local AMC?

Look, I’m sure Schumer and Lawrence really do like each other, because how could they not? Are kittens not soft? Is ice cream not delicious? But it’s the performative aspect of this relationship that makes it feel so cheap and inauthentic: The fact that they are packaging and selling this BFF-dom as a cultural commodity, one sure to pay dividends in the long run. When it comes to traditional media, we tend to be pretty savvy — we know that it's a strategic move when Brangelina sell their wedding pics to People Mag, and that celebrities like the Kardashians have close relationships with the tabloids of their choice that they use to control the narrative around them. We've even become wise to Swift's tricks, sort of. But for some reason, when something happens on social media, it elicits a kneejerk reaction from us — this photo is grainy and has a Valencia filter, so it must be real! — that causes us to let down our guards. Bolstering a celebrity friendship on Twitter and Instagram lends it a sheen of authenticity that also feels slightly disingenuous. Heck, or maybe it’s just smart, and we are the dumb ones for buying into it. After all, this is part of the new model of female mass celebrity, and leveraging the #girlsquad is one way to appeal emotionally to fans. (And, apart from perhaps Patrick Stewart and Ian McKellan, it is a largely female-targeted demographic phenomenon: Nobody really cares who Trevor Noah's best friend is, do they? At least, not yet.)

Amy and J.Law know. They know that everything they do will be breathlessly aggregated. They know that the star power of two beloved, goofy, trip-prone, liberally photo-bombing blondes is better than one. And they know that they can sell scripts if we believe their onscreen sisterdom is founded on a real-life one. Because Amy and J. Law are savvy, talented, awesome women whose popularity is well-deserved. The fact that they are "friends," on top of all of it is a detail I can take or leave. The fact that they are also potentially evil geniuses? Now that's something I feel okay about celebrating.