The secret history of "Y'all": The murky origins of a legendary Southern slang word 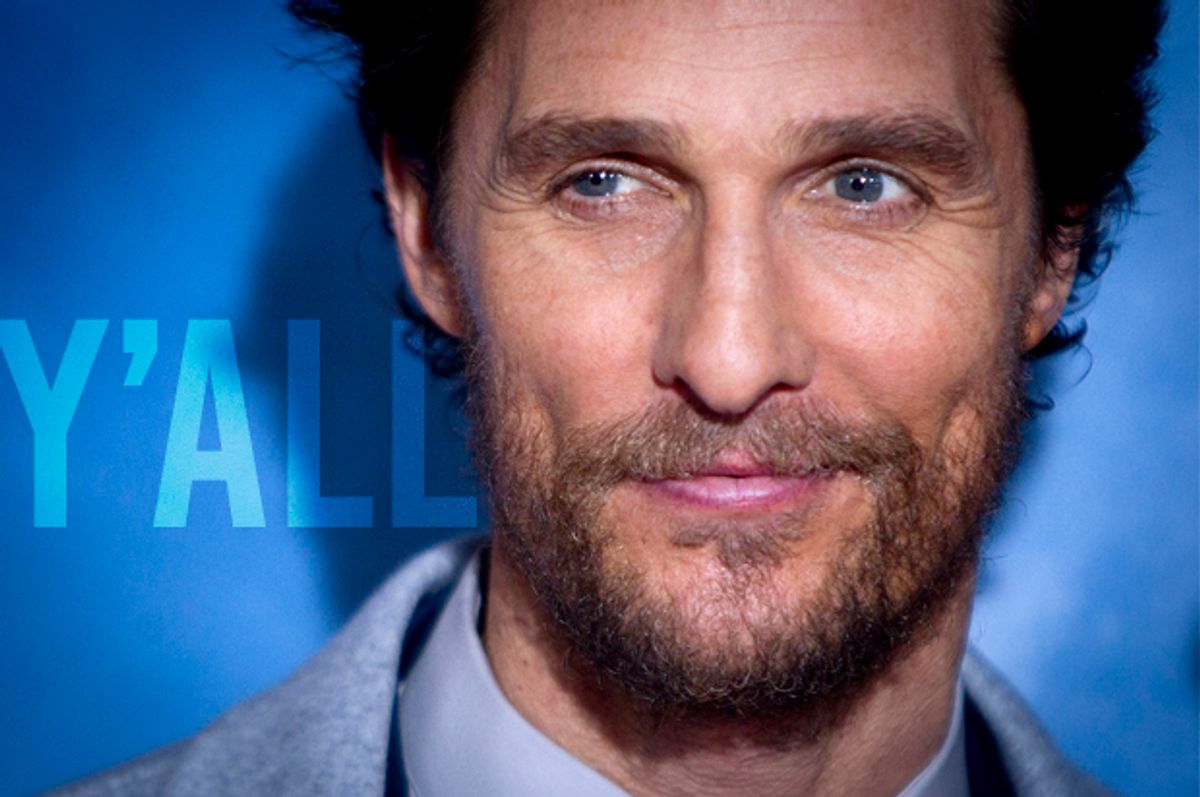 As I jumped across the pond for a few weeks, back in my grad school days, I wanted to at least try to assimilate. Step one was toning down my Americanisms and in particular my Southern accent. I had phased out “ain’t” while teased during my college years in the North, and I could easily swap out my “ATM” for “cash point” and “to go” for “take away.” But one thing couldn’t be distilled out of my vocabulary: “y’all.”

So ingrained was the word in my lexicon that I didn’t even notice when I said it. It flew under my linguistic radar, and it blew my cover completely. Not only was I American, I was a Southern American. Busted.

Fast forward ten years, and nothing has changed. While I teach my History of the English Language students to be hyper-attuned to dialect and code-switching, “y’all” continues to escape my notice — in class and at conferences, on the phone and at the grocery. (Unfortunately, it doesn’t escape autocorrect’s notice, as my phone still annoyingly changes “y’all” to “tall”).

It’s true that “y’all” is “the most identifiable feature of the dialect known as Southern American English.” But where did it come from? And how did it end up in the South?

Many discussions of the word connect it to the history of second-person pronouns in English. Old English had singular and plural forms of “you,” and these eventually morphed into the formal “you” and informal “thou” pronouns you find in Shakespeare and the King James Bible. But “y’all” isn’t a descendant of these, and there’s still debate about its origins.

Common sense might suggest that people simply started to contract “you all,” as we often do with other phrases, such as “they are” to “they’re” or “does not” to “doesn’t.” But scholars think it’s actually not so simple.

The Oxford English Dictionary (OED) is usually academics’ first go-to for all things linguistic, and it cites the first occurrence of “you all” in print in 1824, from Arthur Singleton’s Letters from the South and West:

“Children learn from the slaves some odd phrases;..as..will you all do this?”

This example is important for understanding not only the term’s origins but also the difficulties surrounding it.

First, does this count as “y’all”? It doesn’t contain the contracted “y’all” but rather the spelled out “you all,” a phrase that occurs all the way back in Middle English texts; however, given that Singleton is recording the instance as an “odd phrase,” has he attempted to correct it by spelling out the contraction? Or has he recorded the phrase as it was spoken, so that this wouldn't really be considered an instance of “y’all” at all?

The OED’s first recording of the actual contraction “y’all” is in A. W. Arrington’s "Rangers & Regulators Tanaha," from 1856:

“Why, heern as how the regerlators wur guine to cotch y' all and swing y' up to dry, us thought we'd better heave to.”

The fact that this quotation is in dialect suggests that, because the contraction was not seen as proper English, there was likely a tendency for those recording it, perhaps as in Singleton’s example above, to “correct” it. So, speakers might have been saying “y’all” long before this, but recorders were only writing down “you all.”

An example of the word from in the New York Times captures some of these difficulties well. In an 1886 article titled “Odd Southernisms: A Few Examples of Quaint Sayings in South Carolina,” the writer first lists “you all” as a Southernism, then clarifies by writing “or, as it should be abbreviated, ‘y’all.’” (He continues that it is “one of the most ridiculous of all the Southernisms I can call to mind”). Such “correction” of the term in written accounts makes it difficult to find its first occurrence.

But if determining when the word was first used is difficult, determining its origins is even trickier.

In academic circles, many subscribe to Michael B. Montgomery’s suggestion that “y’all” descends from the Scots-Irish “ye aw” and not directly from “you all.” He cites a 1737 letter by a Scots-Irish immigrant in New York as an example: “Now I beg of ye aw to come our [over] here.”

Montgomery’s argument relies on two observations about “y’all’s” unique place among English contractions. First, contractions in English place stress the first word and contract the second, such as in the case of “they’re,” where “they” is stressed while “are” has been shortened. But “y’all” does not conform to this pattern. Instead, it stresses the second word, “all,” and contracts the first, “you.” Secondly, there are no other contractions that involve “all” in English, whereas we have lots of contractions involving “will,” “not,” and “are.” These irregularities suggest a more complex origin, such as a cognate word, like “ye aw.”

Others, though, follow John M. Lipski’s argument that it entered Southern English through early African-American vernaculars or an African-English creole (similar to Gullah) in the first part of the 19th century. Singleton’s quotation above, noting that “children learn from the slaves some odd phrases,” and the word’s pervasive presence in modern African-American dialects support Lipski’s line of thinking. An origin in a predominantly oral tradition, as most African-American varieties were in that period, might also explain why there are so few records of its early usage.

But these two theories aren’t mutually exclusive, as both scholars admit. Montgomery suggests that “ye aw” made its way to American shores with the tens of thousands of Scots-Irish who emigrated from Ulster to Appalachia over the 18th century; during that same time, more than a hundred thousand African slaves survived the Middle Passage and arrived in the South. Notably, Irish immigration and the Southern slave population both grew significantly in the early 19th century and peaked in the 1840s and 1850s, the very period the OED’s two quotations above come from.

So it is possible that “y’all” emerged from both of these origins, with the similarities in sound and function making the word a popular choice for both populations to use. There would have been much interaction between the two in the American South, and both Montgomery and Lipski point to Appalachia specifically as an area of close contact. Unlike the highly stratified culture of Southern plantation life, the more rural environment of Appalachia cultivated crossover between black and white communities. This hypothesis rests on how closely linked Southern and African-American vernacular dialects were in the early South, a question that scholars are still exploring.

Admittedly, “y’all” is less of a cultural liability now than it has been in the past, despite autocorrect’s tyranny against it. In general, we seem to be more interested (and thus, perhaps, more forgiving?) regarding regional dialects, particularly Southern English.

As The Atlantic noted, the New York Times’ most viewed article in 2013 was not an article at all but rather an app that tracks dialects. Its title, “How Y’all, Youse and You Guys Talk,” advertises the second-person plural as, again, the defining dialect feature. (Arguably, “y’all” is the most commonsensical of modern options, more logical than “youse” or “you guys”). As interest in “y’all” continues to grow, let us remember to look back to its complex and still puzzling roots.