Mitt Romney's "self-deportation" proposal once looked like the apotheosis of stupid. How things have changed 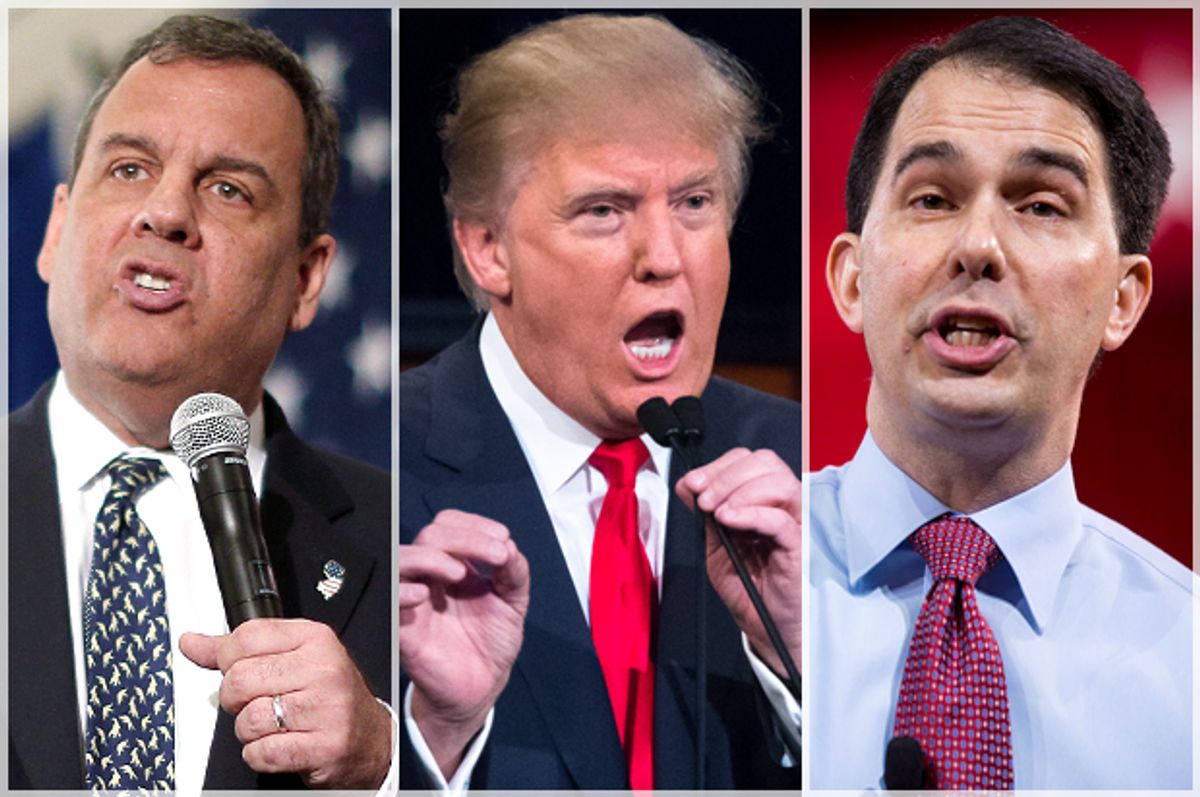 Let us give hearty thanks to Donald Trump. Due to the Republican frontrunner’s vows to build “a very beautiful wall” on our southern border, his opponents now keep one-upping each other’s crazy ideas for dealing with illegal immigration, in what has become the most entertaining spectacle of this election cycle.

Take Chris Christie. On Saturday, the governor of New Jersey suggested, apparently seriously, that if he is elected he will hire Federal Express founder Fred Smith to show the Immigration and Customs Enforcement agency a way to track illegal immigrants the way Smith’s company tracks packages. So no Republican primary voters will question whether this new system makes Christie a big-spending liberal, the governor assured his audience Smith will need only three months to get ICE tagging immigrants the way his company tags that framed photo of your kids you shipped your grandmother for Christmas.

Christie was actually repurposing a Newt Gingrich joke from 2012, though whether the governor was aware it was a joke is open for debate. (That Christie’s communications director Samantha Smith is Fred’s daughter adds to the cloudiness.) The FedEx solution addresses the problem of the 40 percent of America’s estimated 11 million illegal immigrants who are here because they overstayed their visas. As Christie told his New Hampshire audience: “We need to have a system that tracks you from the moment you come in, and then when your time is up…however long your visa is, then we go get you and tap you on the shoulder and say ‘Excuse me, thanks for coming, time to go.’”

Left unaddressed is how the government would tag these visa-defying scofflaws. Would each of them have a sticker with a bar code slapped on their foreheads when they walk off a plane? Would we tattoo a bar code into their arms? (Say, you know who else tracked people by tattooing a number into their arms…) Would we insert a microchip under their skin, the way pet owners do to keep track of Fluffy and Rover? And who exactly would be sent to tap foreign visitors on their shoulders when their visas are up? Presumably ICE would have to hire a lot more agents to chase the approximately 4.4 million foreigners who have overstayed their welcome. Though unlike when conservatives thought Obama was hiring thousands of new IRS agents, presumably they would feel this hiring spree is for a good cause.

Or take Scott Walker. Citing concerns from unnamed law-enforcement officials, the Wisconsin governor on Sunday suggested that building a wall on Canada’s border is “a legitimate issue for us to look at.” Presumably this would keep out not only the Muslim jihadists trekking across the wilds of Saskatchewan to wreak terror in North Dakota, but also all the Canadians sneaking over the border to take advantage of the services America offers that Canada lacks. Or to stealthily take back Tim Hortons. Hard to know what those Canadians are up to.

Perhaps Walker is unaware that when jihadists try to sneak into America from our northern neighbor, they have in the past gone through – or I should say tried to go through – already-existing checkpoints. And maybe he has already lined up the CEO of Home Depot to show the government an efficient and inexpensive way to build a fence on what is, at 5,525 miles, the world’s longest border. He did not go into detail. (By contrast, the U.S.-Mexico border is 1,954 miles. Take that, Donald Trump.)

It’s easy – and hilarious – to make jokes about Republican candidates responding to nativist fever dreams by proposing expensive and unworkable construction projects while the rest of our country’s underfunded infrastructure crumbles around us. But these kinds of proposals are valuable as one more data point in making the argument to voters about just how far out to the right the Republican Party has sailed. Remember when Mitt Romney’s “self-deportation” comment was the apotheosis of stupid? Four years later, a GOP candidate can seriously propose treating visitors to America the same way a package delivery service treats the boxes and envelopes that fill its warehouses.

Sure, one can argue that with both their campaigns floundering, Christie and Walker have to try and out-crazy the craziest suggestions. But the fact that neither seems to be getting pushback from the rightwing media that is the go-to news source for the GOP’s primary voters suggests that nothing is too absurd, revanchist, or flat-out racist for the Republican base. And if by some miracle either Walker or Christie turns his campaign around and captures the nomination, he’ll be expected to deliver on his promises of a border fence or a human tracking system right out of a dystopian YA novel.

It’s as if the entire GOP field is made up of actors in a Christopher Guest mockumentary about a presidential campaign. If Bob Balaban pops up on Fox News this week to declare his candidacy and propose forcing all Latin American governments to make their citizens wear cowbells so American Border Patrol agents can hear them coming, I won’t be surprised.