With promises of "law & order" and appeals to the working class, Trump echoes Tricky Dick and Pat Buchanan 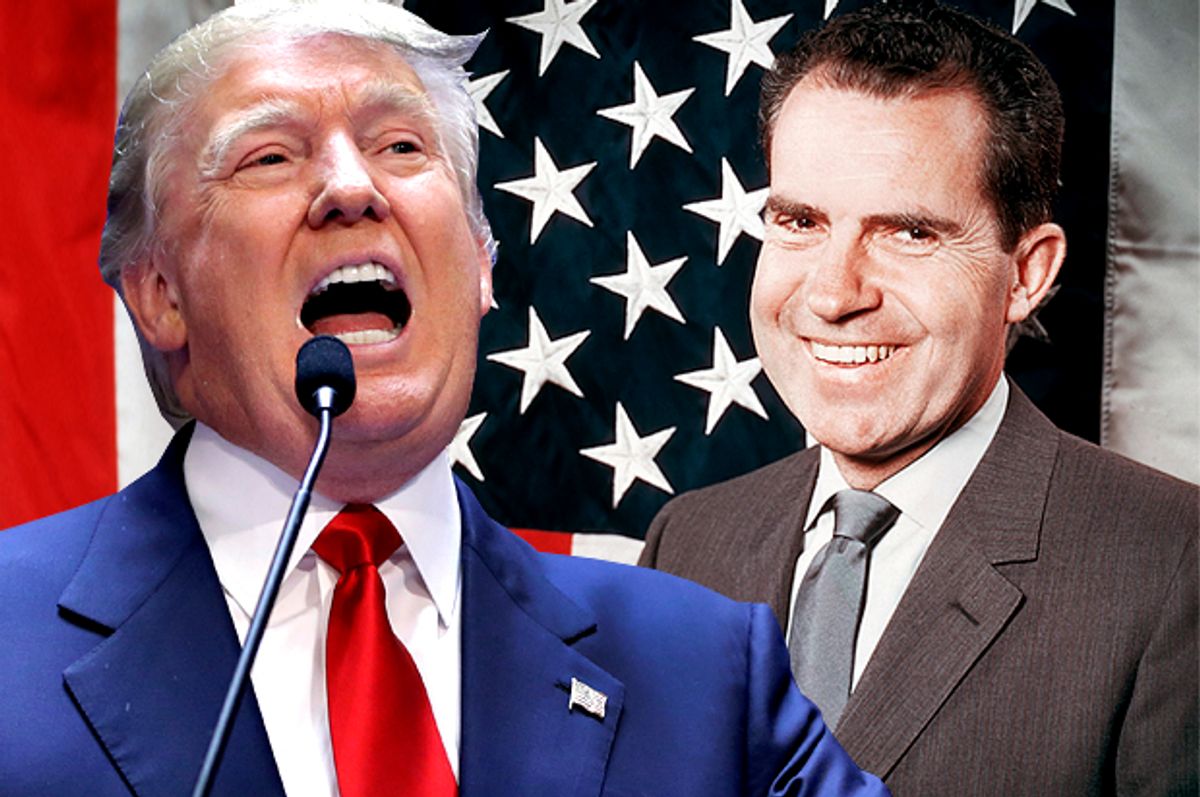 We’ve come to the stage in the Donald Trump farce where progressive analysts must try to see him as more than just an avatar of white grievance, or else we’ll have to be heavily medicated for the rest of primary season, at least.

For my money, the two best recent attempts at this have been Jamelle Bouie in Slate, and Lee Drutman in Vox. Both tune into populist, even progressive strains in Trump’s appeal, though they’re hard to hear with all the shouting about Mexican “rapists” and menstruating bimbos. Trump promises to raise taxes on “hedge fund guys” and to protect, not cut, Social Security and Medicare. He rails against lobbyists and the politicians they buy, bragging he’s so rich he can’t be bought.

Bouie even hears echoes of pollster Stanley Greenberg’s advice to Democrats, to focus on the role of money in politics, and the perception that government is allied with big business to screw the rest of us, as a way to appeal to alienated white working class voters.

But as I wrote in a sympathetic appraisal of Greenberg’s work in June: will that message about government serving only the rich truly resonate if it’s not served with a healthy side order of racism? Certainly Trump’s won’t be the campaign that lets us figure it out. Reading Bouie and Drutman appreciatively last week, I still believed his populist economic messaging was nowhere near as important as nativism and white grievance in explaining Trump’s appeal. His performance at this weekend’s National Association of Republican Assemblies – a Tea Party umbrella group – made that even clearer.

Trump’s performance there was ebulliently Nixonian, complete with his now-standard appeal to the “silent majority” and a new pitch to restore “law and order,” a cornerstone of Nixon’s rise to the presidency. He promised to get rid of “gangs” -- “We’re going to get rid of those gang members so fast your head will spin,” he promised with trademark Trump specificity. “One of the first things I’m going to do is get rid of those gang members.”

Then he blasted the unrest in Baltimore, in the wake of the killing of Freddie Gray.

“That first night in Baltimore, they allowed that city to be destroyed,” he said. “They set it back 35 years in one night because the police weren’t allowed to protect people. We need law and order!” Trump said “99.9 percent” of police are good. “You’re going to have some bad apples,” he said. “It’s disgusting and it’s horrible, but that’s such a tiny percentage. The problem is the good work doesn’t get shown on television.”

Of course he got his loudest cheers when he talked about his clash with Univision anchor Jorge Ramos during a press conference in Iowa.

“This clown, Jose Reyes, or whatever the hell his name is,” he said. “Ramos! Actually, Jose Reyes is a baseball player. Ramos got up the other day screaming and ranting.”

Ramos, Reyes, they’re all alike to Trump’s fans. Why don’t they stick to playing baseball?

Why talk about Baltimore, or even Jorge Ramos, to a Tea Party crowd? Wasn’t the Tea Party supposed to be about lower taxes and government spending?

It should remind us that just the way journalists strain to see positive appeals or valid voter concerns behind Trump’s unsettling political rise, we did the same with the Tea Party – and resisted the extent to which it was mainly a reaction to the election of the first black president and the fear he’d give away their tax dollars to blacks and illegal aliens (oh, and get the government involved in mucking up their Medicare).

Besides, white nativist demagogues have often combined a populist economic appeal with xenophobia and racism. In the National Review, Jim Geraghty correctly links Trump to his obvious forebear, Pat Buchanan, who likewise opposed free trade and cast his anti-immigrant appeal as a way to protect the fortunes of white workers.

Nixon himself signed into law the Occupational Health and Safety Administration and courted union leaders. He wasn’t trying to repeal the New Deal, but rein in some of the Great Society spending that his voters believed had gone to lazy and unruly black people. Matt Yglesias correctly underscores the way Trump’s anti-immigrant, pro-safety net platform resembles that of European far right parties.

So as we strain to tease out some legitimate political grievances in Trump’s appeal, we can’t lose sight of its real power: Letting angry white voters believe they can turn back the clock to a time when they made all the rules.