Franzen's "pretty" women: The women of "Purity" are beautiful and invisible, even to themselves

Franzen's male characters, by contrast — even the dog — are drawn vividly and specifically throughout his new novel 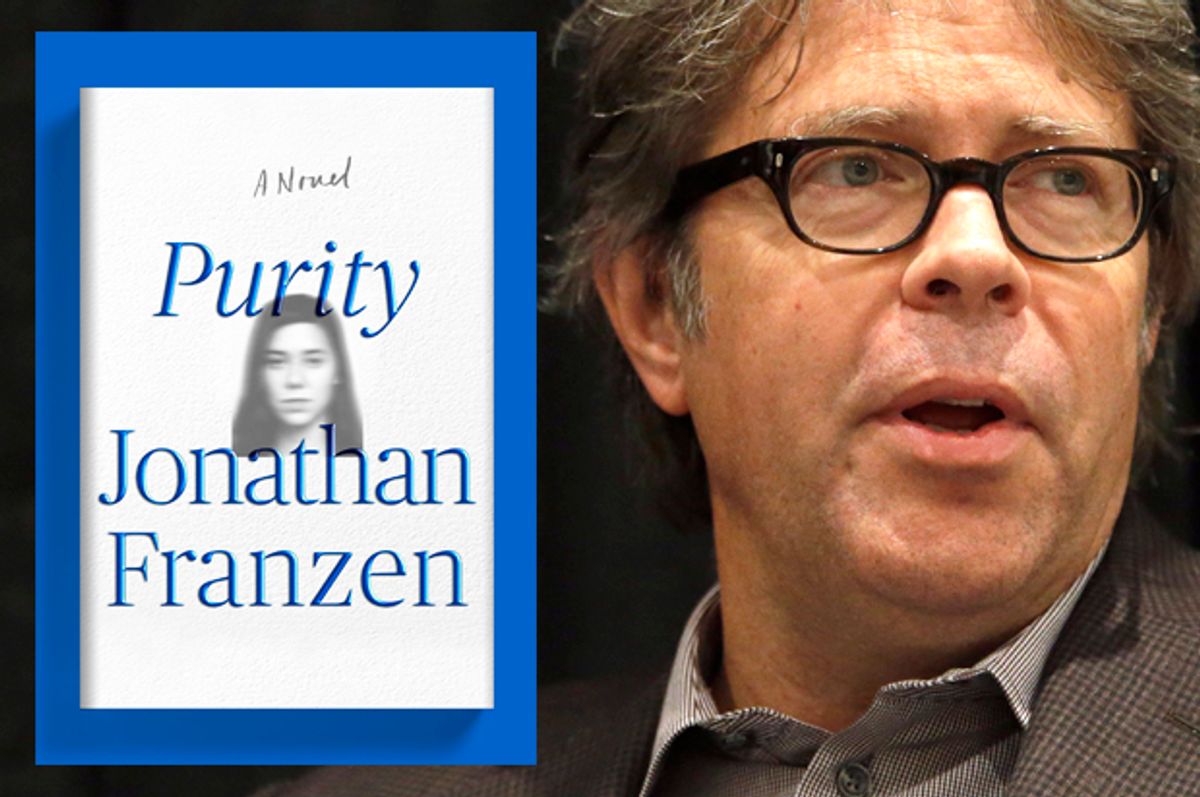 In Jonathan Franzen’s new novel "Purity," bodies twitch, ache, betray and lust. In the very first paragraph, Anabel, the mother of the main character Pip, laments, “Sometimes I think my life is nothing but one long process of bodily betrayal.”

Her sentiment could be echoed by almost every character in the book. Pip, whose real name is Purity, finds herself attracted to older men often with devastating consequences. Andreas Wolf, the charismatic leader of the Sunlight Project, a quasi-Wikileaks, finds himself drawn to the bodies of underage girls. Anabel and her ex-husband, Tom Aberant, are drawn to each other’s bodies even after their relationship has long ended. Another character finds that her body leads men to rape and murder. And yet, in this sea of conflicted and corrupted bodies, the female body is held at a distance.

Pip, the main character, is often described as “pretty” and herself describes other women in terms of their beauty. Pretty faces, pretty fingers, beautiful women and beautiful weeping clog the pages of the book. After page 70, I began counting every time I saw the words “beauty,” “beautiful” and “pretty.” By page 412 I had reached 50 and all of them related to women. The problem with calling a woman beautiful is that it is not a description. Beauty is a judgment. With the exception of Anabel, none of the female characters in the book are allowed to move beyond this judgment. In the over 500 pages, Pip, Annagret and the rotating cast of ancillary women are never allowed more than their shades of beauty.

Franzen distances the female body in other ways as well. Pip calls her vagina her “private thing”, as if she too cannot name her body and describe herself. Such a characterization doesn’t ring true to this young sexually confident character. One would assume that if she’s bold enough to ask for oral sex (she is), she could describe her own vagina or at least call it that without a Trump-like falter. It’s yet another narrative disconnect that fails to render a female character real.

Additionally, narrative perspectives in the sections of the novel that focus on Pip, Annagret and another woman named Leila are heavy with judgment of another kind. Leila is jealous of Pip’s youth and beauty. Pip too is jealous of the women who surround her. The only real female relationship not fraught with jealousy is between Pip and Anabel, mother and daughter. And it is through Pip’s eyes that Anabel is finally seen — thin in a pioneer style dress with wild hair. But that happens only in the end of the book, after Anabel’s body has been brutalized by her ex and meticulously chronicled by herself. But there is no such redeeming description for the other women that lifts them out of the stranglehold of judgment. Drawn with a narrative eye that favors that value judgment over vivid description — as well as the author’s refusal to allow a character to even see and name herself — and tangled in forced jealousies, the women of "Purity" are all but completely obliterated.

Meanwhile, the men of "Purity" stand in sharp relief—Tom Aberant is immediately given the dignity of being seen with his fiercely dated style. Wolf, too, is seen, with his tight leather jacket and jeans and mop of blond hair. Even Choco the dog, with his bumbling body and mouth full of lemons, is allowed to be real — more real than the novel’s protagonist. In just a few sentences of description, Franzen does for a dog what he cannot do for his own protagonist.

Franzen’s refusal to describe the women at the heart of his novel contrasts with "Great Expectations," the book Franzen has chosen as the literary antecedent of "Purity" (boldly placing himself with Charles Dickens among the Great Literary Men™). But if that is where Franzen wishes to reside, he has a lot to learn from Dickens. Even in his digressions, Dickens allows the most minor of his characters the dignity of description, so much so that they often fall into caricature — Miss Havisham in her rotting glory, Estelle with her superior sneer, Mrs. Joe Gargery with her heavy temper, even Georgiana like a fly hovering around wealth, made real by the precise descriptions of his authorial gaze. But caricature, too, is a type of judgement that can render a character flat. In the serialized version of "David Copperfield," Dickens created a ridiculous character named Miss Mowcher, a dwarf. Jane Seymore Hill, also a dwarf and a neighbor of Dickens, was outraged by the depiction. She wrote to Dickens, “I have suffered long and much from my personal deformities but never before at the hands of a man so highly gifted as Charles Dickens and hitherto considered as a Christian and Friend to his fellow Creatures.”

Dickens wrote back to apologize, claiming that he wasn’t basing his character entirely on Hill. Hill then threatened Dickens with a lawsuit. He capitulated. In later chapters, he recast Mowcher in a more sympathetic light, removing her from the flatness of judgment into the fullness of character. Mowcher later tells David Copperfield, “Try not to associate bodily defects with mental, my good friend, except for solid reason … Trust me no more, but trust me no less, than you would trust a full sized woman.”

Author Matt Gallagher has a similar story of his mother taking umbrage at how Tom Wolfe described a woman from Richmond in his novel "A Man in Full." She wrote to Wolfe and received a handwritten apology, admitting that he should have taken the time to develop his character with more thoughtfulness. Franzen, it would seem, is part of a great male literary tradition of obfuscating women on the page — only I’m not sure he is sorry.

There is an argument that Franzen's descriptions, which are used heavily in the section of the novel focusing on Wolf, are part of the bias of the third-person close perspective. Yet, even if the viewpoint of the narrative is the one carrying the judgment, for characters to evolve, descriptions must move beyond conclusion; and yet, the descriptions of the women never do. Nobody — not even the narrator — ever sees them beyond their beauty or what they are wearing. Consequently, the women of the novel lay flat on the page, subject to the whims of the male gaze that created them.

This is also a misstep Franzen has made off the page — he once famously declared that Edith Wharton’s greatest disadvantage was that she wasn’t pretty. Franzen, it seems, can’t see women beyond the binary of beautiful or not. It would seem to be both a personal problem and a writing problem. As Dickens and Wolfe learned, every kind of person should be allowed to be fully actualized on the page. Holding female characters under the thumb of narrative judgment denies them humanity. And this is a contrast to the thesis of "Purity," which argues rather that the modern, digtal world of Facebook, Twitter and web journalism is alienating — bodies, though confounding, are the conduit to redemption. Yet, by not allowing female bodies to be truly seen, Franzen undercuts his own thesis. It is not the Internet that is the alienating force in his novel, but a writer who can see a dog better than his own protagonist.

I recently heard the author Claire Vaye Watkins speak about literary pandering. She noted how much of her life and writing has been spent in service of and subject to the judgments of white men. Her words resonated. I, too, have spent my life watching men do things — write, critique, preach, and pray — all the while wishing I could join in as an equal. I have read all of Franzen’s work. I loved "Freedom" and have spent a lot of time in bars, boozily justifying "The Corrections" to more wary friends. But after reading "Purity" and seeing women’s bodies denied the dignity of full character, I am increasingly beginning to wonder why I continue to watch these men who never see me. Why do I continue to read and lend credence to writing that denies women the dignity of nuance and character? It’s not just a Franzen problem. Men often write about women using the arbitrary ruling of beauty as lazy description. It's bad psychology and bad writing. So why do we continue to laud it?

In his later writing, Dickens seemed to continually grapple with his sins of caricature that had so angered Hill. He wrote a chapter for the serial "Household Works" that included a dwarf character Mr. Chops. Chops is trapped in the world of the sideshow but has an artistic mind. The depiction of Chops is complex and nuanced—Dickens’ writing both shows how people see Chops and who he really is. In his last completed novel "Our Mutual Friend," Dickens wrote the character of Jenny Wren — short, lame, and with a hunched back, she lives in chronic pain. Jenny, too, is locked in a struggle with a body that betrays her, but through the course of the novel, Dickens allows her the full panoply of description and emotion. It would seem that Dickens spent a lifetime making up for his erasure of Hill. He learned. Will we?