Getting the story meant risking sexual assault -- I did it anyway

It was foolhardy of me to get into a stranger's car, knowing what would happen. So why did I go? 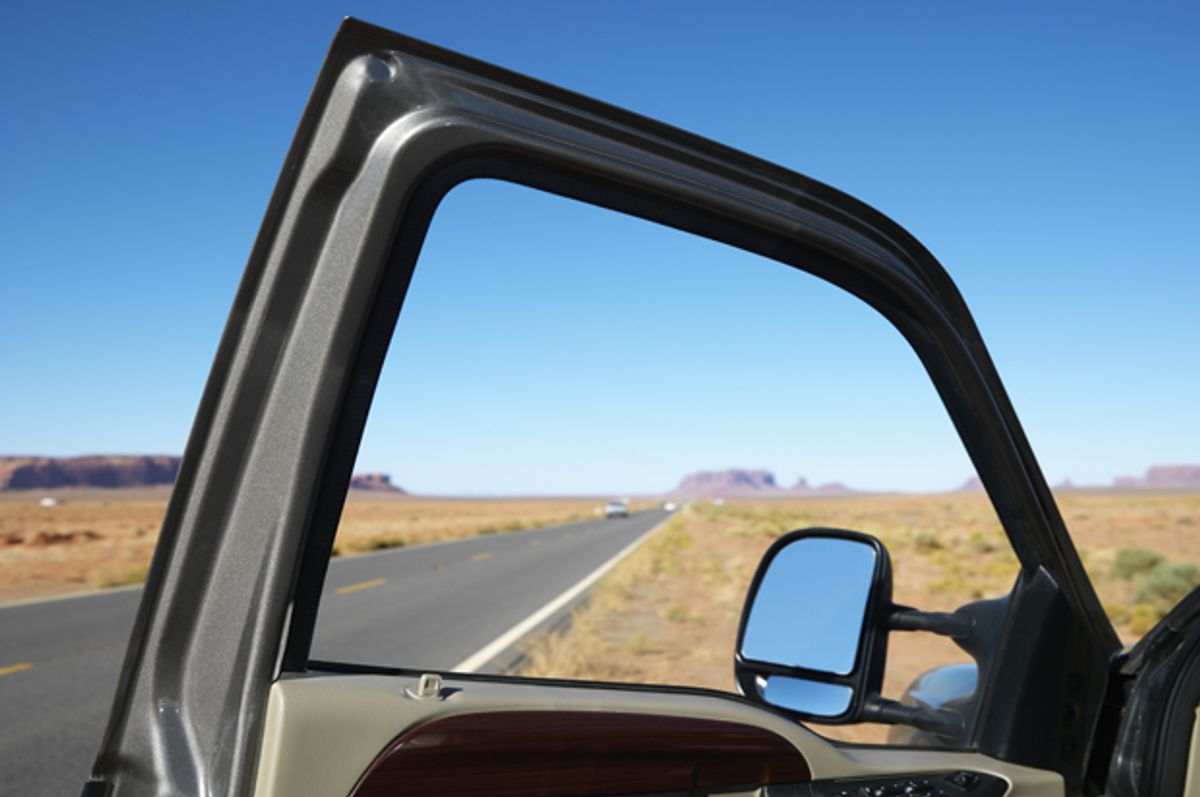 The stranger driving the car was a man I’ll call Kemal. “Kemal the Archaeologist!” he announced, when I met him in a dreary and unpopulated tea house in off-season Assos, a hamlet of rains and ruins on Turkey's Aegean Coast. He wore a flat cap. He had a grey mustache. He used a cane. He drove a beat-up blue Soviet-style Lada. There were five of us in that tea house – me and Kemal and an exasperated cashier and two other old men huddled around an intermittently functional television set.

I was there to do a travel piece on Greek ruins in Turkey – a “light” story before I headed south to report on Syriac Christian refugees in Midyat, a trip that would take me close to the Syrian border, but not foolhardily so.

Of course, my definition of “foolhardy” is hardly normative. Two years ago, I wrote a piece for this website about the experience of traveling as a woman: how my desire to don panama hats and huddle nights in hayricks like Patrick Leigh Fermor was always tempered by an overwhelming consciousness of how being a woman – often traveling in traditionally male-dominated spaces – means being object as much as subject. Since then, I've interviewed Sufi Chechen mystics in a part of Georgia that's made the news for the quantities of young men leaving to fight for ISIS, spent late nights in Istanbul clubs reporting on male belly dancers, hitchhiked border-wards in Armenia's Debed Canyon. I've struggled – maybe even stupidly so – to shed that sense of fear: to be that adventuress – Dervla Murphy, across Afghanistan on a bicycle called Roz, opening her book “Full Tilt” with an account of how she fended off a would-be rapist (“my victim,” she called him) without even removing her revolver from her pocket.

Most of the time, it worked. I told stories I was proud of. I built a career I loved. I had the kind of adventures I once thought unavailable to me. I worked in places where “openness” – the kind of risk-taking, sure-I'll-have-a-drink-and-visit-your-grandmother-in-the-next-village that leads to insightful, honest travel writing – often, in a woman, is read as openness of an entirely different kind. I got the stories. I wrote about curses in the Caucasus, love spells near Izmir.

But at the back of my mind, on every foolhardy journey, I always wondered. Will it be this time?

We were in Assos. It was the off-season. It had been raining for days, and all the ruins I had visited were so overwhelmingly, echoingly silent that I might as well have been staring at them behind museum vitrines. The story I'd wanted to tell – about characters, about people – was still eluding me. The bus to the town I needed to get to next wasn't for another few hours, according to the tea house cashier. Kemal – for a modest fee – offered to drive me, the young madame. He wasn't a driver, no – he was an archaeologist. He'd show me the ruins along the way. He and I could talk: in a demotic, jigsaw variation of German, Turkish, English and French I'm not even sure either of us fully knew. He could talk to me about Assos.

He was about 70. He used a cane. There was one main road between Assos and Ayvacik. It would take hours, but it was walkable. I didn't have much luggage. I could probably take him in a fight.

I knew all this before saying yes. I considered these factors, because every time I get in a car with a stranger in a country I do not know, I mentally go through that “can-I-take-him” checklist to determine whether my decisions are foolhardy or downright stupid.

I said yes because I wanted to learn more about Assos than shattered stone could tell me, because I wanted to learn about him, because, even now, I want to be Patrick Leigh Fermor in a panama hat. I said yes because we went, first, to his house, and there I met his wife, who looked up from sweeping the same footlong step long enough to smile and give me a splitting pomegranate from the overflowing boxes across the courtyard.

I said yes, even though I saw how he looked at me.

I got my story. For 40 minutes, Kemal drove me around the surrounding countryside, pointing out ruins, sarcophagi, Mount Ida in the distance. He rhapsodized in our fractured language about wounds sustained during the PKK conflict (he shows me bullet-holes and scars at his stomach), about religion (“One Allah,” he shakes my hand, after deciding that I am probably Catholic), about his family roots in Lesbos, just over the water, and how the boundaries between Greek and Turk are not always as fixed as they appear.

He stopped the car, as maybe I always knew he would, on the most deserted part of the road.

He put his hand on my knee.

What happened next was, perhaps, no worse – with the benefit of hindsight – than what has happened to me more than once at a New York City bar. An unwelcome stranger makes advances with the full force of his greater quantity of flesh. Only we were on a deserted road. Only I was in his car. Only we were not in New York, and I was the stranger.

I was lucky. My calculated risk –  I can push this man off me if I need to – paid off. The moments that followed – harrowing and terrifying though they were – were not as bad as they could have been. Kemal did not rape me.

I like to think, had I been unsuccessful pushing him off, I could have grabbed the car keys and outrun him. Ayvacik is only three hours on foot. I am not foolish enough to think I could have known this for sure.

Shamed, Kemal tried to convince me it was a friendly kiss he had bestowed on me, not a romantic one.

He drove me to the bus stop. Told me to look him up next time I was in Assos – “Kemal the archaeologist.”

Shaking, I gave him some lira. Shaking, I bought my bus ticket back to Istanbul, had some tea, sat, called my partner, tried and failed to stop shaking.

“I've just done the stupidest thing I've ever done,” I said. “Or the bravest. I don't know.”

Every time I give a talk on being a travel writer – on being a female travel writer – I tell this story. And every time, my students gasp – or ask me: Would you do it again? Is that what we should do, too? And the truth is: I never have an answer for them.

Because the truth is that it was foolhardy of me to get into Kemal’s car, knowing what would happen. The truth is that, as a woman, my experience will always, always be different from a man's occupying that exact same patch of ground, and sexual availability – perceived or otherwise – is part of how I present in the world.

When I wrote up the story, I wrote about the drive, Mount Ida, Kemal the paradigmatic eccentric local expert on all things antiquarian. I elided Kemal’s attempt to get on top of me into a single, wry, Dervla-Murphy-style, aside: “he is well into his 70's, although that does not prevent him from making a few abortive romantic overtures to me as we drive.” I didn't want to make my story about Turkey into a story about assault – to make what I had wanted to be a universal story into a story that I knew – rightly or wrongly – would code as female.

That part I regret.

As a writer, as a reporter, as a “travel writer” – an often anodyne term – I tell stories about people, about culture, to draw from my own experiences examples that are at once illustrative and concrete. I write about the specific – a chicken-wing-eating competition in Philadelphia, an eccentric Trotskyite bookstore-owner in Antalya, a homeless veteran-mystic in Mostar – in the hopes of illuminating, rather than defining, the general.

And the specific is as rooted in the specificity of who I am as in that of the people I encounter. My stories often involve women – a population to which other travel writers, depending on circumstance, may not have access; so too do they involve religion – my background as a theologian, I find, earns me a degree of trust among the Armenian Mormons and Syriac Christians and Uzbek Jews who unburden to me their narratives of faith.

They are not the only stories that exist in the places I work in, but they are the stories that – by virtue of context – happen before, to, and around me. To pretend that my experiences of travel are universal is not merely to be dull – and to write dully as a result – but also to assume that any one account of a foreign place is normative. Traveling while female – if it has taught me anything – has taught me that it is not.

I have sympathy for Kemal – for the way he hung his head when he said “old, old” – even as I am repulsed by him. I saw a side of him that was despicable, but which, nevertheless, was human, and true.

My experience in Turkey was just one of many I've had, before and since. It's deeply rooted in my gender – for better and for worse – and it is, likewise, the kind of story I as a writer want to tell, because it is deeply illustrative of what it means for one woman, at one moment in time, to meet an aging archaeologist in a tea house. What it tells, I hope, is not that to travel while female is inherently risky, or that the “foreign” world is an inherently dangerous one for women (after all, my least consensual sexual encounter took place not in Turkey or the Caucasus but in an acquaintance's North London bedsit), but rather that all travel – and all narratives of travel – are subjective ones: stories not of a place but of the people, foreign and local alike, who find themselves in it.

I will probably never stop getting in strangers' cars – once I have ascertained, to the best of my ability, that the benefits outweigh the risks. I will never stop asking myself will this be the time? And I will never stop chasing stories.

The last time I told the story of Kemal – at a talk in Oxford last week – one of my students raised her hand.

“Can't you just travel dressed as a man?” she asked.

It's a romantic notion – something out of the Fermor-era narrative playbook. It's the sort of thing a certain type of adventuress might, some decade, have done.

But I wouldn't do it, I told her. Writing as a woman means writing, honestly and concretely, about my experiences of place – experiences that include Kemal stopping his car to grab my thigh and kiss me just as they include his wife's sweeping on the staircase, her gift of a pomegranate. To write as a man, to be treated as a man, might make my life easier. But it also would be to imply that a man's story of that same car ride with Kemal – if Kemal ever offered him a lift at all – would be the normative story: the only story that would ever get told.

But I am honest, too, about what that subjectivity means for me.

If offered the choice about whether or not to get in that car again, I would.

Tara Isabella Burton's work has appeared in National Geographic, National Geographic Traveler, Al Jazeera, the BBC, The Atlantic, and more. In 2012 she won The Spectator's Shiva Naipaul Memorial Prize for travel writing. She has recently completed a novel.