The most awkward moments of the 2015 VMAs 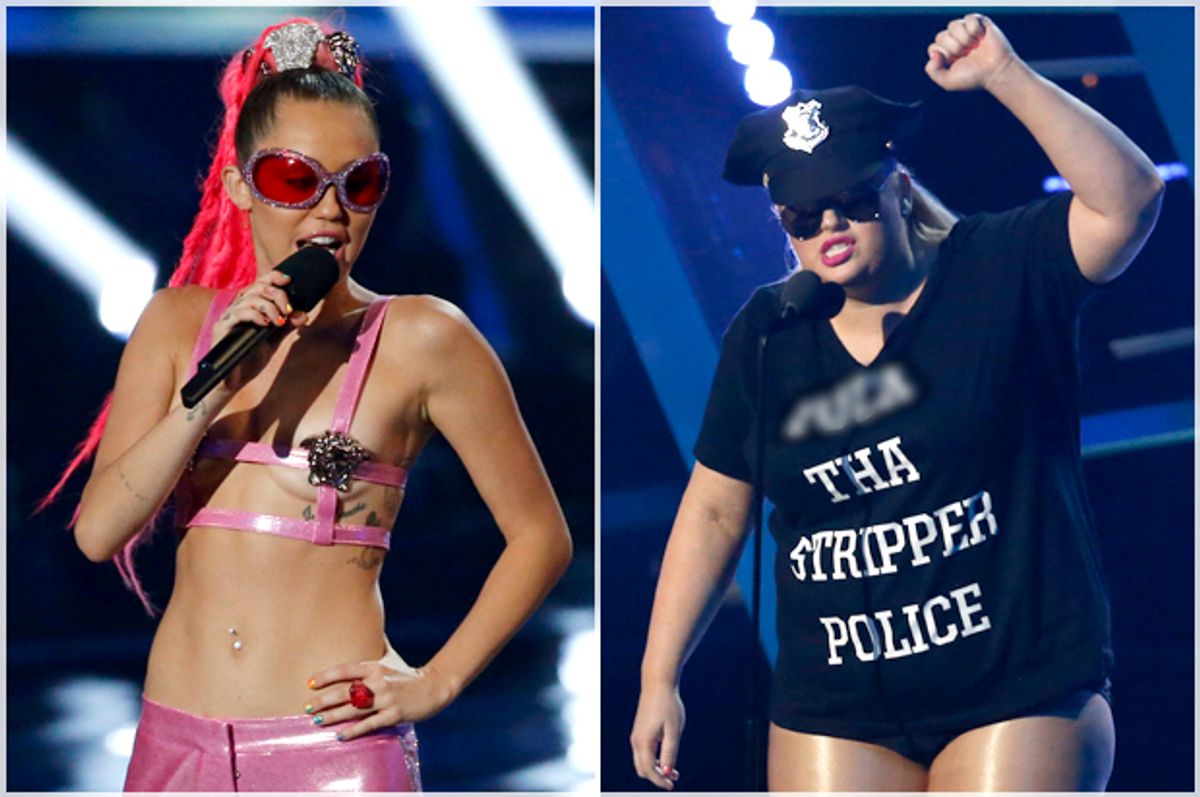 As we all know by now, the VMAs are much less about the music videos than the human drama onstage: The gaffes, feuds, slip-ups and controversies that are bound to occur when you throw a bunch of pop culture’s most entertaining hot-heads and egotists in one room and let the cameras roll. Here's a look at the most awkward moments from last night's intermittently-engaging, ultimately interminable three-hour telecast:

Macklemore is reliably polarizing, and his frenetic performance of “Downtown” — which involved the white rapper being clutched by the hands and feet and dragged along the stage while other dancers leaped over him -- was instant fodder for Mackle-haters.

Kanye, for one, was not impressed:

While Taylor and Nicki may have quashed their Bad Blood last night, tensions flared between Nicki and Miley after Nicki called the host a “b*tch” for insulting her in the press last week.

People online were not pleased with Rebel Wilson's joke about police brutality, which felt particularly trivializing and tone-deaf given the many powerful #blacklivesmatter tributes that took place during the telecast.

Some people couldn’t get enough of Kanye’s bizarre, rambling, half-apologetic, half-provocative stand-up routine / TED talk / stump speech, while the half of the population more inclined to boo 'Ye at a baseball game just wished the guy would shut up.

When Miley said "nothing says turnt like Hailee Steinfeld"

There are a number of words I would use to describe Hailee Steinfeld — “the girl who sings 'Flashlight' in the 'Pitch Perfect' sequel” are ten appropriate ones — but “turnt” isn’t really the first one that cames to mind.

Miley letting her nip "slip" on live TV is nothing if not predictable -- and, given Miley's track record when it comes to "freeing the nipple," hardly qualifies as controversial anymore (although we will clarify that the gif below is still very, very NSFW).

(So don't scroll down if you don't want to see it.)

(This is your final warning.)

After performing at the VMAs for the first time in five years, the Biebs -- who finally seems to be back in the industry's good graces after a tumultuous few years -- broke down into tears.

Aw it’s okay, Justin, a hairdresser will be able to fix that, no problem!

All of Miley’s skits were awful, but the bit where she smoked weed with Snoop Dogg (hey, did you guys know Miley likes weed?) and then referred to Snoop as her “mammy” definitely took the cake.

The fact that former VMA golden girl Iggy Azealea was relegated to a footnote in Demi Lovato’s parking lot set feels like the nail in the coffin for the much-maligned Aussie star.