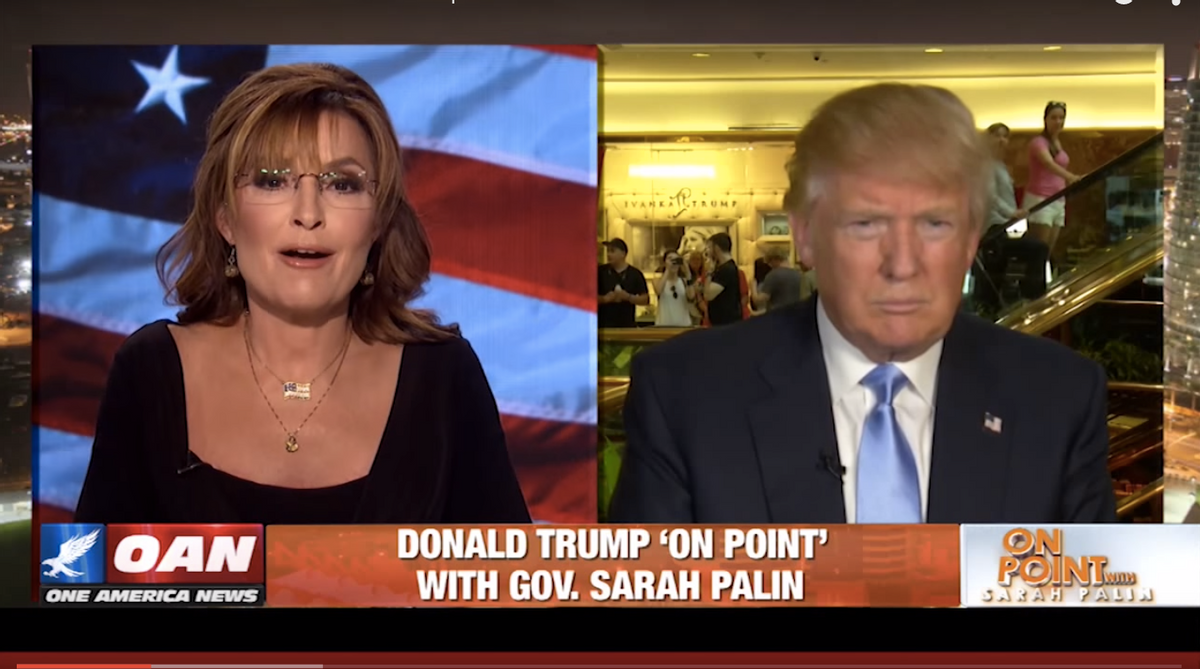 By way of background, One America News was launched in 2013 and is operated by Herring Broadcasting and CEO Robert Herring, most famous for offering Michael Schiavo a million dollars in 2005 in exchange for giving up his medical decision-making rights to his wife, Terri Schiavo, who was in a persistent vegetative state and who Michael wished to remove from life support.

The conservative-leaning network is supposed to compete with Fox News Channel, although so far it might as well broadcast the sound of crickets chirping. But Friday night, One America News might've actually gained some ratings ground when Palin hosted Republican presidential front-runner Donald Trump for a too-brief interview. The conversation was basically what you would expect.

Next, see if you can decipher what Palin said in her introduction to the interview:

"I've said it. Since the day he made the sacrifice to hit the campaign trail, voters crave the anti-status quo politician. They want results. They need a fighter. They need someone to fire all those political correct police."

Not for nothing, but this was scripted and read from a teleprompter.

Palin continued: "He wants to connect with those who show up at the polls and elect the next leader of the free world." Oh, really? That's perfect since the other two-dozen presidential candidates on both sides of the aisle have no interest whatsoever in connecting with voters. I'm so glad Trump has stepped up and decided to reach out to, you know, voters.

Then the interview itself began, and Palin asked Trump the following: "How is our economy really doing, especially reacting to world markets?"

Trump's response was to stare into the camera and lie about the number of unemployed Americans. "If you really look at the economy, Sarah, it's been terrible. We have 93 million people out of work." No, actually, the economy has been growing steadily since the deepest recession since the Great Depression. Unemployment has been cut in half; GDP has been growing quarter-by-quarter; the deficit has been cut by more than a trillion dollars; housing has recovered; American manufacturing is booming; and the number of uninsured Americans has dropped to its lowest level in a decade.

As for that 93-million figure: According to Bloomberg, if 93 million people were out of work, the unemployment rate would be 59 percent. The actual number of unemployed Americans who are part of the 157 million person labor force (as of July) -- that's Americans who aren't disabled, retired or children -- is around eight million. Not 93 million.

Then, without a hint of irony, Trump blurted, "We've lost a tremendous amount of jobs to China, Mexico and so many other places." Of course, Trump himself has exploited workers in China, specifically, and has already been called out for it. (His line of neckties sold at Macy's are manufactured in China, for example.) But for a candidate who does nothing but blurt out whatever pops into his orange skull, facts and consistency don't matter.

So, then, after Trump lied twice in his first answer, Palin had the nerve to accuse the Obama White House of not telling the truth about the "true state of the economy," saying, "The White House is not truthful." Well okay, Mr. Trump, tell me again about the 59 percent unemployment rate, then explain how you plan to reduce it by, I don't know, forcing children and old people into the workforce.

The next portion of the segment focused on the Veteran's Administration, which was perfect opportunity for Palin and Trump to pander to the military and to justify the self-satirical American flag backdrop behind Palin. We'll circle back to this section presently.

Regarding his spat with Univision's Jorge Ramos, Palin asked Trump: "Where'd you get your guts for that sort of necessary confrontation?" Um, where did he get his what? Is that even a question? Trump replied by, once again, lying, "[Ramos] was screaming and ranting and raving." There of course was no screaming by Ramos, and Trump didn't call on anyone specifically, so Ramos stood and simply asked a question. But Trump, who apparently has "guts," decided to kick a reporter out of room rather than to answer a tough question. So much for being a "fighter."

Palin's next question should be utterly baffling to anyone who lived through the Bush years:

"So you get hit with these gotchas, like most conservatives do. For instance, they [sic] asking what's your favorite Bible verse, and I listened to that going 'What?' Do they ask Hillary that? What does it have to do with running for the office of the presidency? Is it anybody's business?"

If you're keeping track at home, the party that's been shrieking about religious freedom in the context of suppressing same-sex marriage, and the party that's made a big deal out of religious litmus tests for public officials including its own Mitt Romney as well as, obviously, Barack Obama, is now griping about how Trump was asked for his favorite Bible verse. I mean, I'm all for getting religion out of politics, but I never thought Palin and Trump would line up as allies. But there it is. Asking about the Bible is a "gotcha" question, according to Palin and Trump. Good to know.

Other than a final softball question about where Trump was headed next, that's it -- that was the extent of the interview.

Here's what was truly baffling about the whole thing. I'm not sure if any Trump fanboys noticed, but other than a few random criticisms of the Obama administration, it was a relatively liberal-leaning interview. Let's recap: Trump proposed more infrastructure spending on roads and bridges; Palin reminded us that Trump would like to raise his own taxes; Trump said he wanted to spend more money on a particular government agency, the Veterans administration, which is, by definition, a socialized program; and they both whined about being asked a question on the Bible and personal religious views. And yet it was an interview between two self-identified far-right conservatives.

Why so many left-leaning remarks? It doesn't matter. Trump has inaugurated the era of inchoate blurting in presidential politics. It's difficult to tell with Palin, but Trump has no core values and therefore can get away with saying whatever nonsense tumbles out of his puffy face. His disciples, meanwhile, are so deeply entrenched inside their bubble they don't realize when Trump is flailing -- blurting things that contradict previous blurts or, in this case, blurting things that are technically Democratic positions. It's times like these when I truly believe that Trump's support comes from two places: 1) immigrant-hating racists, and 2) people who like his reality TV show. Combine that with his total lack of values and it sums up his popularity in a nutshell. The idea of public figures as "famous-for-being-famous" has transcended reality television and entered presidential politics. And both Trump and Palin are the primary suspects.