The Trumps of August: GOP presidential hopefuls close out summer with a coordinated burst of stupid

Walker, Huckabee and Christie stumble into autumn by trying to out-crazy Donald Trump on immigration 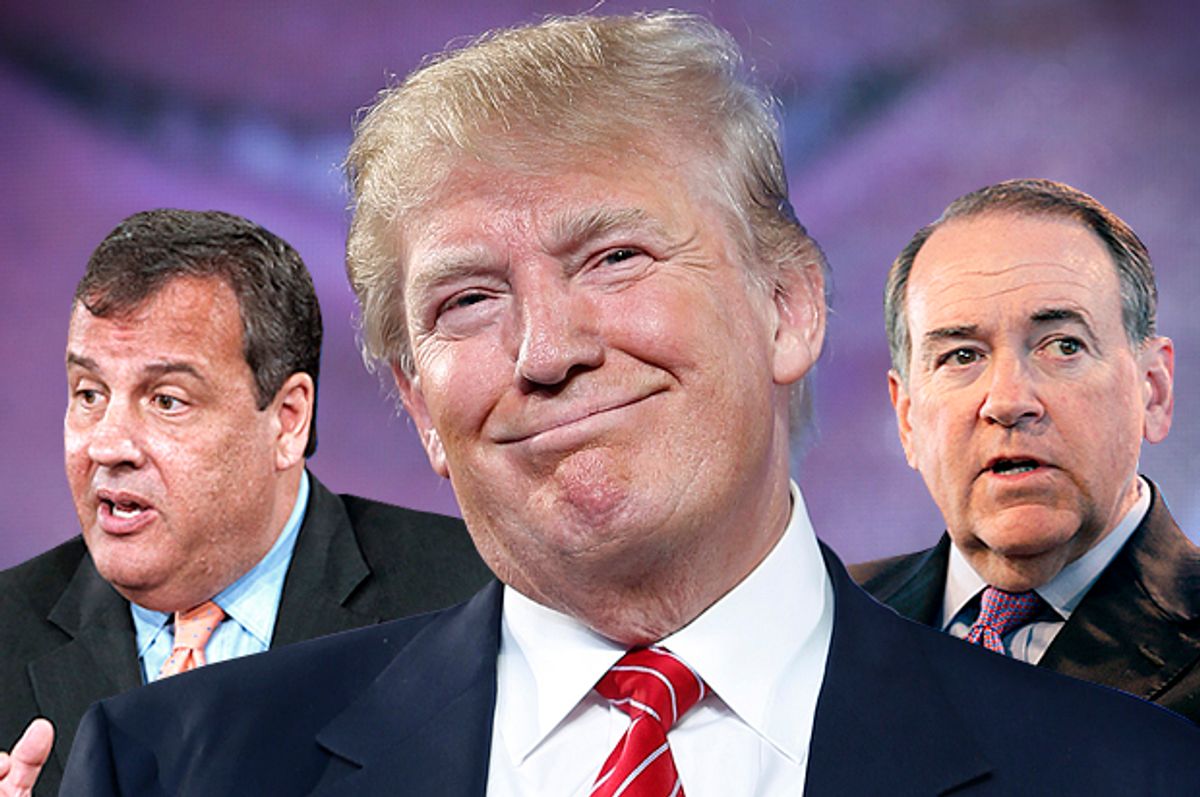 August is a difficult month when trying to write about national politics. Congress goes on vacation for the entire month and people like me who spend their days hand-crafting piping-hot political takes are left without a reliable source of material. Thankfully, or perhaps tragically, the 943 candidates for the Republican presidential nomination helped fill that void by spending the entire month trying, and failing, to steal media attention from Donald Trump by saying and doing incredibly stupid things. As the month reached its end, we arrived at a crescendo of sorts in which several Republican presidential wannabes made utter fools of themselves all at once by taking absurd, hard-line positions on immigration to try to keep pace with the Trump nativist dynamo.

Let’s start with Mike Huckabee, whose polling numbers have been slowly and steadily eroding over the last few months – he’s down to low single digits and at the bottom of what could be considered the middle tier of Republican candidates. His campaign took to Twitter yesterday to test out a new line on immigration, and oh dear lord is it dumb.

Walls keep things out, you see. That’s what they do. And immigrants are just like ocean waves. They’ll keep going until you put a physical obstacle in their path, at which point they stop and disappear forever. Problem solved. Good job, wall.

Actually, when it comes to undocumented immigrants, walls tend to have the opposite effect – they keep them in the country, as increased border security measures make it just as difficult to leave as to enter. “Militarization of the border transformed what had been a circular flow of workers going overwhelmingly to just three states — California, Texas, and Illinois — into a much larger settled population of families living across all 50 U.S. states,” Douglas Massey wrote for Foreign Policy. “Not a good outcome for a policy whose goal was the limitation and control of immigration.”

Huckabee’s treatment of immigrants as a destructive force of nature was matched in callousness by New Jersey Gov. Chris Christie, who promised that as president he would hire the founder of FedEx to teach Immigration and Customs Enforcement to track immigrants like packages. In the Christie vision, there will apparently be a massive surveillance apparatus in place that will keep a constant eye on immigrants who are in the country legally, and when their visas are about to expire they’ll be tracked down by a government agent who will politely, but firmly, tell them to get the hell out.

What would this look like in practice? No one seems to know, least of all Chris Christie, who said on Fox News Sunday that it can probably be done with “technology” that only FedEx can provide. “We can do it. And we should bring in the folks from FedEx to use the technology to be able to do it,” he said. “There's nothing wrong with that. And I don't mean people are packages. So, let's not be ridiculous.” Sorry, Chris, but the “let’s not be ridiculous” ship sailed a while ago.

Standing atop both these fellows in terms of late-August immigration nonsense, however, is Scott Walker, the Republican governor of Wisconsin whose presidential candidacy is disintegrating before our very eyes. Appearing on “Meet the Press,” he signaled openness to talking about a new border wall. With Canada.

It’s important to maintain a bit of perspective to get a full sense of the policy debate Walker is bumbling into. Building a fence along the Mexican border is an unrealistic proposition given its length, terrain challenges, the costs of construction and maintenance, and the fact that it wouldn’t work. Walker said he wanted to have a discussion about a project that would have those same insurmountable problems, only they’d be hugely magnified given that our border with Canada is nearly three times longer. So erecting a fence along the Canadian border is indeed a more ludicrous idea than constructing one along the Mexican frontier, in the same way that building a ladder to Mars is more ridiculous than building a ladder to the moon.

What Walker is doing here is what we sophisticated political analysts call “pandering.” And he’s doing it very badly, in keeping with his well-established track record of bad pandering on immigration. When someone asks you if you’re open to building a 5,000-plus-mile fence to keep immigrants from sneaking in, they are quite clearly laying a trap, and the best thing to do is dodge. Blurp up some noncommittal garbage about how border security is the most important issue in the immigration debate and then pivot to attacking Barack Obama for doing amnesty by fiat. One of the least productive things you can do is say it’s something worth looking at.

But that’s precisely what Walker did because he doesn’t have a firm grasp of what his immigration message is, and he’s rattled by Trump, who seems to be vacuuming up the support Walker needs in states like Iowa. They’re all rattled by Trump – even Jeb Bush, who started the month determined to ignore Trump and ended it getting into ill-advised slap fights with him. They let him set the course of the immigration debate within the GOP, and by trying to win the argument on Trump’s terms, they’ve turned what was already a problematic issue for Republicans into a spectacular and ugly farce.