The 2016 Republican candidate previewed his energy policy today. Are you sitting down? 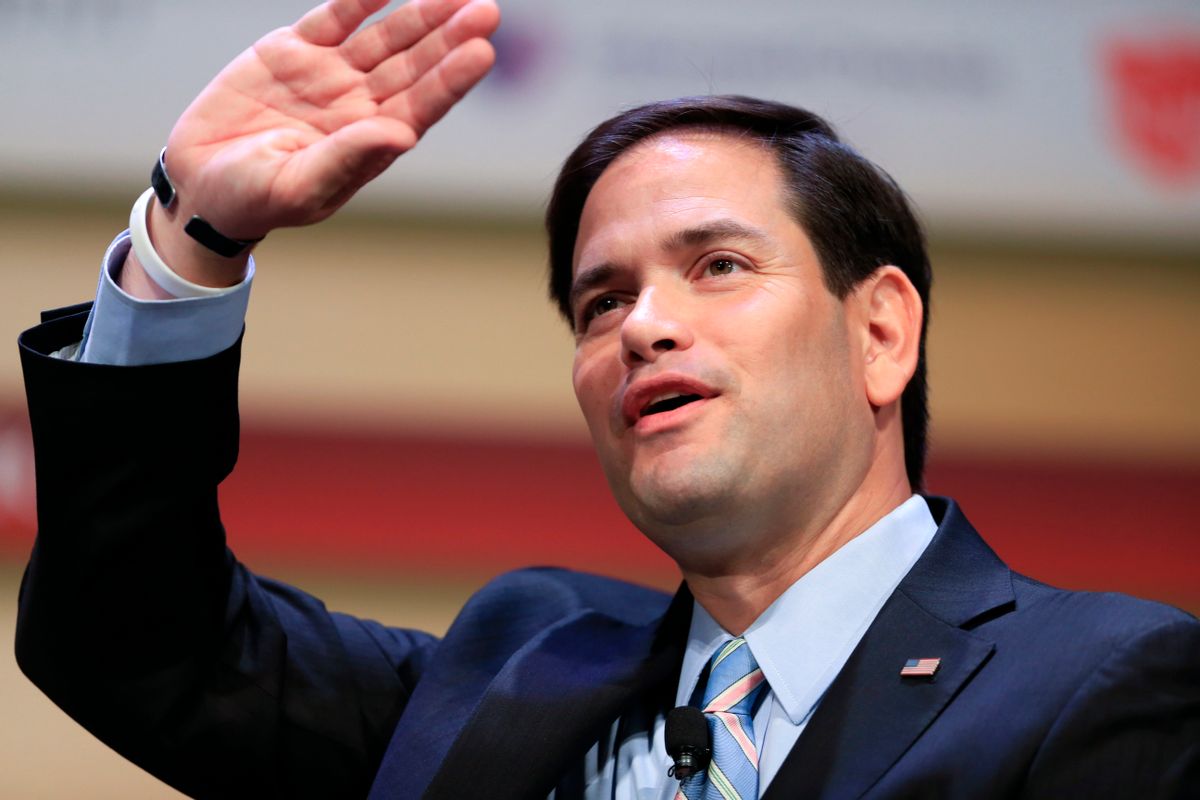 Apologies to Marco Rubio. In my comprehensive guide to climate denial in the 2016 GOP primaries, I had the Florida senator categorized -- along with Jeb Bush, Bobby Jindal and Rick Santorum -- as believing something along the lines of, "Climate change is happening, but really, anything can be causing it, so I don’t need to have a plan."

But it turns out, Rubio is far less passive than I assumed. Not only does the presidential hopeful not want to address the causes of climate change, he's determined to roll back everything President Obama's done towards those ends thus far.

It's quite the vision, which Rubio previewed in advance of a speech he's giving Wednesday afternoon. “I will stop the EPA’s Clean Power Plan, which, if enacted, would have a devastating impact on affordable energy in exchange for little to no environmental benefit,” he plans to say, in complete contradiction to the facts. He refers to the EPA plan as "one of the most expensive and costly regulations ever created," despite evidence that it will actually save money for consumers -- and save thousands of lives to boot.

Rubio's also gunning to lift the current ban on exporting crude oil. It's a plan that would incentivize companies to increase their fossil fuel production and that, according to studies conducted by the oil industry and its advocates, could result in upwards of 515 million metric tons of carbon dioxide being spewed into the atmosphere each year -- the equivalent of putting an additional 108 million cars on the road. Rubio's all for that: in fact, he also plans to lift all federal regulations that prevent drilling on public lands, just to make it easier for Big Oil and frackers to get at everything they can. (According to a recent report, the federal government could keep a total of 450 billion tons of carbon from contributing to climate change by ending the practice of leasing federal lands for fossil fuel production altogether. Rubio, presumably, wouldn't even be for the scant rules we do have for keeping such production somewhat safe.)

And, naturally, Rubio's determined to put all power to regulate energy production into the hands of the states. In an op-ed for the National Review, he uses Oklahoma -- whose officials took ages just to admit that wastewater injection from fracking was contributing to an alarming rise in earthquakes -- as "proof that states don’t need Washington’s “help” to seize their energy potential."

Rubio's already made it clear that he's not buying the science of climate change, so nothing of the plans he's elaborating on now (which he characterizes as "balancing" environmental concerns with the economy) should come as a surprise. But just when you think you've seen the depth of a candidate's delusions, he'll say something like this: "I believe it is conservatives, not liberals, who ultimately have the more sustainable and forward-looking agenda.”