Our viral ruin: Our thirst for maximum "likes" is killing live shows and pop music 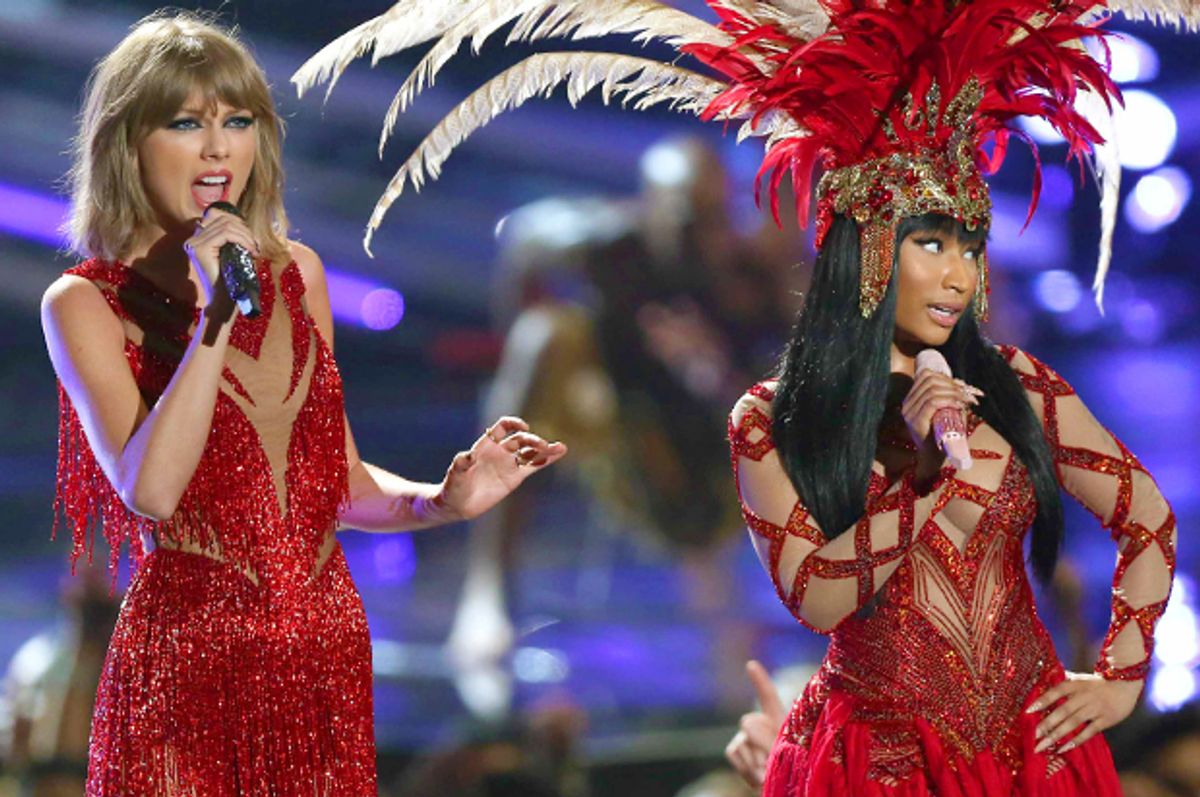 There were so many problematic things about this year’s VMAs, it’s difficult to know where to start. Still, the avalanche of nuanced think pieces that sprouted up in the show’s wake certainly zeroed in on the biggest problems with host Miley Cyrus, Rebel Wilson’s tone-deaf take on police brutality and an abundance of cringeworthy moments. The Washington Post’s Soraya Nadia McDonald pointed out the disconnect between the channel’s commitment to “educate people about bias based on race, gender and sexuality, and eradicate it” and the awards show itself, which “played into the larger theme of Cyrus using people as props to communicate what she sees as her own subversiveness”—and, specifically, how she’s “gleefully using black men, and rappers in particular, as shorthand for everything that terrifies white conservative America.”

The Verge’s Emily Yoshida further criticized Cyrus for her self-centered hosting performance and cultural ignorance, especially after Nicki Minaj called her out on her racially insensitive New York Times remarks: “She looked like the rich girl whose birthday party everyone’s parents forced them to go to, if that girl was also wearing white dreadlocks while defending herself from being implicated in systemic pop cultural racism.” And in the Village Voice, Hilary Hughes summed up the whole shebang thusly: “It was an awards show brought about by the clickbait age, a thirsty, shameless onslaught of bad banter and bewildering performances that insulted everyone involved by downplaying their achievements for the sake of outrage and humiliation.”

Hughes’ assessment also adroitly sums up today’s live performance landscape, where angling to go viral and orchestrating grand gestures—the more dramatic, the better—are the dominant promotional strategies. Last weekend’s VMAs were a manifestation of this phenomenon writ large, from MTV’s online summaries of the painful-to-watch skits (“miley intros an epic selfie,” “miley swims in spaghetti for a selfie”) to Cyrus breathlessly celebrating getting Kim Kardashian—“The most followed person on Instagram!”—into a selfie. That none of these events are actually interesting or notable enough to deserve such elevated treatment is a separate issue, although it’s also certainly a consequence of viral media culture.

However, it’s unfair to place blame on Cyrus alone for this trend. At the VMAs, Taylor Swift was featured interacting with both Nicki Minaj and Kanye West, two artists with whom she’s had well-publicized beefs; it’s safe to say the pairings were no accident, but a way to drum up attention and garner clips for instant commentary. (That West torpedoed this aim with his epic speech was a rather delightful result.) Swift’s “1989” tour has also become a nightly excuse to create a bite-sized shareable moment: What started off as simple catwalk appearances from her friends has turned into elaborate mid-show performances of current and past Top 40 hits, or notable pop cultural touchstones.

The idea of faux surprise also drives the skits featured on Jimmy Fallon's "The Tonight Show." Through the use of strategic games (beer pong! lip sync battles! Password!) and celebrity pairings, the show creates situations full of contrived wackiness and absurdity that look great on YouTube the next morning, but have little lingering cultural impact. Reality shows also employ activities that are carefully designed to amplify drama and tension for the sake of good TV (or, barring that, crews wield a skillful post-production and/or editing touch). This phenomenon isn’t limited to music or TV, either: From surprise reunions of military spouses at an NFL game to elaborate wedding proposals to pregnancy announcements, major life milestones that used to be private occasions have morphed into meticulously planned public events. Calculated spontaneity is the new normal.

What do we lose when organic entertainment experiences are increasingly an illusion, when so-called surprises are actually elaborate constructions? For starters, it’s hard to differentiate between what’s real and what’s fake, creating universal skepticism around many events and making it difficult to ascertain what’s actually newsworthy. Is that conflict or controversy actually real and worth pursuing—or is it fabricated for the sake of attention? Increasingly, it’s hard to say—and doesn’t seem to matter, because not covering the drama is too risky. (Minaj calling out Cyrus at the VMAs, however? Unplanned, executive producer Van Toffler told Billboard.) As mentioned above, an emphasis on this kind of viral entertainment is absolutely a byproduct of an online culture predicated on and fed by social content. These quick-and-dirty news bits or videos are meant to get an avalanche of eyeballs (or ad dollars) and then fade from public consciousness as the next shareable piece sprouts up.

Of course, this doesn’t mean these cat videos or Swift guest appearances can’t be humorous or enjoyable—there’s a reason this whole process feels like the equivalent of cyclic sugar rushes, repeated ad nauseam—but it’s also incredibly fatiguing. When viral entertainment is based on extremes, whether good or bad, experiencing these moments becomes a wearying experience, one where outrage or pleasure is dulled by constant exposure. And when these moments are no longer unique, they lose their enduring influence—an especially pernicious blow to comedy bits, music performances and TV skits. When such content is only required to grab people’s attention by any means necessary—or is calibrated to be a fleeting experience expected to provoke equally ephemeral reactions and responses—quality control suffers.

This is important, because historically, comedy and music have been substantive enough to have great impact, either by exposing (or reflecting) cultural shortcomings or fomenting social change. If these edges are blunted so something can cut through the static for a quick fix, it’s a profound shift in perspective and intent. Certainly there are exceptions to the viral-as-rule; think about the abundance of Jon Stewart barbs from "The Daily Show" passed around, or Killer Mike’s gripping, post-Ferguson Grand Jury monologue before Run the Jewels’ late 2014 St. Louis show. But these kinds of clips require far more engagement and brain activity than your garden-variety pop star meltdown or flash of nudity.

And so we’re left with the Technicolor car crash known as the VMAs, whose misguided attempts at provocation and shareable moments devolved into lame skits about getting high. What’s frustrating, as Hughes points out in the Village Voice piece, is that pop music doesn’t have to be this vapid. In 2014 and 2015 “pop had something to say. It had teeth. It had sounds that deviated from Pharrell's hook of the week and conversation topics that resonated with fans of every age and background. It had substance, and that substance was jilted in favor of focusing on an artist who in her opening monologue joked about spending more time on Instagram than she did writing or playing music.” Not pandering to the lowest common denominator is possible in the realm of viral entertainment—if only we look below the surface.