If Republican leaders trust Donald Trump to stick to his word, they’re even dumber than they seem 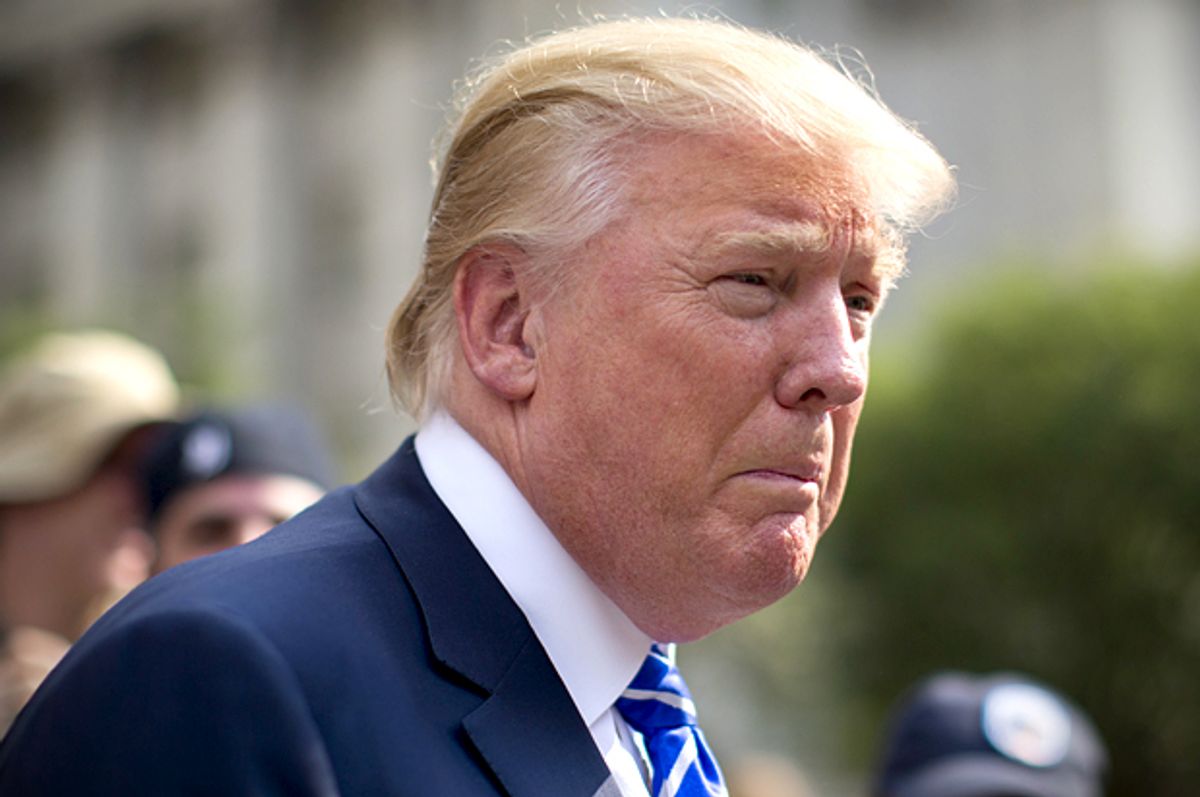 Politico’s Mike Allen has an EXCLUSIVE: “Trump will sign GOP loyalty pledge.” If you’ve been following this at home, you know some state party leaders think they’ve come up with a way to corral Trump and keep him from making a third party run if he loses the Republican nomination: Make him pledge to support the eventual nominee as a condition of getting on their primary ballot. The Republican National Committee is said to be mulling a similar strategy.

Trump has so far refused to do that, most notably in the Aug. 6 Fox debate. "I cannot say I have to respect the person that, if it's not me, the person that wins," Trump said. "I can totally make the pledge if I'm a nominee,"

Since then, though, he’s played down his threat to run as an independent, saying he only held it out as “leverage” if the GOP didn’t treat him well – and the GOP is treating him well. No more urgent calls from RNC chair Reince Priebus asking him to tone down his rhetoric, apparently. In fact, Priebus backed out of a post-debate “Face the Nation” appearance to avoid weighing in on the Trump-Megyn Kelly feud, and the candidate’s hideous misogyny.

Still, the South Carolina primary rules require candidates to pledge to support the GOP nominee, and officials in Virginia and North Carolina have discussed adopting something similar. On Tuesday, Politico reported that the RNC had begun to quietly circulate a similar pledge among all the GOP presidential candidates.

Trump has said he’ll make his decision about the South Carolina pledge by the end of September – but Allen reports that “a close associate tells Politico” the GOP frontrunner will sign the pledge today, Thursday.

Of course, in the third and last paragraph of Allen’s short “scoop,” campaign manager Corey Lewandowski denies the report. “I don’t think you can ‘expect’ ANYTHING from Mr. Trump,” Lewandowski told Allen “in a phone interview.” Why the word “expect” is in quotes and the word “anything” is capitalized, based on a phone interview, is a question Allen leaves unanswered, but it certainly adds to the drama.

I’d take Lewandowski at his word. Allen’s scoop may be accurate, and Trump may well make a promise to forego a third party bid, but intentionally or not, the campaign manager seems to be warning the GOP not to expect him to keep it.

Why would anyone expect that of Trump? His three marriages and four bankruptcies indicate a rather loose bond to his own word.

In the Fox debate, he defended his bankruptcies, which stiffed lenders and investors, by savaging bankers, telling Chris Wallace, “These lenders aren't babies, Chris, those lenders are total killers!” What stops Trump from using similar logic if he feels the GOP is somehow unfair and he loses his bid? “”Reince Priebus isn’t a baby, he’s a total killer!”

Trump has a meeting and press conference with Priebus scheduled for today. We’ll learn soon enough if Allen got the scoop, and Trump signed the loyalty pledge. But it may not matter either way. The Trump bid is gaining steam, and anyone who continues to rule out the chance he’ll be the nominee isn’t paying attention. He’s already pledge to support himself if he’s the nominee.

And if he’s not the nominee, anyone who “expects” him to keep his word to the party should talk to one of his first two wives.