"Narcos" could be our next "The Wire": Netflix's sweeping true story of Pablo Escobar's empire captivates 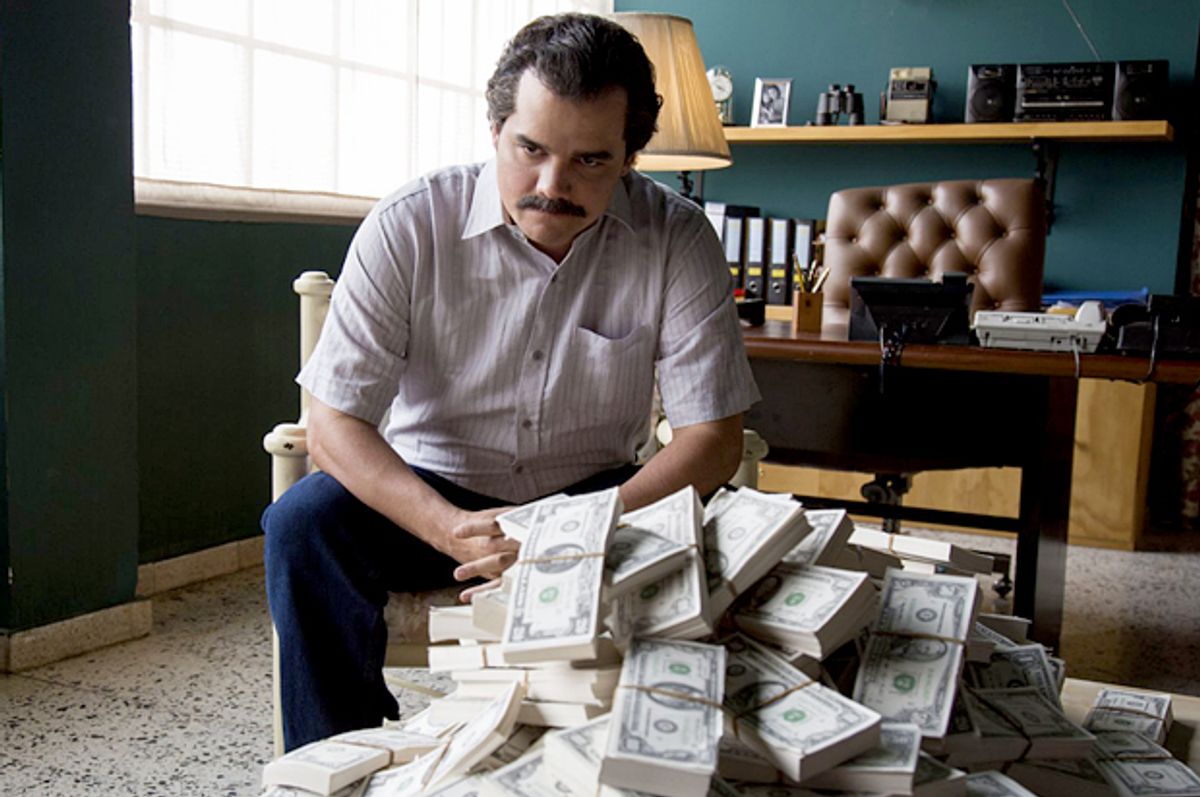 Here is what I have learned, after watching all 10 episodes of a show that tries to tell the story of the incredible wealth and breathtaking violence at the heart of Pablo Escobar’s cocaine empire: “Narcos” has a great forest, but problematic trees.

In terms of the nitty-gritty of making a television show—elements like the establishment and development of storytelling devices—the Netflix original, whose 10 episodes dropped on the streaming platform last Friday, makes a few crucial mistakes. The first episode is the unfortunate showcase of most of these missteps—including the most irritating one, a bizarre reliance on a narrator who is trying so hard to impress upon the audience his white, American maleness that he comes off as a caricature, not a character. In the second episode, a woman who has been repeatedly gang-raped—and is about to be raped again—is posed and lit so as to look as sexy as possible, right before she is rescued. (We then never see her again.) And in what is perhaps the most semiotically charged mistake, the show’s villain uses a gun as a dildo, to physically stimulate his mistress to orgasm.

These are mistakes. They’re silly storytelling pitfalls, the characteristics of a hack job. As Mo Ryan outlined her in piece last week on binge-watching, Netflix and other up-and-coming networks have championed individuality and flexibility over corporate supervision, and the result has been programming that are decidedly inconsistent. Shows need notes, she concludes; not every executive’s comment is going to hurt the health of the show.

“Narcos,” for sure, needed notes. To belabor my metaphor, its trees are frustrating enough that it’s possible to miss the forest. The angle of entry for its three creators is a little more Martin Scorsese than is necessary—we do not always need a narrator to make meandering observations on magical realism, or observe how right and wrong are difficult poles to find in Colombia, or that in war, sometimes difficult decisions must be made. (We especially don’t need the most farmboy-sounding narrator of all time to make those pronouncements.)

But once I was able to accept the quirks of “Narcos,” the show really opened up for me; by the end of the third episode, I was captivated, and by the end of episode 6, I was hooked. Beyond the storytelling quirks—and beyond even the overly earnest attempts to replicate Scorsese’s “Goodfellas”—lies an incredible and possibly even groundbreaking story, a documentary/miniseries about one of the world’s most horrible villains. If you, like me, have a minimal understanding of this era in Colombian history, it’s quite a journey into the horrors of the narcotics trade in the ‘80s.

In the midst of storytelling mistakes, “Narcos” is offering a critical examination of a slice of history that not just our government but also America’s population at large was quite complicit in—the illegal trade of cocaine, after all, fed American demand directly. “Narcos” refrains from either framing its American DEA agents as heroes or painting Escobar with the villain’s edit; the story sticks to the facts, and tries to offer as much context for them as possible. Pablo Escobar was incredibly successful by being incredibly ruthless; he was willing to do what no one else would—bombing street corners, assassinating politicians, taking hostages, and victimizing children. There was a point at which logic ceased to play a role in his violence, but that point came late in his career. Most of the time, Escobar’s reign of terror was about money—getting it, hoarding it, spending it, keeping it. Anyone who got in his way courted (and often met) death. His operation shook and at times toppled the very foundations of governance in Colombia, as he bought, kidnapped or killed anyone who crossed his path.

At its core, “Narcos” has a lot of the appeal of David Simon’s “Show Me a Hero,” or even beyond that, his seminal “The Wire.” And that’s because the story is true. It is not an ersatz interpretation of similar themes; it’s (frighteningly) real, down to the local newsreels, the newspaper front pages, and the use of real-life pictures of Escobar and his cronies. “Narcos” is epic in scale, but it backs up each of its plot twists with receipts—the footage of M-19, hired by Escobar, occupying and then setting fire to parts of Colombia’s Palace of Justice; President Reagan, addressing the nation about military action in Guatemala. In that light, the narration begins to make more sense; there are whole bureaucratic hiccups and side skirmishes that Steve Murphy (Boyd Holbrook) explains with a few lines of narration, to get the viewer to the next step of the tangled, complicated story. “Narcos” will freeze the frame so that Murphy can explain who and where everyone is, and that’s quite useful when you’re talking about a story that spans 15 years and two continents.

It’s not perfect, but it works. “Narcos” features actors who are stars across Latin America, and as so much of its dialogue is in Spanish, it’s pitched at a much wider audience than just the domestic one. It is a history, told as much from the perspective of Escobar (who is played and inhabited brilliantly by Brazilian actor Wagner Moura, even if his Spanish isn’t that great) as it is from the scattered and flawed people trying to stop him. The recent history of Colombia is an important topic, and in this docudrama, it comes to life in a wonderful way.

Speaking of forests and trees—and, for that matter, streaming platforms learning how to make great programming by making shows about terrible people—Amazon Studios’ “Hand of God” presents a different problem. The drama is an attempt to create yet another gritty antihero drama, except instead of a struggle between good and bad for protagonist Pernell Harris (Ron Perlman), it’s a struggle between sanity and… something else. I hesitate to say “Hand of God” is about religion, because although it uses religious language, most of its Bible-spouting characters have questionable motives. But to be frank, it’s hard to say what “Hand of God” is about at all; there are some interesting trees, but no forest to speak of.

Chiefly, in the first few episodes, I found myself ignoring Perlman and zeroing in on some of the more marginal characters—Keith, played by Garret Dillahunt, and Jocelyn, played by Alona Tal. Both are recovering, when the show starts; Jocelyn was raped in front of her husband a year ago, and Keith just got out of prison. The pilot starts so in medias res that it’s difficult to understand exactly what happened for the first few hours, but essentially, Jocelyn’s husband—who is also Pernell’s son—attempted to commit suicide after what they experienced, but instead put himself into a coma. That’s when Pernell started hearing voices and having visions—experiences that he believes are either messages from his son or from God, depending on the situation. His rather random bent toward belief starts to interfere with the rest of his life, where he is a celebrated judge and public figure. He pardons Keith instead of sending him back to prison, which makes Keith his shadowy ally in his fixation on solving Jocelyn’s rape case and getting his son out of the coma.

And that is approximately two-thirds of what the show touches on in just the first four episodes; it is dense, and usually not in a good way. There’s the $25,000 that Pernell gave to a cult-like evangelical starting his own church; there’s Pernell’s beleaguered wife, Crystal (played by the wonderful Dana Delany), who looks very professional and smokes a lot of pot. There’s the mayor of San Vicente (Andre Royo), who is routinely one of the livelier characters on-screen. There’s even prestige drama’s seemingly requisite sex worker, who exists both to get Pernell off and to be shamed for her profession.

It’s a mess. At best, “Hand of God” has too much going on; at worst, it’s so muddled that it’s difficult to tell whether Perlman is playing his character as a swaggering gangster, an increasingly insane man, a born-again evangelical, or a concerned father. It’s not complexity, it’s vagueness, and more than that, it’s confusing. The show is not at all clear about what its point is, except that corruption exists, and so does belief, and dude, look at how much money Amazon gave us!

But oh, it does have some lovely trees. Tal is a revelation; her character, Jocelyn, the only character who really challenges Pernell. When Tal’s on-screen, the show makes sense and has a point of view; when she’s gone, it’s much more confused. In an excellent scene in the pilot, she spits in Pernell’s face; somehow, in her hands, it turns into her reprimand of the weakest elements of “Hand of God,” its grandstanding and ambiguity and gratuity. Dillahunt’s Keith is always on the verge of losing his carefully cultivated cool, and it’s Pernell’s handling of him that challenges any established notion of godly/ungodly that the show establishes. The direction can be quite lovely; Pernell’s visions are duly translated to screen, and attention is paid to little things that end up catching the eye, like Crystal watching a couple attempt to pack a bunk bed into their small station wagon. Above all, if you choose to watch it as Pernell using religion as an excuse for his own wrongdoing, it begins to make more and more sense; Perlman is a wonderful villain, and it ties together the corruption of the San Vicente bureaucracy with the hearts and minds of those who choose to believe his visions. There’s a verdant forest in “Hand of God,” for sure. But you have to really want to see it.