Salon talks to members of the soulful, politically charged band about their groundbreaking debut 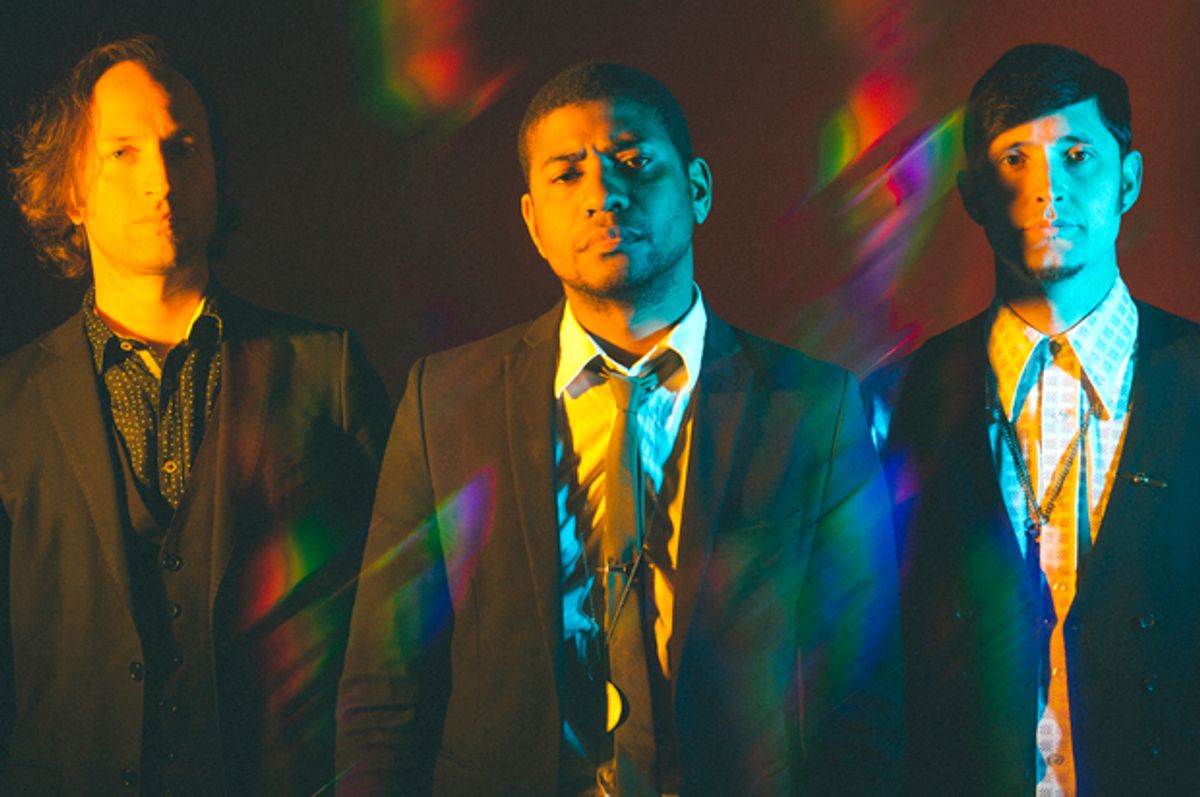 While the roots of post-punk gospel noise act Algiers are firmly planted in Atlanta, the band itself didn’t begin until its members were living on the other side of the world — and it all shows. Their self-titled debut (out now on Matador) is like a ghost of the American South, inhabiting the landscape while simultaneously existing outside of it. Salon had a chance to talk with frontman Franklin James Fisher and bassist/multi-instrumentalist Ryan Mahan about their peculiar place in the world of indie rock, being deliberate and the way their music connects with the world around it.

One thing that fascinates me about the band is the synthesis of gospel and punk — but not because the two things are antithetical, which I’m assuming a lot of people think. As someone who was raised in a rural, really charismatic, almost Pentecostal environment early in life, I’ve always felt like the essence of punk and gospel music share a very particular type of energy. It’s hard to articulate exactly what it is, though. Is that’s something you felt before you started the band, or is it something you realized after the fact? Or am I completely off base?

Franklin James Fisher: It’s something that we tapped into when we started writing music together. It was just something we tapped into and we started to curate. A lot of it has to do with our different backgrounds and different experiences. There are commonalities where those things meet. You’re absolutely right, those two things aren’t so antithetical as one may think.

Ryan Mahan: It’s interesting that you say you grew up [with that background], what with all the associations with Pentecostal churches. It’s quite a performative type of religious experience, or a performative type of institutionalized practice. Whereas I went to a church that was the complete opposite of that. It was a very stolid church, a very conservative church, a very judgmental church. The music itself was very European, puritanical music. So religious music for me was all that. I wasn’t drawn to it at all. That entire experience drove me away from religion.

But when I came to gospel music much later on in life — after I was in a few punk rock bands — I did notice some connections and a certain level of spirit. We also look at Nina Simone with numbers like “Sinner Man,” “House of the Rising Sun,” “Mississippi Goddam.” They have a real visceral, intense energy with a congregational feel. It’s not focused on one person, even though she’s obviously the most important piece in the music.

A couple years in, Franklin started to do this cover of a Nina Simone cover, “Eretz Zavat R'á'lav U'dvash,” which translates to the land of milk and honey. The way she does it is incredible. The band really joins in. There’s clapping, call and response, and all these other elements that feel quite jazzy but also really punky. Those energies are just really similar. There’s a melancholy and a bit of a resistance element to it as well.

Right, there’s almost an angst present in both. There’s also this very palpable connection between rock music and religious music from the earliest days. It’s easy to forget that the energy someone like Chuck Berry or Little Richard or Jerry Lee Lewis brought was very much rooted in those experiences growing up. That’s what is also interesting about Algiers. You have this very specific connection to the earliest rock music that most bands today don’t.

FISHER: Totally. One thing I always try to emphasize as well, in order to try and steer people away from thinking this is some sort of gimmick, is that it’s not just gospel in terms of black music that we’re referencing. I think people focus on that because of the diametric opposition you’re able to set up by putting it up against punk or leftist ideals. We draw just as much from R&B, soul, hip hop, funk. All these types of black American music. You can go back even before that to African music. It’s something that’s always been there, and we just try to make it come to the surface. We don’t try to obfuscate it.

MAHAN: I think it was interesting that you mentioned angst, Sean. There is a very certain type of melancholy that’s shared by post-punk, underground music, and certain jazz genres that points to a discontent and a permanent feeling of being out of joint. I think that’s where those things come together. Ultimately, for me, there’s a sense of universality to it. It’s not about particularity. I think that’s one of the reasons why we chose the name Algiers, to focus more on the universal, non-particular Southern elements and to look elsewhere. To look to another space, and represent something that’s outside of our local experience.

If you think about early rock and rollers, even up into the big pop boom with The Animals and The Rolling Stones, they all wanted to be gospel and soul and blues singers. Ultimately there’s a little bit of a difference for me, because our focus is like maybe the soul of the mid-to-late ’60s, which had more of a social conscience and edge. It boils down to some sort of liberation music, some sort of emancipation music. That can be a personally political thing or it can be a socially political thing. Those threads connect us to [early rock and gospel] while also pushing us forward a little in the lineage of punk and soul.

That is a very interesting way to contextualize it. And this speaks to the other thing you guys do that seems to get plenty of attention, which is delivering heavily political messages. How much of that was a response to growing up outside a place like Atlanta? Or was it simply just realizing you were socially conscious people at one point or another? You know, sometimes punk rock is kicking against something. Sometimes it’s just kicking, period. It’s not in opposition to something. It’s “this is where I’m at.”

MAHAN: There are so many different ways to interpret it. I think one element, from my personal perspective, it’s hard for me to fathom art or music that doesn’t have a social place. Of course, that’s not to invalidate any other attempts, but from the way that I view it or the way that I engage with it, is that it’s actual speaking to the social space rather than speaking to the individual. That’s what particularly engages me. When I got into music, the things that really excited me were the things that were telling me about what was going on outside of my little world. So maybe less that it was offering me assurance that other people were going what I was going through, but that there’s this other shit happening.

For us, part of the band is that [Franklin] and I have such a deep connection personally, philosophically, artistically and then politically that in some ways it’s a reflection of our relationship and the way that we spoke when we first got together. There were very intense discussions, having fun but also being very serious. Part of that is a very personal dynamic between the two of us, and then how we’ve grown and influenced each other. It’s not always a political engagement, but it’s very much at the root of a lot of what we do.

Did you have a specific idea for what the band would be? Sometimes you conceptualize something almost entirely, but other times it’s a more organic process. Even then, sometimes it’s a combination of those two things.

FISHER: I think it was a combination of those two things, because I really was feeling my way through the dark. But I think Ryan had very specific ideas about the type of band he wanted to form and the types of messages he wanted to convey. At least I think that’s true.

MAHAN: That’s fair. What I was turned onto at that point in time, it was very much political music. Maybe not agitprop protest music; it was something a little bit more nuanced and something that had an engagement with history and memory. In terms of music, I really got into some live gospel stuff and really intense stuff. That said, it wasn’t the main intention, so that wasn’t as constructed as it might appear. I think Franklin and I were writing all kinds of different songs when I was living in London and Franklin was in France. We were writing a lot of sample-based songs or songs where I was singing and there weren’t a lot of gospel elements.

We slowly started getting to this phase where it started to crystalize when we released “Blood" and "Black Eunuch” on a seven inch in 2012. It started to makes sense that it would be one of the touch points. Since we explored these other elements, there are so many paths we can take, but you have to root it in some sort of space. To root it in a tradition without being conditional about it will help us moving forward as well.

Both in listening to the music and in talking to you guys, it seems like you’re a little bit more engaged intellectually in both the music and the world around you than some of what might be considered your peers. I’m not trying to disparage anyone or generalize too much, but indie rock these days is more escapist and individualistic in nature. There are exceptions to the rule…

FISHER: It’s hard for us to comment on any other bands, because we didn’t come out of any particular scene. For years and years we didn’t think we were ever gonna be able to exist as a de facto band. So we had to flesh out a lot of our ideas through other means. I think there are a lot of bands out there that really are conscious of a lot things and are tapped into we do. We’re influenced by them a lot as well. Also, we just had a lot of living to do before this band started. We got into this much later in life than most bands do. Maybe that’s reflected as well.

MAHAN: It’s also about the type of music that we grew up listening to or has stuck with us over time. It’s been maybe a little bit more literate. There’s a few bands that we all share a real affinity for, like Gang of Four. You’re talking about a very literate band that influenced a lot. I kind of think of our music as the way I would approach studying something: as a set of footnotes and wanting to trace where that came from, then finding even more footnotes that take you in so many directions. Just like how I got into soul music through rap music, you know? That’s one of the things that inspires us and enables us to explore and think of it that way.