Jimmy Carter got it right: Race, Ronald Reagan, and how the right gutted his visionary electoral reform

When Carter was correct, he nailed it. When the right is wrong, they stay wrong -- forever 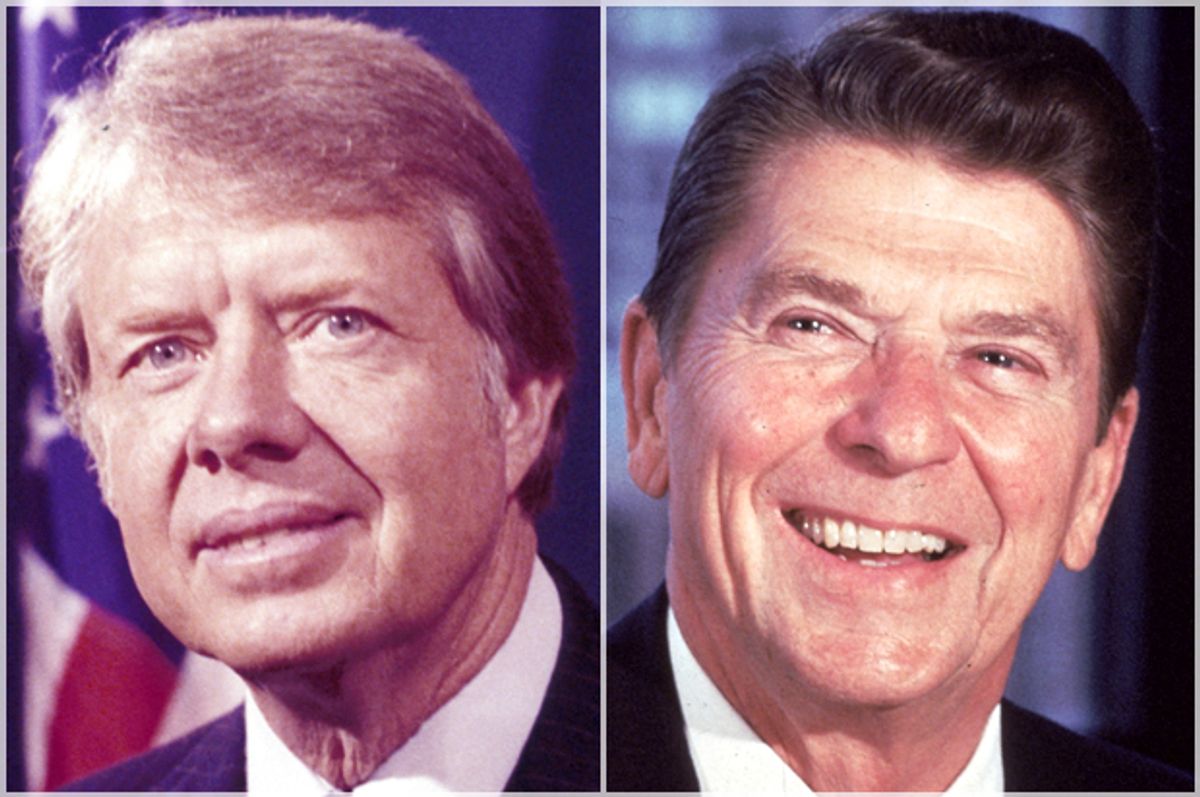 James Earl Carter is nearing the end. In an extraordinary press conference last month, the 39th president discussed his impending death from metastasizing liver cancer, with a grace, humor, and wisdom the rest of us can only hope to emulate when our own time comes.

Soon will come the eulogies: then, the assessments. Forgive me if I jump the gun with a gust of affection. I’ve been grappling with his 1976 candidacy and presidency for most of my workdays for at least a year now for my next book on Ronald Reagan’s rise to the presidency. I want to loose some thoughts while they are fresh in my mind.

Jimmy Carter had been an engineer. He had also been a Baptist missionary. Both identities, in their different ways, converged on the same habit of thought: that there was a Correct Way to do things—only one. The engineer believed that a solitary individual, working assiduously with the right tools and information, with enough ingenuity and perseverance and a clear and clever mind—all of which Jimmy Carter possessed—could arrive at the right solution to any problem. And for the devout Baptist, no less than for the engineer, a conviction, once arrived at, was something to communicate, not to compromise.

You could see how the balance informed his rhetoric in that press conference, the preacher calling us to contemplate last things, the engineer calmly and carefully guiding us through the technicalities of his cancer treatment: Carter the post-president at his most glorious. But for a president in office in the 1970s, confronted with impossible complexities, moral conundrums and the beginning of the polarized partisan politics that make governing almost impossible today, it was an unusual base of mental operations.

Frequently, Carter’s approach to those complexities produced political disasters; “The Passionless Presidency,” James Fallows’s classic 1979 essay on his time as one of Carter’s White House speechwriters, will forever remain the best account of that. But Carter’s approach to governing also could lead to a glorious kind of democratic prophetic witness. Coincidentally, I was writing about one of those moments, from the spring and summer of 1977, last week when the news of Carter’s diagnosis broke. This moment reveals Carter at his very best. It also reveals American conservatives at their venal worst—and provides one more precedent to help us understand and contend with their ongoing deformation of our democracy now.

It was March 22. President Carter, concerned that America ranked 21st in voter participation among the world’s democracies, transmitted a package of proposed electoral reforms to Congress. He had studied the problem. Now he was ready to administer a solution.

Everyone loved to talk about voter apathy, but the real problem, Carter said, was that “millions of Americans are prevented or discouraged from voting in every election by antiquated and overly restricted voter registration laws”—a fact proven, he pointed out, by record rates of participation in 1976 in Minnesota, Wisconsin, and North Dakota, where voters were allowed to register on election day. So he proposed that election-day registration be adopted universally, tempering concerns that such measures might increase opportunities for fraud by also proposing five years in prison and a $10,000 fine as penalties for electoral fraud.

He asked Congress to allot up to $25 million in aid to states to help them comply, and for the current system of federal matching funds for presidential candidates to be expanded to congressional elections. He suggested reforming a loophole in the matching-fund law that disadvantaged candidates competing with rich opponents who funded their campaigns themselves, and revising the Hatch Act to allow federal employees “not in sensitive positions,” and when not on the job, the same rights of political participation as everyone else.

Finally, and most radically, he recommended that Congress adopt a constitutional amendment to do away with the Electoral College—under which, three times in our history (four times if you count George W. Bush 23 years later), a candidate who received fewer votes than his opponent went on to become president—in favor of popular election of presidents. It was one of the broadest political reform packages ever proposed.

It was immediately embraced. Legislators from both parties stood together at a news briefing to endorse all or part of it. Two Republican senators and two Republican representatives stepped forward to cosponsor the universal registration bill; William Brock, chairman of the Republican National Committee, called it “a Republican concept.” Senate Minority Leader Howard Baker announced his support, and suggested going even further: making election day a national holiday and keeping polls open 24 hours. House Minority Leader John Rhodes, a conservative disciple of Barry Goldwater, predicted it would pass “in substantially the same form with a lot of Republican support, including my own.”

A more perfect democracy. Who could find this controversial?

You guessed it: movement conservatives, who took their lessons about Democrats and “electoral reform” from Republican allegations that had Kennedy beating Nixon via votes received from the cemeteries of Chicago.

Ronald Reagan had been on this case for years. “Look at the potential for cheating,” he thundered in 1975, when Democrats proposed allowing citizens to register by postcard. “He can be John Doe in Berkeley, and J.F. Doe in the next county, all by saying he intends to live in both places … Yes, it takes a little work to be a voter; it takes some planning to get to the polls or send an absentee ballot … That’s a small price to pay for freedom.” He took up the cudgel again shortly after Carter’s inauguration, after California adopted easier voter registration. Why not a national postcard registration program? “The answer to that is the one the American general gave to the German demand for surrender at the battle of Bastogne in World War II: Nuts.…. Government by the people won’t work if the people won’t work at it.”

He continued. “Why don’t we try reverse psychology and make it harder to vote?”

Then came Carter’s electoral reform package. There had always been a political subtext to such arguments. Now, the subtext came to the fore: “Election ‘Reform’ Package: Euthanasia for the GOP,” blared a banner atop an issue of Human Events. The current system, the conservative newspaper argued, had never disenfranchised a single person—at least “no citizen who cares enough to make the minimal effort.” So why was Carter proposing to change it? Not because he was a reformer, but because he wanted to steal elections. Carter, after all, had won Wisconsin by a tiny margin, defying electoral predictions. So why wouldn’t he want to expand the scam to all 50 states?

There also had always been a racial subtext to such arguments. Now, that subtext, too, came to the fore.

Human Events cited a Berkeley political scientist who said national turnout would go up 10 percent. They observed that it was “widely agreed that the bulk of these extra votes will go to Carter’s Democratic Party”—“with blacks and other traditionally Democratic voter groups accounting for most of the increase.” The Heritage Foundation put out a paper arguing that instant registration would allow the “eight million illegal aliens in the U.S.” to vote. In his newspaper column, Reagan said the increase in voting would come from “the bloc comprised of those who get a whole lot more from the federal government in various kinds of income distribution than they contribute to it.” And if those people prove too dumb to vote themselves a raise, “don’t be surprised if an army of election workers—much of it supplied by labor organizations which have managed to exempt themselves from election law restrictions—sweep through metropolitan areas scooping up otherwise apathetic voters and rushing them to the polls to keep the benefit dispensers in power.”

And Electoral College reform? All but ventriloquizing the argument John C. Calhoun made in the 1840s, Reagan responded: “The very basis for our freedom is that we are a federation of sovereign states. Our Constitution recognizes that certain rights belong to the states and cannot be infringed upon by the national government.”

What followed represented a hinge in the history of the Republican Party akin to one in 1966, which I wrote about in my 2008 book Nixonland. After the Republicans were decimated in 1964 and the pundits predicted they must purge the conservatives to survive, the party instead embraced a key tenet of Barry Goldwater—opposing civil rights—and ended up making an extraordinary comeback, then capturing the presidency in 1968.

In 1977, after Jimmy Carter’s victory saw pundits singing from the old 1964 hymnal—“Just why the Republican Party with its enrollment of 18 percent should be engaged in trying to saw off its left arm is beyond fathoming,” said one—via the issue of electoral reform, Republicans made a similar choice, tacking hard right for cynically political reasons, justice be damned.

On April 16, in Los Angeles, Chairman Brock assured Reagan that he now opposed the election reform package. An issue of the RNC magazine First Monday ran an article on “Fraud and Carter’s Voter Registration Scheme”; then subsequently, under Brock’s own byline, another headlined the “Democratic Power Grab.” John Rhodes, after what The Washington Post called “unremitting opposition for his original stand,” directed his House Republican Policy Committee to adopt a statement of formal opposition. When the first item on Carter’s reform agenda, extending public financing to congressional elections, came up for consideration, New Right organizer Richard Viguerie drummed up one of his patented direct-mail scare campaigns, and the measure was filibustered to death. The other items expired soon after: a more perfect democracy, sacrificed on the altar of right-wing political expedience.

This spring, when only those closest to him knew of his illness, Jimmy Carter made news on Thom Hartmann’s radio program when he returned to the question of democracy reform. In 1977, he had pledged “to work toward an electoral process which is open to the participation of all our citizens, which meets high ethical standards, and operates in an efficient and responsive manner.” In 2015, he was still at it.

He declared our electoral system a violation of “the essence of what made America a great country in its political system. Now it’s just an oligarchy, with unlimited political bribery being the essence of getting the nominations for president or to elect the president.”

The president who put the solar panels on the White House roof was once again rendered a prophet without honor.

When Jimmy Carter is right he is really, really right. When the right is wrong, they stay wrong as the day is long.

This piece was originally published by the Washington Spectator.