"Game of Thrones" meets "50 Shades"?: These female-led medieval fantasy novels should be TV's next smash hit

The "Kushiel" series couldn't have been adapted when the first book came out in 2001—but today, it feels just right 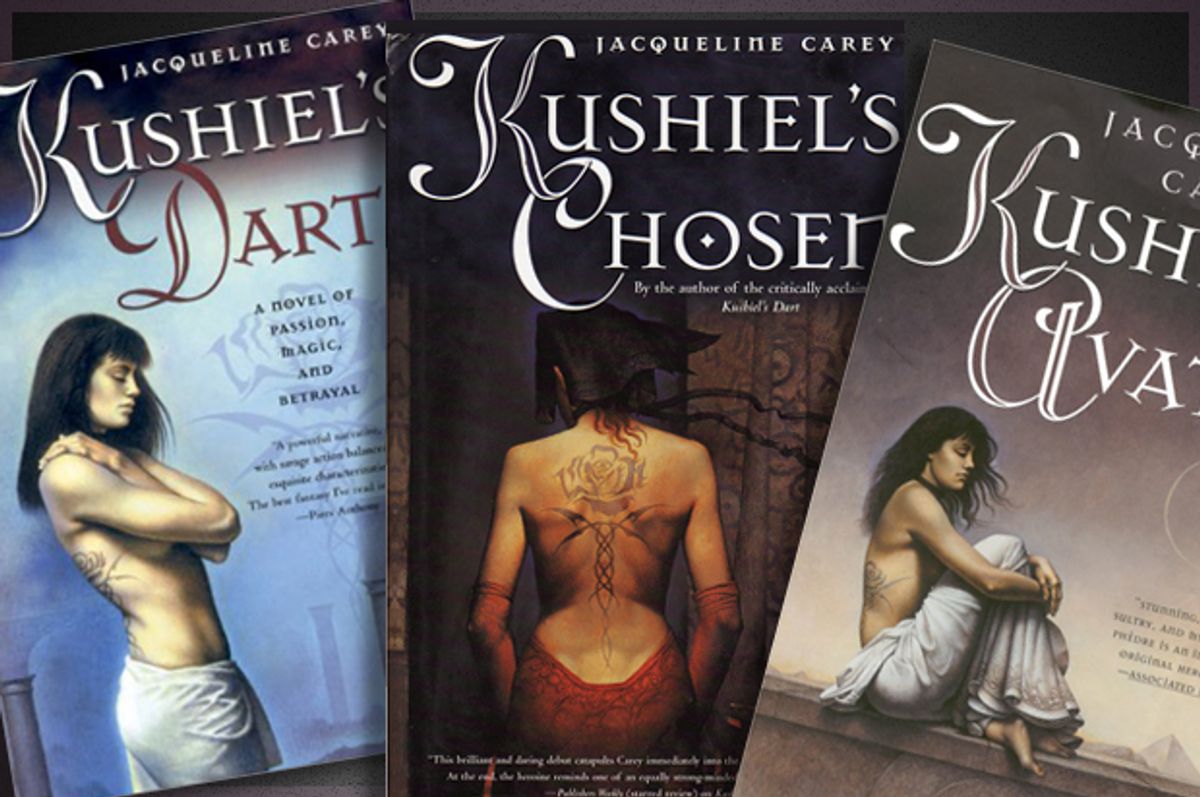 In 2001, when “Kushiel’s Dart” was published, adapting it to screen would have been unthinkable. The novel, written by Jacqueline Carey, is a rich, romantic fantasy that draws just as comfortably from theology as it does from travelogue; like so many of the best genre novels, the author has created an entirely furnished world, from the specific rituals of belief for its characters and the lore of the land, transmitted through verse, that pops up now and then in the text.

That sounds a lot like J.R.R. Tolkien’s “The Lord of the Rings,” which was adapted into a blockbuster film franchise—and indeed, “Kushiel’s Dart” has a lot in common with its legendary forebear. The protagonist of “Kushiel’s Dart,” like Frodo, starts young and is then given many tasks to fulfill, many of which are on a long and treacherous journey. In fact, the world of “Kushiel’s Dart” (and the books that followed it, because it became a series) is even easier to understand than Middle-earth. The geography is entirely like our own, and it’s just the history that is different. (The bulk of it takes place in what we would call France, but in the book they call Terre D’Ange.) And unlike Middle-earth’s many races of creatures—humans, elves, dwarves, orcs—the world of “Kushiel’s Dart” is populated just with people, albeit ones from all over the world.

So what’s the problem? Well, the protagonist of “Kushiel’s Dart” is a woman—and a sex worker, to boot. Phèdre is a Frenchified and fantastical take on a Japanese geisha more than she is the medieval European notion of prostitute, but she does have sex for money—and as she grows up, she learns how to use her sexuality to obtain information, access, security and privilege. Because she was indentured into servitude at a young age, she grows up practically an orphan; because of an “imperfection” in her eyes, she’s considered unfit for training as a courtesan. It’s only when she’s adopted by a politician with schemes of his own that she begins to appreciate her own attractiveness, sexuality and power, but partly because he wants to use her to fish for secrets that are revealed through pillow talk and idle flirtation. Usefully, Phèdre likes being flogged. That comes in pretty handy.

Because it’s so difficult to describe the premise of “Kushiel’s Dart” without ruffling even the least delicate of sensibilities, the novel has always hovered just on the edge of mainstream conversation. It was hard enough to get the literary elite to take genre fiction seriously in 2001; even now, fantasy, science-fiction, and romance fight for legitimacy, as they rake in money from interested readers. There is something deeply frustrating about this marginalization—the sexiness of the books is a hypocritical turnoff, in a world where women are so routinely reduced to their sexuality. But I think the tide may have turned enough, based on the enormous success of other franchises. Consider this my pitch: It’s time for someone to take on “Kushiel’s Dart,” magical BDSM warts and all.

It’s definitely a sexy book—a very sexy book, at times. But as pornographic tomes go, it’s incredibly intelligent, with some of the most detailed world-building I’ve ever encountered that draws, as the best fantasy does, on a surprising amount of fact. Carey’s place names, for example, are often alternative names that were discarded in the modern era; “Illyria,” for the Balkan coast, is what Shakespeare calls it in “Twelfth Night.” She takes the names of Old Testament angels for the deities she constructs; she draws on classical and medieval ritual for the games, prayers and costumes of her characters. There are no wizards or witches, but in what is probably the most historically accurate nod to the pre-modern era, the world is enchanted; the characters are by turns doubtful, superstitious and devout, and the world responds with varying degrees of power and mystery. This is very in line both with “Lord of the Rings” and its most popular critical response, “Game of Thrones”—which took the at times quite salacious material of George R.R. Martin and turned it into character drama set in a magical world. Carey’s vast array of characters vies with Martin’s for sheer breadth; and, well, her prose definitely surpasses his.

The main difference, of course, is that Carey’s story hinges on a woman’s voice. As stories featuring “strong female leads” go, Phèdre is both exemplary and herself a commentary on that idea. She’s resilient, but she’s also real; and the nature of her work makes her constantly vulnerable. What makes her successful, more often than not, is that she’s forced to confront how vulnerable she really is, and then work from there. She is a woman with desires, fears and ambitions, and Carey does not settle for a happy ending or a pat conclusion. Tolkien would be absolutely shocked to see so many speaking women on the page; Martin, for all his efforts, has been stymied both by the limits of his experience (and the very male-centric HBO adaptation) with regards to the inner lives of his female characters.

In 2001, the franchises that claimed a woman in the role of hero were extremely popular, but few in number: “Buffy: The Vampire Slayer,” in its fifth season on the WB; the “Alien” franchise, starring Sigourney Weaver, that had been intermittently producing hits; and heroine Lara Croft, from the video games, who was played by Angelina Jolie in the 2001 film. But none of those came from books.

Enter “Twilight,” in 2005, which not only paved the way for female-centric genre fiction, but also centered its entire premise around a teenage girl being afraid to lose her virginity. Where “Twilight” merely insinuated, its spinoff book went all out; enter “Fifty Shades of Grey,” in 2011, which brought the term “safeword” to the mainstream. In “Kushiel’s Dart,” Carey anticipated where contemporary conversation would be on sex work, queer identity and even BDSM; and while some of her ideals are presented as utopian fantasy (there’s a fascinating detail about birth control in this world that would be very nice, if true) most are far from universally understood or universally held. This is a world where Phèdre has to defend her occupation and fight for respect just as often as she’s able to wrangle her way into the inner sanctums of the rich and powerful. Carey’s world is saturated with politics, both of the world of Terre D’Ange and as it infringes on our own world.

Which sounds an awful lot like the most recent example: “Outlander.” Not the books, which began publishing way back in 1991, but the TV series, which has brought the incredibly sexually vivid world of Claire Fraser and her husband Jamie to life. Much like “Kushiel’s Dart,” the “Outlander” series was one that gained popularity through women’s reading groups and word-of-mouth, largely because it discussed sex from a woman’s perspective, quite frankly and openly. It’s hard to imagine such a vast, sprawling historical epic—with its own version of magic, BDSM and feminism—existing without the prior successes of “Game of Thrones,” “Twilight,” “Fifty Shades of Grey,” and more tangentially related franchises like “The Hunger Games.”

And yet: The TV show has been an unqualified hit for Starz. Another network might well want to follow their example, right? Hey Hollywood, this one goes out to you: Set the scene in Terre D’Ange; ready the whips and velvet dresses. The time has finally come for female-centric fantasy that isn’t afraid to talk about sex. And I, for one, will be watching.