Police state: When did police become servants of power?

Members of the police culture are hatched from the same political womb. And politics has diseased the womb 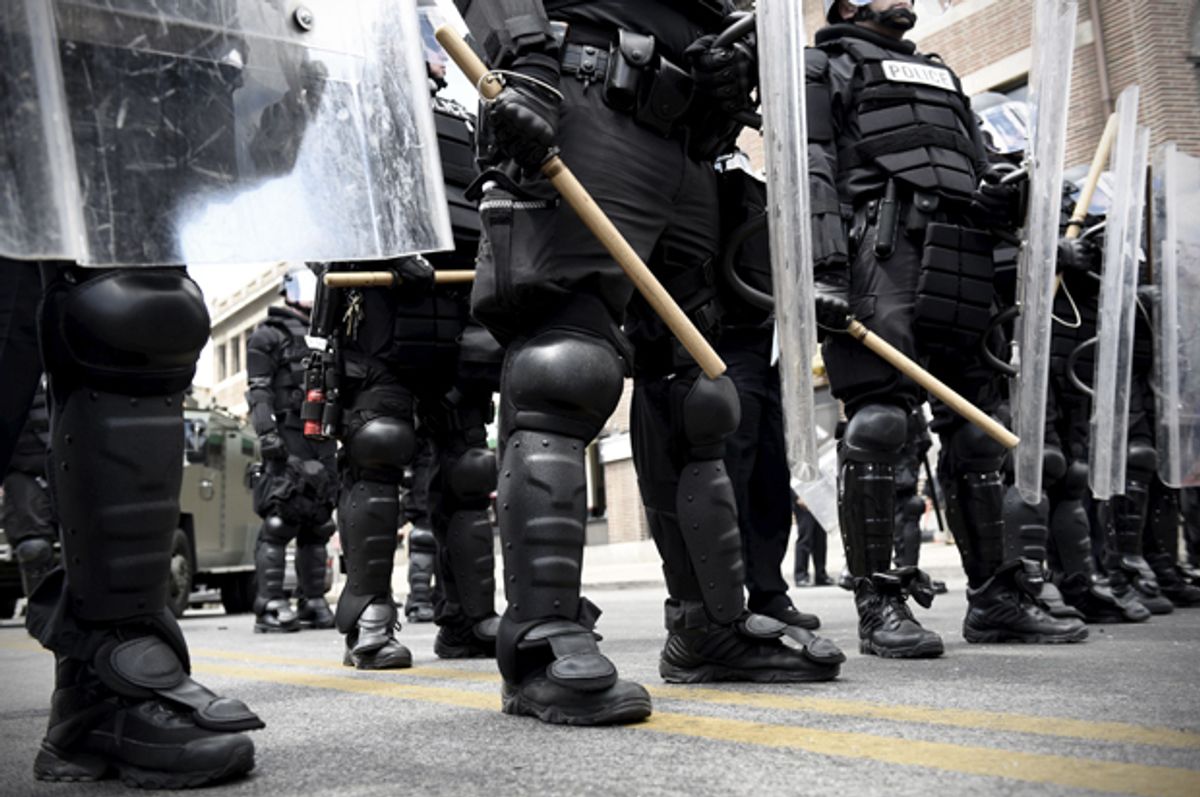 Excerpted from "Police State: How America's Cops Get Away With Murder"

Please hear me clearly: We need the police.

We need prosecutors and judges as well. And I make room for the proposition that we are well served by our fear of their power. Indeed, we have been taught to fear power from our earliest times— fear of parents, of teachers, of our bosses, fear of rejection by our peers. In short, fear plays a controlling role in the lives of all of us. And fear causes us to make lawful choices in our lives. Fear helps provide an orderly society. We want to be safe. We fear chaos and crime, and we’re willing to overlook occasional police misconduct as the price we must pay for a predictable, safe society in which to pursue our lives.

At the outset we believe most police and prosecutors are working to achieve a peaceful, crime-free community. We believe that they have our best interests at heart. Some may occasionally cross the line, but they are only human. We are all prone to err. Sometimes the police themselves are faced with circumstances in which fear takes over, and to protect themselves they may overreact. I would be doing the police as well as society a gross disservice to argue that all police are villainous crooks wearing a badge, and that the words “cop” and “killer” are synonymous. Such is not my belief. But what, then, am I saying?

The police tell us their truth: They say we, the people, have no understanding of a cop’s everyday encounters with drunks, muggers and thugs, the marginally and utterly insane, the wife beaters and drug peddlers, to mention only a few of the dirty, dangerous discards of society the police daily face. Do we question their truth? How many times have you embraced that argument when you read in the morning paper about a current spate of police brutality? And have you ever asked yourself, how have I come to accept the cop’s argument as the whole truth without questioning how I came to believe it?

But who tells the people’s truth? The large majority of law-abiding citizens know little about “what goes on out there.” What we think we know we’ve been taught by decades of fictional TV cop shows sponsored by Power—the insurance companies, the mammoth oil corporations, international banks, car manufacturers, national loan sharks, pill pushers, and the various other offspring of Power. We’ve been provided entertainment, not the whole truth, by the voice of Power—the media. We’ve come to believe Power’s propaganda in much the same way that we believe our religions— that our police and prosecutors will not prosecute and convict the innocent. Such would be un-American. But blind beliefs, cultural brainwashings, can hasten the end of a free people.

At the same time, the justice system lumbers along at the speed of a crippled worm while the prosecution chalks up conviction rates in our venerable federal courts as high as 97 percent, mostly attributable to the bargains made with guilty pleas. That statistic, on its face, boldly belies the proposition that America provides its citizens with fair trials. Until we become “the subject” of a serious, life-threatening encounter with the police, we try to just get along, to raise our kids, love our grandkids, watch our favorite TV programs in the evening, take our deserved two weeks’ vacation, and hope for a comfortable retirement and a merciful death.

Then one day one of our own, even one of us, becomes the subject. We are arrested. We are thrown in jail, and if we cannot be bonded out we will be imprisoned for months, even years, awaiting trial. We will lose our identity as a member of society. We are provided a number underneath our mug shot, and our history will be forever besmirched by a criminal charge blaring out at the world from our police record. Innocent or not, we will most likely become another number in a penitentiary or a convicted murderer on death row. Such a transforming process puts me in mind of the hawk sitting in a treetop waiting for the sparrow to fly by. At the precise moment of the hawk’s strike, the sparrow loses its identity as a fellow bird and becomes the prey. To the police, when we become “the subject,” we are no longer persons, and we’ll be de-feathered, ripped apart, and disposed of in one way or another.

Members of the police culture—the police, the prosecutors, and too often, the judges themselves, are hatched from the same political womb. And politics has diseased the womb. The poor, along with our revered middle class, do not hire or fire our police. Police, prosecutors, and sometimes judges— even those on our highest court— too often are indebted to Power and become the servants of Power. I argue that political debtors are disqualified from delivering justice. One thing soon becomes clear: The quantum of justice available to most Americans is in direct proportion to that individual’s social and economic status, which is to announce the controlling rule of law in America: Little money, little status— little justice.

The problem is simple to define. Power does not serve the people. Power serves itself. The personal needs of those who make up Power— from the police officer to the banker and corporate executive— all are in service of the self. Too many police have chosen their work in response to a personality that craves to dominate other human beings. Bankers who throw a widow out on the streets in winter are bullies diseased by a love of money. The corporate executives who will cut their employees to starvation wages in their psychotic quest for profit are bullies. Or the same executives will, at the expense of the health and lives of customers, ignore standard safety practices hoping to acquire yet more profit.

Power has one purpose: to satisfy itself. In doing so Power kills, wrongfully persecutes, and criminally imposes itself on the innocent. Yet the work of Power can be justified, even blessed, when it is exercised by a fully informed, intelligent people in pursuit of their rights as a free people. But the cry “Power to the people” is no longer heard. In its stead we too often hear the muffled, wretched response of the new American slave— “I got nothing to hide.”

Finally staid old Harvard stuck its toe into the water to admit the obvious. In his scholarly work In Doubt, Harvard professor Dan Simon writes:

The truth-seeking objective is most likely to be overridden in high-profile cases, where the pressures to solve the crimes are the strongest. In some instances, the adversarial pull results in deliberate police malfeasance, and even entails lying outright in court, a practice known as testilying.

What the good professor might have added is this: Over the years these killings and wrongful prosecutions have taken place in nearly every city and hamlet across the country, mostly outside the glare of the media that too often sits blandly by blinking its sightless eyes unless called upon by Power to speak. Who cares about what happened to Mr. Nobody? “He must have had it coming,” we say. “And, if not, it was he, not I. What do you expect me to do about it? I’m just an ordinary citizen. I have no power to take on the system. Besides, we need tough cops to protect us against the hordes of criminals who are roaming freely out there and daily threaten our lives and safety.”

The police, prosecutors, and defense attorneys all want to win. Winning is the operative word. But winning is not geared to preserving the rights of the accused nor delivering justice. Winning has little to do with discovering the truth. We hear it like a worn-out mantra: He or she won a conviction, or she or he won an acquittal. Winning. But at what cost to justice? Winning and injustice are often unfriendly occupants in the same bed.

What happens when the police, in the name of winning and by whatever means, frame the innocent for murder? These helpless, often nameless wretches are themselves eventually murdered by the state after they’ve been tortured for years awaiting their fate on death row. We strap them to a gurney and insert the needles and usually no one cares. We may be advised of the state’s killing with little more than a half-minute report on the evening news, after which we switch to the next cop show.

In the meantime the police officer’s moral justification for his own criminal conduct that led to the conviction of the innocent citizen varies little from case to case. I’ve heard police argue, “Well, if he wasn’t guilty of this crime he was guilty of one we never caught him at.” I’ve heard others say, “Whatever we did was peanuts compared to what he did or would have done had he still been running loose on the streets. It’s war out there. And we’re going to win the war.” Still others contend, “The laws we have to deal with tie our hands and let the guilty escape.” I’ve heard others complain, “We do what we have to do to get those scumbags off the street. Read them their rights? Get them a mouthpiece? Right! The law forces us to use other means.” And many of our citizens applaud such rationalizations, and quietly murmur, “It may happen to them out there, but it won’t happen to me.” And as a chorus to such universal rationalizations we hear the same dangerous words, “I don’t worry about the cops. I have nothing to hide.” If one has been spawned in a fishbowl, how does one know the dangers of  the river?

After the widely published accounts of the people’s protests over the deaths of black citizens at the hands of the police—the choking death of the unarmed Eric Garner, the shooting death of the unarmed Michael Brown in Ferguson, Missouri, and the shooting death of the twelve-year-old Tamir Rice on a Cleveland playground as he held a toy gun—Americans seemed to have at last awakened. New York City mayor Bill de Blasio was seen by the police as having joined the people’s protest, and at the funeral of one of their officers thousands of police in full dress uniform stood and in unison turned their backs against the mayor, their boss, in a shocking display of power and insubordination. When the police can, in open rebellion, display such power without fear of reprisal, is this not the conduct of the police in a police state?

Excerpted from "Police State: How America's Cops Get Away With Murder" by Gerry Spence. Copyright 2015 by G.L. Spence and Lanelle P Spence Living Trust. Reprinted with permission from St. Martin’s Press.