A woman with ambition: Dating down as my career went up

Once you hit a certain professional level, the number of men who feel comfortably equal shrinks 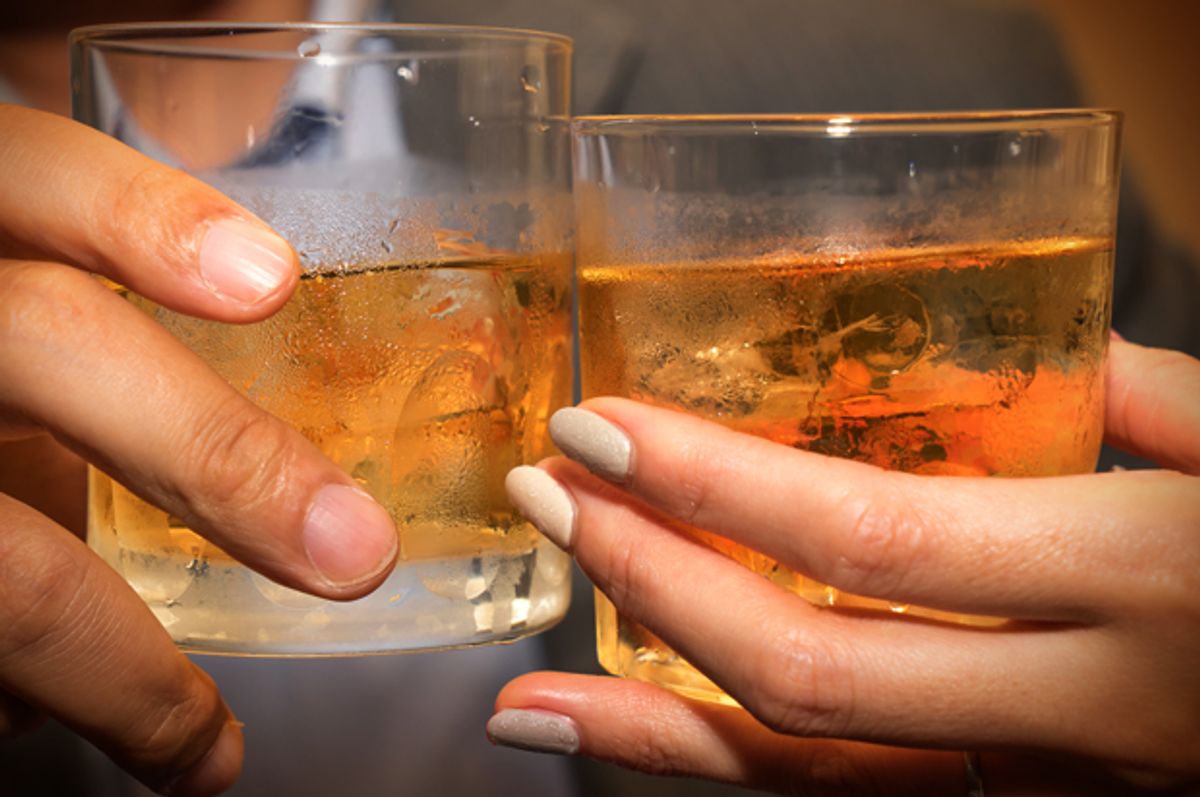 I grew up in a town known for hunting, fishing, bars, strip joints—even a house of ill repute, until it burned to the ground when, according to town gossip, a prostitute tried to make a grilled sandwich on a steam iron. It was like the setting for “The Postman Always Rings Twice,” only not suspenseful. I had ennui, though I was still unfamiliar with the word "ennui." I was supposed to marry a telephone man. But I left town and, due to a series of bad relationships and improbably good grades, I stayed in school and earned a Ph.D.

My formative years spanned three eras. My mother was a Midwestern housewife, and I learned her values. Then I was an adolescent who read Gloria Steinem and saw the feminists on TV. By the time I was a graduate student, the idea that woman was man’s equal was regarded with hostility by the general population but as a mandate for change in universities. So I was part of that shift of women trickling into what had been, until then, a mostly male profession. I met few single women, fewer single men.

I didn’t get it that a few years of feminism wouldn’t undo centuries of convention about mating and dating, including the idea that men can date or marry women with less status, but when a woman does it’s a scandal, a secret. Some women navigated this impasse better than I did. I was naïve. Or fearless. Or fearless because I was naïve.

By the time I was 35, I was a professor who’d published two books but still hadn’t dated anyone who wasn’t a guy in a local band (he liked Alka-Seltzer with corn flakes for breakfast, hangover remedy); a small-time drug dealer (more than one of these, in fact); or a carpenter ready to knock off early if I’d just turned in a big project.

For years I lived with a rift between my days and nights, between my work self and what I thought was my real self. I’d mention work, and my then-boyfriend would flash a silent, terrified smile. If someone at work asked me about my weekend, I smiled silently too.

I lived miles outside the town where I taught. Buying a house in the woods and dating men who lived in the woods was no doubt a way of alleviating impostor syndrome, chronic worries I’d forget which Shakespeare play I’d just quoted, or that I’d be forced to say a word or phrase I’d read but never heard: "fin de siècle" or "deus ex machina" or "ribald."

Then I met a man at a conference who’d studied Latin at top-tier schools. Latin is rife with ideas and philosophies. I’d gone to state schools on scholarship. My second language was Old English, virtually foreign now, rife with bodies, weapons, food, exile.

This man swooned for me. I swooned back.

He liked that I was wisecracking and “sexually unapologetic.” He went home and told his girlfriend he loved me, then called daily. When his department chair told him to stop running up the phone bill, and his girlfriend told him to move out, he got sick. He had a disease exacerbated by stress he’d never mentioned during two weeks of real-life sweet nothings and two months of love letters and phone conversation. He broke up with me as he’d loved me, long-distance. If I’d seen him incompletely, he’d objectified me too, socio-economically: He saw my womanhood as so earthy it literally seized up his heart.

One day a student working on her master’s degree, and an incorrigible matchmaker besides, suggested I should go on a blind date with her former professor in a nearby city. I drove 60 miles, pre-cellphone, pre-GPS. I arrived so dazed I could barely speak. My date was vegan, but he’d picked out a restaurant that wasn’t—out of courtesy, hospitality, or there weren’t vegan restaurants back then.

He spent 30 minutes asking the waiter about each entrée. The restaurant was packed. I felt for the waiter, who was good-looking. My date ordered pasta, no sauce; I was too hungry to tell him that pasta contains eggs. He asked about the wine list, too, then ordered a single glass. I still considered strong drink the best reason to leave home at night. I ordered whiskey on the rocks and a steak cooked rare, bloody. I like steak. I don’t especially like whiskey. I was sending a message—we were outside our comfort zones.

We discussed hobbies. His: serving on arts boards. Mine: cooking, sewing, canning. We went back to his house where, in the fireplace, he lit wadded-up newspapers under clippings from hedges he’d trimmed that day. Smoke filled the house. I doused the fire and opened windows. I heated my house with a woodstove, so I explained that fresh-cut wood is green and must season. He found this interesting, or alluring, because he asked me to spend the night. I couldn’t. I’d arranged for a cord of wood to be delivered the next day.

I went home to a fling with another carpenter. Christmas was coming, lonely for anyone, I felt, and I’d need temporary seasonal help. But I inadvertently dated him for six years.

Once, during pillow talk, he told me UFOs existed, but the moon landing was a hoax. Depending on which poll you consult, Gallup or Fox News, 6 to 20 percent of Americans think the moon landing was a hoax. But he was the first I’d met. I sputtered my incomprehension, pacing while wrapped in a bed sheet: “Little green men mastered interplanetary travel, but we can’t get to a moon and convinced journalists to pretend?”

Disagreeing about space travel should probably be a deal-breaker.

But we didn’t talk about space travel, I reasoned. We didn’t talk about ideas. We talked about food, sleep, weather, what linguists call phatic talk, talk that’s mood-calibration, not information. We broke up for good when I adopted my baby. My attention went to her. I was too busy to ponder who I’d been and might become and therefore whom to date.

I’d dated as a relief from social class unease. Other women have their reasons. A friend raised blue-collar in Bakersfield, California—she was just shortlisted for a prestigious fellowship in her research area—said: “I want to be with a person who knows what it takes to get from there to here. I couldn’t feel loved by someone who doesn’t know that.”

Consider just one century, the 20th.  Doctors married nurses, executives married secretaries, pilots married stewardesses. Female doctors, executives and pilots aren’t rare now. But they’re not often married to men whose careers have less stature. My friend was in medical school when her longtime fiancé called off the wedding. He’d realized, he said, he didn’t want to be in a marriage in which both spouses had demanding careers.

He didn’t offer to give his up. He suggested she could.

So it’s hard for a woman with ambition to meet someone with whom to share more than sex and the talk that’s all mood-calibration. Once you hit a certain professional level, the number of men who feel comfortably equal shrinks, first subtraction. Some men don’t want an equal, next subtraction. If you’ve got a past you won’t hide—an extended family more like the cast of “Duck Dynasty” than John Cheever’s characters—next subtraction.

And you have to like this man and feel sexual heat.

I got lucky. My conflict resolved the way it does in old-fashioned novels, with a bit of deus ex machina: an unexpected plot twist that solves an otherwise unsolvable problem. An acquaintance convinced her friend, a man, and me, a woman, that we should meet. She gave us each other’s contact information so we could fail or succeed in private.

He was raised by an oil field worker and a housewife, though his “house” was boarding houses, and they’d lived as transiently as Okies. He’s an attorney now. He’s instinctively fair, impartial and enough older than me that he was a young man and not an adolescent when feminists demanded equal work, equal pay and equal domestic responsibilities. He never reconsidered the rightness of any of this, not even during the 1980s-era backlash when I did. Or at least I wondered if I’d paid too steep a price.

One night I dreamed I was dating two guys. One drove a pickup and listened to Steve Earle. The other ate at the best restaurants in the city and read Orhan Pamuk. Both asked me to break up with the other one, to choose, and I got mad, saying: OK, but neither of you will make me happy alone. Then I woke, and no breaking up or apart was necessary.

The day after our wedding, we’d arranged for my daughter and his son to sleep at friends’ so we could start to unpack boxes in our new house. I’d driven over with a few hard-to-pack items. As I approached the door, a lamp in one hand, a satchel in the other, I asked to be carried over this threshold. He swept me off my feet, complicated baggage and all.

Debra Monroe is the author of six books, including the memoir, "My Unsentimental Education," which, in the words of Rosellen Brown, “raises a dozen potent question about what has changed for a generation of women not so much disillusioned but unillusioned about what it means to ‘live like a man.’” Her essays have been published in the New York Times, The American Scholar, Guernica,The Morning News, and more.