Fall TV Preview: Mondays bring the return of Minnesota gothic, the debut of "Supergirl" and a singing, dancing, musical comedy

Here’s what to watch this season, including a "female Jason Bourne" and a Dianne Wiest family sitcom 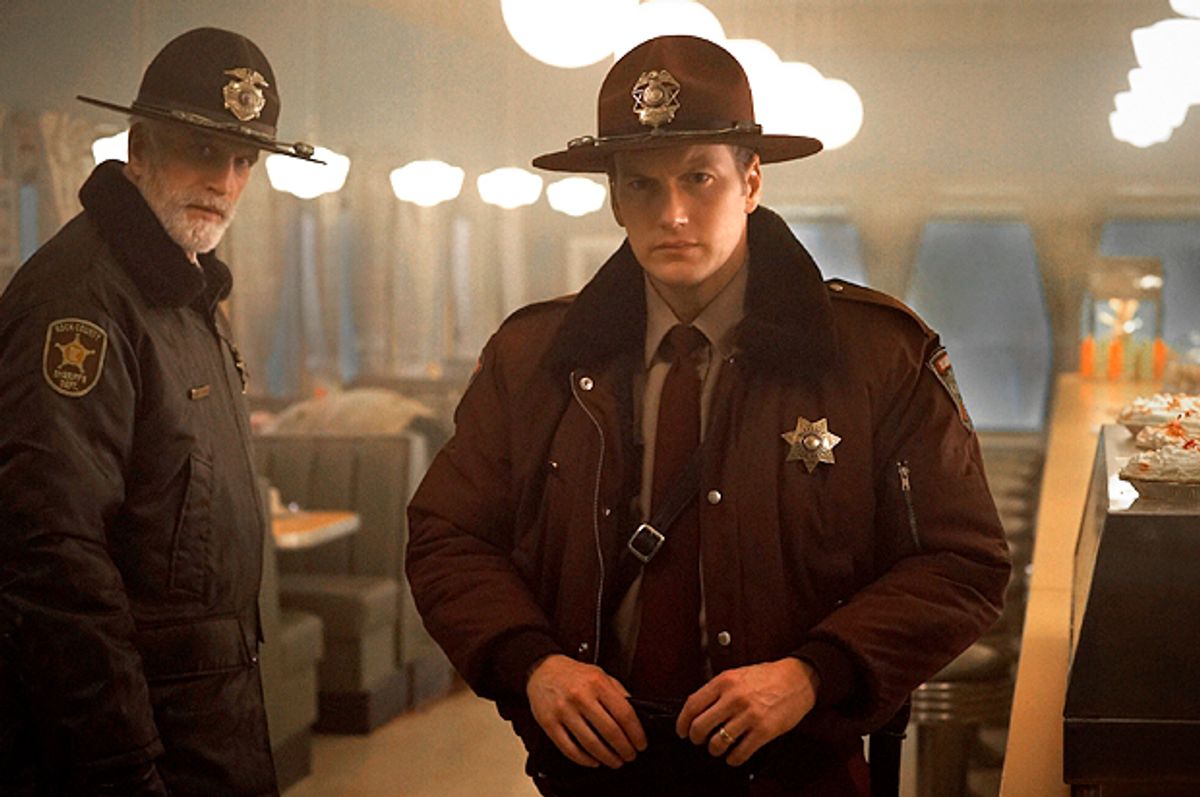 Mondays are a little lighter than the rest of the week — everything here is competing with audiences catching up on Sunday night TV and those tuning into Monday Night Football. But there’s still plenty to look at. NBC is trying to make the night their home for thriller-dramas, with “Blindspot” and “The Blacklist,” while CBS is going for a younger demographic with the sitcom “Life In Pieces” and the family-friendly “Supergirl” on the same night as their perennial hit “The Big Bang Theory.” After the kids go to bed, “Fargo,” at 10 p.m., promises to be gripping.

“Blindspot,” 9 p.m. on NBC. Debuts September 21.
If you’re already inclined to enjoy gritty procedurals set in New York City, “Blindspot” has a premise that is quite a hook — a woman is found in a duffel bag in Times Square, with no memory and covered in tattoos — including a man’s name tattooed on her back. That man is an FBI agent, and what follows is the attempt to figure out who she is and why this has happened to her. The show has used the phrase “female Jason Bourne” in its marketing — she immediately begins to exhibit a marked proficiency for, like, spy stuff. Killing people, reading lots of languages, assembling guns. The Jane Doe is played by Jainie Alexander, who became famous for her role as Lady Sif in the Thor films. There’s a lot happening that could be good, or at the very least, interesting; it has genre appeal, spy-thriller appeal and a very cool lead. But there are many potential pitfalls. Sullivan Stapleton, as the FBI agent Kurt Weller, falls a little flat; the plot moves so fast, even in just the previews, that it’s hard to tell what it will be in even just four episodes and NBC has such a bad track record with scripted drama right now that it’s passed tragic and become sort of hilarious. One worth keeping an eye on if you liked “The Blacklist” or “Alias.”

“Life In Pieces,” 8:30 p.m on CBS. Debuts September 21.
This show is pretty openly trying to be “Modern Family” and has hauled in an impressive cast to try it. “Life In Pieces” stars Dianne Wiest and James Brolin, as well as up-and-coming household names like Betsy Brandt (Marie on “Breaking Bad”), Colin Hanks (Tom’s son, and also recently of “Fargo”) and Thomas Sadoski (Don on “The Newsroom”). The problem is, nothing I’ve seen yet is actually funny. Unlike “Modern Family,” which relies on the mockumentary format to get laughs, “Life In Pieces” has a less clear strategy. Still, we’ve all got families that are weird and frustrating in their own ways; another comedy on that front isn’t a bad thing.

“Fargo,” 10 p.m. on FX. Returns October 12.
Season one of this show won awards for its desolate, snow-swept portrayal of good and evil struggling in a small town in Minnesota. Billy Bob Thornton and Martin Freeman anchored that season (loosely within the world of the 1996 Coen brothers' film of the same name), but the show was stolen by newcomer Allison Tolman, playing town police officer Molly Solvorson. As the anthology format demands, season two starts from scratch. This next installment goes back to 1979, to Molly’s parents and the drily hilarious occurrences that her father begins to investigate. The season two cast is incredible: Kirsten Dunst, Patrick Wilson, Jean Smart, Jesse Plemons, Kieran Culkin, and Ted Danson, you guys. I’ve had my reservations about this show, but season two’s creative direction indicates that the series has a creative life of its own beyond just the world of the Coen brothers’ legendary film. Season two of “True Detective” was a flop; season two of “Fargo” might well be better than the first.

“Crazy Ex-Girlfriend,” 8 p.m. on The CW. Debuts October 12.
So, this is a musical comedy about a woman who moves across the country to be somewhat near the guy she dated in adolescence. That description has already caused most of the mainstream American audience to tap out, but if you’re still interested, this show has the potential to be really great. The “crazy” of the title might really be an indicator of mental illness — Rebecca (Rachel Bloom) is a very successful corporate lawyer, but a chance encounter with an ex is enough to convince her to move across the country to where he lives. That is sunny West Covina, California, where she is extremely overqualified at the local law firm and is hired anyway. In the meantime, Rebecca sings — about West Covina, her ex and the relative accuracy of Facebook stalking. Dark, funny and very much a worldview comedy, with shades of “Suburgatory”’s cynicism and “Jane The Virgin”’s magical realism.

“Supergirl,” 8:30 p.m. on CBS. Debuts October 26.
Even if previous comic book shows haven’t appealed to you, “Supergirl” might. It’s by the same creative team behind the enormously popular “Arrow” and “The Flash,” but instead of making its home with those two shows on the CW, it’s hoping to net an audience at the far bigger CBS. The story is exactly what it sounds like — Kara-El, sister of Kal-El, has the same abilities as her older brother does. The difference is that CBS is putting a teenage girl at the head of her own superhero franchise — with a name and logo that is a lot more recognizable than either Green Arrow or the Flash. “Supergirl” will be the first female superhero at the head of her own show since “Wonder Woman” 40 years ago. The upshot is that even if “Supergirl” isn’t amazing, it’ll still have done something amazing. Plus: Expect crossovers with Greg Berlanti’s other shows, because the CW and CBS are in the same corporate family. (Sorry, “Gotham.”)