Joan Didion vs. mythic America: The evolution of a literary legend 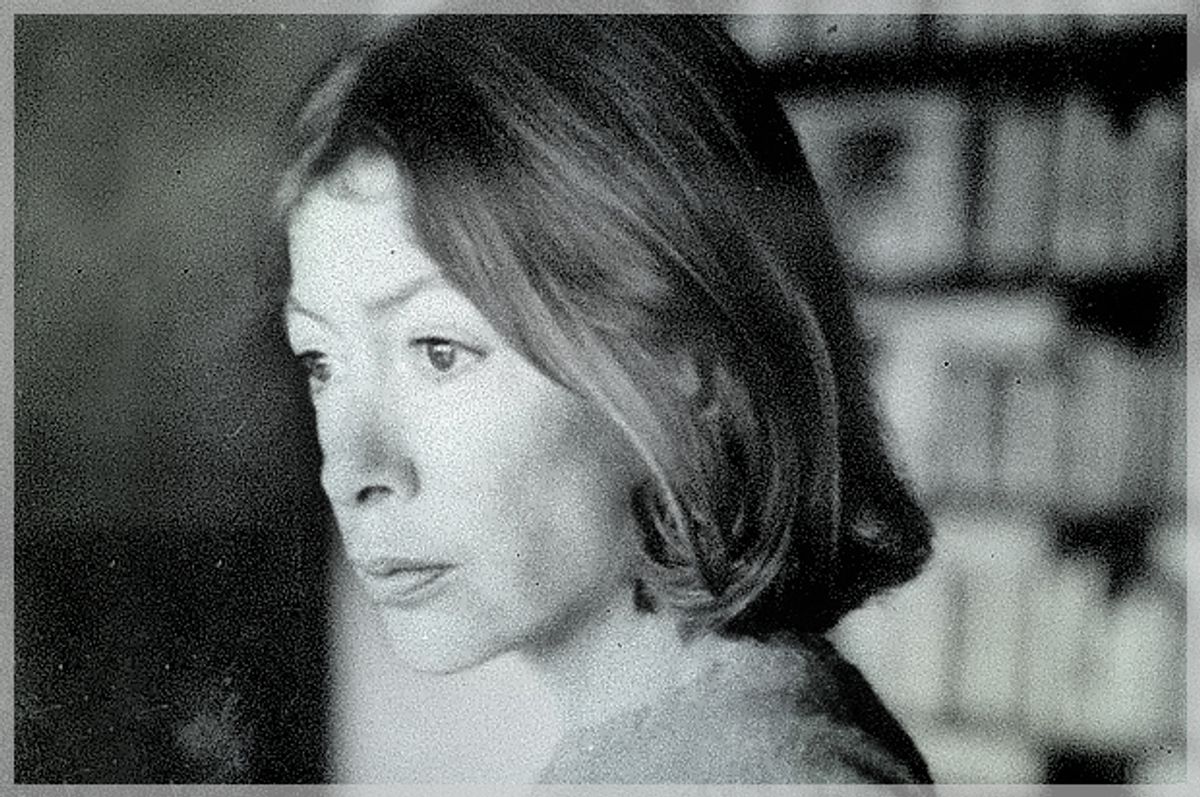 “We tell ourselves stories in order to live.”

These were the words Joan Didion famously wrote in her seminal 1968 essay, "The White Album."

But as the emerging counterculture of the late 1960s gave way to the hedonism of the 1970s — where rising crime rates, violence and the darker side of drug culture began to rear its ugly ahead in American public and private life — Didion pretty quickly began to doubt all the stories she had ever told herself.

If Didion began her career as a journalist who, rather naively, placed her trust in the power of American mythologies — namely, American exceptionalism with the west as the final frontier. By the late 1970s and early 1980s, she began to distrust those fairy-tale fables entirely, searching instead for meaning that was hidden underneath complicated political power games, which increasingly began to resemble a television soap opera rather than an egalitarian democratic process.

As Didion began to write about politics from outside U.S. borders, she started to understand that much of the public rhetoric from American politicians was camouflaged in the cosy language of symbolism, where the cold-hearted reality of murder, bombing and ongoing war — conducted in the name of so-called American freedom — was the very thing that made affluence and prosperity within the United States' own borders possible.

In her essays especially, Didion works out of a classic European tradition that is highly influenced by Montaigne and others. In this discursive and personal literary style she is able to admit her limitations to readers: attempting to figure out how the society she is living in is constantly evolving. For Didion, honesty, truth, language and authenticity are just as important in making a journalistic piece work successfully as winning an argument is.

In "The Last Love Song," author Tracy Daugherty gives us a meticulously researched biography of Didion that functions as both an exploration of late 20th century America cultural values, as well as an incredible insight into the life of an extremely talented woman of letters.

Despite attempting to get Didion's cooperation and approval for the book, Daugherty had to approach his subject in complete isolation. I caught up with the biographer to discuss the paradoxes of Didion's writing, why she feels so at home in the essay genre and why her journalism is far more compelling than her prose fiction.

Did Joan Didion believe that language gave her a certain amount of power in life?

Yes. Didion once said the only time in her life when she feels in control is sitting at the typewriter, because then she can control the story. And her language is so tight, powerful and direct that you can see on the page how hard she works to maintain that control. For Didion, whatever happens in life, you can always form it into a narrative which you can control.

Something seemed to change in Joan Didion as a writer during the 1980s: what was it?

She became more politically aware. Earlier on in her career she had been asserting the loss of narrative. By the 1980s, however, Didion believed the collective mythology that many Americans had bought into was a bit of a distraction. And that it doesn't tell us what is really going on beneath the surface, which is people in political power involved in covert activities.

Didion began to find in her writing a more accurate way to describe the political culture.

Can you talk about the paradoxes in Didion's writing? You suggest her real interest is language: its inaccuracies, illusions and the way words imply their opposites? In this sense, was she influenced by the work of Orwell ?

Very much so. That is what is at the heart of Didion's writing; it's always about language.

She believes we have to use language that is accurate and true. Otherwise our politics will bamboozle us and get us in deep deep trouble.

Would you agree that the honest nature of Didion's writing — where she seems to admit her limitations as a writer — is why readers feel so at home with her work?

I think so. It's disarming and even charming when she begins by admitting her own confusion, saying, "I don't know what this is about." And we get to see the movement of her mind on the page.

This is another attractive quality to her work. She doesn't begin with a fixed answer and say, "Here is my thesis and I will prove it." It's more her saying, "I don't know what is going on here so let me talk about it for a while and figure it out together." That really draws readers in.

Also, I don't see her as a confessional writer. She is certainly confessing on the surface: to her confusion, neurosis and faults. But she withholds as much as she reveals. She is a candid writer, but definitely not a confessional one.

Is this the tradition of the essay, where a writer is allowed to kind of wander off and just think about things, rather than try to provide answers?

Yes, I see Didion in the same tradition as, say, Montaigne, in that essays tends to meander and go off on tangents rather than hammer home a specific argument. Which is not to say that she doesn't have judgments and ideas that she wants to get across. But she is more interested in exploring the side path. And that draws readers in: allowing us to participate in her thinking process rather than be lectured.

Didion claims that her politics have never changed. Would you agree with this?

It certainly appears at first glance as though she began as a conservative and ended up as a liberal. She claims that actually, she hadn't changed, but the world changed. In the 1980s what really galvanised her [to move towards a more liberal persuasion] was the rise of Ronald Reagan in California. She had interviewed Nancy Reagan, and knew the Reagans. She thought they were not real conservatives: that they were false and manipulated their image. And that's why she became politically concious. She was watching the image-making: how politicians manufacture an image of themselves that's not true to life.

But Didion was part of that world herself. Was there a sense of personal guilt from her side?

I think so. Her critics charge her with living in a world of privilege, and it's certainly true. That is part of who she is. So she really does know the world she is writing about. For Didion, it's not so much that she dislikes privilege, it's that she wants people to be honest and authentic. She bristles at people who try to manufacture a false image.

You write in the book that blind romanticism and political realism are two extremes in Didion's life. Was it a juxtaposition between these two things that made her work so great?

It really goes back to this notion of myth-making. And as a young child she really bought into a lot of the American myths. Then during the 1980s, when she began covering the political campaigns for the New York Review of Books, she saw through a lot of the myths, into the realities of how power worked. So she made the shift from being a blind romantic to being a very pragmatic political thinker.

Can you talk about Didion's relationship with the New York Review of Books, and how it sparked perhaps the most productive phase of her career? What did Robert Silvers, her editor there, intuitively grasp in her as a great writer and social commentator?

He saw that Didion was not ideological in her writing. And also that she was willing to take an argument and consider it from different points of view. That appealed to him, as did Didion's desire for authenticity. And whatever a person's political persuasion was, Didion would always try and hold that person to a principled truth. She would puncture any mythologies that they would try to create. Robert Silvers was probably her most astute editor. And Didion credits him for her political education. Didion always looks for the contradictions and wants to get beneath the spin and beneath the surface. So she says, you look at the official record, and then you start to take it apart. That's where the story is for her.

Yes. This goes back to her university eduction, which meant reading a book very closely and analyzing it, sentence by sentence. That was the way she learned to read literature. And then she turned around and said: that is the way I read everything. She read journalism, fashion, people's facial expression, even all of life that way.

Everything for Didion becomes a text, and she analyses it. That's her way of approaching most stories.

During the 1980s when Didion travelled and reported from outside of America, did her political outlook shift, particularly spending time in Latin America?

Well, her fiction during this period is a good way of getting into her non-fiction, because she starts setting her fiction in hotels. But yeah, she did begin to look at America from a different angle.

She begins to think, once you get outside of these borders, you start to look back at it. Those hotel settings are fascinating because they are very public places, but where intimate activities take place too. This is really the intersection where Didion's work becomes interesting: where a private life interacts with a public life. And she has become that figure. She is very public but also very private. So those hotels are perfect settings because the public and private overlap.

You seem to imply in this biography that Didion has a kind of distance from grief, after both the death of her husband and her daughter. Why do you think this might be?

Shock was certainly part of what she was experiencing. But it may also go back to this idea that Didion is a candid writer but not a confessional one. She has a reputation of being a confessional writer, but really, she is not. She confesses only what she needs to in order to set up an intellectual argument. In this way, she tends to approach the world intellectually rather than emotionally.

Her first response is to analyze, and not to wallow in the feeling of it. So when she feels grief or shock, she is partially protecting herself by putting on this aloof persona. Her natural inclination is not to say, "What am I feeling?" but instead to say, "What does this mean?" I think she wants to analyze things rather than experience them.

If we are to rate Didion the novelist vs Didion the social commentator/journalist, what kind of comparisons do you think we can make?

Well, her journalism is her real strength. The fiction is just not as strong as the journalism.

This may be because Didion doesn't really delve into the emotional lives of her characters so much, so her novels are very much intellectual constructs. And that is appealing to certain readers.

But many other readers want to read a novel so that they can think emotionally into another world. And Didion doesn't offer that. Her best fiction is a rare thing in American literature, in that it is overtly political — particularly her novels of the 1980s.