A fat-shaming video by a YouTube comedian went viral, sparked outcry and was taken down over the weekend 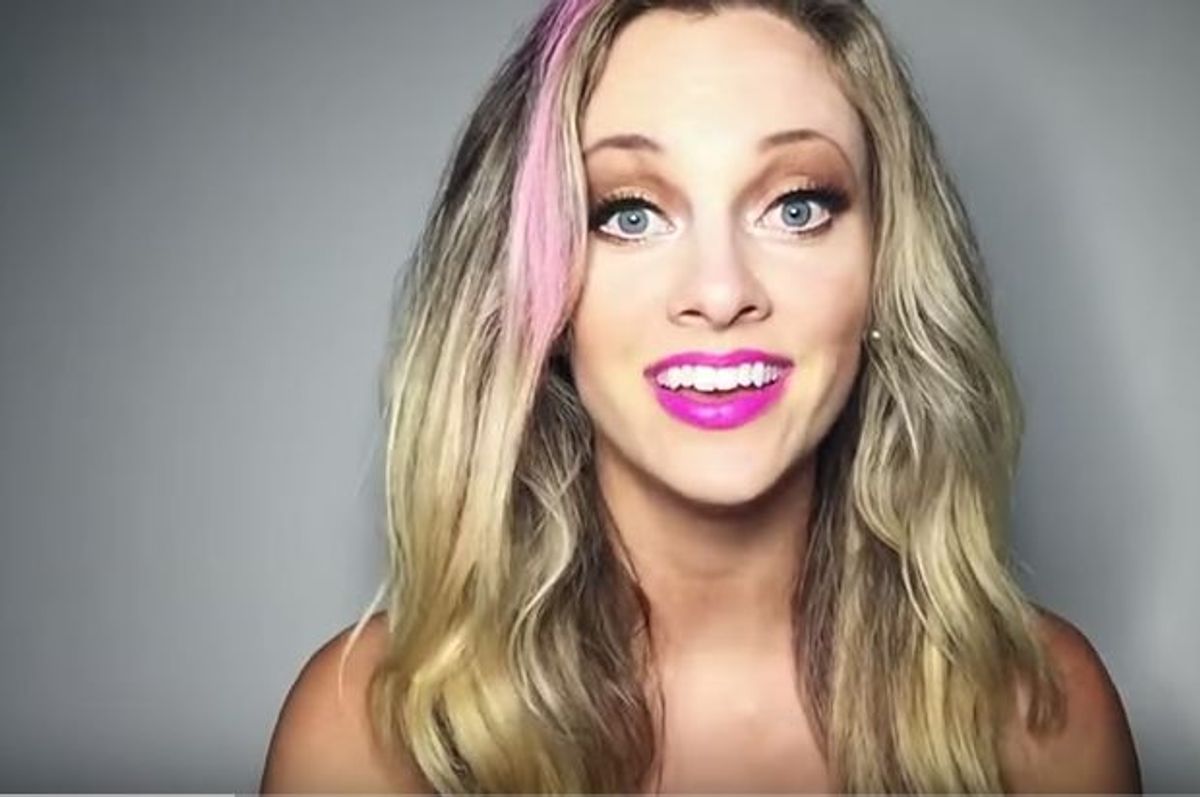 On Saturday, Canadian vlogger and self-described comedian Nicole Arbour was helped in her crusade to shame fat people, when her viral YouTube video “Dear Fat People” was removed from the Google-owned service, along with all her other videos, over the weekend (her channel is now back online, and has racked up over 550,000 views). The monologue finds Arbour ranting at the camera about how terrible fat people are, saying fat shaming isn’t real (even as she’s in the process of doing it) and that the solution to pretty much every fat person’s life is to lose weight, which is, of course, completely within their control. The gist of the video, in much more succinct form is: Dear fat people, you disgust me and should not exist.

I say “helped,” because by having the video removed, even for a short time period, Arbour can now set herself up as a martyr to political correctness and “censorship,” which she’s already started doing on Twitter. But the real issue here is why, in 2015, people like Arbour still find it acceptable to proudly post proclaim their visceral disdain for—and, I’d argue, hatred of—an entire group of people. To be fair, Arbour herself doesn’t use the word “hate.” Instead, she uses an extremely common and lazy workaround: “health.” She claims, “I’m not saying all this to be an asshole; I’m saying this because your friends should be saying it to you.” She is quick to clarify that she’s not talking about people who are fat because of “a specific health condition,” but she is referring to “the 35 percent of North Americans who are obese. That means you are so fat you are affecting your own health.”

She goes on to say “big boned isn’t a thing”—and neither is “fat shaming” (according to Arbour in her video, “Fat shaming is not a thing; fat people made that up. That’s the race card, with no race”). She says that people discriminated against because of race or sexual orientation should fight back against their oppression, but not fat people—because, yes, they’ve made it all up. But if you listen to Arbour’s words and tone, it’s clear that she not only doesn’t know the first thing about fat people’s health—and likely doesn’t know any actual fat people—but that she also is first and foremost concerned with her own comfort level, not other people’s.

“So long as people believe that ‘concern trolling’—harassing and threatening people under the guise of being ;concerned for their health;—is acceptable, attitudes like this one will not only exist, but also thrive,” said Melissa A. Fabello, body image expert and Managing Editor of Everyday Feminism.

This is not, as Arbour posited on Twitter, “satire,” in any way shape or form, but instead, it’s “definitely hate speech,” according to Lindsey Averill, producer and co-creator of "Fattitude," a forthcoming documentary exploring how popular culture dehumanizes fat people. “It’s bullying.”

When Arbour gets to her anecdote about being a passenger on an airplane next to a fat man (the horror!), it becomes crystal clear that she’s actually simply hateful, and looking to provoke viewers, rather than actually advance the conversation or offer anything remotely helpful. Adding nauseating asides like “big sassy black women in church dresses are my favorite thing in the world” in a mock Southern accent does not make her video funny; it makes it sad—and racist to boot.

“Airplanes are discriminatory toward anyone who isn’t in an average body size. It’s not just people who are fat, but also people who are tall. But if somebody is 6’3” and their leg is coming over into your seat, you’re not thinking, you’re a moral failure,” said Averill. “You’re thinking, the airlines are terrible, the poor man is suffering. We look at fat people and we make a moral judgment, instead of looking at fat people and thinking, wow, you should totally have a bigger seat and the airline isn’t doing right by you.”

On a positive note, “Dear Fat People” has spawned dozens of response videos by YouTube users who are disgusted with Arbour’s attitude. In one, Sarah Belyea says, “It made me feel like absolute shit…I believe Nicole did want to sort of send a funny but serious message that she’s concerned for people’s health, which is code for…not actually caring about people’s health…If you want somebody to make a change, they need to want to change themselves.”

Grace Helbig, star of the eponymous talk show on E! who launched her TV career as a YouTube comedy star, said she was unexpectedly “triggered” by Arbour’s video. “I was just bummed that someone that seemed really smart and funny would speak about weight that way…What you’re really seeming to say is ‘stop being a human being. Stop having emotional issues. Stop, just stop, because it’s bothering me, so if you could just stop, because I’m being affected by your pain.’ It just becomes a little selfish and mean, and I don’t think you are that person.”

Popular YouTube vlogger Tyler Oakley spoke out on Twitter, writing, “you are worthy of self love & inner peace no matter your size or shape or weight or height or really anything about your body“ and “calling out problematic behavior is not an attempt to ruin someone's career, it's giving them a chance to have one in the future.”

In Arbour’s worldview, anyone who’s fat not only got that way simply by pigging out, they also are unhealthy by definition. False. As Whitney Way Thore, star of TLC’s "My Big Fat Fabulous Life," said in her response video, “You cannot tell a person’s health, physical or otherwise, from looking at them.”

Furthermore, we have anecdotal and scientific evidence that fat shaming of the sort Arbour engages in—belittling fat people, blaming them for their weight, equating fatness with moral and health failings, expressing sheer disgust for the existence of fat people—might actually have the opposite of Arbour’s intended effect and cause people to gain weight. A 2014 University College London study of 2,944 UK adults over four years found “those who reported experiencing weight discrimination gained more weight than those who did not.” So no, Nicole Arbour, you won’t magically cause someone to lose weight by telling them how worthless they are because they’re too big for your comfort.

Arbour is deluded if she thinks fat people should be grateful to her for saying something that, essentially, the entire world has already been telling them for decades.

“People don’t watch it and go ‘oh god, I should totally go on a diet,’ which is what Arbour implied it would do,” explains Averill. “The majority of the fat people on the planet are feeling anxiety about their bodies without Nicole Arbour telling them that she thinks they’re fat and doesn’t like them. We live in a culture that’s constantly demonizing people who live in fat bodies; believe me, they already know.”

Averill has felt the brunt of Arbour’s way of thinking since she was little. “I went home at six and begged my parents to put me on a diet because the kids at school were so mean to me. I didn’t forget at 37.” Averill currently weighs 230 pounds, swims 75 laps a day, and says her heart is in perfect shape, but doesn’t want Arbour’s—or anyone else’s—seal of approval because of her health status, but because of her humanity. “The fact that I exercise doesn't make me more deserving of respect.”

Arbour seems to feel that she’s swooping in to save fat people from themselves. “I've received so many thanks messages from obese and overweight taking shit into their own hands now. #FeelingProud #GOTEAM,” she Tweeted. As YouTube vlogger Meghan Tonjes put it in a tearful video response, "I know what it's like to sit there as a teenage girl and see something like that. It doesn't have the effect that people like this assume it does, where...it just motivates me to go and lose weight. To plant a seed of change and to plant a seed of positivity and growth, but to plant it in soil that's based around complete hatred of yourself, nothing's ever going to happen. Nothing real is ever going to be sustained from that. For every person that's going to leave a comment on the video and say 'I watched this and it changed my life and it made me go to the gym and take my life in my own hands and my health,' I promise you there's five more people that are sinking a little bit more into themselves and feel worthless watching something like that."

What’s even more galling is that Arbour goes on a side tangent about how “fat shaming” does not exist, as if by simply saying it, she can make it so. Her claims are “not factual,” according to Averill, who added, “There’s entire academic departments dedicated to studying how fat people are oppressed in culture and the mistreatment they receive,” citing the Rudd Center for Food Policy and Obesity at the University of Connecticut.

Laura Vogel, a social media marketing consultant who’s worked with leading YouTube personalities, said “Dear Fat People” is simply par for the course for Arbour. “All of her videos use shaming to a different degree to get people to act in ways she views as appropriate or acceptable. In her “Dear Instagram Models” video, she’s slut shaming and body shaming in order to get people to post Instagram photos that conform to her standards. ‘Dear Fat People’ just took it to a whole new level.”

Vogel cautions that Arbour isn’t doing herself any favors in terms of advancing her career on YouTube. “The way that the YouTube platform is built encourages users to work together, to create collaboration videos and to reference each other's work. It lends itself to community. You get more views based on engagement, so you want people to like your stuff; you want people to share it. They’re not going to do that if it makes them feel bad about themselves, if it puts them down.”

In a world where YouTube’s top stars are getting endorsement deals, book deals and, like Helbig, talk show hosting gigs, the name of the game is collaboration, not controversy. The video equivalent of clickbait is bad business, according to Vogel. “It’s not paying dividends unless her objective is to get a job outside of YouTube; this might have created an immediate increase in views and subscribers, but it doesn't create the kind of goodwill one needs to foster a long-term YouTube following.”

Fabello believes Arbour’s video is just the latest example of prejudicial views that we need to work on changing if fat shaming is ever going to end. “What people need to realize is that Nicole Arbour's hatred—and in particular, this video—isn't an isolated incident,” she said. “It's the product of society's animosity toward fat bodies and our own deeply internalized biases against them. Arbour's video isn't really about Arbour alone. It's about all of us and the oppressive views we've been taught to hold. And fighting that isn't simply about a YouTube video being taken down. It's about looking within ourselves and being willing to challenge our own perceptions.”

Watch Salon's video compilation of the most heartfelt responses to "Dear Fat People" below.