Down syndrome, the "new front in the abortion wars": What ABC Family's "Switched at Birth" gets right — and wrong — about families like mine 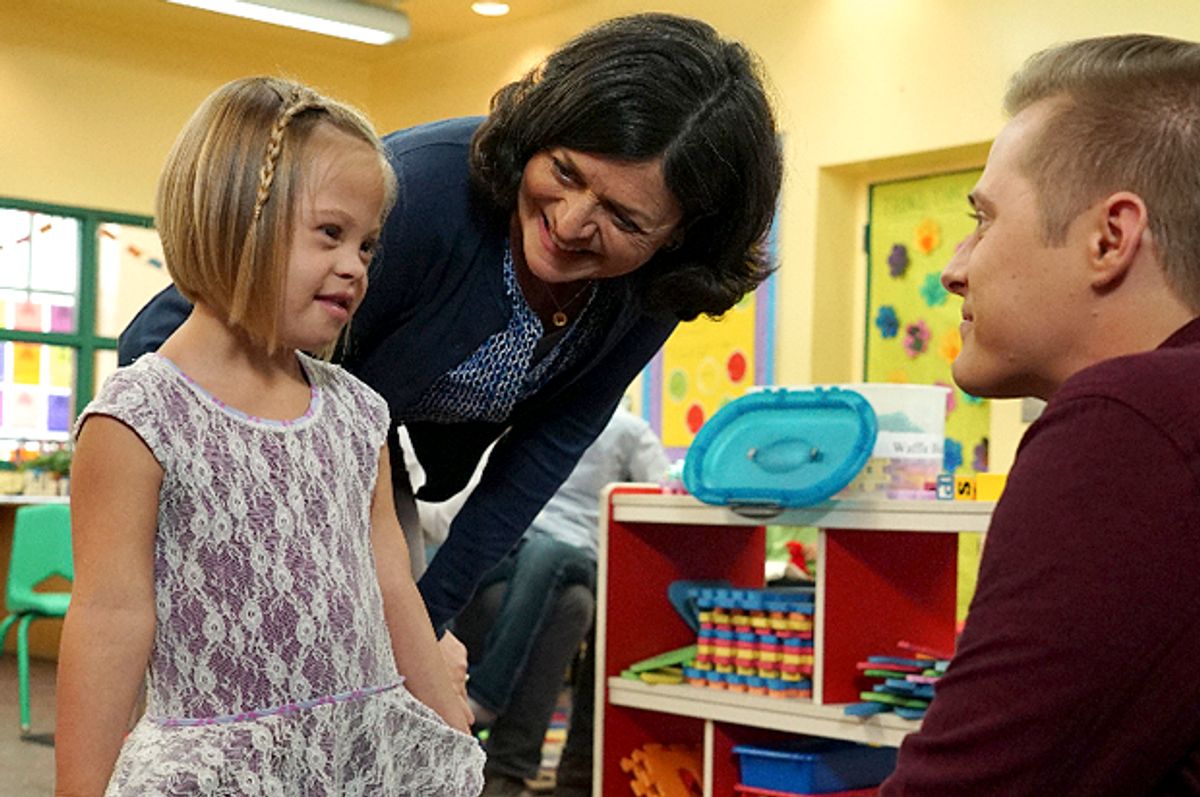 Sofia Sanchez, Lenora May and Lucas Grabeel in "Switched At Birth" (ABC Family)
--

On Monday night, Caleb Moody made me cry. Moody was making an appearance on "Switched at Birth," the Peabody Award-winning family drama from ABCFamily, as the show introduced a new plot arc about a prenatal diagnosis of Down syndrome. Toby, one of the main characters, has just found out that his ex-girlfriend, Lily, is expecting. Lily underwent genetic screening and received a result indicating a likelihood of Down syndrome.

Toby supports Lily’s right to choose, but also must figure out how he feels. His sister, Bay, takes him to a school for disabled children. There, he meets Sophie, a 5-year-old girl with Down syndrome. Jamie Brewer, of "American Horror Story" fame, makes a cameo as a teacher’s aide, and there are lots of cute kids, but the emotional heart of the scene belongs to Caleb. He plays the father of a child with Down syndrome. As the camera pans around the room, Caleb tells Toby, “I’m sure you’re still in shock, maybe sad too. In the beginning, it can hurt a little bit to see other kids. And there’s definitely some tough times, too. No doubt about that. But I can promise you, it’ll be the single most enriching experience of your life.”

Each time I watch the scene, tears fill my eyes. I plunge back into the complex emotions surrounding my son’s birth, his diagnosis and our shared path from those early days. Caleb gets it, because he’s also the father of a boy with Down syndrome in real life. He was thrilled to get the chance to be part of a show that’s done so much to “shine a light on special needs. “There needs to be more of that” from media, he said to me on the phone.

The premise of the show is that two girls were switched at birth (as one might guess). Bay (artsy and dark-haired) grew up with a conservative white wealthy family, while Daphne (athletic and fair) grew up with a working-class Latina single mom and her grandmother. Such a premise could have resulted in a typical teen soap opera, and while the show can be melodramatic, its engagement with disability issues since the very first episode has given it a kind of impact that outstrips its genre. Teen melodramas do not typically win Peabody Awards.

Daphne is deaf (and played by Katie LeClerc, who is hard of hearing). The show uses sign language extensively and has dug into major issues related to deaf culture: sign language vs. lip-reading, deaf-only vs. mixed education, police violence, sex, sexual abuse and assault, cochlear implants and much more. No show is perfect, but this one has consistently impressed me with its approach to issues that I care about. It casts people with disabilities to play characters with disabilities whenever possible and it tells good, non-stereotyped stories about people with disabilities. I can’t really ask for more.

The show’s foray into Down syndrome and prenatal testing turns out to be more timely than its show producers could have predicted. In the last few weeks, by chance just as Lily was revealing her positive test, the New York Times ran a front-page story on a bill in Ohio that bans abortions if the mother is terminating due to a prenatal test for Down syndrome. They framed it as a “new front in the abortion wars,” and an issue in the presidential race because Ohio’s governor, John Kasich, is running for the GOP nomination (I wrote about it here).

Enter "Switched at Birth." How would the show, written and filmed long before this political issue exploded onto the scene, handle such a complex issue?

Overall, they did a great job. The writers researched the parent experience, cast actual people with disabilities (and, with Caleb, an actual father of a child with Down syndrome) in the episode, and directly addressed plenty of the major issues in appropriate ways. Bay, at one point, asked the special needs teacher if she was sugarcoating all the challenges by showing off these cute kids in the classroom, and the teacher points out that there’s a wide spectrum of ability for all children and emphasizes that people with Down syndrome, today, are living long, happy and productive lives.

The message carries through. Lily and Toby, later in the episode, have a long talk in which Toby says, “This kid is not going to be a typical kid, but there’s no such thing as a typical kid.” His sisters, after all, were switched at birth! One is also deaf, and that experience with one type of disability consistently informs the ways in which the characters talk about Down syndrome. Daphne, the deaf sister, explicitly embraces a cross-disability identity. Toby and Lily decide to keep the baby. Toby’s family, who initially expressed their reservations (in part because Toby has always been the immature character), end the episode by revealing to Toby that they are wearing tall mismatched socks. These socks, it was revealed earlier in the episode, were part of an awareness campaign for World Down Syndrome Day. Everybody hugs.

I am thrilled, overall, with how "Switched at Birth" handled things, but I hate those socks. In fact, I am deeply troubled by all the emphasis on cute and adorable within the discourse of Down syndrome in American media. That’s definitely the case with this plot arc. Too often, Down syndrome is represented by a cute white middle-class child under the age of 10 (like Sophie, in this episode, or like my own son Nico). If they return to the world of Down syndrome in later episodes or seasons, I hope they think about how to embrace the full diversity of the community. That’s why I hate the socks. It plays to the least interesting thing about Down syndrome, cuteness, without a clear pathway toward engagement with more persistent problems.

I also wonder about Lily’s test. She’s in her first trimester and seems to have had standard genetic screening. Those screening results are not diagnoses. As Mark Leach, founder of downsyndromeprenataltesting.com writes, no test is ever positive. At most, there’s “a result reporting an increased chance for Down syndrome.” There’s too much misinformation about what these tests mean. Testing companies inaccurately hype their product’s accuracy. Studies show that doctors too often tell expectant mothers things that aren’t true. Expectant mothers are, for example, often told that a child with Down syndrome will lead to divorce, when in fact rates for such families are below the national average. I understand why the show didn’t deal with that kind of ambiguity, but around the country too many women are choosing to terminate based on probabilities misrepresented as diagnoses. Neither Lily nor Toby should be so confident in the test results.

Finally, I wish that Bay and Toby had been shown encountering people with Down syndrome in any other environment than a segregated school. "Switched at Birth" ran a major plot about deaf debates regarding segregated vs. integrated education, promoting the important perspective that deaf-only schooling allows children to become part of a sign-language culture. In the Down syndrome community, although often some separate education may be part of an Individualized Education Plan (IEP), we’re focused on building more and better inclusive options in the face of considerable opposition. We make “Down syndrome” less scary to expectant parents by showing inclusion rather than isolation, no matter how cute and charming.

Although these criticisms matter, I recognize that no one show can possibly address every facet of a complex subject like prenatal testing. "Switched at Birth" took the risk to do a plot about prenatal testing and abortion, engaging a hot political issue (even if unknowingly), and presumably offering viewers their first glimpse of these vital debates. They did an excellent job. The message ends up being: A woman has the right to choose and this time she’s chosen to have a child with Down syndrome with full support of her co-parent and the broader community. And now I’m going to sniffle again.