"They talk to you like you’re human": A center for the homeless in San Francisco takes a unique approach -- and it seems to be working

Center provides services a shelter can't, like letting a husband & wife stay together: "We’re meeting who you are" 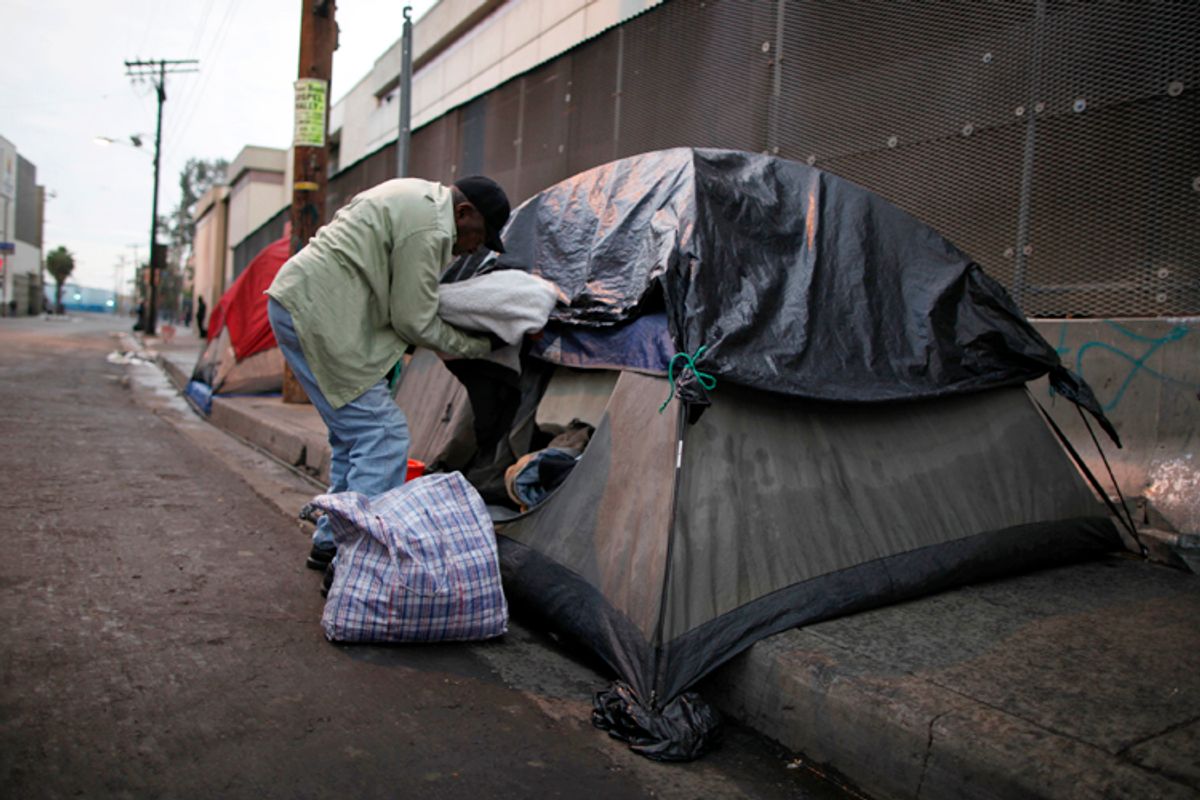 Alan Nethe, who spent 15 years on the street, answers succinctly when asked what he likes about the new Navigation Center in San Francisco’s Mission District.

“Everything,” he says. “What’s not great about it? You’ve got food, laundry, showers, and everybody in here cares about the program and how it runs.”

It’s not just the kitchen, community room, laundry, and showers that make the center unique. Here, in the site of a former high school, city officials are trying something that hasn’t been done anywhere else: moving in whole homeless encampments. That means couples or communities that have formed can stay together. By providing a place to store their belongings, an area for their pets and no curfew so people can come and go, they are removing barriers that keep people out of shelters, says Bevan Dufty, the head of Mayor Ed Lee’s Housing Opportunity, Partnerships and Engagement or HOPE team.

It seems to be working. The controller’s office works with the center to keep track of what happens with the clients and where they go, and the majority of those who leave go on to housing. Jennifer Friedenbach, director of the Coalition on Homelessness in San Francisco, says she was concerned that law enforcement would use the center as a reason to harass homeless people remaining on the street, but that hasn’t happened. (Although San Francisco Mayor Ed Lee has recently gotten flak for a crackdown on the homeless ahead of the Super Bowl.)

“I would call it successful,” she said. “Folks staying there are treated really well and getting a lot of resources. The staff is wonderful. It’s service intensive, and they’re doing all the stuff that should be done in getting them housing. It’s how it should be done — that level of urgency applied needs to be applied citywide.”

Dufty says he got the idea when he leased a church and moved in a whole encampment near the Giants baseball stadium, along with everyone’s possessions and pets. Out of the 30 people there, 29 were in single-room-occupancy hotels in 24 hours, he says.

“It was a great experience, and that was the initial spark,” he says. “In shelters, a husband and wife aren’t going to stay together and their dog can’t stay with them or their stuff gets ripped off. Or you can’t take your stuff. Just one drawer doesn’t work for people. An outreach worker can only get you a bed for one night, and nobody ‘s going to give up their possessions for just one night. There’s an impression people are refusing services, but the services don’t work for them. We’re meeting who you are and where you are and that’s dramatically different.”

An anonymous donor gave $3 million to fund the center; $1 million of that for supportive housing. They have capacity for 75 people — there are about 50 here now — and the idea is to get people into permanent shelter as quickly as possible. Dufty was aiming for a week to 10 days, but since the center opened a couple months ago, that has proved a little ambitious. Still the place is dynamic with services to help people, be it with jobs, dealing with substance abuse or getting benefits, so they can move on.

Episcopal Community Services is the lead nonprofit staffing the center and providing services along with the Department of Human Services. Everyone working there should get a big raise, according to Nethe.

“Those other places they’re just there for a check,” he said. “They don’t care if you breathe or die. Here they care. They talk to you like you’re human.”

Lead case manager Veronica Forbes is one of those caring staff members. She was drawn to a pilot program, and she welcomed trying to create new structures and systems to get people housed. Forbes says she can have up to 20 people on her caseload, and there’s a big range, with some fairly independent while others need a lot of support in navigating the system. Forbes finds being able to remove obstacles to housing extremely satisfying.

“Myself and another staff member wrote our theses on what a perfect center would be,” Forbes said. “This was pretty much what we envisioned.”

Getting people who come in with maybe no identification or income and getting them into housing is complex work, says Sam Dodge, the deputy director at HOPE. But letting people in with very low barriers and without most of the rules that regulate shelters, that means staff members can focus just on helping the clients. And for the people staying there, not worrying about getting a meal or keeping their bed or guarding their stuff or getting a shower means they can relax and start to do things to improve their situation.

“The feeling is calm and quiet,” he said. “You wouldn’t know 70 hardcore long-term homeless people are staying there. It has a very relaxed vibe.”

And when people are moved out of encampments on the streets, more don’t usually take their place, Dodge says, giving him hope this is a way to help cities with a seemingly intractable homeless problem.

Police officers bought Marco Simonetti a doughnut and coffee before bringing him to the center from his tent a few blocks away. Simonetti got robbed at one shelter. He holds up his arm to show a long scar on his forearm he got at another. This place doesn’t compare to any other, he says, gesturing inside a dorm room.

The center is in line with a national trend of trying to get people into housing first; it’s not that they don’t need other kinds of help, but the thinking is get people inside, where they can take a shower, close their door, and get some sleep, and that can help a lot. Dufty says in spite of the astronomical prices in San Francisco, his department has a “rich housing stock” with rooms in SRO hotels getting fixed up. A priority for him at the Navigation Center is expediting bureaucracy that makes it so hard for people to get their benefits or identification. Before the center opened, Dufty helped a 24-year-old woman who’d been living in Golden Gate Park for two years get her General Assistance benefits to move into housing. Even though he accompanied her to appointments it took months. The time at the center is significantly less—usually under a week— something he was determined to make happen.

The HOPE team’s community liaison, Santiago Lerma, worked with the businesses and residents around the center to let them know it was coming and to get input on what they wanted. He says for the most part, people who live and work near the corner, which has a lot of drug dealing, public drunkenness and homelessness, welcomed it.

Brenda Ochoa works at the Walgreen's across the street from the center and her mom lives down the street. Ochoa says she thinks some people are taking advantage of the services.

“I see a lot of drunk people hanging out in front,” she says. “Kids see that.”

They’ll see it anyway, says Peter Avila, principal of Marshall Elementary School, down the block. He says when Dufty talked to him and the parents at the school about plans for the center, the reaction was far from outrage.

“They were happy something was being done to address an issue that affects our community,” he said. “Before people would buy drugs at the BART station and go to that alley next to the center to smoke crack or shoot heroin, and now that isn’t happening.”

Bevan Dufty knows it will take more than two months to make a real impact on homelessness in San Francisco with thousands on the street. But he’s seen the center make a significant difference for the people who have been through it.

“It’s rewarding seeing how happy people are,” Dufty said. “My biggest concern is ramping up the housing, and the mayor’s proposal of $29 million over the next couple years helped answer that.”

Emily Wilson is a freelance writer who teaches basic skills at City College of San Francisco.