The new charter school scheme: This is how GOP and privatizers have bled Pennsylvania schools 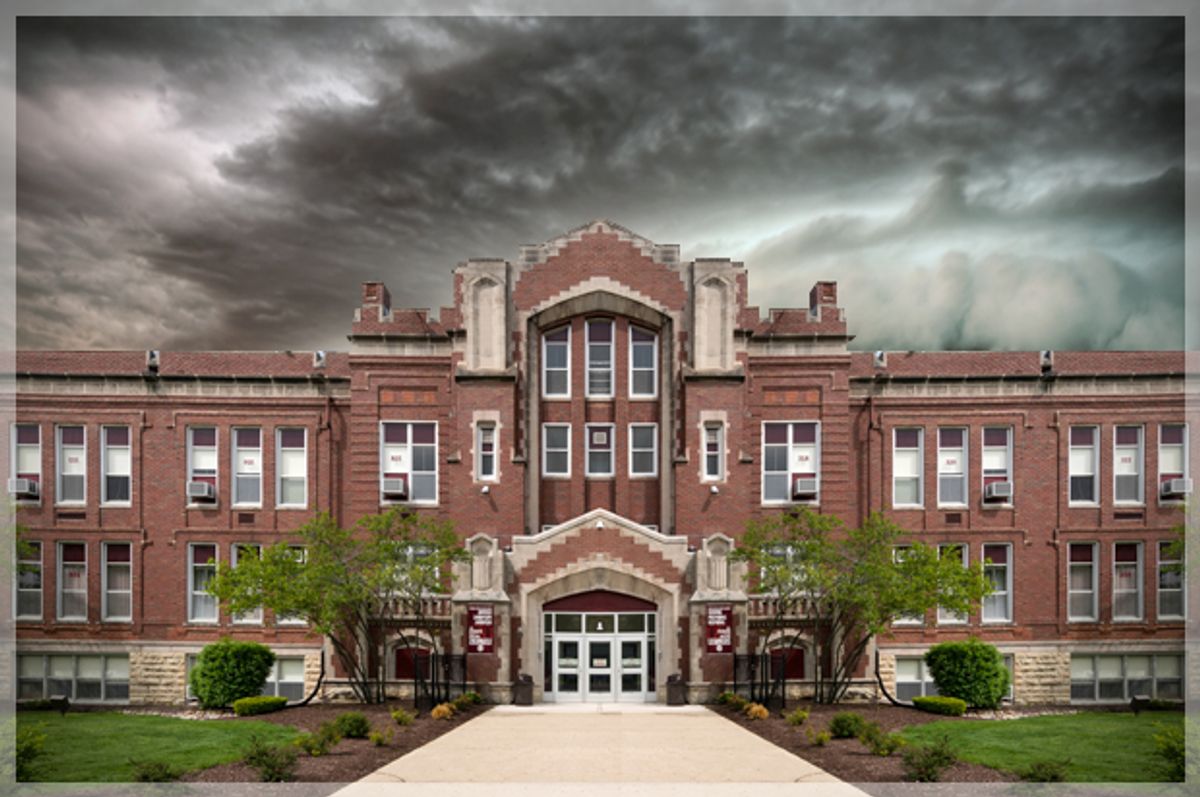 As schools across Pennsylvania open their doors for the new school year, there's one district in the state where teachers will be hard at work even though they're not likely to get paid.

The teachers are actually already on the job, having reported for work a week early as originally expected. But when the district's administration announced it could not meet a scheduled payroll on September 9, a week after classes start, the teachers – along with janitors, nurses, and other school personnel – held an impromptu meeting and voted to temporarily forego pay.

The teachers are employed by the financially strapped school district of Chester Upland, located about 20 miles west of Philadelphia. Years of deliberate under-funding by the state, coupled with policies that favor the rapid expansion of publicly funded but privately operated charter schools, are bleeding the district. The dedication of committed and caring educators seems to be one of the few forces binding the shattered school community together.

"We aren't broken," says Dariah Jackson, one of the teachers working for no pay tells Salon in a phone interview. Jackson, a Special Education and Life Skills Support teacher in grades 3-5, says, "I'm in my classroom, as are my colleagues, ready for the students to walk through the door next week."

When asked how long is "temporary" in their resolve to work with no pay, Jackson says, "No one has set a time limit for now. We have to be here for our students. They need a place to go."

But while Jackson and her colleagues show their determination to meet the needs of the students, there are forces acting in Chester Upland, and across Pennsylvania, focused on anything but that.

"Chester Upland is broke," explains Wythe Keever, spokesman for the Pennsylvania State Education Association. "Actually, they're a lot worse off than broke," he tells Salon. "They have an operating budget deficit in excess of $20 million that is expected by the end of the year to go beyond $40 million."

“The school district is in danger of not existing,” says Jeff Sheridan, a spokesman for Pennsylvania Gov. Tom Wolf, in a report by Lyndsey Layton of The Washington Post.

What's not helping for sure is an ongoing imbroglio over Pennsylvania's state budget. Legislators and Wolf have been unable to come to an agreement on the state's fiscal responsibilities, delaying budget completion for over 50 days. What’s the fight about? Education funding. The newly elected Democratic governor insists on increasing school funding and correcting unfair distributions – particularly those that go to online "cyber" charter schools – while an entrenched Republican legislature continues to exhibit reluctance to adequately and fairly fund the state's schools.

So school districts across the state are having to dig deeper into their own local resources to fund the reopening of schools. Districts like Chester Upland, that are heavily reliant on state aid, simply don't have coffers to dig into.

But there are also long term "structural problems," explains Keever.

As Layton recounts in her report, "Chester Upland’s financial problems date to 1994, when it was first classified by the state as being in 'economic distress.” The district has been in and out of state receivership since.

"A similar financial collapse occurred in the district in 2012," Layton continues, "and the teachers also agreed to work without pay then. In the end, a federal judge ordered the state to pay the district, and lawmakers arranged a bailout, so that employees’ paychecks were just a couple of days late."

One of those "structural problems" is that Chester Upland is a school district serving a lot of families living in poverty. According to Wikipedia, in 2009, "the District residents' per capita income was $13,521, while the median family income was $30,900." Both figures are way below national and Pennsylvania state averages. Only 10 percent of the people who live in the school district have college degrees.

Schools that serve communities that are so disproportionally poor are bound to be financially at risk in a system such as America's where the financial base for schools starts with local property taxes. But the state of Pennsylvania compounds the problem by deliberately under-funding the schools in the state that are most in need of money.

As Rutgers University professor Bruce Baker explains on his blog, “the Commonwealth of Pennsylvania has among the least equitable state school finance systems in the country,” giving less state and local revenue to the state’s highest needs schools like Chester Upland.

A national report released by the U.S. Department of Education earlier this year spotlighted the Quaker State as being among the worst of the 23 states across the country that distribute more education money to richer school districts and less money to those with the least means.

Charter schools add to the financial burden placed on resource-starved schools like those in Chester Upland.

According to a local news outlet, teachers in Chester Upland "say the district's ongoing financial problems are because of the state's funding formula, specifically what the school district is required to pay to charter schools. The school district receives about $16,000 for children with learning disabilities from the state, but it is required to give the charter schools $40,000 for each student listed with a learning disability."

"It's absolutely an unsustainable expense," Keever explains. The Chester Upland district now pays about $64 million, over half of its budget, to the charter schools – more money than what the school district gets from the state.

Further, as Keever explains, "When students and funding are drawn away from a traditional public school, the traditional public school can't reduce their overhead because they have fixed costs. They have to operate the buses and feed the students and pay the light and water bill. Charter schools taking away a few students from different grade levels doesn't produce any savings. You still have to staff the same number of classrooms."

To be fair, charter schools, which have been expanding over the years, now educate about half of the students in the district. But there are good reasons to believe the charter schools have turned these payments for special education services into a profit center.

"The charter schools are submitting bills for students with special learning that are $10,000-17,000 more than what neighboring school districts are paying.," Keever points out.

Indeed, Valerie Strauss, on her blog at The Washington Post, points to a report from Chester Upland’s state-appointed receiver, Francis Barnes, who documents how the charter schools seem to mine the local district of low-cost special education students while leaving the traditional schools with students who have the most severe disabilities. He points to data showing the district's charter schools tends to serve high proportions of low-cost special needs students – those with speech and hearing disabilities, for instance – while serving low proportions of high-cost special needs students, such as those with autism or emotional problems.

Charter Fraud Is Rampant in Pennsylvania

It's not at all hard to believe there might be something fishy about a charter school operation in Pennsylvania. Last year, a report, “Fraud and Financial Mismanagement in Pennsylvania’s Charter Schools,” found charter school officials in the state have defrauded at least $30 million intended for school children since 1997.

The report found an administrator who diverted $2.6 million in school funds to a church property he also operated. Another charter school chief was caught spending millions in school funds to bail out other nonprofits associated with the school. A pair of charter school operators stole more than $900,000 from the school by using fraudulent invoices, and a cyber school entrepreneur diverted $8 million of school funds for houses, a Florida condominium, and an airplane.

Because Pennsylvania spends over a billion dollars a year on charter schools, the $30 million documented in this study is likely the minimum possible amount.

None of this evidence of financial fraud has been uncovered by state agencies overseeing the charter schools. The evidence has been brought to light by whistleblowers, media coverage, and watchdog groups – not by state auditors who have a history of not effectively detecting or preventing fraud. And charter schools, which self-report their enrollments to the district and the department of education, can operate for years without fear of an audit.

Charter Operators Get Mansions While Teachers Can't Get Paid

What needs to change, at the very least, is the funding formula for how charter schools are paid for special education services.

To his credit, Governor Wolf has taken steps to correct the funding formulas for special education in a way that would help cash strapped districts like Chester Upland. The charter school industry, unfortunately, has fought him at every step, and Wolf's latest proposal was rejected by a Pennsylvania district court.

In Chester Upland specifically, "The charter schools have accumulated massive fund balances," due to gaming the state's charter funding system, Keever contends. He points to one charter in particular, Chester Community Charter School.

Chester Community Charter, the largest charter in the district, is managed by a company owned by Vahan Gureghian. Gureghian, an attorney and prodigious donor to Republican politicians, recently put on the market his Palm Beach, Florida mansion listed at $84.5 million. The "French inspired" house features 35,000 feet of living space, a bowling alley, and a moat.

"It's difficult to pin down how much the Chester Community Charter School and others have profited," Keever admits. "The charters have refused to honor right to know requests under the state's open records laws, so there's little to no way to document how much the management company that runs that charter is actually taking out."

While the full extent of charter school profiting remains a question, nevertheless, Gureghian and his expansive Palm Beach estate strike quite a sharp contrast to Dariah Jackson and the rest of the Chester Upland educators willing to work for no pay.

Speaking from her small classroom, in a beleaguered school, in a long-struggling community, Jackson remains defiant. "I want everyone to know we care about our students. The paycheck is not what's foremost in our minds.

"Now we just need our elected officials to act."

For the students' sake, let's hope they do.