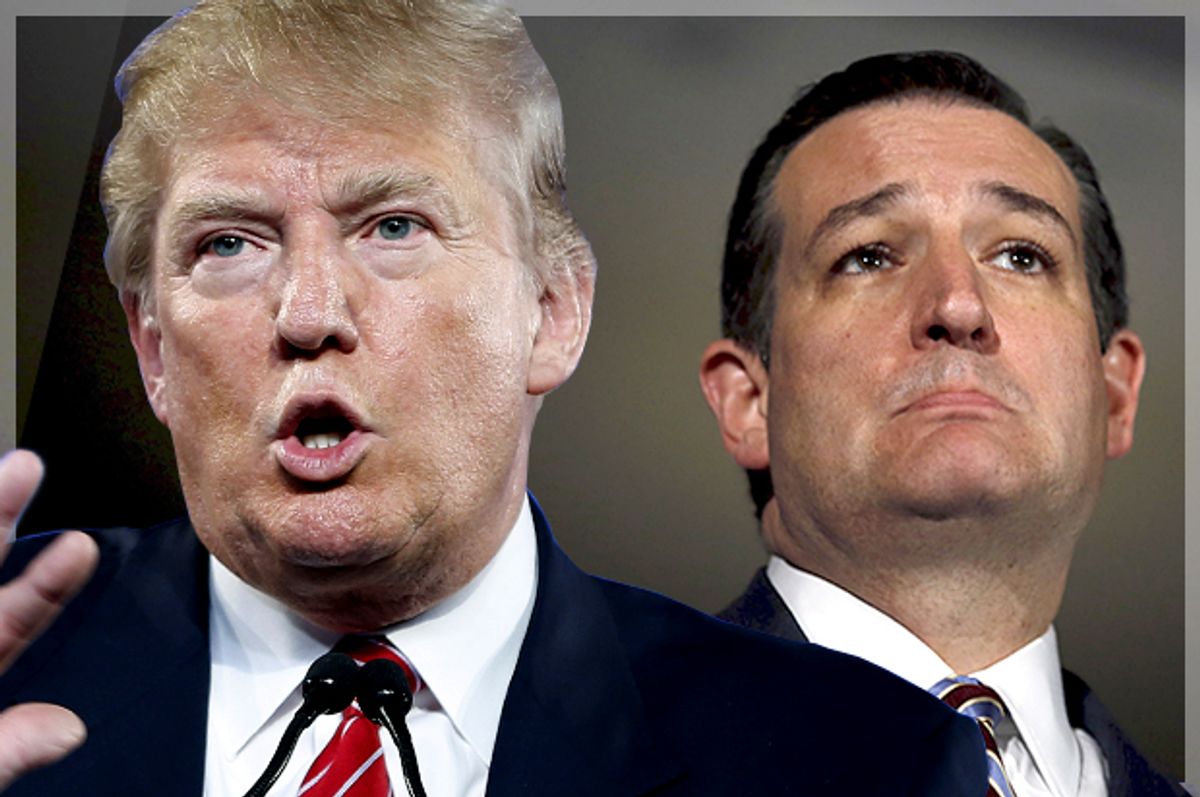 It's hard to imagine that anything could be more exciting than the Kentucky rally yesterday celebrating the release of Christian martyr Kim Davis. Both Mike Huckabee and Ted Cruz flew in for the event although, Cruz decidedly took a back seat to Huckabee by simply standing in the background as the former Arkansas governor begged the government to put him in jail instead of Davis. If it weren't for the fact that Huckabee's staff physically blocked him from participation, one might even think that Cruz was trying to preserve some semblance of mainstream credibility by avoiding center stage at yesterday's circus (which featured confederate flags and references to the Holocaust). But that would only make sense if he weren't willingly sharing the stage today with the clownish Donald Trump and some of the most rabid Islamophobes in America for a major rally against the Iran non-proliferation agreement.

That is not to say that there is no argument against the Iran agreement that isn't based in religious and ethnic bigotry. There are people of good will who are not in favor on the merits and many others whose antagonism is based on a philosophy that says an aggressive military posture is the only legitimate form of foreign policy. But that is not exactly the case here. As one might expect, Cruz himself is taking the hard line -- his opposition is based upon his affiliation with Christian conservatives and their blind assumption that Iran must be ostracized and marginalized, if not obliterated entirely, lest it destroy Israel. And, as a creature of the far right, Cruz undoubtedly also believes that a hawkish military posture is the default position in all circumstances (Unless a Democrat proposes it, of course.)

Trump is a more interesting case, a man whose "foreign policy" mostly consists of declaring that in any given situation he will do the right thing (details to be named later) "so fast it will make your head spin." He does say that he will be "very, very good" for the military, so there's that. But Iran is a special case for him, because the current controversy is based upon a non-proliferation agreement that's been hammered out over a long period of time between several parties. That means it's a "contract," and while he may not know much about foreign policy and national security, The Donald knows him some contracts. He spoke with The Daily Caller about his complaints about the deal:

TheDC: What would you do the first day in office with the Iran deal?

Trump: Well, it’s going to be a signed contract, number one. And number two, and it’s going to be signed, sealed, and, unfortunately, done. Don’t forget, that’s going to be in a year and a half, right? So it’s going to be a signed contract, and that means a lot when you have it. But I would police that contract — you know, I’ve taken over plenty of bad contracts where I’ve bought things where deals have gone bad because the people doing it didn’t know what they were doing. I’ve made a lot of money by dealing with people that didn’t know what they were doing, like the president. And frankly, I would scrutinize that — I’m very good at scrutinizing bad contracts — and I would scrutinize that contract like nobody would ever scrutinize it.

TheDC: It sounds like what you’re saying is that you would be looking for a violation, and if Iran did violate any aspect of the deal, you would consider the contract null and void.

Trump: Exactly correct, exactly correct. I will scrutinize that — I’ve been very good at scrutinizing contracts. I’ve taken over contracts knowingly that the people that did them, you know, went out of business because of bad contracts that I’ve bought for tiny amounts of money.

TheDC: So I guess my question is, once you discover a violation — and presumably you don’t think it would be too hard to find one — what would you do after deeming the deal null and void?

It's unclear if he's actually read "the contract" or if he is even remotely qualified to understand it, but he's quite sure that he'll be able to scrutinize it, find the loophole and extricate us from it -- just like that time he exercised a loophole in a contract with an 87-year-old grandma who foolishly thought he was going to share some of his profits. (He sure showed her.)

It's hard to know what he means by "I would come after them like you would not believe" but it sounds very, very tough, since it will not only end the nuclear agreement it will actually stop people in Iran from saying things he doesn't like.

But for all the saber rattling and bizarre bombast, both Cruz and Trump are sensible, mainstream thinkers in comparison to the other sponsors of this rally. The Zionist Organization of America is a once-venerable mainstream organization that over time fell into irrelevance until they revived their reputation as a hardline Israel-hawk organization that positions itself to the right of AIPAC. It's still suspected to have very few actual members but it works as an organizational conduit between Republicans and wealthy Israel hawks.

Another sponsor, Tea Party Patriots, was once known as a grassroots "libertarian" movement devoted to opposing Obamacare and taxes until it was shown to be a project of the well-funded DC activist group called Freedomworks. Apparently it is now involved in foreign policy activism, which is not surprising since the Tea Party was always just a different brand name for the modern conservative movement, which has been hawkish since its inception. It was one of the sponsors of the heavily attended 9/12 DC rally, so perhaps that explains why it's involved here.

But the Big Kahuna sponsor of this rally has to be the Center for Security Policy, a far right national security think tank run by Frank Gaffney, a man so Islamophobic that he crusades against conservative movement made-man Grover Norquist because Norquist is married to a Muslim woman and has allegedly sold out to the Muslim Brotherhood. According to the far right World Net Daily:

Gaffney describes Norquist ... as the enabler for Muslim Brotherhood associates, providing them with access into the highest reaches of the conservative movement and the Republican Party through his many contacts. Norquist, the founder of Americans for Tax Reform, hosts a weekly political organizing meeting attended by many of the leading conservatives in Washington. “This is a ticking time bomb for the conservative community,” said Gaffney.

Using language reminiscent of the Cold War, Gaffney declared, “An influence operation is contributing materially to the defeat of our country, supporting a stealthy effort to bring Shariah here. “Grover Norquist is credentialing the perpetrators of this Muslim Brotherood influence operation,” he adds. “This is part of tradecraft, to get people who have standing in a community to give it to people who lack it, so they can do what they’re assigned to do in terms of subversion. We are in a war, and he has been working with the enemy for over a decade.”

You can only imagine what Gaffney thinks about President Obama. He's certainly full of questions:

"What if it turns out that some of the people the Obama administration has been embracing are actually promoting the same totalitarian ideology and seditious agenda as al Qaeda, only they’re doing it from White House Iftar dinners?”"

All the GOP presidential candidates are against this Iran deal, including Jeb Bush, whose brother and father's top foreign policy advisors Colin Powell and Brent Scowcroft, are supporting it. But only Cruz and Trump are rallying with the far right Islamophobes and extremist warhawks.

[I]f they are allowed to develop a nuclear weapon, and they can put one nuclear warhead anywhere on a ship, anywhere up and down the Atlantic, or for that matter the Gulf of Mexico, and they could fire it up into the air, into the atmosphere, straight up into the air, and if it gets high enough and the nuclear warhead detonates, it would set off what’s called an EMP, an electromagnetic pulse, and one done from the Atlantic would have the capacity to take down the electrical grid on the entire Atlantic seaboard. Now that would have number of immediate consequences. It would totally crater our banking, our finance our commerce, feeling a crippling blow to the economic strain of this country, but that would not be the most potent consequence of it. The most potent consequence is it would take down the delivery of food, and water, and transportation, and heating and air, and the consequence of that, the predictions are one EMP in the atmosphere above the Atlantic seaboard would cause the deaths of tens of millions of Americans dwarfing Hiroshima or Nagasaki, dwarfing September 11th. One nuclear weapon in one ship, and mind you, you don’t need any sophisticated targeting technology, you don’t have to hit your target, you have to fire it straight in the air and simply get high enough that it can take down the grid

That's quite the sensational scenario, isn't it? One wonders why they would bother to make such an elaborate plan when any use of a nuclear weapon would result in retaliation from any of hundreds of U.S. and allied nuclear bases all over the world. But it's a very entertaining scenario, you must admit. Maybe he can sell it to Hollywood and make some money.

Yesterday, enough Democrats said they would vote for the Iran deal to insure that it will go into effect. Perhaps those who had been agonizing on the fence simply heard what opponents of the deal were up to and realized that the only sane thing to do was take the opposite position. There are worse ways to make such a decision.

Or maybe they simply got word that the other two big headliners at the anti-Iran rally are Glenn Beck and Sarah Palin. If that doesn't tell you where the smart money isn't, nothing will.