"A Carlin Home Companion" for the hippest guy in the room: "He was born when the world was ready for him – he never took that for granted" 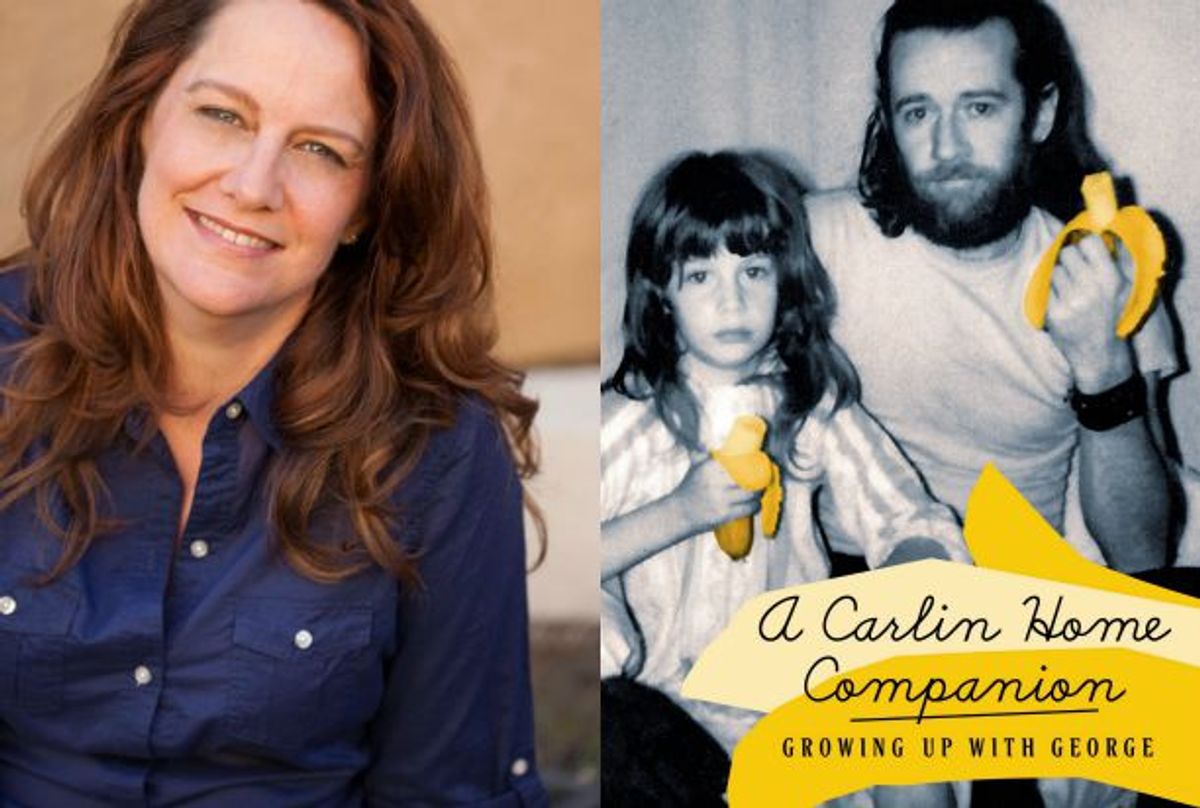 There’s so much pain – alcoholism, drug addiction, arrests, heart attacks, untimely death -- and so much pleasure -- humor and family togetherness -- in Kelly Carlin’s new memoir that it’s hard to figure out whether she deserves to be envied or pitied. “A Carlin Home Companion: Growing Up With George,” built in part from a series of Kelly’s solo shows, tells the story of the pioneering comedian through the eyes of his daughter, born in 1963. While still a child, Kelly saw George go from being a purportedly straight, suit-and-tie wearing comedian who could convincingly substitute-host for Johnny Carson to the bearded countercultural hero of “Seven Words You Can Never Say on Television.”

Much of “A Carlin Home Companion” looks at Kelly’s childhood, her parents’ tumultuous marriage, her mother’s raging alcoholism, the often sweet relationship she had with her father, and her own rebounding from her own difficult early years.

We spoke to Kelly Carlin from her home in Los Angeles; the interview has been edited slightly for clarity.

There’s a lot of loss and tragedy in here. I wonder if this book was hard to write – emotionally hard to put together.

Yes and no. Part of it wasn’t because I’d been talking about these events for about a decade in different storytelling venues, and working on myself for a long time. In many, multiple ways, whether straight therapy or meditation practice … and had healed from a lot of it. It prepared me well to tell my story.

But there were particular moments where I had to slow down and go back in time so that I could really articulate what it was like to be in those moments. And those were really tough – absolutely.

There are a lot of ups and downs in the book – especially in your early years. What do you recall as the best times growing up with your dad, and when were the worst times?

I’d say the best times were before I was 12, and my parents were sober. The moments of sobriety. And when we were on the road together – we were all very comfortable there, there was a sense of adventure, there was an excitement, always, around it.

Also really small moments – I would crawl into bed between my parents, we would watch TV together. It’s such a family thing, especially in the ‘60s and ‘70s, to watch TV together. That’s where your taste is shaped – by what your parents are watching and laughing at. So to be able to share Carol Burnett with my parents, or silly animal shows while my dad did the voices – there was a family intimacy in those moments that was so wonderful.

There were also a lot of low points. Which ones stuck out for you?

I think the most difficult times were when my parents’ alcoholism and drug addiction was so out of control, and I was old enough to kind of know what was going on. And having to live a dual life, between the insanity at home – very terrifying times -- and showing up at school to be the straight-A student and the good girl, the everything-is-fine dialogue with the world. That was hands down the most difficult and probably traumatic times of my life.

And then of course my mother dying was a very difficult time for me as well.

Your father became a kind of counterculture god in the ‘70s – do you think he enjoyed being famous? Did fame change him?

You know, he wanted to be famous early on – he had a Danny Kaye dream. I think he really did want it.

Did it change him? I don’t think it did. He was a man who always fought for the underdog, he loved the people he grew up with in his neighborhood and stayed connected with them throughout his life. He was a man who connected with everyone from a young fan to a homeless guy to maybe some famous person he was meeting – there was a humanity about my dad. Did [fame] give him the privilege to do his work in the world…Absolutely, but it didn’t change the core of who he was. He was always very grounded. His brother used to say that even when he was a child he was always the hippest guy in the room.

You’ve studied psychology and worked as a counselor – I wonder if that’s given you some clarity and some of this stuff that would have been very confusing to you as a kid or young adult.

Oh, an enormous amount. My education as a psychologist and counselor informed so much and helped me heal so much. I really understood what family dynamics are, how it works on the development of children, how families do certain things to create stability – even if it’s a dysfunctional stability. It all helped me take it a lot less personally. It allowed me to see the path of my life. And gave me a lot of freedom – I could walk away from the trauma part and see events that would have affected almost anyone that way.

You emerged from this complicated childhood as a therapist and as someone who wanted to be a performer. How do those two ambitions fit together, and how are they in tension?

They do represent two basic sides of myself – the extrovert and the introvert. I definitely have that part of me that wants to perform, wants to be seen and heard, wants to get a reaction from an audience, make people laugh. Watching my dad do it, I saw, there’s a payoff, for sure.

But I’ve always been a sensitive person: I was always shy and worried also about being a performer in the world. Getting a sense of the psychological journey a person takes across a life, I find fascinating. Having that psychological understanding informs all of the work. I understand my own life and what I’m dancing with at any moment. And as a performer, I understand where I need to go for an audience so they can connect in a deeper way.

Your dad was a great performer, obviously. I wonder, could he have happily done something else? What if he hadn’t made it as a comedian? Could you imagine a different path for him that would have been satisfying?

Boy, I don’t know. He talked openly in many interviews about his need for acceptance and approval and admiration – there was something about being seen and heard for him that was very important. He was an intellectual, certainly a philosopher. As long as he’d gotten to play with ideas, and represent them out in the culture, I think that would have fed him. But he also had this incredible gift of the gab, and the physicality of his comedy was always there, too. There really never was a plan B for Dad. He was born when the world was ready for him – he never took that for granted.