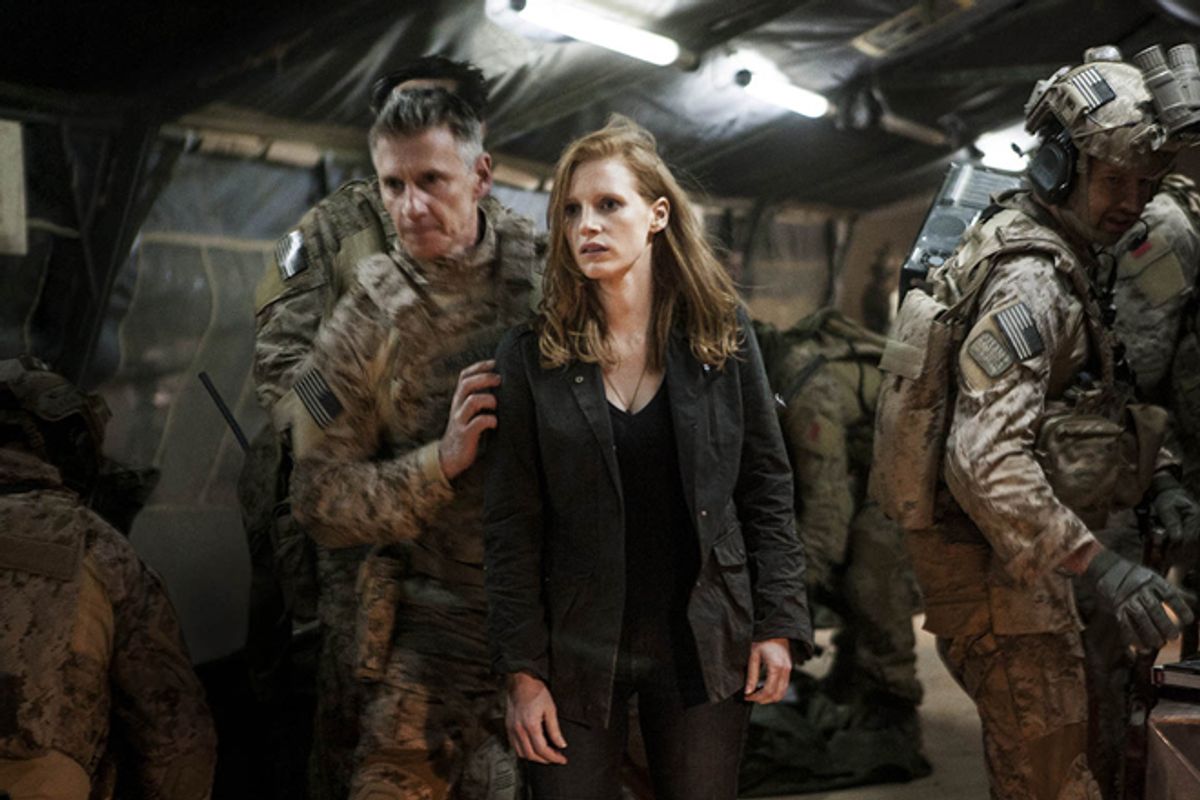 "Zero Dark Thirty," Kathryn Bigelow's film about the killing of Osama bin Laden, is a frighteningly well-made piece of work. It comes at you like a drug trip gone south, all jagged edges and anxiety. It catches hold of you and grips you as tightly as any movie possibly could. In terms of pure skill, Bigelow is a tough act to top. Therein lies the problem.

"Zero Dark Thirty" isn't propaganda like "Triumph of the Will" is propaganda. Nothing is, for one thing—Hitler is Hitler—and the narrative of the war on terror is too poisoned for something so unabashedly deifying. But in its feints towards moral ambiguity, its grim brutality, it's exactly the kind of movie a modern-day CIA propagandist would want made. After all, the message of the Bush years wasn't one of pure heroism. It was all about going to "the dark side." We were told repeatedly that we'd have to make certain ethical compromises and accept that that was just the way things were now. "Zero Dark Thirty" perfectly represents that point of view, and puts it across about as skillfully as possible. Among many controversial claims, it asserts falsely that CIA torture helped lead to bin Laden, a highly damaging claim to put in a major Hollywood blockbuster.

It makes sense that "Zero Dark Thirty" comes off like it was written at CIA headquarters, and that's because, for all intents and purposes, it was.

With each passing year, the story surrounding the making of  "Zero Dark Thirty" becomes tawdrier and tawdrier. We already knew that the CIA helped shape the narrative of the film, Now, thanks to an inspector general's report about "Zero Dark Thirty" unearthed by Vice's Jason Leopold and Ky Henderson, we know that the relationship between the agency and the filmmakers was even closer than previously disclosed.

Leopold and Henderson's reporting makes it clear that the CIA was involved at every single stage of the filmmaking process, and that that was exactly how Bigelow and writer Mark Boal wanted it to be. The duo "won unprecedented access to secret details about the bin Laden operation, and...got agency officers and officials to review and critique the 'ZDT' script," among other things, they write. Bigelow and Boal also took CIA agents out for meals and tried to ply them with expensive gifts; some of this back-and-forth wound up coming dangerously close the agency's own internal rules.

In one extraordinary section, Leopold and Henderson reveal that Boal was invited to a secret ceremony honoring the people involved in the bin Laden hunt. There, CIA chief Leon Panetta wound up discussing classified information, even though Boal wasn't authorized to hear it.

After reading the Vice story, Bigelow's 2013 line that "Zero Dark Thirty" got made thanks in part to an "enormous dose of luck" takes on an altogether different ring. Bigelow did indeed get lucky—lucky that the CIA was all-too-willing to open its doors wide to her. But it wasn't luck that the agency kept that door ajar for so long. That was because Bigelow was willing to market the CIA's own story about itself.

None of this would matter too much if Bigelow wasn't such an accomplished filmmaker, or if "Zero Dark Thirty" wasn't presented as a quasi-journalistic effort, almost documentary-like in its verisimilitude. But she is, and it was, and that means that "Zero Dark Thirty" stands a very good chance of becoming one of the key popular depictions of the bin Laden hunt. That's why Vice's reporting is vital. We need an honest reckoning with the moral depths we've so repeatedly sunk to in the years since 9/11, and we need to make sure that "Zero Dark Thirty" has no place in that reckoning.