Donald Trump's simpleminded circus: How to succeed in the GOP primary without even trying

This week's absurd rally against a done deal seals it. Trump is the funniest man in America — for now 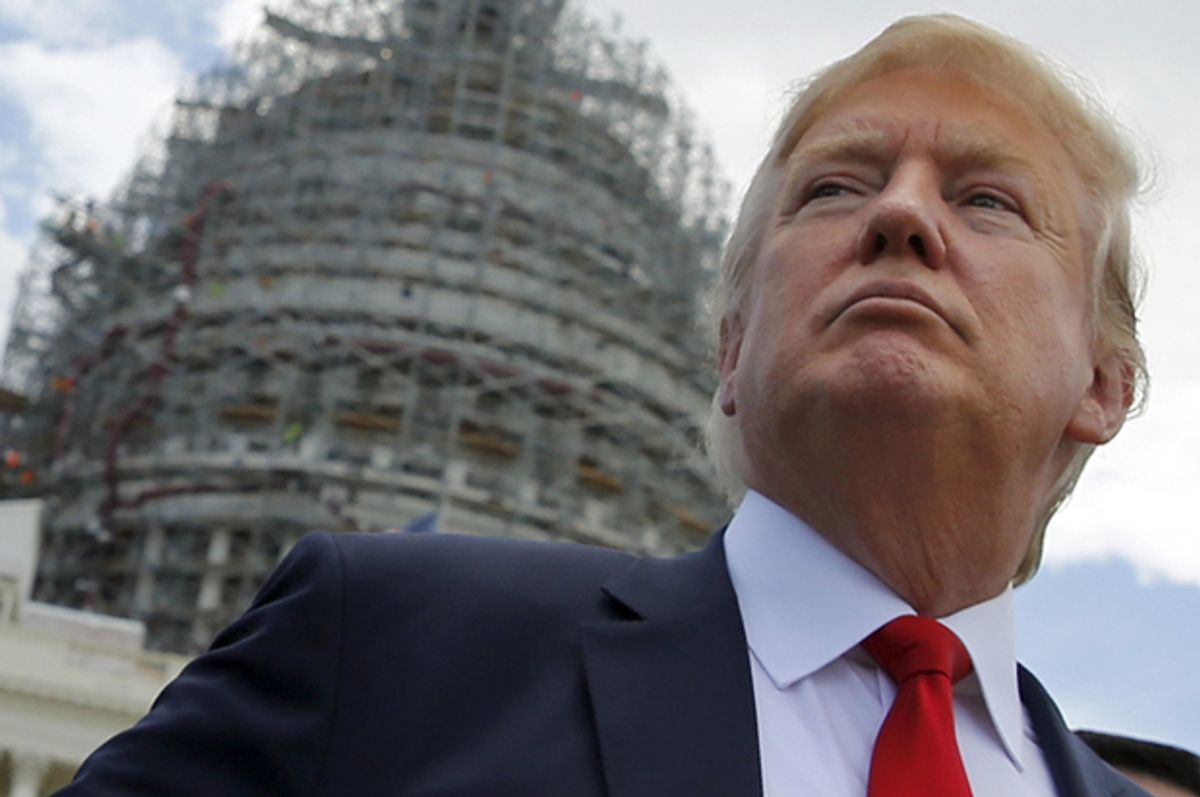 Stephen Colbert debuted this week as David Letterman’s “Late Show” successor, and despite a nearly disastrous technological snafu, his first few shows have gone pretty well. Yet as much as I enjoy Colbert — and especially this joke about Sen. Bernie Sanders — I gotta say, the funniest thing I saw this week had nothing to do with him. And it didn’t take place amidst the skyscrapers and bright lights of Manhattan, either.

No, this spectacle had a much drabber locale. And unlike Colbert, none of its stars could be accurately described as a triple-threat. True, its musical accompaniment was solid (aesthetically, if not necessarily legally). But to a certain degree it was the event’s amateurishness — its haphazard, ramshackle, chaotic energy — that made it so great. If more traditional, professional folks had run it, I doubt it’d have been even half as fun.

You’ve probably guessed this already, but I’m talking about the “Stop the Iran Deal Rally,” the carnival thrown Wednesday in D.C. by a group that calls itself the Tea Party Patriots. The one that was held after the White House had enough votes to protect the deal from Republicans. The one that featured Sarah Palin, Sen. Ted Cruz, and Donald Trump. The one that took a jackhammer to the border dividing reality from “Veep.”

If you haven’t already seen any footage — and if you have a good sense of humor concerning the ignominious death of representative democracy — I can’t recommend it enough. (This CNN clip is an okay introduction; the woman who says she opposes the deal because she has “a couple daughters in New York City” and “sure wouldn’t want to see them nuked” is my favorite.) But you can get a good sense from written reports, too.

My onetime colleague Jim Newell’s piece in Slate, for example, does a great job of establishing the kitsch-ceiling for the event. (Spoiler: It’s high.) But as good as the quotes from a guy Newell describes as wearing “a Hillary Clinton rubber mask” are, the piece does something more important: it provides a snapshot of the people going to Donald Trump rallies. And it suggests that they, too, would rather be somewhere else.

I don’t mean that literally. All the reports I’ve read suggest that most attendees had fun. What I mean to say is that many Trumpites — more so than devotees of Palin or Cruz — don’t sound very political. They don’t sound like the kind of people who spend their leisure time reading about electoral politics or watching “Meet the Press.” Instead, they sound like they showed up because they felt they had no other choice.

Take Pete Webb, for example, a gentleman who told Newell he’d come all the way from Miami and who believes Congress is “lame” and has “got to be stopped.” What’s got Webb so angry, presumably, is that Congressional Republicans won’t thwart the Iran deal. Not due to choice, but because foreign policy is usually the executive branch’s purview. And because the Constitution is big on that “separation of powers” stuff.

For many of the people at that rally, however, those explanations are no excuse. The problem is not that American government is complicated, or that the world is unfair. The problem, according to multiple speakers at the rally — Trump very much included — is that small-l “leadership” is lacking because big-L “Leadership” (i.e., Speaker Boehner and Majority Leader McConnell) is “stupid” and “weak.”

“We are led by very, very stupid people,” Trump told the assembled. He then promised to provide “so much winning” when he is president that “you may get bored.” For many of his supporters, that explanation is more than satisfactory. And the reason isn’t because they’re stupid (although that can’t be ruled out); it’s because they’re incurious. And they’re incurious because, well, they hate all this government stuff.

As I’ve argued before, Trump seems to draw people in as much for his authoritarianism as his bigotry. What he’s offering, and what many Republicans seem all too willing to accept, is an explanation of the world that strives to maintain a thorough, almost childlike simplicity. Against the individual and his will, there are no worthy challengers; no problem is so great that it must be managed rather than solved.

So instead of getting into the details of parliamentary rules or international negotiations or (heaven help us) nuclear fission, Trump tells his fans not to worry. Just give him the power to make America great again and — poof! — he’ll go get the job done. If you’re interested in the subjects Trump dismisses so nonchalantly, it’s not exactly persuasive. But if you think that’s all just bullshit from a sniveling and “low-energy” elite, it’s catnip.

To put it more simply, the people who went to Wednesday’s “Stop the Iran Deal Rally” believe the world works in a way I (and most non-supporters of Trump, including many on the right) don’t. They think of government as if it were an occupying force. If it would only get out of the way, then “real Americans” could get back to their normal business. Government is easy. It doesn’t need serious, informed people to be well-run.

It’s a fantasy, of course; an analysis worthy of a 6-year-old. But in a country undergoing massive demographic changes and rising levels of inequality, folks who would otherwise make a point of ignoring politics are going to be looking for answers — and drawn to someone like Trump. And as we saw at the rally, this kind of defiant simplicity can, in its gonzo way, be thrilling, even fun.

Check back in a few months' time, though. By then, I’m guessing, Colbert will still be funny. But the Donald Trump show, if it’s still rolling? Not so much.