My first date as a bald woman: Romance with trichotillomania 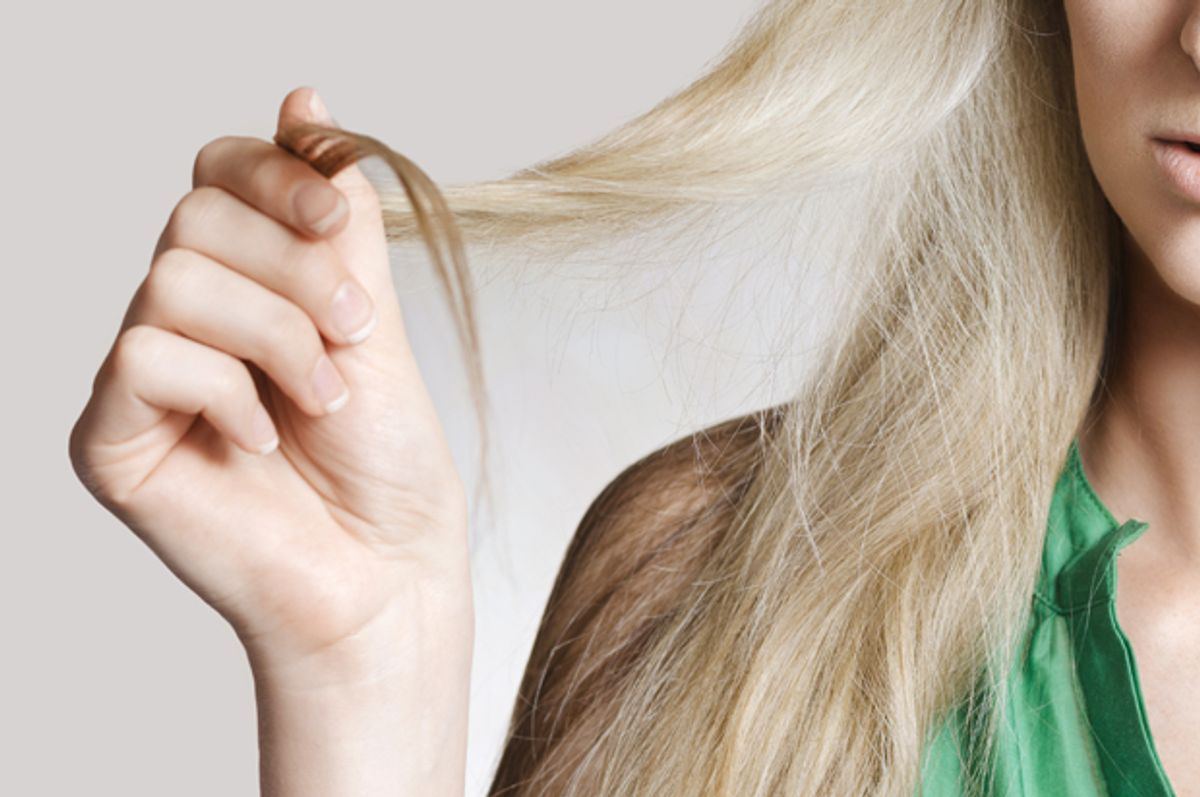 I faced the mirror in a restaurant bathroom and began tugging on my wig to ensure the bangs fell straight across my forehead before I met my date. I patted down any strays as the woman standing next to me flashed sympathy eyes. This wasn’t the first time I received this look; whenever I shift my wig, people assume I am battling cancer. But I am not. I suffer from trichotillomania.

Trichotillomania is a disorder in which I feel the constant need to pull out my hair. This need started when I was a teenager and never stopped. I tried everything: wearing rubber gloves, hats and heavy hand cream. Every day I feel a burning sensation on the top of my head and pulling offers the only relief. Two years ago I decided to shave it all off to rid myself of the problem. I thought this would help, but instead I pulled out strands from my wig.

So there I stood, looking in the bathroom mirror with my fingers fluttering over the wig’s strands, making last-minute adjustments to cover up any evidence. It was a cute wig, a white-blonde bob with brown roots to make it look natural. But because I had ripped part of it out, discerning eyes could tell it was, indeed, fake hair.

I felt nervous. It was my first date as a bald woman and I gingerly perched myself on a chair at the restaurant’s bar, running my hands up and down a glass of Diet Coke. In uneasy situations, I tend to pull more and thus I concentrated on keeping my hands occupied, as I didn’t want all the work on my wig to feel superfluous.

I have always heard comments about the unattractiveness of toupees—the consensus among women was they would rather see baldness than an obvious attempt to hide it. Did these feelings translate to men as well? I figured on a first date no man would want to arrive and see a bald girl.

But what would happen if things progressed? I would need to “show” my secret at some point and pictured only a disappointed face staring at the minuscule brown hairs sticking straight up all over my head. I could wait and not date until I experienced a little growth, but I felt lonely, and the desire to date was greater than the potential embarrassment of displaying my baldness. Because of this, I created an online profile and began communicating with potential matches.

When my date showed, he thrust his head back. “You didn’t look so blonde in your photos,” he said, making his first comment to me about my (unknown to him) wig.

“It’s the same hair as in my pictures.” My friend snapped shots of me in my wig to not surprise any date by using photos pre-shave. It appeared this strategy didn’t work and I made a mental note to switch these photos out with new ones taken in better light.

I studied his face for a moment. “You look shaken up.”

“No, not at all. I expected someone with darker hair is all. It looks good. I really like blondes. I’m pleasantly surprised to find you with such blonde hair.”

The statement was both a compliment and a sting. I felt tremendous guilt for presenting this façade, especially when our introductory interaction centered on the one thing I hated most about myself: my hair.

As the date developed, the chemistry between us felt strong and he touched my knee in a casual fashion while we chatted and then moved his hands up to my hair (wig) as men do when playfully flirting. I noticed his face transformed from amusement to confused when he felt the straw-like texture of the strands.

“I have a confession,” I said, feeling tense. “This isn’t my real hair. I am wearing a wig.”

He shot back, “Why?” Then I noticed the sympathetic eyes again, and I felt even guiltier.

“I don’t have cancer,” I said with a flat tone. I didn’t know if explaining trichotillomania felt apropos for a first date. Everyone I tell thinks it is a curable addiction. It is not.

But I decided to say something. “I have this thing where I pull out my hair. It’s bizarre, I know.”

“It is a weird thing, I guess,” he said, shrugging his shoulders. I took this to mean he was OK with it and I found myself sitting up straighter, developing more confidence in this date.

But his tone quickly changed and he became curt, flagging down the bartender for the bill with demonstrable energy—evidence our date met its demise.

I never heard from him again.

I remember wearing my wig while attending an outdoor concert with a friend; a good-looking, tall guy approached me and smiled. I smiled back. He moved to the side of me and started a simple, charming conversation asking me about the band. “I noticed you earlier in the evening,” he said. I blushed. Our attraction was palpable and I felt my body pulsate.

“You are beautiful,” he said with a sheepish look on his face I found quite endearing. Those three words lingered in the air; I couldn’t remember the last time a man had said he found me pretty.

He paused. “I really like blondes. Your hair is so adorable. I thought, I have to go talk to that girl.”

My shoulders and face fell. Why was it my hair that drew him to me? Couldn’t he say something such as “I like tall women?” (I’m 6 feet tall.) Or even something more pedestrian like, “You have a nice smile.” It made me realize how much hair matters to men--and I didn’t have any.

Our flirtation didn’t go anywhere. He disappeared into the crowd and I clung to the first compliment he said to me that night, “You are beautiful.” I decided to put a period at the end of that sentence and not think about what he said after it.

I met a few more men for dates, always wearing my wig. I never mentioned it was a wig, which didn’t matter, as the first dates never turned into second ones.

One night I stood in front of the bathroom mirror and removed my wig. I took the ubiquitous bathroom selfie, but not to show off my fine abs or sexy cleavage; instead I wanted to capture this moment when I felt at my lowest, appearance-wise, to try to keep me from pulling, like keeping a rejection letter to serve as a motivator to accomplish something better.

When my hair started growing back and I worked hard at not pulling it out, I decided to start dating without the wig—despite my hair’s short length. I felt antsy but happier, as I would no longer meet someone with what I considered a lie.

I met my first date sans wig at a coffeehouse; his hair was considerably longer than mine, brushing the top of his shoulders. His first words to me were about my hair.

“It’s so short and dark,” he said, emphasizing the word “so.”

“Are you surprised?” I had updated my profile pictures to reflect my new look.

“I’ve never dated a girl with hair shorter than mine. Maybe I didn’t look at your photos close enough.”

Our conversation once again began with the subject of hair, and I once again felt let down. Without mentioning trichotillomania, I told him I used to have longer hair and whipped out my phone to show him a photo from a few years ago of me with long, bottle-blonde California sun-bleached hair—back when I only pulled out my hair in the back of my head, making it unnoticeable in photos.

He peered down at the photo. “You’re hotter as a blonde.”

After such rudeness I sat on my hands to avoid pulling my hair out, my go-to response when I feel uncomfortable. I internalized his comment, ended the date and went home and cried—and then pulled.

I am still single and my hair has grown out a bit, but I create new bald patches each day. I think I will have many more evenings standing in front of a mirror carefully moving around the strands to cover the bald spots before meeting my next date. But I will keep trying, and I hope one day someone notices something other than my hair first.

Jennifer Purdie is a Southern California-based writer with essays appearing in The Los Angeles Times, The Washington Post, Refinery29 and others. You can follow her on Twitter @jenpurdie.