The existential genius of Lana Del Rey: Performing yearning self-destruction as meaningful as Don Draper's — and just as uniquely American

In her sad and glamorous world, beauty is brutal and America is filled with dangerous, deceptive dreams 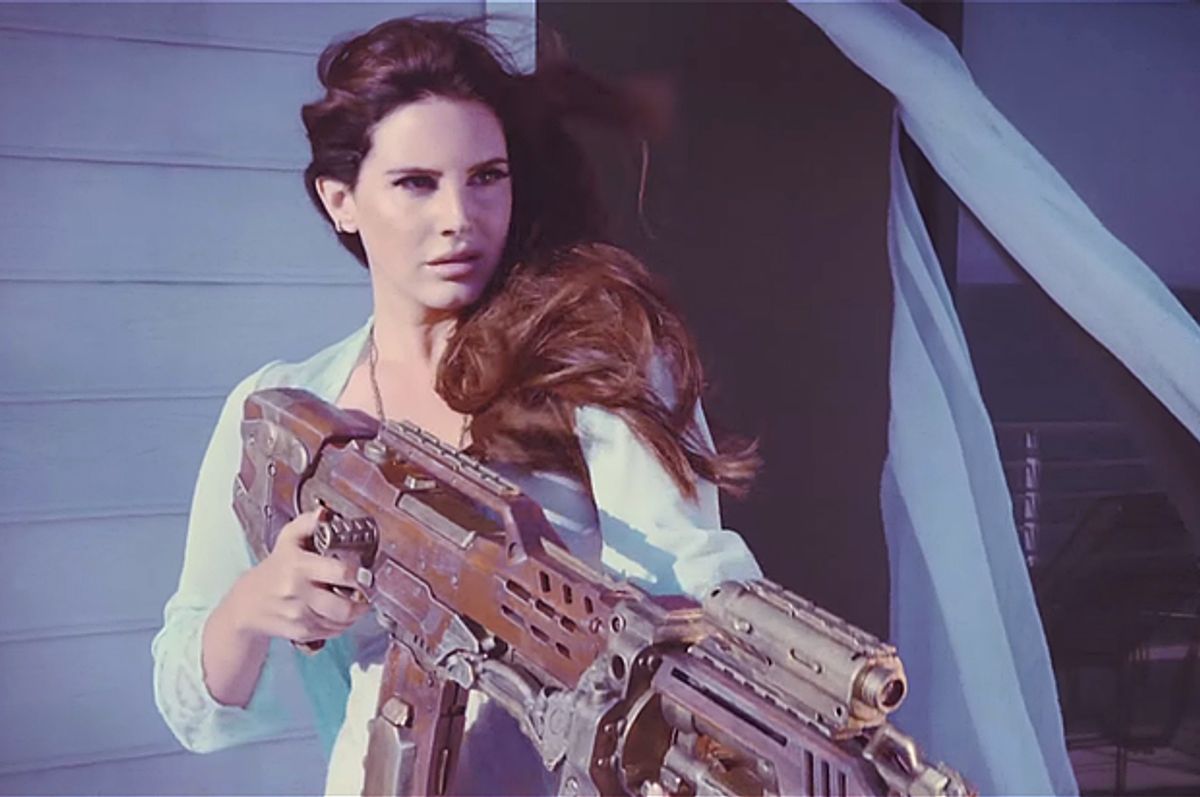 In the 1920s Lev Kuleshov edited several films, which alternated between the image of a blank-faced man and the image of an object he was supposedly responding to. Viewers interpreted the emotion on the man to be strikingly different depending on what the scene cut to; viewers assumed the cut to the bowl of soup showed the man was hungry, while the effect of seeing the deadpan man juxtaposed with an image of a beautiful woman implied lust. While viewers attributed the emotional impact of these scenes to the acting of the man in the photo, the effect came from the alternating images themselves. When we see powerful images, we are simultaneously projecting meaning onto that succession of images in order to construct a narrative.

Lana Del Rey, whose third studio album, “Honeymoon” comes out Sept. 18, is a master of The Kuleshov effect. Her early music videos were edited as a series of montages of old video footage paired with images of herself, often dressed up and looking alternately sad, wistful, joyful and longing. In “Video Games,” which propelled her to stardom, we see the iconography that Del Rey is fascinated with—rows of palm trees, American flags, kids playing games, clips of beautiful women, the open road. In later videos we see Del Rey investigating these same images—in “Ride” she plays a beautiful woman searching for meaning in a “Buttweiser” T-Shirt wrapped in an American flag. In “Blue Jeans” she exudes Hollywood glamour with her perfectly coifed hair and white bathing suit, as she looks longingly at beautiful man in a swimming pool who turns into a crocodile. In “Born to Die” we see jean cutoffs, red sneakers, tattoos, drugs and violence paired with images of refinement and royalty—long dresses, tigers, expansive beautiful rooms.

In her more recent “High by the Beach,” we see Del Rey in silk pajamas wander around a giant, empty beach house, and take out a paparazzi helicopter with a gigantic machine gun.

Del Rey is obsessed with ironic representations of American nostalgia. In the world of Del Rey our desires are dangerous and the images of classic Americana are meant to inspire disgust as much as longing. In the worlds of “Born to Die” and “Ultraviolence,” beauty is brutal and America is filled with dangerous, deceptive dreams. Del Rey plays a host of female characters—she is an ingénue and femme fatale, girl next door and glamorous beauty queen. She is always addicted to loving that which is just out of reach. The world of Del Rey is complicated, joyful, dirty, glamorous and sad. It’s also darkly humorous, from the polarizing—“My pussy tastes like Pepsi Cola”—to the playful (“Yeah, my boyfriend’s pretty cool. But he’s not as cool as me”).

In a less sexist world, Del Rey would be compared to an artist like David Lynch, who is similarly interested in all manner of human perversions. Or her persona would be seen as similar to the trajectory of Don Draper—empty, longing, obsessed with sex, and seeking redemption.

In our world, Lana Del Rey’s music may be lauded, but she is still presented as merely pretty and sad, the kind of artist who doesn’t give good-girl answers when asked the question du jour about feminism and what it means to her. In a 2014 interview with Fader she balked at the question:

“For me, the issue of feminism is just not an interesting concept,” Lana started off when asked about her opinion on the matter. “I’m more interested in, you know, SpaceX and Tesla, what’s going to happen with our intergalactic possibilities. Whenever people bring up feminism, I’m like, god. I’m just not really that interested.”

As someone for whom feminism is deeply important, I actually found Del Rey’s answer to the question to be refreshing. Why do we insist on asking female artists for their stock answer to this question? Why don’t we ask them about space? The future? Robotics? The question of whether or not a female artist identifies as a feminist has supplanted other far more complex and interesting questions we could be asking female artists today. Moreover, much of hostility that some leveraged against Lana Del Rey for giving a flippant answer was overtly sexist. In her memoir “Girl In a Band,” Sonic Youth’s Kim Gordon said of Del Rey:

“Today we have someone like Lana Del Rey, who doesn’t even know what feminism is, who believes women can do whatever they want, which, in her world, tilts toward self-destruction, whether it’s sleeping with gross old men or a transient biker queen. Equal pay and equal rights would be nice. Naturally, it's just a persona."

Likewise, Ms. Magazine panned Del Rey’s passivity, “Del Rey not only perpetuates her helpless, damsel-in-distress image, but verbally promotes violence against women. If we as a society accept the disempowered form of femininity that Del Rey embodies, young women are truly in trouble.”

If male self-destruction is seen as opening up meaningful questions about great existential truths—Don’s alcohol binges in “Mad Men,” Walter White's coming to terms with his own mortality in “Breaking Bad,” female self-destruction is still perceived as self-indulgent. The female depressive is seen as self-involved and attention seeking, empty-headed and silly. Seeking meaning in sex and drugs is seen as morally weighty when a man does it, but when a women grapples with nihilism, it’s still perceived as merely acting out for male attention.

Indeed, Del Rey’s use of iconography, including her own image, is generally flattened and reduced to the façade, which is why so many people were quick to see Taylor Swift’s video for “Wildest Dreams” as Lana Del Rey-esque. But while Swift’s video features many of the accoutrements of a Del Rey enterprise—a fixation on handsome men, an old Hollywood nostalgia, a penchant for dark curls and red lips—it lacks the substance of Del Rey’s body of work, which offers a more nuanced and complicated look at human longing and desire.

Del Rey recently clarified her thoughts on feminism when speaking with James Franco, explaining that, “The luxury we have as a younger generation is being able to figure out where we want to go from here, which is why I’ve said things like, ‘I don’t focus on feminism, I focus on the future.” I hope that in the future we get to spend more time focusing on Del Rey’s interest in SpaceX, her background in philosophy, and her love of literature, more so than the broad, general sound-bite questions about feminism that female artists are now required to answer, in addition to questions about what dresses they are wearing and what shade of lipstick they prefer. While it has been amazing to see a tremendous talent like Beyoncé champion the feminist label, it’s unfair to suggest that all female artists should be concerned with standing in front of giant glowing feminist signs.

As an artist Del Rey is invested in big existential questions that men have grappled with for centuries—seeking meaning through sex and drugs and art and poetry and the open road. The tendency to underestimate Del Rey, to assume she’s not aware of her provocative, uncomfortable, sometimes violent imagery, tells us something important about our own assumptions about what beautiful women are supposed to feel and think. It shows how in 2015 the Kuleshov effect still renders the blank-faced beautiful woman as object, rather than agent, even when she is the one constructing that image for herself.