"Back at square one": Defiant Kim Davis returned to work Monday and declared that she will continue not to do her job

She will allow her clerks to issue licenses, but will refuse to sign off on them, making them legally invalid 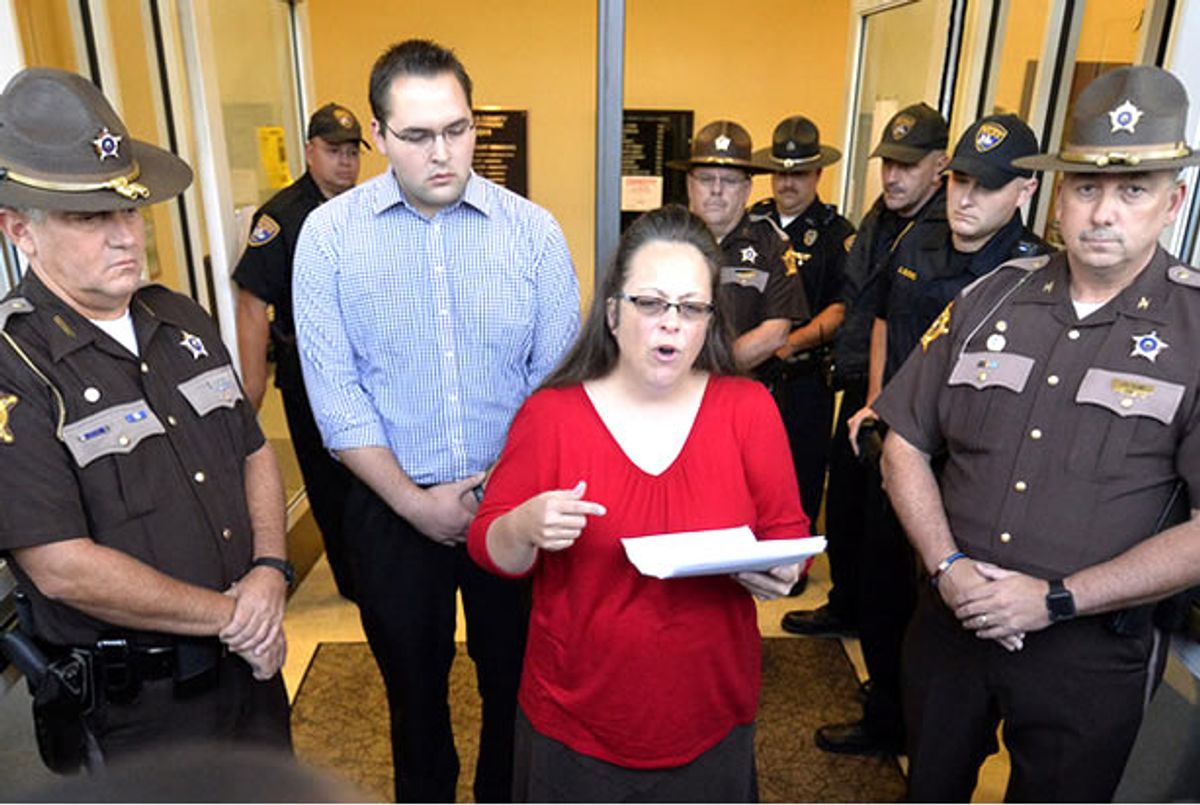 Rowan County, Kentucky Clerk Kim Davis returned to work Monday morning and immediately held a press conference in which she announced that she will continue not to perform the duties required of a county clerk.

"I am here before you this morning with a seemingly impossible choice, which I do not wish on any of my fellow Americans," Davis said, before listing the alternatives. "My conscience or my freedom. My conscience or my ability to serve the people that I love. Obey God or a directive that forces me to disobey God."

She took a stance that can be best described as one advised by lawyers -- not openly in defiance of the terms of her release, but not fully in compliance with them either. "Effective immediately," she said, "and until an accommodation is provided, by those with the authority to provide it, any marriage license issued by my office will not be issued or authorized by me."

"Any unauthorized license that they issue will not have my name, my title or my authority on it. Instead, the license will state that they are issued pursuant to a federal court order."

Despite the fact that while she was imprisoned, all of the clerks who weren't the fruit of her loin issued legally valid marriage certificates -- and despite the fact that one of those clerks told the Kentucky Trial Court Review that Davis "terrorized" her underlings and wasn't supported by them at all -- Davis claimed this morning that "I love my deputy clerks and I hate that they have been caught in the middle. If any of them feels that they must issue an unauthorized license to avoid being thrown in jail, I understand their tough choice and I will take no action against them."

According to one of her lawyers, Liberty Counsel founder Mat Staver, at this point Kim Davis and the state of Kentucky "are back at square one." She refuses to resign her $80,000 per year clerkship, and even if the state legislature were in session -- it won't return until January -- she possesses enough support to prevent an impeachment.

On C-SPAN Sunday, Staver added to the illustrious list of Americans Davis is said to resemble, saying that "if we told Abraham Lincoln, ‘Abraham Lincoln, you should just go along with the Dred Scott decision. After all, it is what the racist Chief Justice Taney wrote and it’s the law of the land.’ And yet, Lincoln advocated something different than that and unfortunately because of that Dred Scott decision we had to fight a Civil War. It was a terrible time in our history."

Of course, Judge David Bunning could order federal marshals to take her into custody again, but legal experts consulted by NBC News claim that it's more likely he orders her to return to court for another hearing in which she must explain why she continues to violate both his initial order and the terms of her release.