He noted they'll always disagree on some issues, but that wealth distribution shouldn't be one of them 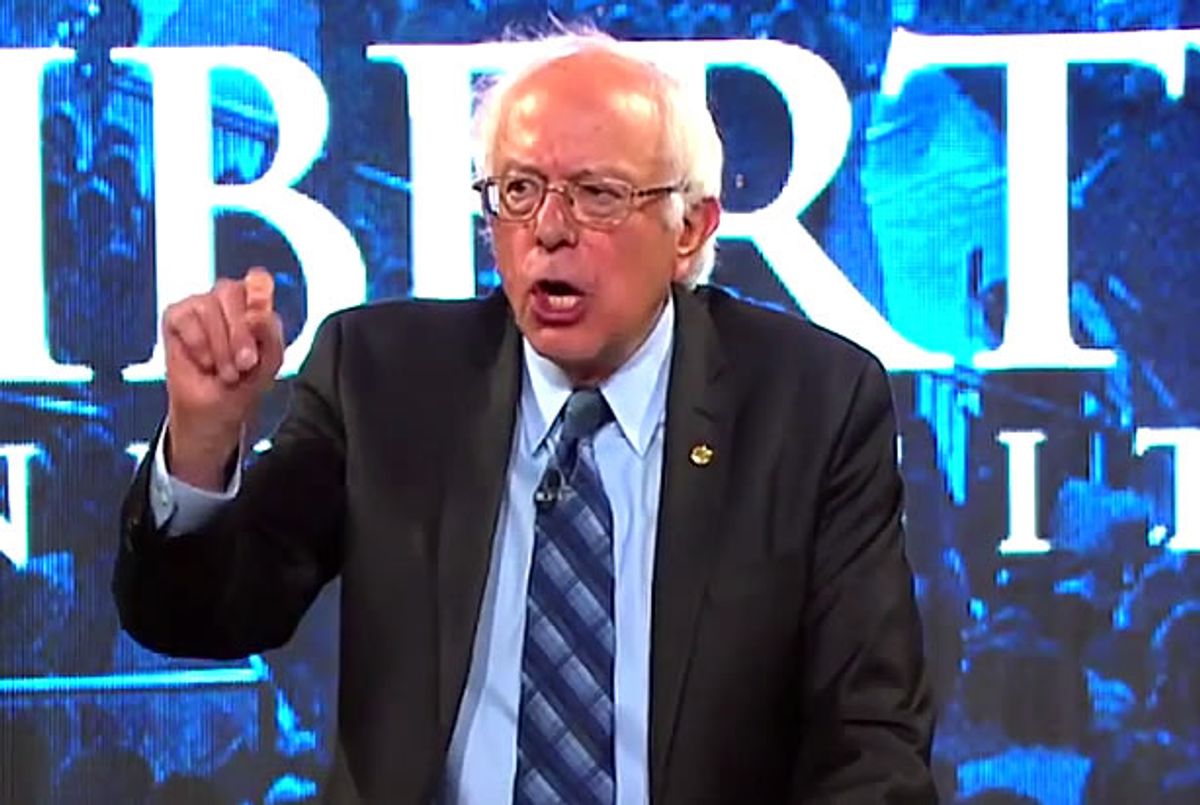 Democratic presidential candidate Bernie Sanders spoke at Liberty University, the conservative Christian institution founded by the Reverend Jerry Falwell, and he wasted no time in making it clear that on issues like abortion and same-sex marriage, they will always "disagree" -- but that there's one issue on which he believes they can find some common ground.

"Let me respectfully suggest that there are other issues out there that are of enormous consequence to our country and in fact to the entire world that maybe, just maybe, we do not disagree on," he said. "Maybe, just maybe, we can try to work together in trying to resolve them." The issue in question is one familiar to anyone following Sanders' campaign -- the concentration of wealth among "the top 1 percent of the 1 percent."

"It would be hard to make the case that we are a just society or anything resembling a just society today," he said. "In the United States of America today, there is massive injustice in terms of income and wealth inequality. Injustice is rampant."

Many of these points were met with applause from the largely conservative audience during the speech itself -- especially when he quoted directly from the Bible -- but the relationship became a little strained during the question-and-answer session. One student asked about the Vermont senator's statements about children being the most vulnerable members of society, and how he would reconcile that with the belief that "children in the womb need our protection even more."

Sanders replied that "this is an area where we disagree. I do understand and I do believe that it is improper for the United States government or for state government to tell every woman in this country the very painful and difficult choice that she has to make on that issue." He elaborated that "in the Republican budget that passed some months ago [the GOP] cut billions of dollars in nutrition programs, including money for the WIC program, which goes to low income pregnant women and their babies. And to add insult to injury in that budget, the Republicans provided over $250 billion over a 10-year period in tax breaks to the top two tenths of one percent."

"I don't think that's a moral budget," he said.

Sanders also complimented his hosts by noting that "you are a school which, as all of us in our own way, tries to understand the meaning of morality -- what does it mean to live a moral life? -- and you try to understand in this very complicated modern world that we live in what the words of the Bible mean in today's society."

"I applaud you for trying to achieve those goals," he said.

Watch the entire speech below via the Washington Post.