Kiernan Shipka on her horror flick "February" and those Sally Draper "Mad Men" spinoff rumors: "It’s not a thing" 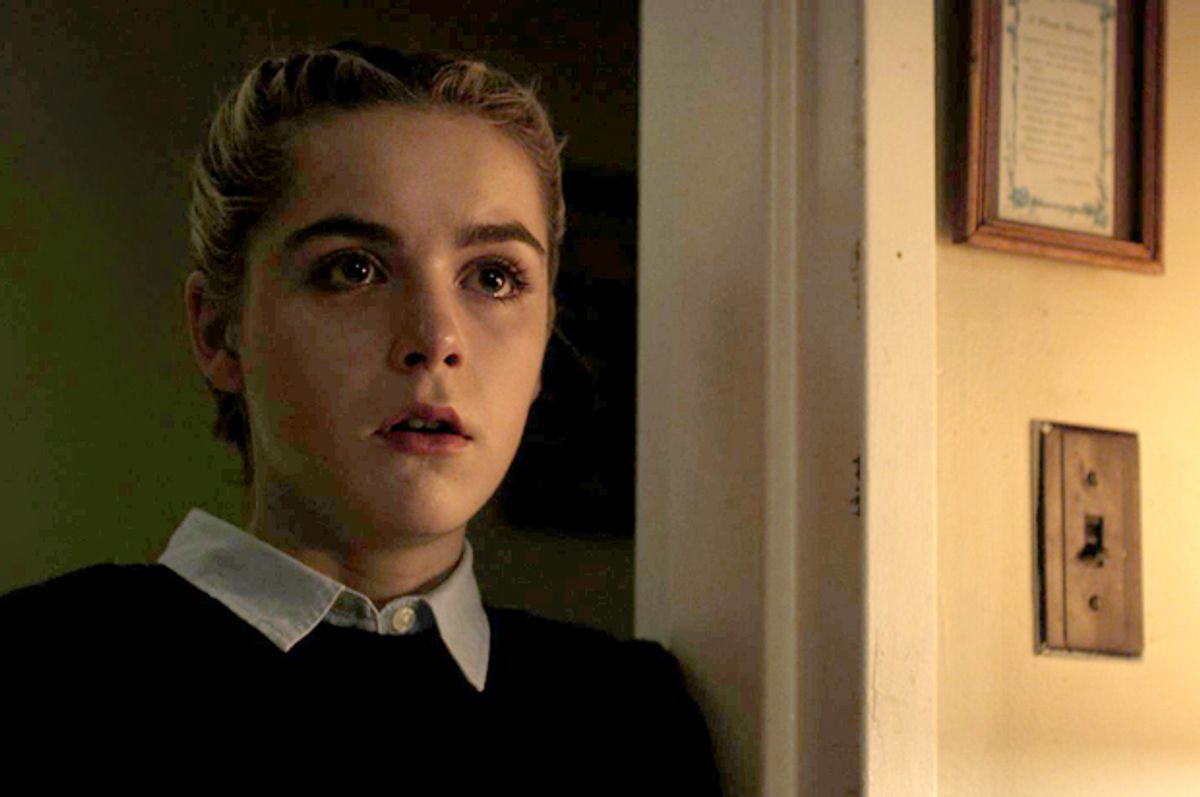 Of all of “Mad Men’s” breakout stars, Kiernan Shipka may have been Matthew Weiner’s greatest discovery. Beginning her portrayal of Sally Draper when she was just eight years old, viewers watched Shipka age before their eyes, becoming one of the most gifted young actresses working today and turning Sally into one of the show’s most rich and compelling characters.

Naturally, “Mad Men” fans are excited to see what Shipka will do next, and I’m happy to report that her new Toronto Film Festival debut, “February” — an indie horror flick made by first-time director Osgood Perkins, son of "Psycho" star Anthony Perkins — is an instant classic (although I warn you, don't expect to see Sally Draper onscreen).

The film centers on three young girls — Joan (Emma Roberts), Kat (Shipka) and Rose (Lucy Boynton), whose lives converge with shocking violence in the frozen February landscape. Kat and Rose are students at a prestigious rural boarding school, left alone for the winter holidays when their parents don't show up to come get them. As Kat becomes possessed by some unseen evil, the mysterious Joan -- with few possessions and haunted eyes -- begins a journey towards the school.

I can’t say too much more without giving things away, but suffice to say, the film is a terrifying, melancholic, beautifully-shot film that evokes the artful old-school horror of movies like “Rosemary’s Baby” and grapples with complex ideas about grief, adolescence and the loss of one’s parents (it was inspired by the tragic deaths of the director's own parents, his father to AIDS and his mother in the 9/11 attacks, less than a decade apart).

We spoke to the 15-year-old Shipka briefly at TIFF to ask her about horror films, letting go of Sally Draper, and what she's up to next.

The film was so terrifying. What compelled you to want to make a horror movie?

It was really the content, I loved the script and I loved what Oz [directer Osgood Perkins] had in mind. He had this great vision, he wanted it to be really artful and beautifully shot and I was just super down with his ideas and the character and the story. So I was really excited about that.

I know that Oz was going for a sort of old school horror vibe — what sort of inspirations and influences did he give you to prepare?

To prep he gave me "Rosemary’s Baby," "The Shining," the original "Carrie" and "Eraserhead," so kind of fun interesting films with a lot of depth, films that are really about the people with these scary really cool elements that kind of element.

Are you brave enough to you watch them alone?

I don’t know if I’m that bold. I cant remember if I’ve ever watched a horror movie alone, but certainly I’d hope there’d be other people at least in other rooms. I would never watch it in my house alone. That would be one step too far.

The project is very female-centric: All three of the main characters are young women. Is it important to you at this stage to take on projects that have a strong female presence onscreen?

Absolutely. Growing up on a show like "Mad Men" that had so many strong female characters, I was so influenced by that and appreciate that so much.

What else do you look for in projects at this stage?

I think for me what definitely drives it is the other people, like, oh, I would love to work with this person. Strong material and depth and emotion and layers, and that can definitely be there in comedy, I love comedy too. It’s kind of just finding a balance. I mean, I just love acting.

I have a few things that I'll be working on next year but for now I'm just focusing on school.

Not to spoil anything, but your character is in some very graphic, violent scenes. Can you talk a bit about the experience of shooting those?

The set remained very calm and really chill and that was really nice to sort of be able to cut the scene and then have a nice environment to be in, but it was really fun, the whole experience was great. I’d never really played a character like this. It was kind of a treat to be able to do that.

Have you been keeping in touch with the Mad Men cast and with Matthew Weiner?

Yeah! I ran into Elisabeth Moss twice today. She’s around here. And I’m excited to see anyone at the Emmys. I think Matthew was here too, it’s so funny, it’s like we’re all coming to Toronto at the same time. I have kept in touch with Matt and we’ve chatted a couple of times and can’t wait to see them all again.

I feel like there will be a lot of “Mad Men” fans who go into “February” and expect Sally Draper and then see a lot of shocking things and you’re like — not Sally.

Are you still attached to that character or are you ready to let her go and stop being asked about her?

I think it’s one of those things where she will always be a real big impact on my life because she was such a strong character and such an amazing one, and I just feel so lucky to have played her. And I miss playing her too. Because I really do love the character and loved to get the opportunity to get to play her for such a long period of time, because that’s not something you get to do a lot, even if you are an actor. So no, I really do miss the show. Absolutely.

Do you ever think about how Sally is doing -- how she would be coping with Betty’s death, for example?

Obviously loss is an extraordinary hard thing and it affects everyone, but I think that the character is such a strong-willed character that while dealing with whatever it is that she’s dealing with in her life I think she could also really make something so great of herself because she’s really smart and I can see her being really successful.

Any more word on this much-discussed Sally sequel?

Oh, I don’t think there is any word. I’m definitely not not down. I mean [laughs] — It’s not a thing.