An odious wingnut gets his comeuppance: How one of the world's most boorish conservatives just lost his job

Finished by the same chaotic system that made him, Tony Abbott leaves a sexist, anti-LGBT, climate-denying legacy 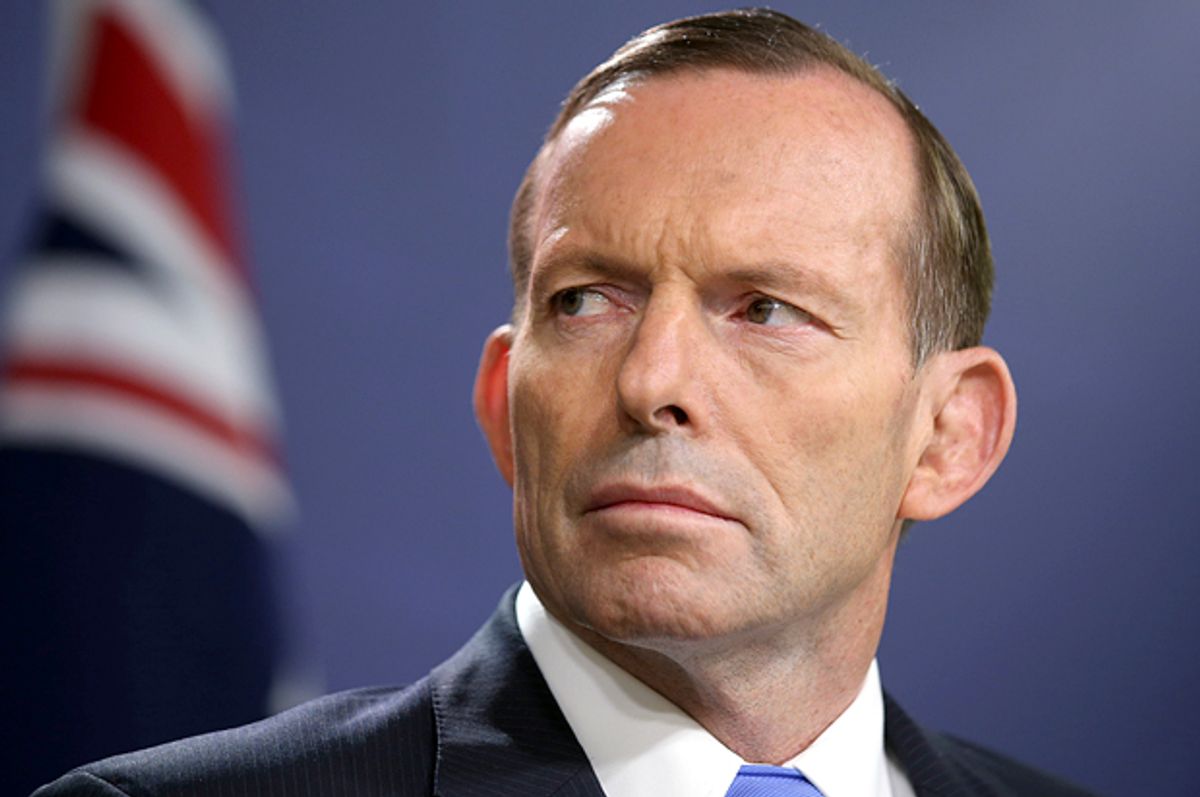 There's lots of chatter these days, as we watch Donald Trump go from strength to strength in the Republican primary, about how turbulent and crazy American political culture is becoming. But for a taste of what a truly ruthless and deranged system looks like, cast your eye southward to Australia.

Australia will now have its fifth prime minister since 2007, thanks to its politicians' seemingly unquenchable addiction to overthrowing their leaders.

On Monday, Malcolm Turnbull ousted Prime Minister Tony Abbott as leader of the Liberal Party (which, despite its name, is Australia's main conservative party). Abbott only became leader after he overthrew Turnbull himself in 2009, when the Liberals were in opposition.

After that coup, Abbott faced the Labor Party's Kevin Rudd, who had been the prime minister since 2007. But this matchup was short-lived, because Rudd was knifed by his deputy, Julia Gillard, in 2010, after the party got nervous that Rudd wasn't up to the job.

Gillard then called an election and oversaw a shaky minority government for a couple of years until she was dethroned by a vengeful Rudd. He then took Labor into yet another election in 2013, which it lost to Abbott's Liberals. (If you want a deeper look at Labor's astonishing internecine warfare, watch the fascinating ABC documentary "The Killing Season.")

Abbott pledged an end to the turmoil that had sent voters rushing into his arms. So much for that. Monday was actually the second time members of his party tried to oust him this year. He's now had the briefest term in office since the 1970s.

Overall, none of the people who have led Australia since 2007 served out even one full three-year term in government.

Over and over again, the pattern is the same: a leader takes over, promises to right the ship, passes some bills, but then trouble brews. The polls start going south. Backroom hacks get nervous. Seekers of the throne start making noises about how voters would like them more than the current leader. Then, the coup. Unlike, say, Britain, where the Conservative Party has been much more comfortable with regicide than the Labour Party, Australian politicians across the spectrum enthusiastically send their leaders to the scaffold.

Abbott made himself particularly easy to dump. A hard-right jock with a history of embarrassing gaffes and boorish, retrograde comments about women and LGBT people, Abbott's government was noteworthy mostly for its grim air of conservative thuggery. He reversed Labor laws taxing the powerful mining industry, ripped up pledges on climate change and outdid an already-harsh Labor policy on asylum seekers, sending Navy boats to force migrants to turn back before they reached Australia's shores and detaining others in hellish detention centers. (The New York Times recently called that policy "inhumane, of dubious legality and strikingly at odds with the country’s tradition of welcoming people fleeing persecution and war.) He also refused to call a parliamentary vote on same-sex marriage, causing a split within his party.

Little of this helped Abbott's popularity; he became the most unpopular prime minister in decades. In his most cartoonish blunder, Abbott, an ardent defender of the monarchy which still technically rules his country from London, decided to grant a knighthood to Prince Philip, the queen’s husband. The nation howled at this, turning its nose up at such a grovelling gesture. The cabinet wasn't consulted. Abbott imperiously called it a "captain's pick."

Well, now the captain's crew has thrown him off the ship. Turnbull was unable to conceal his glee at a late-night press conference on Monday. He promised to lead the Liberals into the next election.

Standing next to him was his deputy, Julie Bishop. She had been his deputy back when Abbott ousted him in 2009, and remained in that post under Abbott until Monday, when she demanded that he step aside for Turnbull. If history is any guide, it might not be too long before Bishop starts craving the crown that's currently wobbling on top of Turnbull's head.