Liam Hemsworth on the end of "Hunger Games," the "Independence Day" reboot and collaborating with his brother Chris: "We'll probably only get one chance to do it" 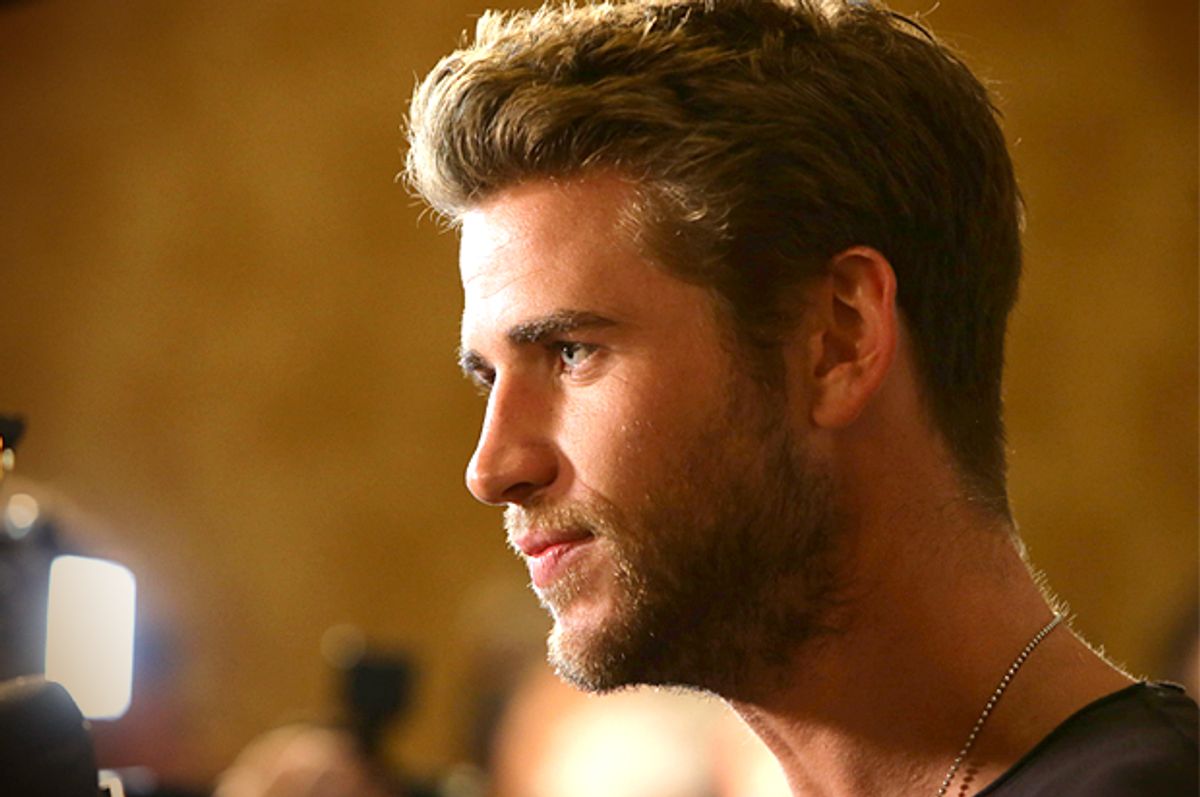 In just a few years, Liam Hemsworth has gone from little-known Aussie TV actor to one of those megastar Hollywood heartthrobs that seems to have been chiseled from a different sort of raw material than the rest of us (along with his "Thor" star brother Chris, he at least makes you wonder what sort of superhuman nutrients they put in the water down under). And this fall, the 25-year-old actor will celebrate the end of “The Hunger Games” franchise by plunging feet-first into another mega-franchise: Roland Emmerich's “Independence Day” reboot, which he takes over from former leading man Will Smith.

But the Aussie star is more than a one-note action hero, as evidenced by his investment in smaller projects — like “The Dressmaker,” an offbeat Australian revenge comedy opposite Kate Winslet, which premiered at TIFF last night. He’s also charmingly down-to-earth, with none of the snoot or swagger that you’d expect from a guy who has his very own team of fans (Team Gale!), while being the brother of the Lord of Asgard to boot.

Yesterday, a small group of journalists sat down with Hemsworth to ask him about his upcoming projects, playing opposite Kate Winslet and J-Law, and his first film shot in his native Aussie accent. Here are seven things we learned:

His new film, “The Dressmaker,” is a very personal project to him:

“I was first interested in my character because it really reminded me of my own dad and grandpa,” Hemsworth says of his character, Teddy, a good-humored country boy who falls in love with Kate Winslet’s titular dressmaker Tilly Dunnage. “I just really knew who this guy was, his sense of humor and his way of life.”

While he did a little bit of research about the ‘50s to prepare for the role, most of his preparation involved looking at his grandfather. “The way he dressed was the way I dressed, and the way he spoke was the way I spoke. I really tried to put as much of my grandpa into this character as I could. He was my research, just remembering his mannerisms and things like that,” he added.

Shooting in his native Aussie accent allowed him a new measure of freedom on-set:

“I've never done an Australian film before,” Hemsworth explained. “I did a lot of Australian TV when I first started, and did a film in Australia when I was about eighteen, but it wasn't in an Australian accent. So this was my first film in my own accent, which I was really excited to do. I was able to be more free with it than in an American accent. I've been doing an American accent for seven years, have done a lot of work with accent coaches. But doing something like this, where I knew who this character was, and I understood everything about this guy, I just felt very comfortable on-set and very free.”

He was a bit nervous about romancing older actress Kate Winslet, but it worked out just fine (and Winslet agrees!):

“It was something I was sort of worried about in the beginning,” Hemsworth said about romancing the 39-year-old Winslet in "The Dressmaker." “I felt like I was possibly too young to play this part because in this film we’re seen as the same age, around the same age… But onscreen — Kate is such a beautiful woman and I have a beard in the film so I look quite a bit older, so I don’t think it’s an issue at all." As he put it, with a laugh: "she looks really young and I look weathered and old."

He sees similarities between Jennifer Lawrence and his “Dressmaker” costar Kate Winslet:

Asked about whether his “Dressmaker” co-star Kate Winslet shares anything with his “Hunger Games” love interest Jennifer Lawrence, he acknowledged that the two leading ladies have a lot of similarities. “They’re both extremely talented people in this industry," he said. "Both possess that spunk that you're talking about. They can come onto a set and just change the mood of everyone: they both have a larger-than-life energy.”

The ending of “Hunger Games” is bittersweet:

After an overwhelmingly successful three year run, the final "Hunger Games" installment hits theaters this November, and Hemsworth says the ending brings mixed feelings. “It was bittersweet for all of us on the last day of filming," he said. "There was a realization that we all came to that we didn't have another film to come back to. And that was sad, because we've established such close relationships with each other, and experienced an important part of our lives together. We'll always hold onto that. I'm looking forward to the last press tour. I'm really proud of the last film, it's possibly the best one. It ties up all the loose ends. It's not quite the happiest ending for everyone.”

He was a fan of "Independence Day" long before he got signed to star in the reboot:

Hemsworth was six years old when the original film came out, back in 1996. “We had a VHS copy at my house with a little hologram on it. I used to carry it around,” Hemsworth recalls. Now, he’ll take over the leading role from Will Smith, in Roland Emmerich’s reboot due out next year. "I just finished shooting two weeks ago. 'Independence Day: Resurgence,' it's called. Its a follow-on of the previous story twenty years later with a lot of the original cast. It’s fun. Just the chance to work with Jeff Goldblum, Bill Pullman, and Roland Emmerich, who did the first one, who I've been a fan of for a long time – he's the kind of director who pioneered this genre, the world ending on a huge scale."

We might get to see a Hemsworth brothers collaboration one day, if we're lucky:

“We've always talked about it,” said Hemsworth, when asked about whether he would ever make a film with his “Thor” star brother Chris. “Whether it's a big blockbuster film or an independent artsy film, either way, it has to be something great, something with an amazing director and a great story. Because we'll probably only get one chance to do it — I don't know how many films you can make with your brother. But if the right project comes along and all the stars are aligned, we'd love to work together.”