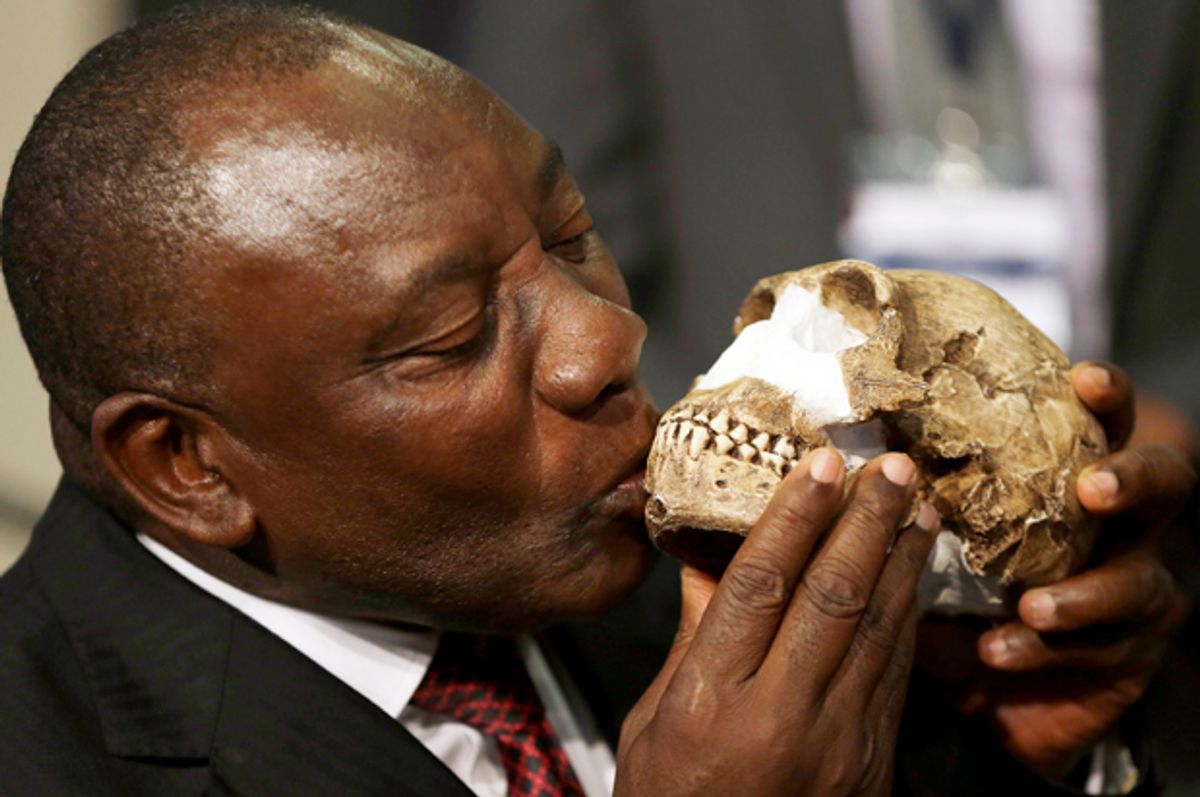 The discovery in South Africa of an inaccessible subterranean chamber filled with the broken bones of ancient human relatives — nobody yet knows quite how ancient — is exciting news indeed, and not only for specialists in paleoanthropology.  As I emphasize in my recent book "The Strange Case of the Rickety Cossack, and Other Cautionary Tales From Human Evolution," the way in which we view the process by which we became the very unusual creatures we human beings are deeply affects both our view of ourselves, and our ideas about what we can become.

At one time we were taught that the story of human evolution was a simple one of steady improvement over the eons. With each passing generation natural selection gradually shaped our ancestral lineage, to produce an ultimately perfected product. The result was that, as each new fossil human relative was discovered, it was assigned to its place in a great modifying chain of ancestors running through time — hence the tendency for the popular press to eagerly hail every significant new fossil as “the missing link.” By the terms of this narrative, we human beings are implicitly condemned by our biology to behave in the ways in which we do.

But an increasing number of finds, like the one just announced of the new species Homo naledi at Dinaledi (“Rising Star”) cave in South Africa, have made it very plain that this narrative is wrong. Human evolution has most emphatically not been a simple process of gradual fine-tuning by nature. The discovery at Dinaledi is, of course, one of the most spectacular ever made in paleoanthropology. Only one comparably rich trove of human fossils has been discovered in the 150-year history of the science: the “Pit of the Bones” at Atapuerca, in northern Spain.  And Dinaledi is likely to overshadow even this in the sheer opulence of its fossil contents. But a steady stream of newly found hominid species — the most recent of them, Australopithecus deyiremeda, was announced only this last May — has emphasized that, in sharp contrast to what we had believed, human evolution was vigorous process of evolutionary experimentation.

Over the past 7 million years, the first 5 million of them in Africa alone, a huge variety of hominid species was produced, each one a unique exploration of the potential offered by being an upright biped with clever hands, great stamina, and an increasingly large brain. Each of these variations on the hominid theme was in turn tossed out onto the ecological stage to thrive in competition with its fellow hominids and other creatures or, more likely, to subside into extinction.

Nobody can yet say exactly where the curious Homo naledi — small-brained, short-statured and evidently an accomplished climber despite being adapted to move upright on the ground — fits into this complicated picture.  The team that excavated the bones has moved with astonishing swiftness to share them with scientific colleagues and the public alike, creating a refreshing precedent for the future. But this very swiftness means that its recent announcement can be no more than a progress report, and a firm platform for future research by the wider scientific community, as well as by the finders. There is clearly much excitement to come from Dinaledi, which is as yet only partially excavated and remains undated.

But what we can already say is that these amazing finds amply confirm our emerging picture of human evolution not as the traditional one-man play, but as a complex drama involving numerous characters that actively interacted both with each other, and with the complex and constantly changing environments around them. In this view, our species is simply the one that survived this vigorous process of natural experimentation and triage. What’s more, it is very unusual indeed for our species to be the lone hominid on the Earth. A mere 40,000 years ago we shared the planet with at least four other hominid species, and our ability to eliminate the competition in what was an evolutionary eye-blink tells us that we are very unusual creatures indeed.

The new perspective also allows us to understand a lot that remains puzzling if we continue to nurture the idea that we are perfected creatures. Because it is manifest that perfected we are not. For example, for all the intellectual prowess that has allowed us to dominate and despoil our planet, we are notably poor judges both of immediate risk and of the longer-term consequences of our actions. And the underlying evolutionary pattern revealed by finds such as those at Dinaledi helps us understand why this is. We are not the result of a long process of improvement. A lot of chance, and of sheer luck, have been involved in the process by which we became what we are. We have not been molded by Nature to any specifiable condition. Instead, we have free will. And responsibility.

Ian Tattersall is curator emeritus in the Division of Anthropology of the American Museum of Natural History in New York City. The author of many books, including the widely praised "Masters of the Planet," he is often interviewed about human evolution in the media and speaks around the world.