Don't believe the Carly Fiorina hype: Here's every major problem with her performance in the GOP debate

After the 2nd GOP debate last night, Fiorina was instantly crowned the winner. But you should still be worried 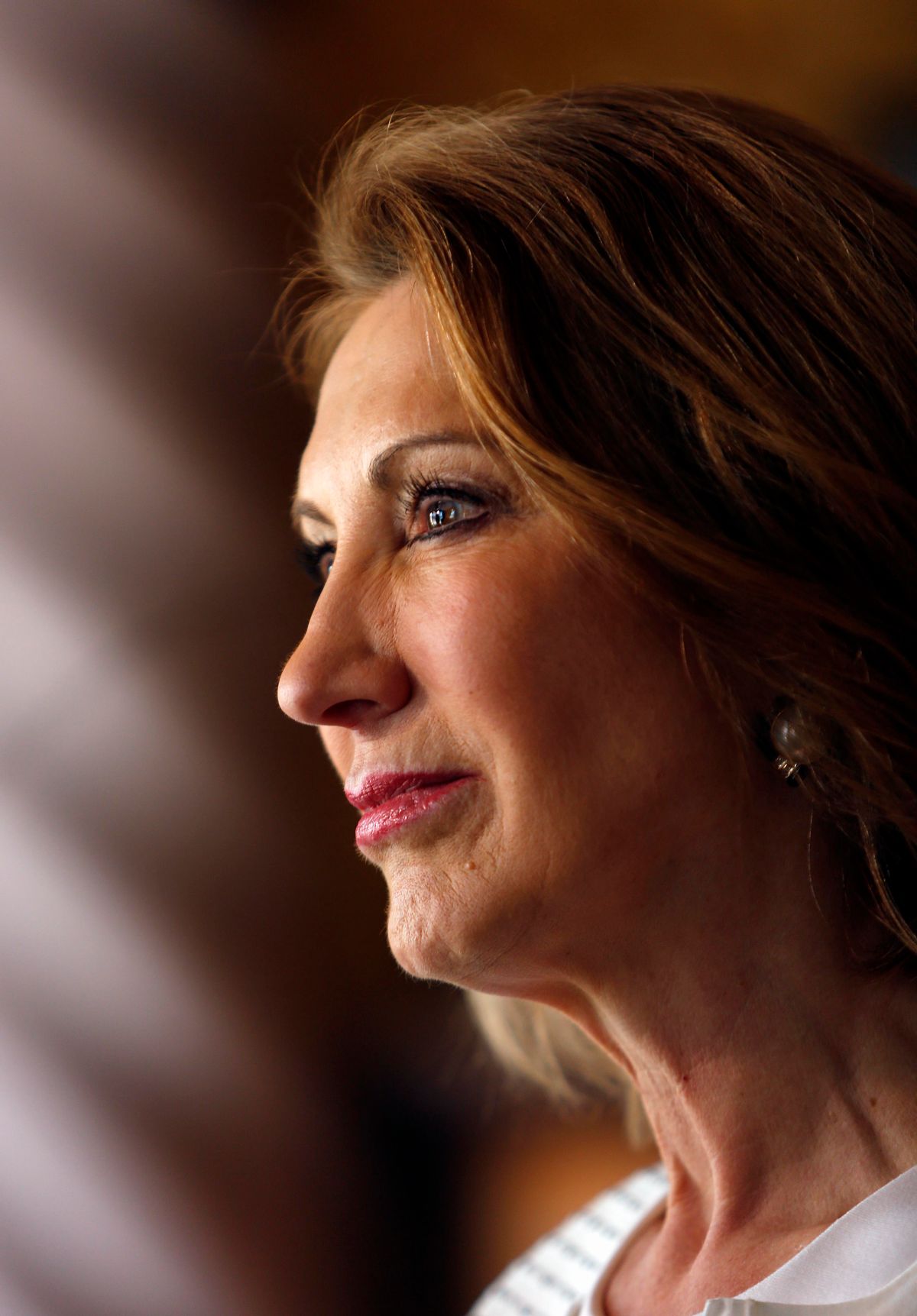 It was Carly Fiorina's night last night. In the very crowded Republican clown car full of fatuous blowhards and screaming hawks, she stood out by being able to think on her feet quickly enough to use standard lines from her well honed, road tested stump speech to good effect as if they were spontaneous answers to the question. Compared to the others she seemed sharp and well-informed and the media dubbed her the big winner.

Fiorina has come a long way since the days of the "Demon Sheep."

Last night, CNN's Jake Tapper asked her about Trump's rude comments insulting her looks in Rolling Stone. She smoothly used something Trump had said earlier to segue into a prepared line, that she thought "women all over this country heard very clearly what Mr. Trump said." Then she stood still and stone-faced, staring forward while Trump stammered that he thought she had a "beautiful face" and was a beautiful woman. She never looked at him. It may have gotten the biggest applause of the night.

MSNBC's Chris Matthews seemed especially excited that she was going for Hillary Clinton's throat in a way that others could not, but he is apparently unaware that this is one of the reasons she's in the race in the first place. Recall this from an earlier piece I wrote about Fiorina:

A pro-Cruz super PAC controlled by millionaire Robert Mercer (who had written checks for 5 million to Cruz’s effort) sent $500,0000 to Carly Fiorina’s super PAC. How often does it happen that a PAC for one candidate helps one of its rivals in a primary campaign? But New York Times reporter Amy Chozick cleared up the mystery when she tweeted:

"Fiorina finance chairs told me supporters of other candidates have thrown them $$$ to have a woman in race attacking HRC."

Going hard after Clinton is job number one, and unlike her tenure as CEO of HP (and contrary to her claims about that in the debate last night) she's doing it well.

But that is not to say she isn't making a legitimate run for the nomination. She is, after all, a hard core conservative. How often do you find a candidate who has the ability to demagogue on Iran and Planned Parenthood in the same sentence? That's a skill usually limited to only the best hate talk radio hosts. But Fiorina did it last night to great acclaim from right wingers and the media alike. Without taking a breath, she rattled off this speech in less than a minute:

"On day one in the Oval office I will make two phone calls the first to my good friend Bibi Netanyahu to assure him we will stand with the state of Israel. The second to the Supreme leader to tell him that unless and until he opens every nuclear facility to real anytime inspections by our people not his,we the United States of America will make it as difficult as possible to move money around the global financial system. We can do that we don't need anyone's cooperation to do it. And every ally and every adversary in this world will know that the United States of America is back in the leadership business which is how we must stand with out allies. As regards Planned Parenthood, anyone who has watched this videotape, I dare Hillary Clinton, Barack Obama to watch these tapes, watch a fully formed fetus on the table, it's heart beating, its legs kicking while someone says we have to keep it alive to harvest its brain. This is about the character of our nation and if we will not stand up and force President Obama to veto this bill shame on us."

Unfortunately, what she said about the tape is untrue. According to Sarah Kliff at Vox, who has watched the entire set of videos, there is no scene like this. (CNN Fact Check claimed the comment was "true but misleading" because the tape has an unrelated and out of context flash of a scene like this which was edited in after the fact by the videographers. That's what would normally be called "false" or more precisely "a hoax".) But it doesn't matter. The folks in the audience loved it and judging by the Twitter commentary so did conservatives. After all, it may have been the most extreme rhetoric of the entire debate.

In fact, much of what Fiorina says is either untrue or incoherent, which her polished style of rapid-fire answers containing long lists of memorized specifics obscures. She is a master at what we used to call "dazzling them with BS." She claims to have a well thought out plan for everything from dealing with the Ayatollah (only after conferring with her "good friend" Bibi Netanyahu) -- by calling him up and demanding that he allows Americans to inspect his nuclear facilities anytime we choose or we'll start "moving his money around the financial system" -- to enlarging the sixth fleet and putting missile defense into Poland. The first bit of magical thinking is so common among the Republican candidates that it's not worth commenting upon except to say that the presidency would be a part time job if it was that easy. As for her military "prescriptions," let's just say they are vacuous nonsense. Here's what she said she would do about Russia

"What I would do, immediately, is begin rebuilding the Sixth Fleet, I would begin rebuilding the missile defense program in Poland, I would conduct regular, aggressive military exercises in the Baltic states. I'd probably send a few thousand more troops into Germany. Vladimir Putin would get the message. By the way, the reason it is so critically important that every one of us know General Suleimani's name is because Russia is in Syria right now, because the head of the Quds force traveled to Russia and talked Vladimir Putin into aligning themselves with Iran and Syria to prop up Bashar al- Assad."

That sounds very impressive, except, as Ezra Klein pointed out, the nuclear armed Sixth Fleet is gigantic already, the U.S. is already conducting military exercises in the Baltics and we already have 40,000 troops in Germany. Oh, and Vladimir Putin, General Suleimani and Bashar al-Assad will have been dead for decades, if not centuries, by the time a missile shield is installed in Poland.

Her comments on immigration were likewise factually challenged as was her tedious, mind-numbing list of alleged accomplishments as CEO of Hewlett Packard. (She's been repeatedly fact checked on this and just keeps on saying it anyway.) She didn't go into it last night, but in previous interviews her comments on climate change were wrong in every way.

And as an illustration of just how fundamentally dishonest she is, even her own personal story is exaggerated. She often says she started out as a secretary and rose to become the first woman CEO of a Fortune 500 company. It's true that she once did clerical work, but it was in summers during college and for a brief time between dropping out of law school and starting business school. After she got her MBA she joined a management training program at AT& T where she climbed the ladder. It takes nothing away from her accomplishment, which is very impressive, to point out that the image she paints of a plucky gal from the typing pool raising herself up by her bootstraps isn't exactly how it happened.

Fiorina has proven herself to be a shrewd and talented politician. She is very confident and well-prepared and we can expect to see her poll numbers rise after last night's performance. But considering her incoherent policy prescriptions, nobody who cares about such things should feel sanguine that she would be any improvement over the other "outsider" candidates, Carson and Trump.

Fiorina is worth over $50 million and didn't bother to pay the debts from her losing 2010 Senate campaign until she decided to run for president. (One of her former aides said “I’d rather go to Iraq than work for Carly Fiorina again.")   So considering her very loose relationship with the truth, her failed record as a businesswoman which left thousands of people's lives in ruins and her cavalier attitude about paying her debts, it's awfully ironic that the lines she delivers with the most righteous passion are harsh criticisms of Hillary Clinton's honesty and trustworthiness. That's something else she has in common with Trump -- chutzpah.