The GOP debate's most shocking moment: A meaningful conversation about the War on Drugs

While Bush, Christie & Fiorina clung to outdated and disproven solutions, Rand Paul had a rare moment of insight 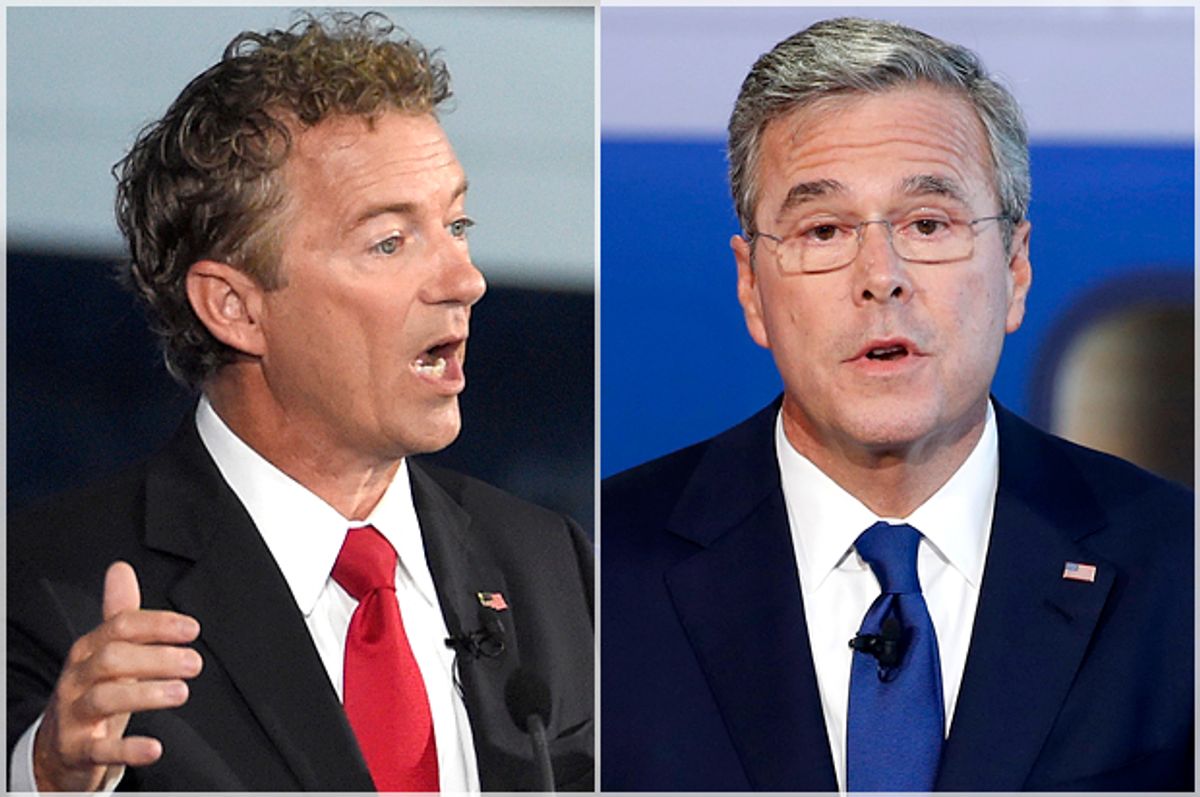 For the most part, the Republican Presidential debates -- two hours of kid's table debate followed by over three hours of main event-- were useless theater.

Jake Tapper and CNN's other hosts staged snippy confrontations between candidates who've disagreed, with a preference for including Donald Trump as a target. Eighteen months after CNN dedicated breathless non-stop coverage to finding Malaysian Air Flight MH370, the network seemed thrilled to have finally found a plane, any plane, and all the better that it was Ronald Reagan's Air Force One to serve as the regal backdrop for their staged confrontations.

In one key staged confrontation, Trump and Carly Fiorina argued for some minutes about which was the bigger business failure, until Chris Christie thankfully intervened and reminded that the campaign should be about workers's careers. "While I'm as entertained as anyone by this personal back-and-forth about the history of Donald and Carly's career, ... the 55-year-old construction worker out in that audience tonight who doesn't have a job ... could care less about your careers, they care about theirs."

But buried in the tedium, two and a half hours into the big kids debate, there was one fascinating policy debate.

Tapper tried to set it up as yet another staged confrontation, asking Rand Paul what he thought of Christie's recent comment promising to shut down Colorado's legalized pot markets. "If you're getting high in Colorado today," Tapper quoted Christie, "enjoy it until January 2017, because I will enforce the federal laws against marijuana."

At first, Paul followed the tactic a number of candidates used all night -- redirection -- denouncing the hypocrisy of another candidate who had smoked pot in high school but now opposed it. "There is at least one prominent example on the stage of someone who says they smoked pot in high school, and yet the people going to jail for this are poor people, often African-Americans and often Hispanics, and yet the rich kids who use drugs aren't."

But then Paul laid out a policy, treatment and drug courts; described the damage the drug war has done; and repeated that the damage had been inflicted primarily on minorities. He then reminded that Republicans are supposed to support state's rights on matters of crime:

"I don't think that the federal government should override the states," Paul argued against Christie's promise to enforce federal drug laws even in Colorado. "I believe in the 10th Amendment and I really will say that the states are left to themselves."

Tapper was not to be denied the opportunity for a staged confrontation, so he turned from this policy discussion back to Paul's accusation of hypocrisy. Who was the mystery candidate he talking about?

That's when Jeb Bush took an awkward stab at candor and 'fessed up: "He was talking about me... 40 years ago, I smoked marijuana, and I admit it." Bush then turned the discussion to an issue at the forefront in New Hampshire's primary, the state's skyrocketing heroin addiction. "Rand, you know this because you're campaigning in New Hampshire like all of us, and you see the epidemic of heroin, the overdoses of heroin that's taking place." As Paul had done, Bush endorsed more treatment, more second chances, and bragged that Florida had the most drug courts in the country.

Paul, reminding Bush that as Governor of Florida he had opposed even medical marijuana, repeated why Bush's hypocrisy on drugs was so important. "Under the current circumstances, kids who had privilege like you do, don't go to jail, but the poor kids in our inner cities go to jail."

Christie -- whom, of course, Tapper had set up in the initial confrontation -- interjected to highlight New Jersey's move towards decriminalization. "New Jersey is the first state in the nation that now says if you are non-violent, non-dealing drug user, that you don't go to jail for your first offense." He pitched the policy as a pro-life stance. "I think you need to be pro-life for more than just the time in the womb." Christie argued. "And when they're the 16-year-old drug addict in the Florida county lockup, that life is just as precious as the life in the womb."

Throughout this exchange, Fiorina clamored to speak. When Tapper finally gave her the chance, she reminded that her commitment to treatment comes from having lost her step-daughter, Lori Ann, in 2009. "My husband Frank and I buried a child to drug addiction." Ultimately, Fiorina's response was off. Even though her step-daughter's addiction included alcoholism, Fiorina tried to distinguish pot from beer, and today's pot from that which Jeb smoked 40 years ago. "We are misleading young people when we tell them that marijuana is just like having a beer. It's not. And the marijuana that kids are smoking today is not the same as the marijuana that Jeb Bush smoked 40 years ago."

But that goes to the core of the issue: Even while Christie and Bush, to differing degrees, cling to old-style War on Drug rhetoric, this campaign (and particularly the New Hampshire addiction crisis Bush mentioned) will force real debate about what combination of treatment, decriminalization, legalization, and education might provide some way out of the failed drug war. This discussion framed that dramatic policy shift in rhetoric -- states rights and pro life -- that Republicans can rally behind.

All this, of course, took place in the Reagan library, the shrine to the man who formally declared the now-failed War on Drugs in 1982. CNN even used his damn plane to ask candidates to project themselves into Reagan's legacy. "Ronald Reagan, the 40th President, used the plane behind you to accomplish a great many things....How will the world look different once your Air Force One is parked in the hangar of your presidential library?" But one of the most constructive policy discussions in last night's debate constituted a renunciation, finally, of Reagan's legacy.