Ursula K. Le Guin on myths, Modernism and why "I'm a little bit suspicious of the MFA program" 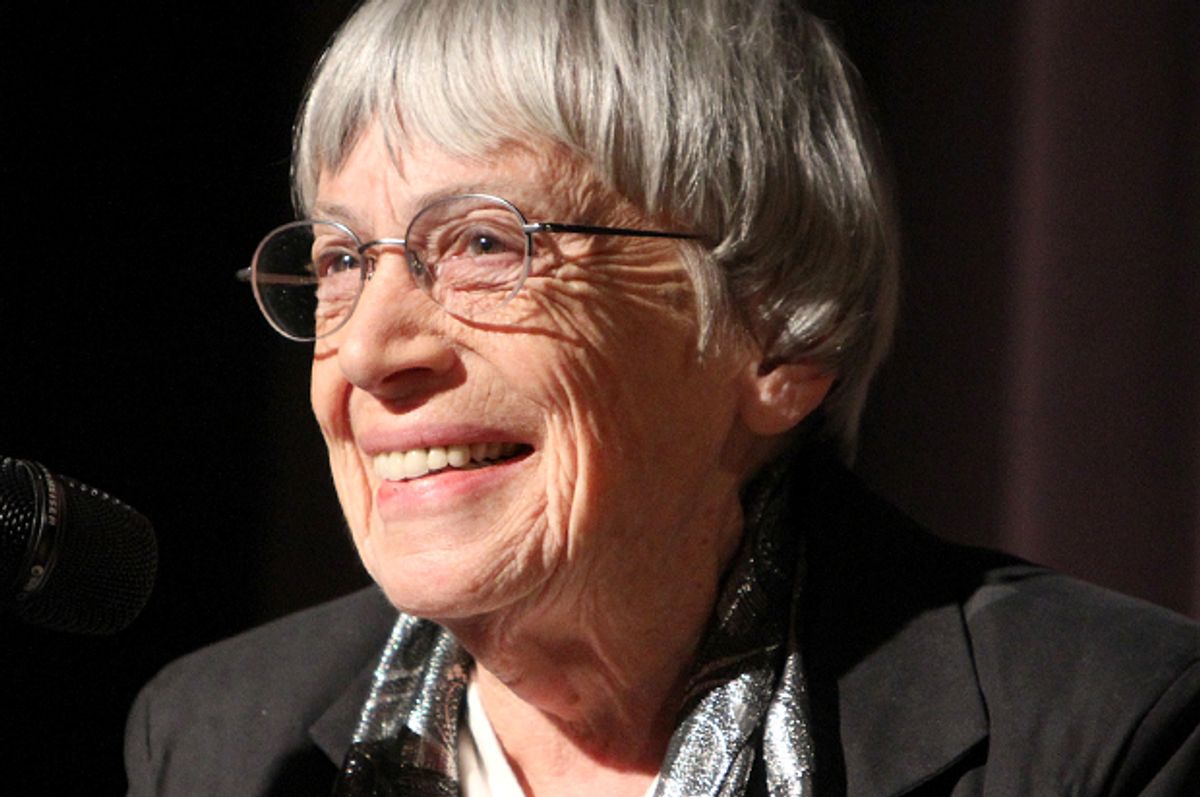 It’s hard to think of another living author who has written so well for so long in so many styles as Ursula K. Le Guin. Best known as a novelist of science fiction (“The Left Hand of Darkness”) and fantasy (“A Wizard of Earthsea”), Le Guin has also written award-winning short stories in numerous genres, literary criticism, poetry, a novel set in Rome in the age of “The Aeneid” (“Lavinia”), and angry, eloquent essays against Amazon.

So her book on writing – “Steering the Craft: A 21st Century Guide to Sailing the Sea of Story” – is not something any aspiring fiction writer should ignore. The book – significantly revised from its original 1998 edition – avoids laying down strict rules, but takes a back-to-basics approach to prose writing. Each chapter includes examples of good writing to emulate, including Tolkien and a tale from a Native American tribe of Oregon, but with emphasis on writers like Kipling, Dickens and Virginia Woolf. The book, in short, is both open and in some ways resolutely old-fashioned.

We spoke to Le Guin – who answers questions about the craft of writing on Book View Café here -- from her home in Portland, Oregon. The interview has been edited slightly for clarity.

This book came out of a workshop you ran in the ‘90s – can you tell us a little about the group and how it led to the book?

It was a single, one-week workshop; I forget what I called it, something like “Nuts and Bolts.” I’d been getting a lot of writers who had some experience at writing – serious, committed people – but because of what education has been doing, or not doing, in the United States over the last 40, 50 years, they really didn’t know the tools they had in their workbox. They really didn’t have a lot of English grammar. If I said, "Hey your syntax is a little ‘wonky,’" they didn’t know what syntax was. And this makes it kind of hard to discuss writing if you don’t have the vocabulary of the very elements of your work – which is how the English language is put together, and what constitutes a sentence and a non-sentence and so on.

And they were really afraid of semicolons! The semicolon struck terror into the hearts of many grown women. Well, there’s something wrong there. The semicolon is a pair of dots that ought to be fully under your control. So I did a workshop trying to work out what people knew and didn’t know, which was interesting for both me and them. That just grew into the original book.

What has disappeared, then, from a writer’s education that used to be valuable for writers?

Being very old, I had the kind of education that now seems incredibly sort of learned to people now in school. We learned to write, not just to type and print. But so we could write in a rapid cursive hand – which can be useful if the electricity’s off. And we were also pretty well drilled in English grammar, which nobody loved, probably not the teacher, either. But it really is awfully useful if you are going to write English. You can speak very well without knowing it, but when it comes to writing, there are certain things you have to know about making yourself clear to a reader. It’s very different from speaking to a listener. And apparently less and less of those skills are being taught.

You write in the book about the importance of writing students reading their work aloud. Why is that important and do you still do that when you write something?

The first chapter of the book is called “The Sound of Your Writing.” It’s something that is very much neglected critically and in teaching: what a sentence or a little piece of prose sounds like. Language is basically speaking, and writing is a way of preserving it. It just so happens that I’m the kind of person who hears my writing; I hear it silently in my head, so I mostly don’t have to read it to myself.

But a lot of people don’t hear their writing, and it never occurred to them that they should. We used to recite and to have to learn poems in school. All that seems to be gone. Reading aloud is not something that people seem to do much anymore, though just about everyone seems to enjoy being read to. It’s like the page has fallen silent. And I think a writer needs to be able to hear the page they’re writing. And to speak a sentence out loud you often hear, It’s going clunk right there.

The flaws become much more evident when they’re read aloud, I think.

Yeah – and there’s so much dialogue in modern fiction. Oh, Lord, when you start to read it out loud it’s just dead. You can cut a lot out of it.

You say early in the book, “In the past 20 years, writing itself has begun to be differently understood in many ways, while publishing has been going through overwhelming and bewildering changes.” I think I know what you mean, but tell us how this changes the way writers write in the 21st century.

There have been so many changes in the 21st century. The first version of the book came out in ’98 – which really wasn’t that long ago – and e-publication was still very young. No one knew what was going on at all. Nobody was doing much of it. And that is totally different now – e-publication and self-publication are now major options for a young writer. That changes the game: The writer may not be writing to be read by an editor at all. And if they self-publish, how are they going to make people hear about their books?

And the publishers have now been forced, largely by market pressures, and Amazon, into extreme conservatism in publishing: They want safe books that will sell fast upfront. So the more experimental book, or what they call the midlist, gets harder and harder. It’s harder to publish a new writer who doesn’t have a nice, safe name.

So the rules of the game are all changing, and the game itself is kind of a different game. And I couldn’t do much about that in my book rather than point out that fact. The rules are still changing; no one knows where it’s going.

It seems like the idea behind your book is that with all these changes, the elements of good writing – clarity, for instance – are still in place. A lot of things have changed, but they haven’t.

They are completely immune to whatever the formal is – whether it’s electronic or in print or carved in stone, there are certain kinds of absolute, I don’t want to say rules … But there is a good way to write, and a not-so-good way to write.

A lot of the examples you offer students in the book come from 19th century and Modernist literature, especially Virginia Woolf. I wonder if these parts of the mainstream literary canon are still useful to writers interested in fantasy or science fiction, two styles you’ve worked in a lot. Should an aspiring science fiction writer read Virginia Woolf?

Well, it depends: Some people just can’t get in tune with Woolf. I use her because she’s such a marvelous example of such subtle and magnificent uses of the English language. Like her point-of-view changing. Watch the master – it’s like listening to the great pianists … And it doesn’t matter which genre you’re working in.

The other kind of writing you’re very steeped in is oral literature – myth, folklore, fables, that kind of thing. Do those kinds of stories follow the same rules and patterns we’re talking about here?

Oral literature definitely has its own ways of doing things. It tends to involve a lot of repetition – if you do a lot of that in a modern prose narrative, people will say, What is wrong? The rhythms can be taught in [contemporary] prose narrative. But the rhythms are just totally different.

We’re in the middle of the technological changes you mention, and there’s a debate about MFA programs. There are books, writing workshops, conferences and so on. What seems like the best and worst ways to do this?

I have to say I’m a little bit suspicious of the MFA program as they’ve become the way to become a writer. They’re kind of perpetuating the heritage of the Iowa writing program, which I’ve never been in very good sync with.

I do think in some ways the peer group, of writers of more or less similar skills and experience, but not too similar … People who meet and read each other’s writing, who meet and critique and talk about it, it’s something that did not exist when I was a young writer. I’ve seen it work. I’ve been in groups; I’m in a poetry group now. It’s simply very nourishing and very useful. It kind of keeps your eyes on the work. And you get feedback. It takes writers out of their writer’s loneliness – it makes it a bit more like being a musician, where you do it with other people.

You weren’t shaped by this workshop approach … You studied Italian and French literature in college, and then came up mostly through publishing in magazines. Is it fair to say you’d be a very different writer if you’d come up this way?

I don’t know – the world has changed and I’ve changed. But I never looked for a group of writers when I was young. I’m a bit of a loner. Counter-suggestible. I just clawed my way up by submitting stuff to editors, the way everyone did then. There were a lot more magazines then. It was a much more open field. It seemed difficult then but it’s much more difficult now.