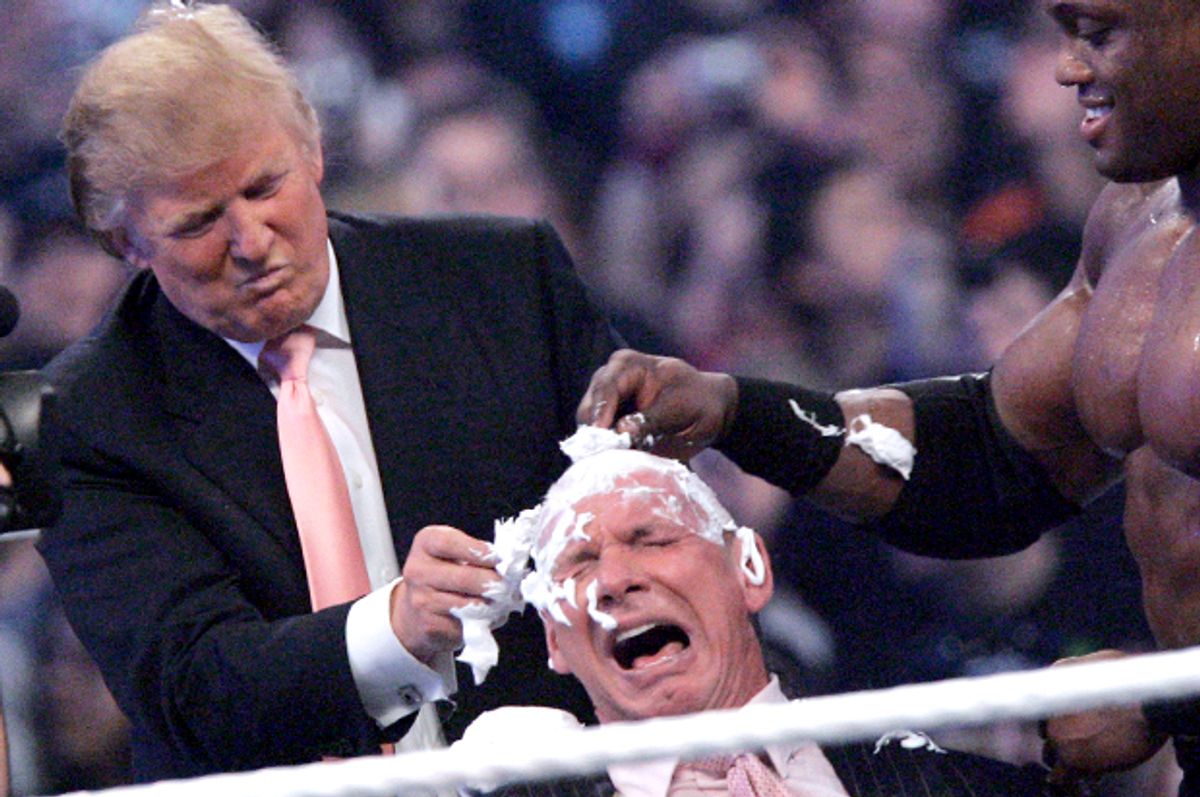 Donald Trump told Thursday night’s debate audience that his Secret Service code name would be “Humble,” and he’s since proceeded to at least try to imitate someone who’s capable of humility. In his comparatively low-key victory laps Thursday night and Friday morning, he claimed that polls showed he won the debate, but he also praised CNN’s moderators and most of his rivals, telling MSNBC’s “Morning Joe:” “I thought there was nobody that did poorly.”

Of course he got in some digs. “I thought [Jeb Bush] did very well,” Trump allowed, but then he lowered a passive aggressive (for Trump) boom: “I thought he was going to push me harder to apologize to his wife.” So did everyone, Donald, so did everyone. That was a classy, almost humble way to insult Bush’s manhood.

“I think that Carly did well,” he averred, then added, “but I didn’t see it as standout.” That's funny; most everybody else did. But Ben Carson got the most insulting compliment: “I just like him as a person frankly. And I thought his whole thing on autism, where he backed me up, was terrific.”

In fact, that was Carson’s lowest moment, at least when it comes to integrity. The neurosurgeon has correctly criticized Trump’s crackpot connection of autism to vaccines, but confronted with his past words by CNN, he sleepily backed down.

But Trump offered his sharpest backhanded compliments to debate host CNN. “I thought I was treated fairly,” he told the Morning Joe crew, an implicit insult to his friends at Fox, whom he attacked as unfair after the last debate. But then he delivered what was actually some fair criticism:

I thought I was on too much. I felt badly for everybody else. Every question had to do with me. Even the first characters [in the undercard debate], I mean, everything was about Trump. And then they go into this debate and there was split screens all over the place. I’ve never seen anything like it. It was a little bit unfair to a lot of other people, frankly. But from my standpoint, I was treated fairly.

I mean, that’s a classic humble brag – I don't know why’s everyone's so obsessed with me! Can we talk some more about me? – but it’s a question a lot of us were asking Thursday night. Most of the three hour debate consisted of the CNN moderators confronting not only Trump, but the other candidates, with Trump’s most outrageous words, forcing them either to attack him or find new and clever ways to pivot back to their own message.

“Vince McMahon would’ve loved it, because that was a WWE kind of a thing,” Trump explained. And that’s exactly what it was: The candidates were primed to faux-fight, for the entertainment of the huge audience at home. “Actually a couple of them came up and they said, ‘you know what Donald—can I hit you so that I can get a little bit more time?’’ Because some of these guys, I felt badly—a lot of them are friends of mine and they got, they got no air time last night.”

But who am I to criticize? I found my own attention drifting during some of the debate spans where Trump was sidelined. It was very hard to focus on 11 people, plus three very uneven moderators – the de-fanging of Hugh Hewitt was shocking and a little sad, but made for boring television – for more than three hours. Trump claims CNN made the debate longer to milk the clash for ratings and cash; CNN says they devoted more time because they added an 11th contender, Carly Fiorina, late in the game. Both can be true, I guess.

Still, Trump is right about the GOP’s WWE 2016 primary. It’s taking its inspiration from Vince McMahon, not Reince Priebus. And that’s why the WWE Hall of Famer and entertainer extraordinaire is on top, at least for now.