Donald Trump, the Greatest Show on Earth: He's the second coming of P.T. Barnum, not the next Reagan 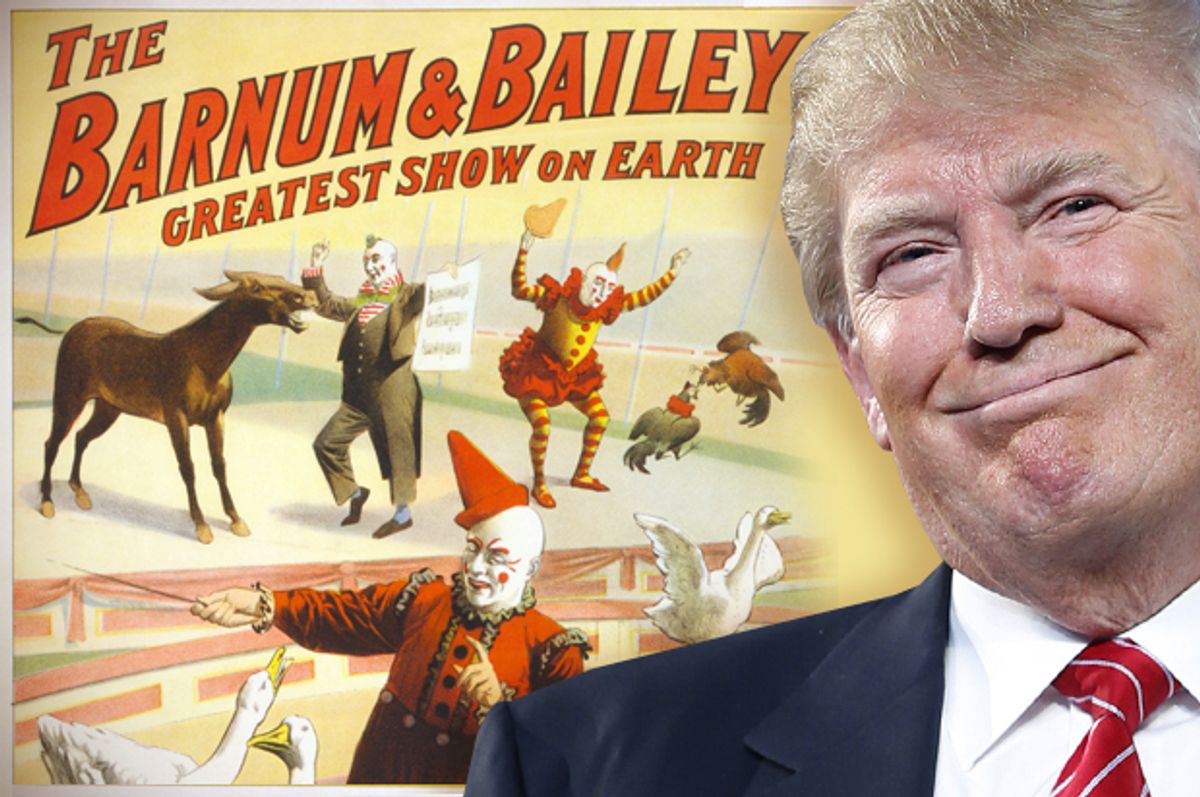 Donald J. Trump is not, as Matthew Pressman argues in the Atlantic, Ronald Reagan’s heir.

Rather, he’s the heir of the 19th-century showman Phineas Taylor Barnum – disingenue extraordinaire and purveyor of humbug (that quaint, old-timey synonym for bullshit).

This is not, of course, to deny the many compelling parallels that Pressman has drawn: Trump and Reagan’s shared affinity for simple answers to complex questions; their common belief that American military muscle – flexed tirelessly and onanistically – can restore the country’s "tarnished" image abroad. All of this is true.

But despite its strengths, Pressman’s article neglects what I see as the central difference between the two politicians: While Reagan was unceasingly earnest — grandfatherly, even when cracking jokes — Trump is manifestly full of shit.

Indeed, despite his "truth-teller" appeal in some circles, much of Trump’s attraction stems from the fact that his statements are not quite believable (even among the absurdist troupe that is the Republican presidential primary field).

This is what makes Trump Barnum-esque: the fact that viewers are invited, implicitly, to decide whether Trump actually means any of what he says. Can a man really love himself as much as Trump? Does he truly think that "bombing the hell" out of ISIS will fix the quagmire in Syria and Iraq? Can he seriously believe that the Mexican government will agree to pay for a border wall? Does he honestly expect that he can negotiate a better nuclear deal with Iran through sheer boardroom finesse?

Scholars have called this the "operational aesthetic": a kind of spectacle in which the conversation surrounding the show becomes the show itself. And it was pioneered by P.T. Barnum in the decades prior to the Civil War, long before the showman became a senior partner in the Barnum and Bailey Circus.

What did this operational aesthetic look like in practice? Consider, for example, Barnum’s famous "Feejee Mermaid": a stuffed monkey’s torso, sewn to the tail of a fish, that Barnum tried to pass off as a mythical sea creature – and which Americans flocked to see in vast numbers.

Now, the people who paid admission to see this rank fraud were not idiots — not all of them, at least. While 19th-century Americans had a more magical conception of nature’s possibilities than their 21st-century counterparts, many were skeptical when it came to the existence of merpeople. And many more were familiar with Barnum’s reputation for deception.

But they still went to see the "Feejee Mermaid" because they enjoyed the spectacle. They enjoyed the act of looking for the seams where the monkey flesh had been woven into the fish scales. They enjoyed talking to others engaged in the same act. And they relished the possibility that some spectators were well and truly being taken in by Barnum’s fraud.

Barnum understood why his audiences came. And so, time and again, Barnum returned to the public with a litany of spectacles that tested the boundaries of spectators’ belief (while also, at times, exploiting white patrons' racism): Joice Heth, an elderly African-American woman who he told viewers was the 161-year old nurse of George Washington; William Henry Johnson, an African-American man from New Jersey who Barnum claimed was a "missing link" between humans and apes; and even a hairy horse that he tried to pawn off as a living fossil.

In those instances, moreover, in which spectators did not immediately doubt his claims, Barnum found creative ways to (anonymously) accuse himself of fraud. When New York audiences, for instance, failed to suspect that "bearded lady" Josephine Clofullia was actually a man, Barnum hired an acquaintance to sue him for false advertising. Taking his case before a magistrate – and, more important, the press — Barnum fed the public a tongue-in-cheek defense of Clofullia’s womanhood. In doing so, he awakening New Yorkers’ interest in a question that had previously failed to cross their minds. In the weeks that followed, viewers poured through Barnum’s doors to pull on Clofullia’s beard for themselves.

Whether Donald J. Trump is conversant in the finer points of P.T. Barnum’s career and entertainment philosophy remains, for the moment, an unanswered question. But it nevertheless seems clear that, intentionally or otherwise, Trump has mastered Barnum’s "arts of deception," as scholar James Cook calls them: the ability to invite publicity by inviting doubt.

This, I would argue, is the secret to Trump’s success thus far. Yes, some supporters see in him an anti-establishment truth-teller – a voice crying out in the wilderness against a robotic, poll-driven, bought-and-sold political class. A man who says what he means and means what he says; an antidote to political correctness run amok. And a fearless opponent of everyone from Islamist extremists and immigrants to "loser" politicians and uppity feminists.

Barnum, I should note, had his wide-eyed acolytes as well.

But among the bulk of Trump’s supporters, I would wager that a more ironic appreciation prevails: a fascination that stems, not from his earnestness, but from the opposite. Sure, many conservatives likely approve of what he’s saying. But if that alone explained his support, Republican voters would have little reason to prefer Trump’s misogynistic, sabre-rattling, xenophobia over that of his opponents. No, his support comes not from his substance but from his style: a delicious disingenuousness after 16 years of George W. Bush's and Barack Obama’s deadpan sincerity (unperturbable, even when either has been peddling lies).

This, perhaps, is difficult to grasp because irony, in the liberal imagination, is the purview of the left. Hipsters and urban intellectuals revel in the ironic; not the country-music crowd, with their celebrations of hometown barbeques, America, God and beer — right?

But, if liberals, leftists and Democrats want to defeat Trump, they had better grasp – and grasp quickly – that irony’s hour has come round at last in red-state America.

The good news: Irony is unlikely to carry the day in the long run. While Americans may be willing to indulge in the operational aesthetic prior to primary season, they’re likely to ditch it once the results from Iowa and New Hampshire roll in. After all, we’ve had numerous presidential candidates who were full of shit. But we’ve had few who were openly full of shit.

The bad news: In the meantime, Trump is doing undisputable harm. Like Barnum before him – whose acts promoted appalling ideas about race, ethnicity and gender – Trump’s candidacy has put language on the mainstream stage that has no place in American life. While Trump may yet fail, he’s injected a level of racist xenophobia, base misogyny and warmongering demagoguery into political discourse that should trouble everyone.

Serious or not, Trump will have to answer for the consequences of his campaign.