Where's the next "Mad Men" or "Breaking Bad?": TV now is overstuffed, underdeveloped and crying out for must-watch shows 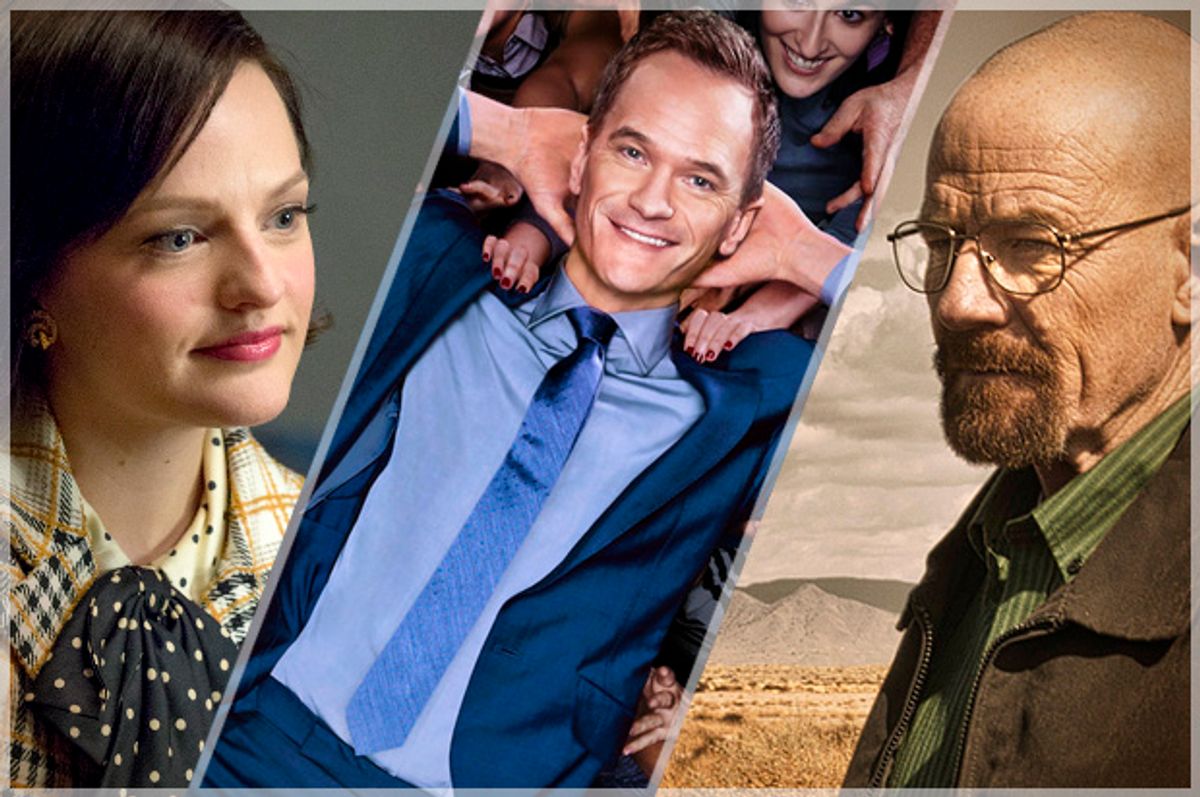 Earlier this week, in a burst of schadenfreude, I decided to attend the taping for NBC’s “Best Time Ever With Neil Patrick Harris,” which aired the first of its eight live broadcasts last Tuesday night at 10 p.m. It was far too late, on a weeknight, to be in Queens (at the Kaufman Astoria studios, lit in rainbow hues, with huge spotlights chasing beams into the clear, breezy night; but still, Queens). Worse, being a member of a live studio audience is rather exhausting—glitzy, perhaps, but a marathon of forced enthusiasm, from lining up to be seated at 8 p.m. to finally being released, around 11:30 p.m. We were constantly being asked if we were having fun yet, if we were excited to see Neil Patrick Harris, if we were looking forward to being on live television; we were told, at varying points, to stand and applaud, to clap in rhythm, and to offer up “oohs” and “aahs” when Harris and his guest host, Reese Witherspoon, donned helmets and onesies to climb an obstacle course. A few days later, I made a point of watching the episode (available on Hulu), partly to see if “Best Time Ever” felt different on television, and partly to see if I could spot my black-clad, bespectacled visage in the sea of faces. I eventually did spot myself. In the back row of the audience, next to two enthusiastic couples. I look completely baffled.

That is, in a nutshell, how I feel about television this fall. On Sunday night, Emmys will put a capper on the 2014-2015 television season; Monday, broadcast television returns with a bang. It’s a moment to think about television as a whole—about how the industry is making the programming we love, who it hires to do that, and why it sometimes fails, despite spending lots of money trying. And what seems to be the case for the slew of new programming flooding the networks is a lot of trying very hard and getting nowhere—painfully illustrated by Harris, in “Best Time Ever,” executing the premiere of his live show at breakneck pace, running from dumb setup to dumber payoff. Harris and his crew are so, so excited by television—by the audience, by the money, by the lights/camera/action. So why does clapping along feel like such a chore?

A much-discussed phenomenon, in the last few months, is what the TV industry and critics have been calling “peak TV” or “too much TV”—fueled by this infographic from FX, which was released this summer. That graph might look like the number of scripted shows is dropping, but look closely—that last bar is for 2015 to date — this, in August. There will be more than 400 scripted television shows this year, and there is no way that any human could reasonably watch all of them. The result is a market absolutely glutted with programming, and an audience that increasingly falls into niches—cult comedy, primetime soaps, shows aimed at black audiences, shows for teen girls. Even though this drives down overall viewership of any one thing—and even though making money off of these shows is a confusing and at times faulty process—networks, new and old, keep churning out television.

At the same time, as Mo Ryan observed cannily at the Huffington Post, quality control has plummeted. Even the prestige network, HBO—which single-handedly kickstarted what we call the Golden Age of TV—is holding onto its reputation for conversation-shaping drama with “Game Of Thrones” alone. The priority of digital networks like Netflix, Hulu and Amazon, as Ryan writes, is mostly to get content onto the platform, and not necessarily to develop it—meaning that talented and visionary auteurs like Raphael Bob-Waksberg and Jill Soloway produce the nimble and affecting “Bojack Horseman” and “Transparent,” while shows like “House Of Cards” and “Hand Of God” get mired in their own droning monotone, their scripted dead-ends.

The problem is even worse in cable, which is how all of this Golden Era stuff got started. Cable appears to be stuck in an endless loop of trying to clone that which has worked before. FX, for example, debuted another Kurt Sutter show, “The Bastard Executioner,” which is a clear hybrid of Sutter’s previous “Sons Of Anarchy” and the aforementioned mega-hit “Game Of Thrones.” The result is a show that seems to have all of the problems of both, and none of the redeeming qualities—meandering storytelling, gratuitous violence, a bunch of white people, no direction. AMC’s brand used to be the best TV on television, with “Mad Men” and “Breaking Bad”; it’s now the brand of spinoffs, with “Better Call Saul” and “Fear The Walking Dead.” And Showtime is trapped in its own policy of endlessly renewing every show on its lot, meaning “Homeland,” “Ray Donovan,” and “House Of Lies” keep existing, despite diminishing quality, audience interest, and critical relevance.

Broadcast television was long the black sheep of the Golden Age of TV—the branch of the industry with the model that crushed auteur’s voices and edgy narrative, the networks that canceled “Arrested Development” and “Twin Peaks” and “Freaks And Geeks” and “Firefly.” And yet—at least broadcast networks actually exercised quality control, even if at times they did so badly. The revivals of nearly every beloved show on the planet has led to the awkward realization that some lost loves are best left buried—from the fan-alienating twists of “Arrested Development”’s fourth season on Netflix to the confusing decision by Hulu to not only pick up Fox’s canceled “The Mindy Project,” but then to expand its fourth season to a whopping 26 episodes.

Of course, if there was any doubt that broadcast still remained clueless and out of touch with American audiences, there’s always NBC—whose “Best Time Ever” is a half-baked product fueled by desperation and cross-platform marketing; who has missed the boat on the Golden Age of television almost entirely, as creators who cut their teeth on NBC shows have moved to other networks.

Implied in the proliferation of programming is the fact that someone is willing to fund it—whether that’s advertisers, subscribers, board members, executives, or you know, even the viewers (on Kickstarter, after the fact). The Golden Age of television proved that television could be as high-quality as the best cinema and as incisive and rich as novels, yes; more importantly to the industry, though, it proved that audiences could and would show up to five seasons of a Dickensian urban drama, or six seasons of a mafioso’s Freudian struggles. But “The Sopranos” and “The Wire” were shows that really gained their reputations after they aired; “The Wire,” famously, never won a single Emmy. These are shows that have grown larger for being watched well after the fall programming slate—for being discussed well after they finished their runs. It’s a hell of a way to make art, but it’s not really a business model. Television is increasingly desperate to grab viewers immediately, but—also increasingly—not even critics have time to watch the run of something that isn’t immediately demanding their attention.

It’s led to a bizarre situation where there’s more TV than ever, but not a single mainstay drama that really pulls in the majority of people who care about television. “True Detective” might have done it, but even reception to that was divided, and season two dashed any goodwill the brand may have had. “Game Of Thrones” is never quite consistent or nuanced enough. “Rectify” is magnificent, but incredibly niche. “Halt And Catch Fire” took a year to get good. “Homeland” is lost in its own plot convolutions. “Scandal” got too soapy and then quit making any kind of sense. Even my beloved “The Good Wife” lost the thread in season six. The wildly different “Empire” and “Fargo” might be the two best bets for the fall—and though I like both, I would not hold the first season of either up to the first seasons of the leading lights of Golden Age television—your “Mad Men”s and “Breaking Bad”s and “Six Feet Under”s.

It’s not the Golden Age of TV anymore—we have way too much of it for that, and it’s not quite as good, either. In certain niches, excellent programming bubbles up. Alt-comedy, for example, is having a brilliant moment, with “Review,” “BoJack Horseman,” and “Rick And Morty.” Similarly, family-centric dramedies like “Transparent,” “Togetherness,” and “Married” are finding varying degrees of sweetness. Fall TV feels a little more like the start of hunting season—where not only are we looking for the best shows in a wide landscape of contenders, but even within those shows, we’re looking for those flashes of brilliance that we know exist, even if we haven’t seen them in a little while. Meanwhile, it’s never a bad time to rewatch “The Sopranos.”