The game is rigged, even for the Donald: How the GOP can block his nomination 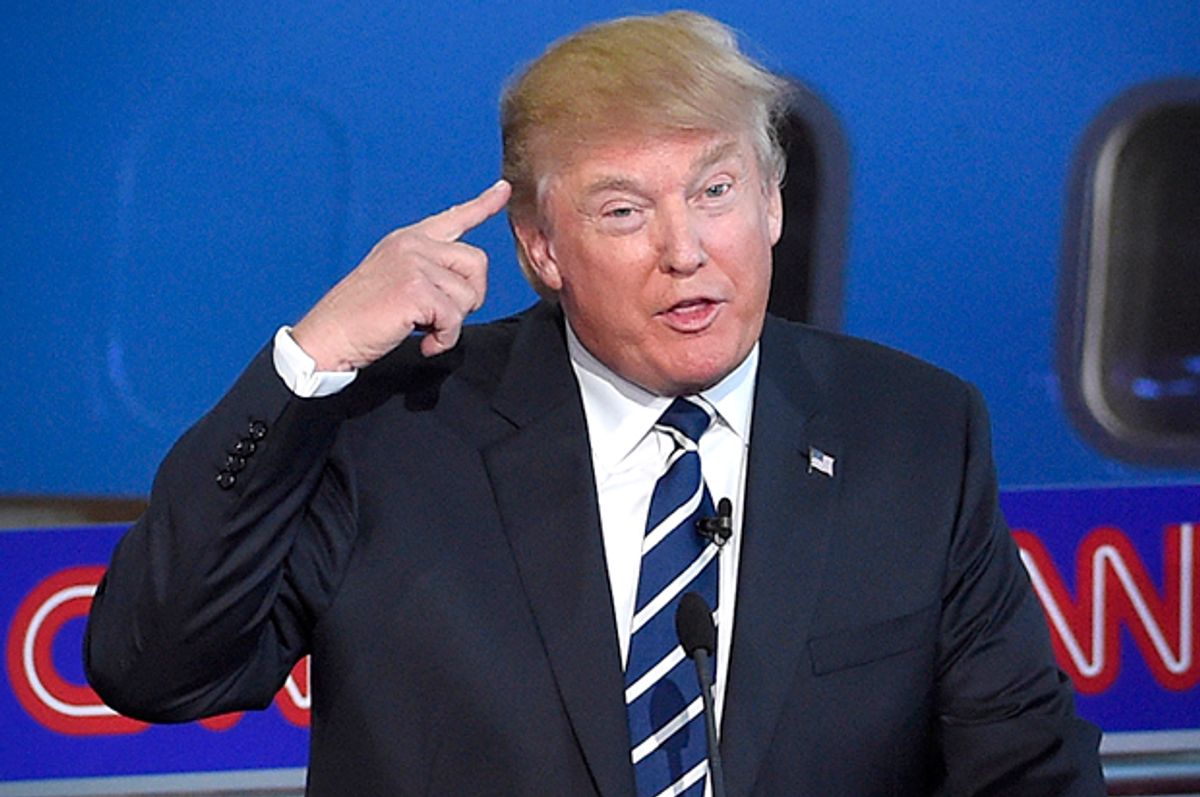 As post-debate pollsters assess how far the mighty Trump may have fallen after Wednesday’s Republican debate, there’s another dynamic that deny him the 2016 nomination: Republican Party bosses could rig the arcane rules governing awarding delegates and convention votes to keep the nomination from Trump.

“I think they will eventually,” said Curly Haugland, a Republican National Committee member from North Dakota and longtime RNC Rules Committee member, in an interview before Wednesday’s presidential debate. “This process was set up for Bush or Walker to win—establishment guys.”

Though Haugland is one of 168 RNC members, he’s a maverick who’s been making the eyebrow-raising argument that the rules governing the 2016 convention are filled with contradictions that nullify whatever occurs before the opening gavel hits the podium in Cleveland next July—including the primary season’s results. Convention delegates and nobody else, he says, get to choose the 2016 presidential ticket.

“Everybody is depending on these primary results, except it is all built on a house of cards, a fabricated reality,” he said. “Everybody wants to have a presumptive nominee. There’s hundreds of millions of dollars at stake to buy votes for primary elections. The votes they are buying are worthless. Nobody wants to hear that story.”

Haugland spent an hour on the phone patiently dissecting the RNC’s 21-page rule book. Delegates are not bound to vote for any candidate once the convention opens, he said, citing various sections. Winner-take-all delegate allocations from the states are prohibited, he said, even though that’s what RNC attorneys want many states to agree to after March 15. The convention is run under Robert’s Rules of Order, not legally bound by state election results. And with so many candidates, it’s likely that no one will reach the RNC’s required threshold to put names officially into nomination, he said, which is a majority of RNC members from 8 states or U.S. territories backing a candidate.

As Haugland said, nobody “wants to hear that story,” because “all of the [primary] votes go away.”

The RNC would not comment. Meanwhile, longtime primary watchers like Richard E. Berg-Andersson, who runs TheGreenPapers.com, one of the most authoritative blogs on the presidential nominating process, said fantasies about brokered conventions and imagined floor fights always emerge in the summer before the main event, yet never materialize.

“I myself remain rather skeptical about all this “mother of all floor battles”/“brokered- or even deadlocked- Convention” talk on the Republican side,” he wrote via e-mail. “Meet the new Convention, same as the old Convention.” As he noted in a Facebook exchange this July, the last time there was a multi-ballot roll call vote at a convention was in 1956, when the Democrats opened it up to pick a vice presidential nominee.

But according to Haugland, the 2016 race is unprecedented in so many ways that all bets are off. “Nobody has been here before,” he said, saying there was no presumptive nominee, no vice-president in waiting, no “remotely obvious” heir apparent, and the RNC establishment was not about to turn over control of its convention to Trump—as they did in 2012 to Mitt Romney before he was nominated.

Depending on how Trump fares once the 2016 state nominating contests begin, party bosses may find themselves paying much more attention to the North Dakotan’s analysis.

Haugland makes a provocative case when dissecting the 42 rules that cover the time period after the 2016 convention is gaveled into order and before delegates adopt new rules for the rest of the convention. But before getting into his fine print, there’s an earlier window where the GOP establishment also could try to rig the rules to make it harder for Trump.

Anybody who has been following election trends in recent years knows that the GOP is the political party that specializes in tilting voting rules to try to shape the outcome. It has done this through adopting dozens of laws toughening voter ID requirements, limiting early voting, demonizing voter registration drives, etc. The RNC has yet to finalize its 2016 primary schedule and how all the states will award delegates. Unlike the Democrats, there is more wiggle room, because in 27 states the GOP uses a version of proportional representation (winners take some, or most—but not all delegates) based on primary results or state conventions. The 2016 schedule and delegate allocation plans won’t be finalized until December.

It’s hard to precisely pinpoint how far party bosses can push the rules to make it harder for Trump to get the 1,236 delegates needed to secure the nomination, but it is clear they can lengthen the distance to the finish line. Suffice it to say, there is one set of rules in play before March 15, when 32 states and territories will hold caucuses or primaries, choosing 51.5 percent of the delegates, and another after that.

Until the March 15 primaries—when Florida, Ohio and Illinois vote—all delegates are allocated via some version of proportional representation. That means the winners above various thresholds (say 10 percent, 15 percent) get most or some of that state’s delegates. The GOP field may see some candidates drop out, but it is likely that a half-dozen or more will keep going—as many have billionaires backing them. Thus, nobody is going to be ahead by much—especially if today’s polling numbers more or less hold firm.

Then, come March 15 and afterward, the final stretch begins. It is here where many states have not yet finalized their delegate allocation plans. The question is whether the RNC could stop a Trump juggernaut by pushing more states into the winner-take-all column or proportional representation column. Right now Florida is one of six winner-take-all states, which Bush is counting on to boost his candidacy after what is expected to be a lackluster start in the earlier contests.

“It will be especially interesting to see what states choose to do,” said Sanford Levinson, a University of Texas law professor whose recent blog assessing Trump’s chances noted that if Trump holds onto 30 percent or more of the delegates and a half-dozen others are dividing up the rest, “none of the others is likely to be all that close to Trump.” In other words, he could emerge with the most delegates—even though it’s not enough to secure the nomination.

There are risks for an anti-Trump GOP establishment with either approach. Pushing more states into the proportional representation camp lengthens the race to accumulating 1,236 delegates. But that “would presumably assure Trump of getting some significant number of delegates, assuming he hasn’t flamed out,” Levinson said. However, pushing more winner-take-all states “obviously is a greater roll of the dice.”

“The deadline for states to provide their draft delegate selection plans to the RNC is not until the beginning of October,” said TheGreenPapers.com’s Tony Roza. “RNC Counsel typically certifies plans around the end of December. Hence we do not know for certain what the process will be.”

Hoagland, a longtime RNC Rules Committee member, said that he has asked RNC General Counsel John Ryder to send him “all the delegate selection plans before they are public” and “he refuses.”

To Haugland, whatever unfolds during the caucus, primary and state convention season—apart from electing delegates who will travel to Cleveland in July—amounts to party “custom,” but is not legally binding. That includes the RNC’s apparent emphasis on requiring 2016’s delegates to commit to voting for a nominee that reflects their state primary or convention results.

“The only reason winner-take-all has even came into play is by custom or practice—but the rules don’t allow it,” he said. “That’s because we have always had a presumptive nominee. You can’t do winner take all—that’s Rule 38… There are so many open questions right now. Most of the media doesn’t want to touch this.”

Haugland explained why the primary season is basically advisory. The RNC was private corporation, he said. It does not operate under state law. It is not legally bound to recognize the results of state elections. It does not have a constitution. It operates under Robert’s Rules of Order for parliamentary procedure, and adopts new rules that follow a four-year schedule built around its national convention.

When looking at the RNC’s current rules, Haugland said they were internally inconsistent—because they are a mishmash of what was adopted for the 2012 convention and actually say different and contradictory things for different time periods.

A preamble says that the rules govern how delegates are to be selected for the 2016 convention “until the next national convention.” Then there are three parts. Rules 1 to 12 concerns organizing the RNC and electing its members. Rules 13-to-25 concerns “covening” of the convention. And Rules 26-to-42 concern the opening “proceedings” until new rules from the Rules Committee are adopted in Cleveland.

The problem, Haugland says, is that key parts of Rules 13-to-25 directly conflict with Rules 26-to-42. For example, Rule 16 “bind the state delegation” to the results of their “proportional or winner take all” votes. But Rule 38 says “no delegate or alternate delegate shall be bound” by what it terms a “unit vote,” which means “a delegation… casts its entire vote as a unit.” Thus, to Haugland, the RNC can’t force states to implement winner take all rules, and can’t force delegates to surrender their votes to a state delegation.

Moreover, Rule 42, says that only Rules 26-42 “shall constitute the standing rules” once the convention begins. In other words, Haugland said all the rules governing the primary season expire with the first smack of the gavel in Cleveland—which is when delegates could start fighting over what rules the 2016 Convention will be operated under.

“The only rules that matter are 26-to-42, which preserves the rights of the delegates to choose the nominee,” Haugland said. “The votes in the primary elections mean nothing except custom… With Robert’s Rules, when a custom and rule conflict, the custom falls away.”

Haugland said there were other problems that could lead to challenging the credentials of delegates. Rule 16(d)(2) only allows registered Republicans to participate in their primaries or state conventions, but 12 states now have “open primaries,” which allows anyone to participate. He said that it might be difficult to find a majority of delegates from eight states or territories, Rule 40, to officially put a candidate’s name in nomination.

“The only thing that matters is what the Rules Committee adopts” once the convention begins, he said. “This is the greatest hoax ever.”

As you can imagine, Haugland’s analysis doesn’t go over well with longtime students of the nominating process, such as TheGreenPapers.com or the RNC’s staff—which would not comment for AlterNet.org.

“The last thing the Republican Party as a national political entity would want is such disunity,” wrote Berg-Andersson. “Both Major Parties are still very much haunted by images of such things as ‘Democratic National Convention, Chicago 1968’—even as fewer and fewer people actually old enough to remember 1968 are within the leadership cadres of both Parties… Rules are one thing; common sense ‘throwing the Rule Book out the window’ is quite another!”

Next July is a political light year away. Many unforeseen things will happen. But if the Trump juggernaut continues through this fall, pay attention to how the party bosses may try to tilt the 2016 caucus, primary and state convention rules to impede his path to the nomination. And should Trump emerge with the most delegates after 2016’s contests, you can be sure that the very RNC leaders who are doing their best to now ignore Haugland will be studying his analysis very, very carefully.