Between Hillary on "Fallon" and Jeb on "Colbert," we've been inundated with horrible political interviews lately 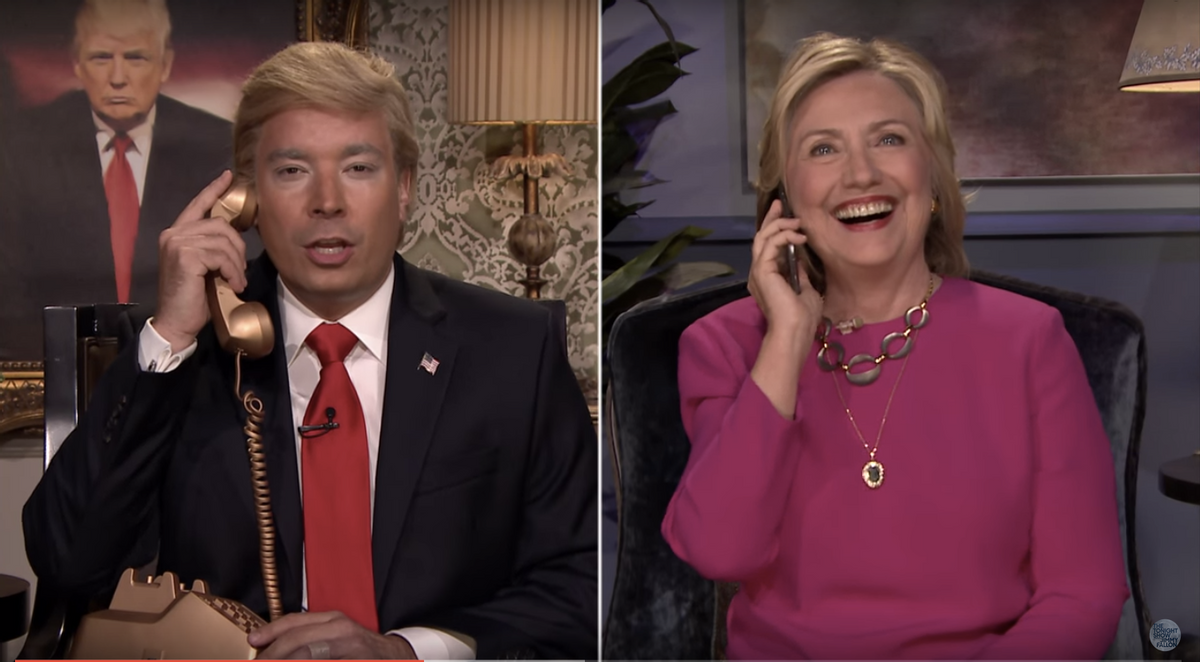 Of all the many humiliating things presidential candidates have to do, going on talk shows might be the most painful one—at least from the audience's perspective.

The reasons politicians go on these shows are extremely well documented by now: they "humanize" people, they show them in a different light, they reach a different crowd, blah blah blah. The presumption, I guess, is that when a random person in the middle of the day suddenly sees Scott Walker laughing it up with Steve Harvey (or whatever), they'll go, "Wow, maybe I don't think Scott Walker is a ridiculous joke, passing himself off as both an identifiable humanoid life form and as a legitimate candidate for the presidency! Look at his laugh!"

I, for one, wish no politician would ever darken the door of any talk show host. It would save us all a fair bit of misery. But that is a battle I shall never win, and because I am a self-loathing masochist, I've been watching a lot of the appearances that the 2016 crowd has been making on these shows.

The one thing that almost all of these segments—from Hillary Clinton and Donald Trump's trips to the "Tonight" show to Jeb Bush and Bernie Sanders' get-togethers with Stephen Colbert—is their utter pointlessness. They're not interesting, they're not funny, and yet if the candidates avoid them, the press will talk about how scared they are of dealing with the supposed bear pit that is the talk show circuit.

Luckily for them, the talk show circuit is hardly a bear pit, especially if you're going on the "Tonight" show. Jimmy Fallon gets antsy if he has to "talk" to people for too long, so his strategy is to get them to do a bit. Both Trump and Clinton did little sketches with him, and the genial way he allowed them to trot out their well-worn talking points showed that Fallon is the true heir to Jay Leno, in substance if not in style.

In a sign of the limits of Fallon's political imagination, both sketches featured his impersonation of Trump. In one, he and Trump sit on opposite sides of a mirror as Trump "interviews" himself. How will Trump create jobs? "I just will," the real Trump says. Hilarious! In another, Fallon-as-Trump "interviews" Clinton-as-Clinton. Sample Clinton dialogue: "America was built by people who came here, they worked their hearts out for a better life!" (She also makes fun of his hair. And she smiles!) Thank god Hillary Clinton finally got a platform to say that!

Fallon's actual interviewing technique is just a cut above. His probing of Clinton's email scandal lasted about 90 seconds before he moved on to selfies.

All in all, Fallon was a wise choice for Trump and Clinton. Too bad Jeb Bush didn't get the memo. His total lack of charisma combined with Colbert's hopped-up antsiness (it was the first night of his new show) combined to make for a totally weird encounter. Colbert seemed determined to be "substantive" but never was; Bush seemed determined to be jovial but never was. His solemn comment that he chose his "Jeb!" slogan because it "connotes excitement" was as good a eulogy for his campaign as we'll ever get.

The one man who sailed through his talk show appearance and came out neither embarrassed nor wounded was Bernie Sanders. He came out, barked out his talking points, didn't try to be funny, the New York crowd predictably ate it up, applause rained down, he left, done and done. Now that's how you do it. Either everybody should act like Sanders or we should just ban the talk show appearance altogether. There are no other choices.