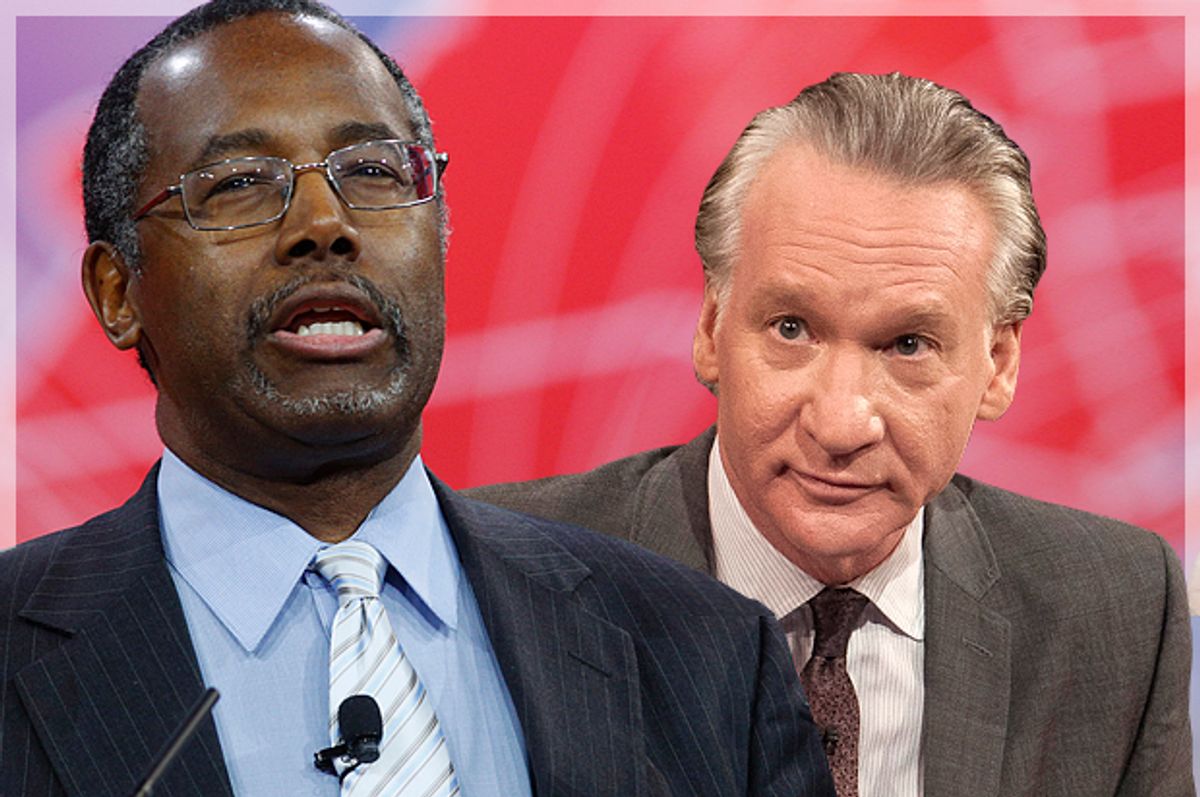 It was a moment to take the breath away. Ben Carson, a Republican candidate for the presidency, was telling NBC's Chuck Todd that not only did he never want to see a Muslim become president, but he didn't even think Islam was "consistent with the Constitution."

This was Todd's response to that moment: "And I take it you believe the president was born in the United States and is a Christian?"

"I believe that he is," Carson said. "I have no reason to doubt what he says."

"All right, Dr. Carson, I will leave it there," Todd concluded. "I look forward to speaking with you again soon."

If I could invoke Jon Stewart for a second: Uh, can we please not leave it there?

The most generous reading of Todd's encounter with Carson is this: Todd was letting Carson, a relatively unimportant player on the political stage, hang himself by letting him spout his fringe views essentially unimpeded. No serious person would ever take this kind of stuff to heart.

But here's the thing: Tons of people do, in fact, take this kind of stuff to heart. As the Washington Post pointed out, fully 38 percent of Americans have said they wouldn't support a Muslim candidate for president. The only kind of person Americans disdain more are atheists and socialists.

Then there are the still-respectable people like Bill Maher and Richard Dawkins who are allowed a place in our elite conversation while indulging in the most detestable kinds of bigotry. Just this past weekend, Dawkins mused aloud about whether or not Ahmed Mohamed— the Texas teen arrested for bringing a clock to school—actually wanted to be arrested to get some attention. (He also scoffed at the 14-year-old boy for saying he'd invented the clock he'd made at home. Classy, Richard!)

Maher also weighed in on the Mohamed scandal. Predictably, he was on the side of the skeptics, saying,

"Over the last 30 years, if so many young Muslim men—and he’s young, 14, but that’s not like it’s never happened before—hadn't blown a lot of shit up around the world... and this guy, this kid deserves an apology, because he wasn’t one of them… For the last 30 years, it’s been one culture that has been been blowing shit up over and over again."

One guesses that people in all the countries blown apart by American and NATO bombs over the past 30 years might take issue with Maher's comment.

The point is this: These people are not raising interesting-if-edgy points. They're not contributing to the dialogue. They are trafficking in hatred, racism and xenophobia, and they are getting away with it. And that has to stop.

Imagine, for a second, if Carson said the following: "I don't think Judaism is consistent with the Constitution, and I don't think a Jew should ever be president."

Would Chuck Todd have "left it there" if Ben Carson had said that? I think he would have torn up the next five minutes of his show and demanded that Ben Carson account for such a nakedly bigoted statement. I think his heated denunciation of Carson's views would have rocketed around the internet. I think he'd be putting it in his highlight reel.

Don't Muslims deserve that kind of support? Shouldn't someone's intolerance towards Muslims be the first, second and third thing that they get asked about? Shouldn't people who say such horrible things be treated with the same kind of revulsion as anti-Semites or white supremacists?

Donald Trump also made the Sunday talk show rounds, appearing (by phone, of course) on "Meet the Press," "This Week" and "State of the Union" a few days after he let a man in an audience of his proclaim, "we have a problem in this country, it's called Muslims."

All three shows referenced this line, but only CNN's Jake Tapper even attempted to seriously grapple with Trump about it.

"This is raw, unvarnished, ignorant bigotry," he told Trump. "You are a leader. You are the frontrunner in the Republican race. Do you not have a responsibility to call out this hatred?...What if he had said, 'we have a problem in this world, it's called blacks?' Would you have said something then?"

Bigotry. Hatred. That's what we are dealing with here. Bravo to Tapper for not letting this stuff slide by, and for not being afraid to call it what it is. More journalists need to start treating this anti-Muslim racism with the repugnance it merits—and treating the people who spread it with the contempt they deserve.